D is for Dogs, Devon and Defecation

Today, while walking Dog, I scuffed some autumn leaves, a joyous childish game that took me back to… my memories crashed against reality as that oh so familiar smell stopped me in my tracks. In amongst the crunchy foliage a canine had laid a turd shaped trap that now coated my boot. Different memories now competed for space as I cursed both dog and owner…

Devon is a beautiful county positioned perfectly for a family holiday. It has gorgeous coasts, the unique and desolate Dartmoor with its ponies and Prison (just in case the children are particularly awful) and plentiful walks, and many many attractions. From when the children were tiny through to when we decided holidaying further afield worked, we took one or two weeks in Devon as part of our summer’s break.

Not long after we started these sojournes, we found a village called Kingston near Buckfast (famous for its Abbey and their brain rotting tonic and honey to die for, as well as its butterfly farm and steam, and model railway). Kingston really just comprised the Manor House, outbuildings and a few farms. Some of those outbuildings had been converted to holiday cottages and we rented one for our small family. 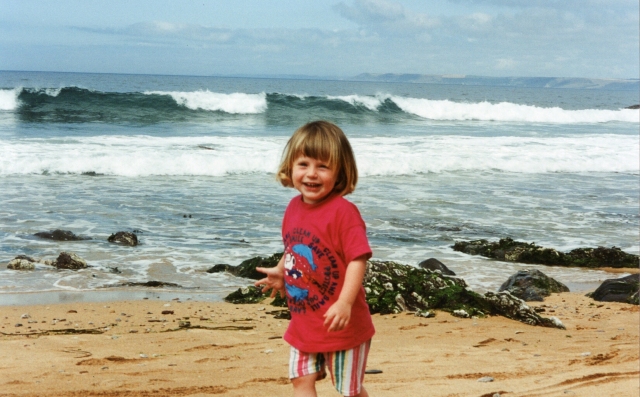 At the end of that first week we were told by the owner that he was selling timeshares and were we interested. We mulled it over. We knew we would come back for several years and agreed to buy one week in a four bed cottage for 25 years, the week to commence at the start of the school summer holidays. We reasoned we would probably do ten years and maybe sell it on. In the meantime we could bring friends or family and fill the other rooms.

One year we brought mum and dad. This was the first time I showed my propensity for travel incompetence. Dick Head Tours was born. I was asked about how the term came about and here is a post I wrote explaining it.

It was an idyllic spot. The road to the house and grounds was a steep, a one in three hill. At the top, left or right you could see for miles. The roads were blissfully empty and if you wanted there was an undulating course of about four to four and a half miles through gorgeous fields, across steams and up past the local church.

For those who don’t know Devon, its hedgerows are, if not unique, uniquely impenetrable. They are tall and you cannot see oncoming traffic except (a) if you happen to be higher up and can look down onto the winding tarmac or (b) when the other car is wrapping itself round your bumper.   As a driver you go verrrrrry slowly unless born within the county boundaries when you drive with a faith based on some obscure deity that miraculously keeps you safe. As a runner, taking in the clean country air – that was me back then – you keep your fingers firmly crossed and try and take as many off road opportunities as possible.

This particular day was sunny after overnight rain. The tarmac was steaming in the heat that was lapping over the hedges even at eight in the morning. I could have sung to myself so happy was I.

After the climb from the cottage the first bit of road, about half a mile, took me past a few houses and a farm entrance. A tractor waited until I had jogged past before pulling out. It would have been a challenge to get past and no runner fancies backtracking even two hundred yards to find a gate. My lucky day? Hmm, you be the judge.

I was now on a footpath, dodging puddles where I could, loving the insect buzz and the isolation. Out once more onto the road, this was the safest section as it curved downhill. I could see what was coming and, as importantly anyone behind me could see me bobbing along like a little moustachioed cork.

As I curved round a long left hander I spotted a figure on horseback up ahead. He was an odd sight, as he appeared to float along on the top of the hedgerow. However in my experience riders hereabouts were cheerful and courteous and I looked forward to sharing a little of my bonhomie with him.

We gradually approached each other, he from a side road and me down the hill. He reached the junction about one hundred yards in front of me. In the field next to us a tractor ploughed back and forth.

The tractor noise, the blood pounding in my ears they all deafened me to the reality heading my way for this was no ordinary rider. This was the whipper in, the member of the hunt responsible for the hounds. I ground to a very rapid halt as, following the rider round the corner came the pack of dogs, tumbling and twisting across, under and on top of each other.

The rider held up his crop. ‘You ok with dogs?’

‘Ok. Then pull into the hedge as far as you can and get as high as you can.’

‘Should I go back?’ There was a gate some quarter mile up the road.

‘Not if you don’t want them chasing you. These are still learning.’

So I reached high for a branch and pulled myself up. I was about four feet up the bank when the first dogs reached me. They scrabbled over me and each other. A couple, essayed licks at my face but I managed to dodge them.

As they passed the rider grinned and rode on. He seemed happy.

It was only then I looked down and at the same moment registered that very obvious dog crap smell. It was coming from me. I was smeared from my new Nikes to the collar of my formally white T shirt in canine faeces. I learnt later that hounds cannot stop for a discreet number twos and have to be trained to go as they run. Any object in their way is likely to benefit from such excretions.

The last section home was not so jolly. The kids thought it disgusting. I was with them. The Textiliste? Well what do you expect? Sympathy? No, a cold bucket of water and old rag and soap. I never really enjoyed that run again.

My name is Geoff Le Pard. Once I was a lawyer; now I am a writer. I've published several books: a four book series following Harry Spittle as he grows from hapless student to hapless partner in a London law firm; four others in different genres; a book of poetry; four anthologies of short fiction; and a memoir of my mother. I have several more in the pipeline. I have been blogging regularly since 2014, on topic as diverse as: poetry based on famous poems; memories from my life; my garden; my dog; a whole variety of short fiction; my attempts at baking and food; travel and the consequent disasters; theatre, film and book reviews; and the occasional thought piece. Mostly it is whatever takes my fancy. I avoid politics, mostly, and religion, always. I don't mean to upset anyone but if I do, well, sorry and I suggest you go elsewhere. These are my thoughts and no one else is to blame. If you want to nab anything I post, please acknowledge where it came from.
View all posts by TanGental →
This entry was posted in Devon, dogs, humour, miscellany and tagged Buckfast, Devon, dogs, holidays, humour, hunt, Kingston. Bookmark the permalink.

49 Responses to D is for Dogs, Devon and Defecation