Dad, trusty pipe still in place and the Archaeologist take me for a stroll on the prom, circa 1959

Every holiday from my earliest memory meant a visit to my mother’s mother – my Gran – who lived in a tall Georgian terraced house on the sea front at Herne Bay in North Kent.

I could wax lyrical describing it by saying, even then its best days were behind it. There was the pier, second in length to Southend and the promenade; the winter gardens and the clock tower and… lots and lots of pebbles. At low tide, sand – acres of it – appeared and we could go wandering but it wasn’t the yellow-orange-hued granulated stuff of beach holidays in pictures and films that lends itself to healthy beach volleyball and sandcastles Rather it was a grey-brown claggy sludge they use to fashion bricks in films like Bridge Over the River Kwai and which stuck to everything and occasionally became a sticky gripping pool that you did well to exit right sharpish before it sucked you in. 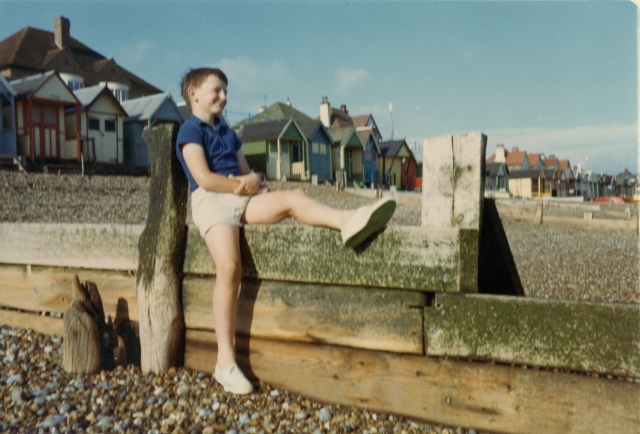 Or I could tell you it had a finger post on the sea front pointing due north and indicating there was nothing between you and the North Pole. I’ve only ever seen icebergs once in my life around the English coast and that was in the bleak and dreadful winter of 1962/63 in the sea outside my Gran’s house. 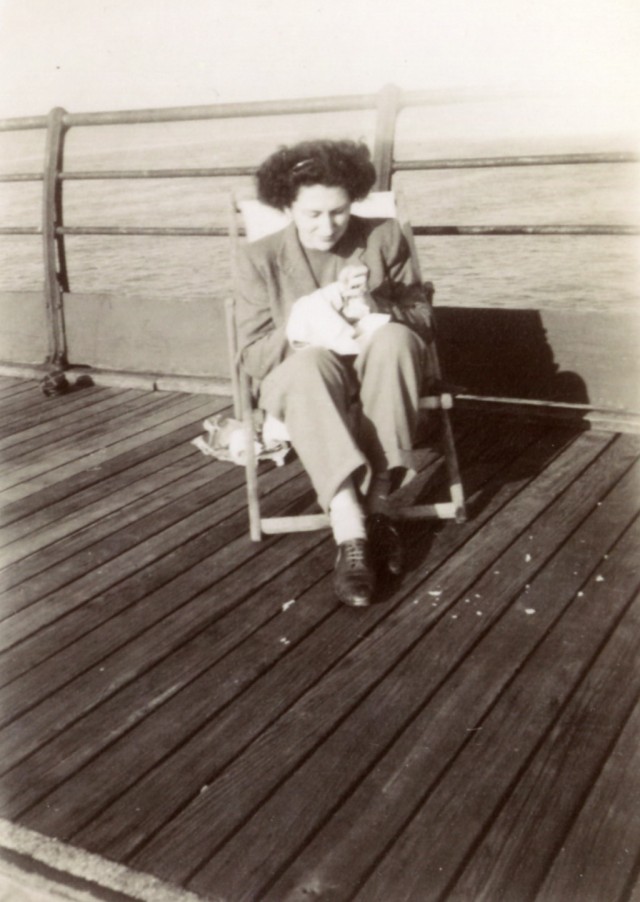 Mum on the pier

I don’t have a distinctive earliest memory because I was always there for the holidays, in my mind’s eye, and all those early occasions have coalesced into one slideshow of sun-filled sepia images, wrapped in blankets.

My earliest memory is probably walking along the pier, mostly because it was so long. In two places the wooden boards rose to form arches, like small bridges. I recall being told this was done in the War to stop German planes landing on it. 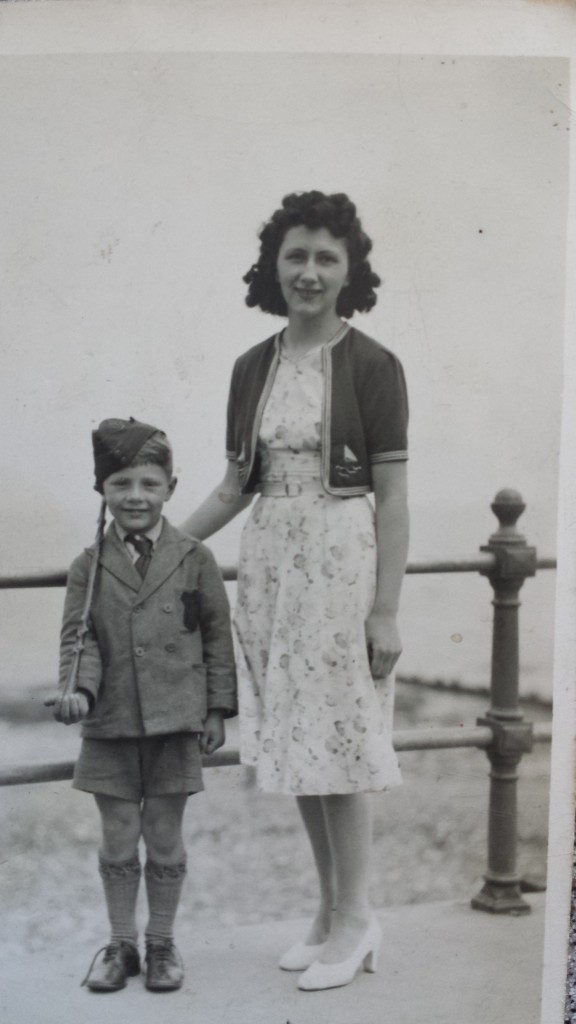 Now that seems highly unlikely; back then, less than 15 years after the War ended it seemed glamorous and thrilling. 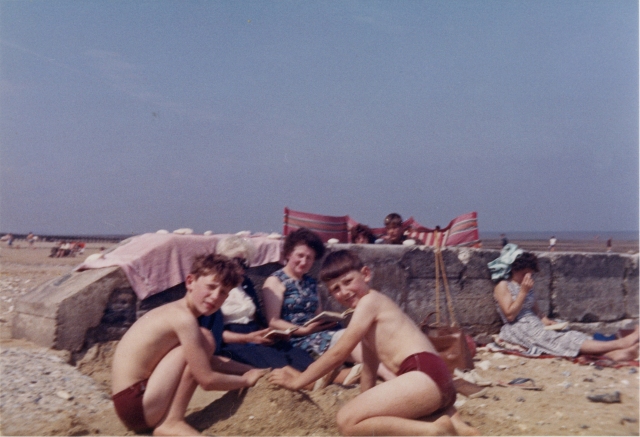 We collected shell fish to eat: mussels off the breakwaters and cockles raked out of the mud at low tide. These gritty morsels, eaten with fresh crusty bread were a treat denied me today as a result of a late flowering allergy. At least the memory is sharp. 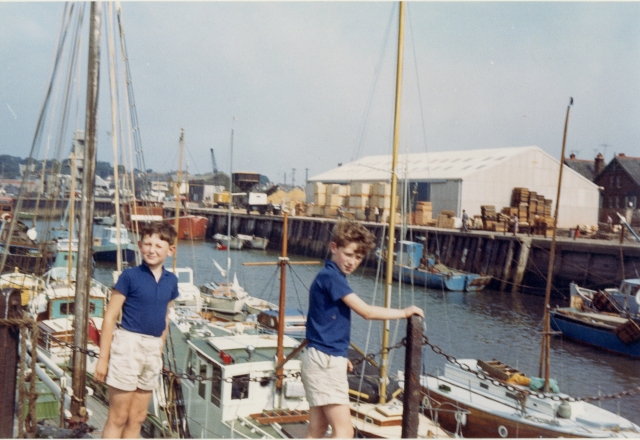 Whitstable harbour, just along the coast where we ate winkles as a treat for being good visiting Aunt Rose and Uncle Jock

At some point we, the Archaeologist and me, graduated to a stage where we were trusted to be alone with Gran for two weeks at Easter. Gran loved us dearly but couldn’t be doing with any sort of hands on child care. We were fed breakfast – always our favourite choice of cereal – and pushed out of the front door. On sunny days we’d head for the cliffs towards Reculver in the hope of fossils. Clouds and drizzly days had us in the library where eventually the Archaeologist found me something I enjoyed reading; and on foul gale swept days we would be on the promenade, as huge waves crashed over us and terminally stupid seagulls tried to put out to sea – how we weren’t swept away has much to do with luck.

This being a coastal resort, albeit one with a faded glamour, there was a coffee bar playing the latest tunes – Macari’s – which had whirly whip ice cream and chocolate flakes. It also served its coffee in trendy glass cups – I didn’t drink coffee back then – I tried, like I did everything dad liked because I wanted to be like him (all his favourites – beer, coffee, tea wine, grapefruit  – made me gag, tasting as they did like the distilled essence of brother)  – but I loved those see through cups.

My favourite ice cream was a vanilla slab (Walls not Lyon’s Maid) in between two wafers. You were limited to vanilla or Neapolitan – vanilla, strawberry and chocolate in strips. I loathed the chocolate ice cream  as I recall, arguing it gave me a headache. Odd that I had the hypochondriac’s excuse off pat even aged seven.

I have too many memories really to do justice to this piece though as a selection:

Best of all, Gran’s house tended to fill with people. My youngest uncle lived at home in those early days and was a wild child – so inevitably hugely glamorous to the Archaeologist and me. There were battle going on behind the scenes of which I was blissfully unaware for many years.

Later, beach holidays lost their allure, well until I met a certain young lady who took me to great Yarmouth for the day. Clearly, if this picture is anything to go by, she had a way with words

Wait until I catch you…

And then it was the kids and their love of the beach  the circle of life, huh?

A lovely image though desperately poignant too as the young man next to the Lawyer tapping the Vet’s head, Sam H-B died running the Brighton marathon a couple of years ago. RIP Marco

My name is Geoff Le Pard. Once I was a lawyer; now I am a writer. I've published four books - Dead Flies and Sherry Trifle, My Father and Other Liars, Salisbury Square and Buster & Moo. In addition I have published three anthologies of short stories and a memoir of my mother. More will appear soon. I will try and continue to blog regularly at geofflepard.com about whatever takes my fancy. I hope it does yours too. These are my thoughts and no one else is to blame. If you want to nab anything I post, please acknowledge where it came from.
View all posts by TanGental →
This entry was posted in family, holidays and tagged family, Herne Bay, holidays. Bookmark the permalink.