Walking With The Wind At My Back: Part Four

This is the fourth part of my walk that I undertook with my father and friends across England from Coast to Coast. Part three is here. You can link back to the earlier posts from there. 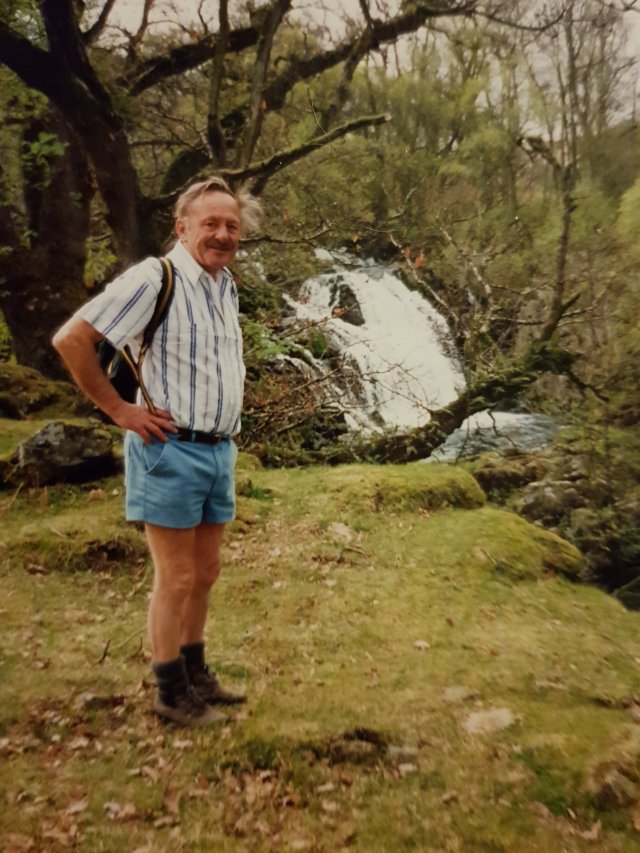 When we left Kirkby Stephen we felt great. It was overcast after some glorious days and we all wore our anoraks – topic of much debate between us over the fortnight. But we had a delightful packed lunch and, whisper this quietly, mid morning cake, something that the isolation of our walking amongst the glorious rooftops of England denied us. After all, even for a nation of shopkeepers anyone would  have to been a couple of two-for-ones short of a lost leader to have set up a cafe where we’d been.

What we hadn’t foreseen was how unutterably cold the weather would become in a few short strides. One minute we were in a lush valley admiring the grey granite-like stone work of the buildings, our coats flapping open,  and the next we were on an exposed slope that was colder than Petty Patterson’s stare if you spoke in his Biology class. Dad wore shorts under his jacket and even his famed ability to overheat at even the mildest of slopes was challenged and found wanting as we approached Nine Standards Rigg. 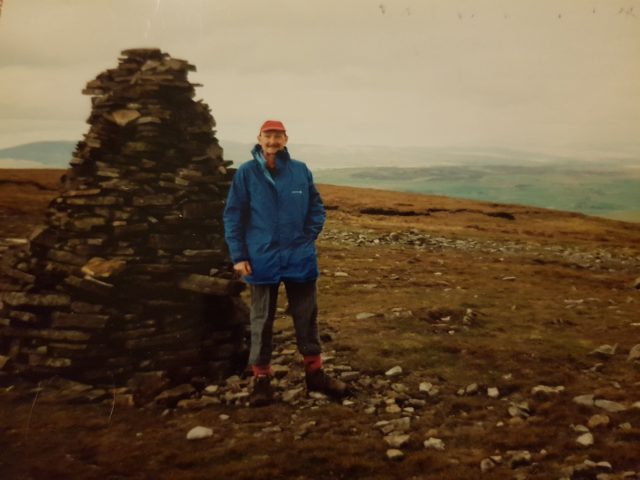 The Nine Standards are nine enormous cairns whose origin is not known. Whoever commissioned these not so tricky to build monuments must have had a similar ego to our former London Mayor, Boris Johnson when he commissioned the Orbit for the Olympic park. Artistically it has little merit, economically it barely approaches paying its way and aesthetically it looks like some giant has dropped his trombone. Purists may quibble at the comparison and maybe these heaps of stone left me cold because I was exactly that but as monuments go they’re a touch second rate. Not like, say, Stonehenge or Silbury Hill.

Still they did mark the tipping point of our walk, the high watershed on the Pennines. From the boggy quaggy peat hags that made our walk a challenge in dry footwear the watershed of the Pennines drains the water to the West which goes to the Irish Sea while a few hundred yards to the East the water begins its inexorable descent to the North Sea. Thus both we and the water were flowing in the same direction at last.

By the time we’d lunched at Keld, an isolated spot where we sheltered behind a wall and ate our still excellent sarnies we had crossed the Pennine Way. In my memory this was an awful path, deep cuts from too many feet scarring the soft surface and making black oily traps between tufts of sad looking heather. In contrast the Coast To Coast path seemed solid and set fair. We’d made the right choice here.

After Keld Ernie, our main guide offered a choice. We could join the Swale, a delightful river and follows its banks to Reeth, our next stop enjoying what all the books described as a picturesque joy; or we could do what our mentor, Wainwright offered as the better alternative and climb to the ridge line above Swaledale and pursue our adventure via old miners tracks. Here we would see the remnants of the once thriving lead mining industry of Swaledale, with its abandoned mine buildings and scraped and damaged landscape and try and imagine what life would have been like for the men and families that survived here as miners.

We went high and we weren’t disappointed. It’s difficult to describe the contradictions of our afternoon. One minute we were in amongst some of the most delightful of Dale country with its rowan and heather and rock falls and splashing streams feeding the Swale; the next a dark satanic mill of Blake’s imagining filled our view set against next some deep, clearly manmade gully of spoil and underrock on which nothing grew nor, most likely had grown since the poisonous mineral that was the reason for the working – the lead – was first exposed. The Rivers, The Land, Nature itself, everything was polluted by this effort. I grew up when lead was still in paint, on roofs, in petrol, in water pipes. The soft malleable material made it perfect for working and as an additive it was second to none. Yet the impact of lead poisoning had been known for a long time.

The walk was sobering as we took in the spoil heaps, the dessicated slopes, the sterile landscapes. If nature was going to claw its way back – and these mines have been redundant for over one hundred years – it was going to take a long time.

All in all it had been an odd day, chilling us both physically and emotionally. And yet the abiding memory is of that beautiful river, the Swale. Something to cling to perhaps.

The next morning it rained. Briefly, irritatingly and horizontally. For thirty minutes we puffed and huffed in single file, the muggins at the front – me – acting as a windbreak to my aged companions.

‘One of you want a turn?’ Maybe I bleated a little.

‘You’re doing fine.’ My father’s voice was cheery, with encouraging afternotes that to my thirty something ears felt rather close to patronising.

Ernie began to step forward only to be stopped by the old bugger. ‘It’s ok, Ernie. He wants to lead. And any way, you don’t keep a dog and bark yourself.’

This was the first real test of the waterproofness… hydrosity? Of our new anoraks. The windproofness… ventrosity? Had been tested almost to destruction on the Pennines. But this was what they were made for. ‘Mine’s pretty good,’ Dad had a gortex, a boggy green thing that hung low enough to keep his posterior toasty, ‘though it doesn’t so much wick away the sweat as channel it.’ Ernie had a Peter Storm which he swore was the best money could by but it was noticeable that after each significant climb or a heavy shower, like now, he squirmed a fair bit and tended to be wearing a different patterned shirt after the next break. I had this bright blue thing with a useless hood and a name like a sea breeze, which I think is also a cocktail and which, under pressure from spilt coffee on day one had impersonated a teabag… and yet, up here, in the Dales, performed as well as any.

‘You know my jacket’s crap. Remember the coffee?’ Dad looked at Ernie who nodded. I went on, ‘And you guys are swearing your coats are the best.’ Ernie pursed his lips, and dad dropped his gaze.

Without saying anything Ernie moved ahead and I fell in at the back. There aren’t many life skills you learn as a lawyer, but telling a convincing porky pie is one of them. 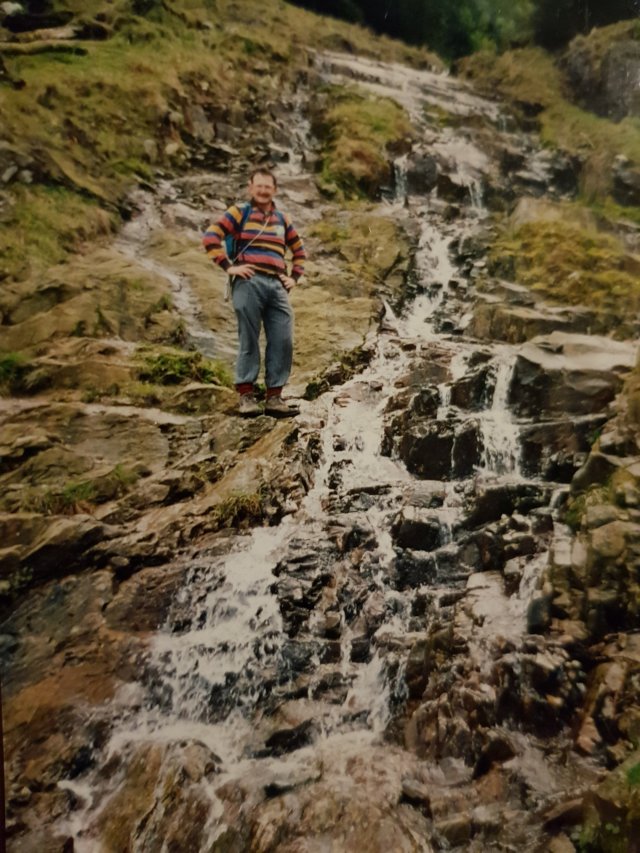 The Dales are a neatly counterpointed sandwich filler between the monumental Lakes and the more brutally lumpen though awesome North Yorkshire Moors. They have their ups and downs, they garner the floriferous and picturesque moments by the score but they undulate subtly rather than stun by their grandeur or imposition. The Swale and Ellen Beck sliced neat wiggles across our walk, the rain eased and jackets came off as the heat came back into the day. We passed through small towns – Marrick and Marske – and merely enjoyed the soft undemanding effort. In no time really, we dropped down the slope and entered Richmond.

Richmond is quintessentially the Dales. James Herriot, a Vet of some reknown, could easily have been climbing out of a Morris Oxford as we entered the town centre and headed for the ever widening Swale again.  It felt like we’d stepped back in time, to the 1930s when men wore trilby hats and the woman were stern faced with hair and bosoms tightly corralled by head scarfs and blouses of a fearsome aspect.

We were early so we strolled around the town, awaiting our friends and the lift to the pub we were staying in. Tomorrow we would leave the Dales for a dull day of drab walking around Catterick army camp before the ascent into the Moors. Meanwhile the boys had some beer to sample….

My name is Geoff Le Pard. Once I was a lawyer; now I am a writer. I've published several books: a four book series following Harry Spittle as he grows from hapless student to hapless partner in a London law firm; four others in different genres; a book of poetry; four anthologies of short fiction; and a memoir of my mother. I have several more in the pipeline. I have been blogging regularly since 2014, on topic as diverse as: poetry based on famous poems; memories from my life; my garden; my dog; a whole variety of short fiction; my attempts at baking and food; travel and the consequent disasters; theatre, film and book reviews; and the occasional thought piece. Mostly it is whatever takes my fancy. I avoid politics, mostly, and religion, always. I don't mean to upset anyone but if I do, well, sorry and I suggest you go elsewhere. These are my thoughts and no one else is to blame. If you want to nab anything I post, please acknowledge where it came from.
View all posts by TanGental →
This entry was posted in memories, miscellany, walking and tagged Coast to Coast, memories, walking. Bookmark the permalink.

29 Responses to Walking With The Wind At My Back: Part Four