Where The East Begins #capitalring #walking

A week or so ago, I wrote about a wander with the APE when we did a section of the Capital Ring, a circular walk around London that aims to take in as many of the green spaces as possible as the route snakes from east to west and then crosses the river Thames to go back west to east. 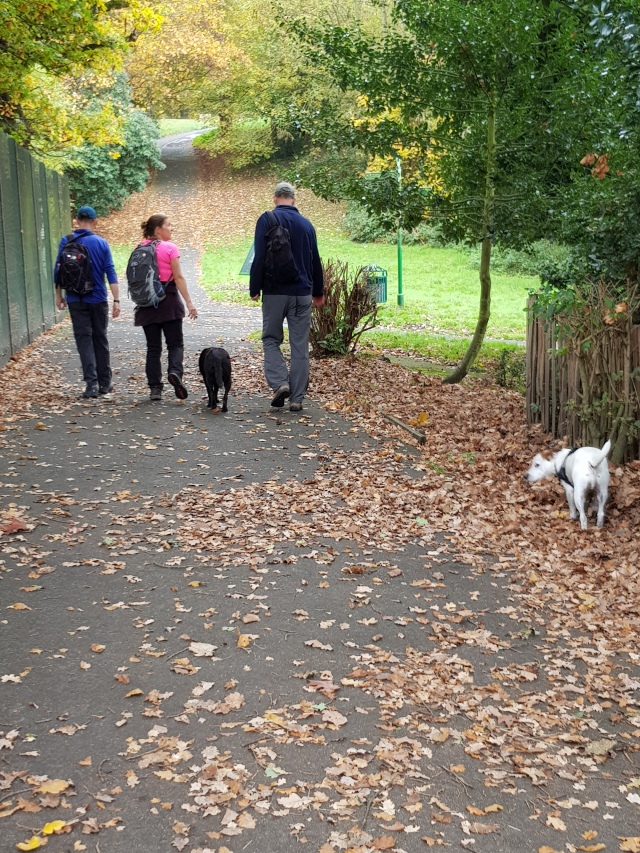 A group of friends and I decided we’d do another walk, this one comprising three sections, from the official start of the Capital Ring, on the river at Woolwich to near my home at Crystal Palace. It’s a fair way – officially 17 miles but with the bit at the start from the station, and at the end nearer 18. It’s November (who knew?), the clocks have done their falling back thing and so the evenings are ‘closing in’ as my gran used to have it (is it me but does the concept of ‘closing in’ seem a little sinister, like the siege is about to be mounted by winter’s monstrous forces of darkness or some such) so, any way, we didn’t want to be out in the dark, because, well, mostly because they shut the parks and we could be trapped.

Getting to Woolwich necessitates a two stage train journey that lasts about 50 minutes. On part one, into the City (London Bridge station to be precise) I knew I would be sharing with commuters. As would Dog. Now readers will know Dog is

He sniffs. He’s also predominantly white haired and people who work in London are often clad in black or blue. A combination of his ineffable attractiveness, his need to sniff shoes and legs and people’s willingness to stroke him means… let’s just say that a couple of commuters left the train smiling but with an asymmetric herringbone pattern on the back of their legs.

My fellow walkers have known me for many years, all former work colleagues. Yep a group of ex lawyers, collectively an Invoice. The one way you know someone is a lawyer is his or her inability to (a) be punctual (b) use time wisely and (c) do as they are told. Consequently if we were to make the mileage I had to be ruthless, get them underway, hold them to a strict three mile an hour pace.

They settled into the cafe and began to reminisce. Buggers, the lot of them. 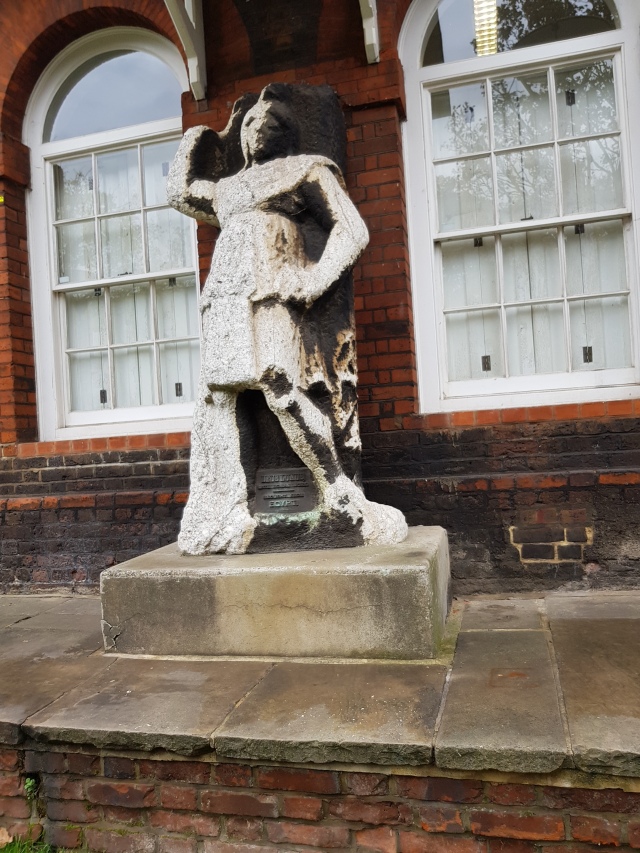 Eventually, twenty minutes and a rather decent cappuccino later we headed for the river through the former Royal Arsenal at Woolwich. This was the place where the British army made its weaponry and, when it was going abroad to some far off land to try and bring the benefits of civilisation to some dusty speck of the planet in the name of all that was good (the aggrandisement of the British exchequer mostly) the place where the troops would muster before collecting said tokens of peace (muskets, rifles, artillery and all things whiz-bangery) and boarding ships to set off wherever.

The buildings are rather splendid, now that they have been converted into museums and residential palaces; the sculptures, no doubt put up by the developer to show his cultured credentials, frankly bonkers; but the good thing about the walk is it takes you to the River.

The Thames here, just down stream from the barrier is murky, fast moving and pretty unappetising. The banks either side still have signs of the previously industrial past, mingling with the increasing amount of expensive penthouse accommodation. But for all the acne scars of pollution and uncaring commerce, I love it.

The walk officially begins at the Victorian foot tunnel – there is another at Greenwich,which I wrote about a while back with a short story here  – which is accessed by a set of stairs from the red brick rotundas on either side. If you do ever try it out then prepared to be spooked. It’s long, clad in those white glazed tiles that make you wonder if you haven’t stumbled into the longest urinal in Europe and poorly lit. Brilliant.

After the entrance you hug the riverside, looking at the troll-like shapes of the Thames flood barrier supports – if there is a tide that might cause damage upstream, huge hydraulic gates can rise and protect the expensive real estate of London. It’s an impressive piece of engineering, you can visit and see how it is meant to work and ponder, as I often do, whether  these things that have been built against a problem that has yet to happen (well, London has flooded, natch – in 1953 badly with the loss of many lives, for instance) will they actually work?

Our path cur across the access ramp to the Woolwich car ferry, the only ferry of its kind across the Thames. Only it isn’t just now, because both of the ferry boats are out of action. Shame. If you don’t mind a little queuing I used to like that crossing. Something oddly un-metropolitan about it. Like going to a Scottish island. 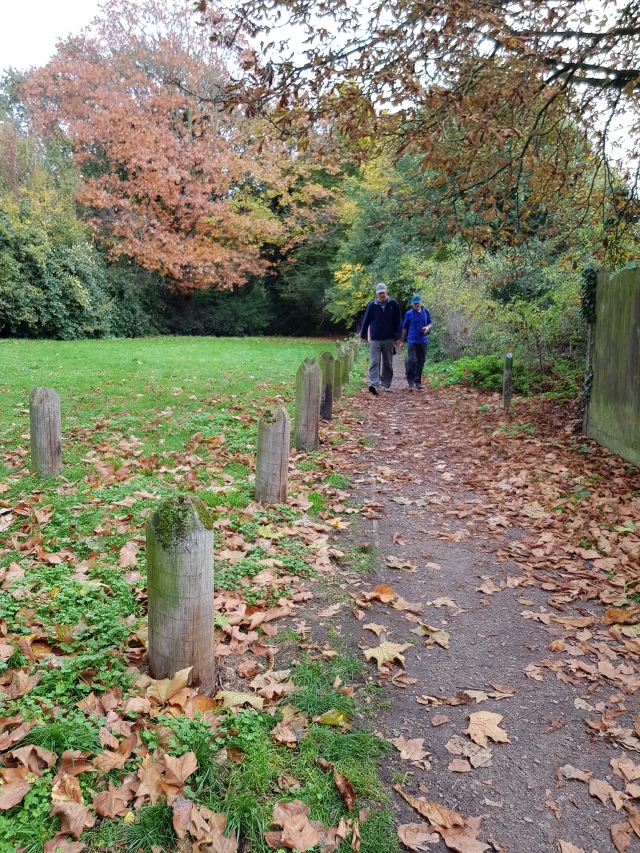 Onwards we trudged and after a mile headed inland for Maryon Wilson park. This is the first of several parks this one including a petting zoo and the first of many autumnal trees, the leaves, finally after weeks of waiting, turning to the yellows and golds we had been anticipating.

I was teased pretty constantly whenever the landscape turned especially urban and derelict or the parks were bland and scrappy. This is East London. South East London. It’s always been tatty. East of a city = poor because the prevailing winds blow the shit that way so the posh live to the north and west. London is no exception to that truism.

We plodded towards Woolwich Common, the spot where the musters of the armed forces took place during the 18th and 19th centuries.

Ahead was Shooters Hill, home of ne’er do wells, highway persons and footpads, but now part of Oxleas Wood and Common and a rather glorious mix of deciduous trees burnishing the horizon even on a gloomy morning such as this.

And as we sucked in air for what, my book told me, was the highest point of the whole of the Capital Ring at 410 feet above sea level we came on this splendid monument to an English Captain, a triangular folly named after a fort in India which the said captain captured and folly which was erected to mourn his passing. You can climb it nowadays (weekends when it’s open, sadly) and, weather permitting see across to the hills on the north side of the river basin and to the North Downs in the South (which isn’t as nonsensical as it sounds).

This folly thingy is Severndroog Castle. Such a splendid, Gothic horror of a name. It’s nothing like a horror, but still. We walked around the base. The dogs – there were two, Dog and faithful Lolly, who seemed to get on with each other with a studied indifference that meant we didn’t have to worry about them. Dog can be a bit precious with other dogs in attendance; Lolly is a Labrador so congenitally incapable of concentrating on anything except food. We stopped at a cafe for cake and a pretty crap coffee (shame, and I had so looked forward….) stared South to those North Downs on a murky ridge some thirty miles distant and headed off through the remnants of some ornamental gardens for a stately home long since pulled down. 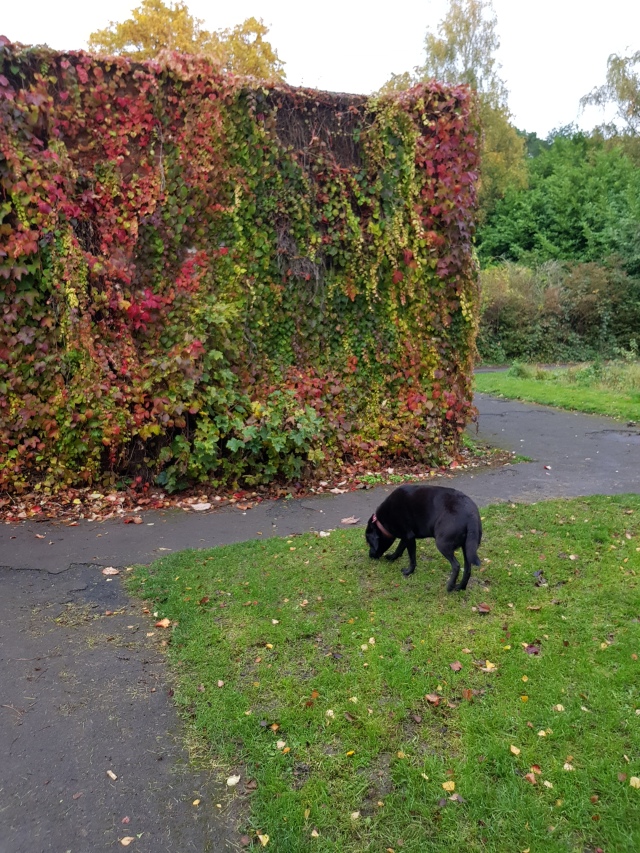 There is something rather sad about the outlines left by such garden in the carefully crafted brickwork. Ladies carrying parasols are much missed. 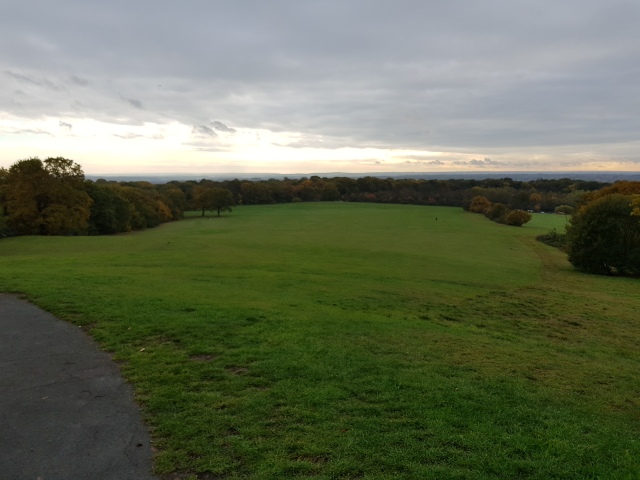 Our paths wended south as we headed across the busy carriageway of the A2 and the Old Rochester Road and on into Eltham Park North followed by the same but suffixed ‘South’ Neat, grassy with good views back to the city but rather formless and lacking in character.

Good for routine dog walks and airing pent up children. We had more fascinating things to see and we needed to make progress….

My name is Geoff Le Pard. Once I was a lawyer; now I am a writer. I've published several books: a four book series following Harry Spittle as he grows from hapless student to hapless partner in a London law firm; four others in different genres; a book of poetry; four anthologies of short fiction; and a memoir of my mother. I have several more in the pipeline. I have been blogging regularly since 2014, on topic as diverse as: poetry based on famous poems; memories from my life; my garden; my dog; a whole variety of short fiction; my attempts at baking and food; travel and the consequent disasters; theatre, film and book reviews; and the occasional thought piece. Mostly it is whatever takes my fancy. I avoid politics, mostly, and religion, always. I don't mean to upset anyone but if I do, well, sorry and I suggest you go elsewhere. These are my thoughts and no one else is to blame. If you want to nab anything I post, please acknowledge where it came from.
View all posts by TanGental →
This entry was posted in capital ring, Friends, London, miscellany, walking and tagged capital ring, Crystal Palace, maryon wilson park, military history, Thames, woolwich. Bookmark the permalink.

29 Responses to Where The East Begins #capitalring #walking