Crowing About Everything #scarecrows #halloween #shortstory

Scaring Crows. Dog really doesn’t like Crows. Mobbing cloaked things who should be intimidated by a dog but somehow really don’t give a toss.

So when someone says they’ll scare Crows, well, Dog for one wants to see, to applaud. This week, in a small town near my house deep in the Suffolk countryside there is a scarecrow display. Some are cute, some anything but. But then it’s Halloween and the cutest little trick or treater can turn into a right little monster with the excess of sugar that the day involves. I wonder what might turn these into monsters? Maybe the dark…. 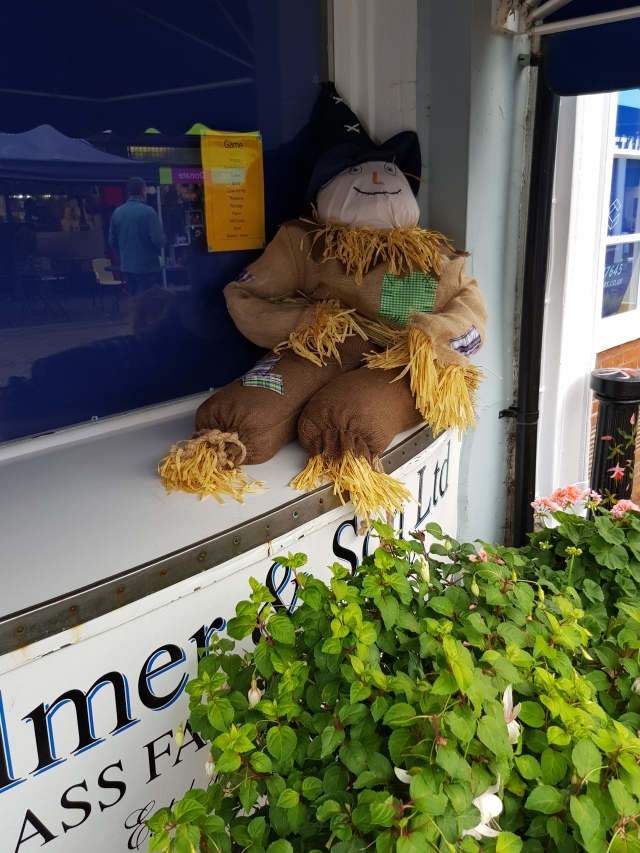 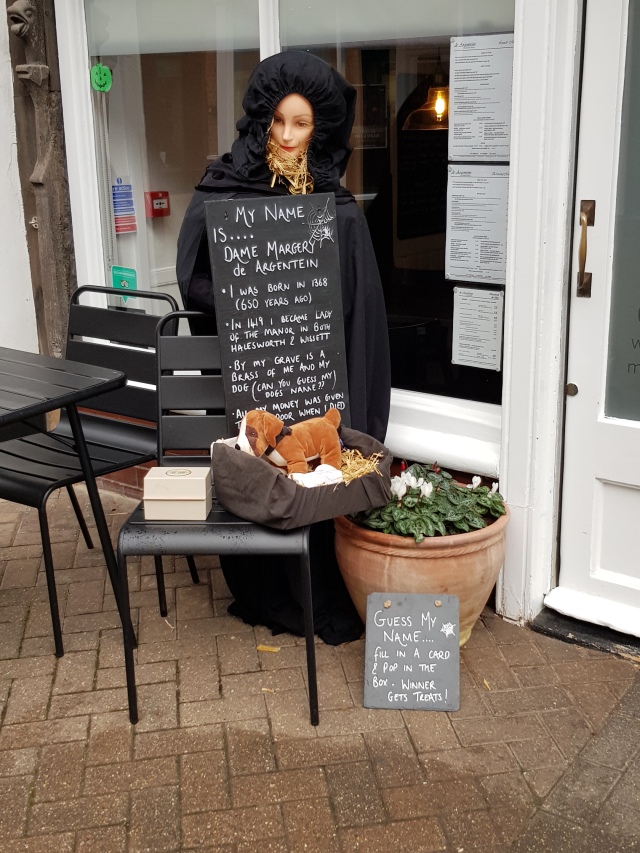 And in the spirit of Crows, here’s a little story of one that is in need of some help…

Something To Crow About

‘Right now “why” is more pressing.’

Jim Pale stood back. This was a joke. Some teen’s trick. Or one of those TV shows making a fool of him.

‘I’m neither a trick nor spoof TV.’ The crow sounded quite put out.

‘More your expression. It helps us survive to know what predators think.’

‘Not now you’ve got Lidl and a taste for cottage pie, but it’s not that long ago you ate my ancestors. A millennium is nothing in the life of a crow.’

‘You’re not one thousand years old.’

The crow grunted. ‘All I’m saying is I have to be desperate to speak to a human.’

Jim stepped back. ‘Why aren’t you flying?’

The crow sighed. ‘At bloody last. The “why” question.’

‘Look. If you want help, sarcasm is hardly going to encourage it.’

‘It’s in the name, moron. “Crow”. It’s what we do. We could have been called Sneers or Eye-rolls but we stuck with crow as the name. It’s suggestive of superiority.’

Jim began to turn away.

‘Oh all right.  I’m sorry. Ok? Does that make it better? You’re the dominant bloody species and I’m a sodding bird yet your skin is as thin as an anaemic slug.’

Jim coloured. ‘Sorry. How come you’re… Actually, what are you doing? Hovering? Floating?’

‘Does that happen often?’

‘Really? You need to ask that? Geez, are you really as stupid as you look?’

‘Why should I? You’re a foul-mouthed…’

‘It was a joke? Of course I don’t have a chicken’s mouth.’

Jim checked his watch. ‘I need to get on.’

‘All right.  Bloody hell. Look, one minute I’m swooping down for that burger crust there, the next I’m here, in mid-beat like one of those ridiculous porcelain ducks you love to stick above your fireplaces.’

‘No one has flying ducks anymore.’

‘You looked in number seventy-two recently? She even has antimacassars. Can we stop this redundant intimacy? You said you were busy. Just see what’s stopping me flying, will you?’

Jim stepped forward. He looked around the suspended crow. ‘It looks like you have two strings holding you in place.’

Jim peered hard. ‘Actually there are more than two.’

Jim reached up and tugged at one. The crow’s left wing beat slowly.

‘Oh that’s great. I’ve just undermined your whole belief system by talking and showing you I can mind-read…’

Jim nodded. ‘Yes. Fair point.’ He reached up and touched the nearest wing.

The crow jerked away. ‘That tickles. Be firm, will you?’

‘Do you really need an answer to that?’

‘No, I suppose not. Here,’ he unhooked a string. Then another. After less than a minute the crow stood by Jim’s feet. ‘Better?’

‘I just want to know who did this. Bloody nerve. Right. I’d better be off.’ The crow turned and stretched its wings.

Jim said, ‘Are you going to say thank you or anything? Show your appreciation?’

The crow twisted its head and held Jim’s gaze for a moment. Then he took to the air and flew in a wide arc. As his flight path crossed where Jim stood he emptied his bowels in a white stream of avian faeces that hit Jim slap on the forehead.

Jim staggered back, stunned. ‘What was that for?’

The crow curved away cackling. ‘I thought you lot considered that to be lucky? Well, be lucky, Jim Pale. I hope it’ll mean you’ll have something to crow about.’

Maybe what we all need, at times like this, is a little ray of sunshine. A rainbow needs sunshine, but it also needs its dark side too. Have you ever wondered why rainbows are inherently creepy? Maybe that’s the reason… After all, where so they really end? 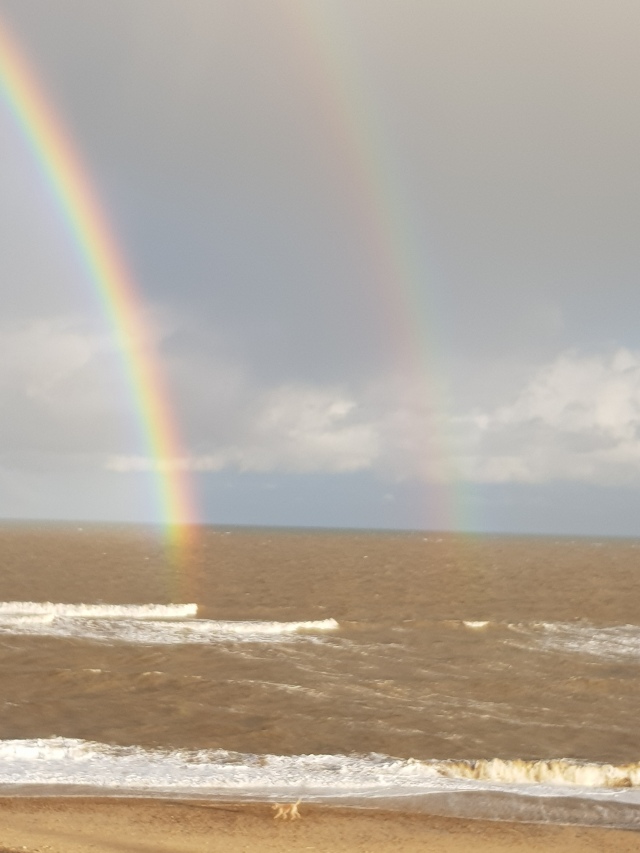 My name is Geoff Le Pard. Once I was a lawyer; now I am a writer. I've published several books: a four book series following Harry Spittle as he grows from hapless student to hapless partner in a London law firm; four others in different genres; a book of poetry; four anthologies of short fiction; and a memoir of my mother. I have several more in the pipeline. I have been blogging regularly since 2014, on topic as diverse as: poetry based on famous poems; memories from my life; my garden; my dog; a whole variety of short fiction; my attempts at baking and food; travel and the consequent disasters; theatre, film and book reviews; and the occasional thought piece. Mostly it is whatever takes my fancy. I avoid politics, mostly, and religion, always. I don't mean to upset anyone but if I do, well, sorry and I suggest you go elsewhere. These are my thoughts and no one else is to blame. If you want to nab anything I post, please acknowledge where it came from.
View all posts by TanGental →
This entry was posted in creative writing, humour, miscellany and tagged crows, Halesworth scarecrow festival, rainbows, thoughts. Bookmark the permalink.

14 Responses to Crowing About Everything #scarecrows #halloween #shortstory