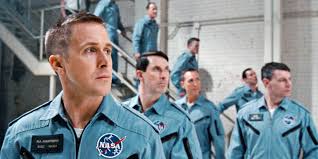 I had an English teacher who mastered the ability to terrify through passivity. He would stand at the front of the class and stare into space. Gradually he would turn and look at you, his face betraying no emotion, no sign he’d registered your presence. It was the sense that he might display some sort of reaction to whatever it was you had done or said that left you feeling discombobulated. A fear of what his reaction might be.

Ryan Gosling does that in First Man. A lot. Twice we see some tears. A few times his face scrunches up in concentration. And he does smile and laugh a little, but that might just be wind.

I think we are meant to believe there’s a lot going on beneath the surface. the loss of his character’s daughter – if you didn’t know, he plays Neil Armstrong, he of the first man on the moon, one small step etc… We see him with a child’s bracelet. We see him leave it on the moon. I didn’t really believe that, but it might have happened. We see him lose close friends and colleagues. We see him nearly die. He might just as well have been buying artichokes and wondering if the price was reasonable for the time of year.

Ok, his generation weren’t exactly big on displays of emotion. And staying cool was essential given the crazy schedule they had to work to.

But there’s cool, calm and collected and there’s dead. His characterisation hovered somewhere between these points on the spectrum and sometimes I think he slipped too far towards the inert rather than the suppressed.

Let’s be clear, though; this is a very watchable film, even if those bits just focused on Gosling’s face in a  space helmet are a bit like staring at the door of your washing machine and wondering if you’ll spot the black sock you meant to leave out of the all white wash.

It’s an extraordinary film in many ways, since we know how it all works out and yet the director and cast manage to convey the gnawing tension that achieving this impossible goal must have imposed on everyone at the time. Well, apart from Ryan’s jaw because if it clenched once I wasn’t paying attention.

Claire Foy as Mrs Armstrong, in contrast, is a bundle of life. She lets it out and holds it in in ways that are demonstrably human. Hers is a compelling performance. Oscar quality. Buzz Aldrin comes across as a bit of an arse and all the more human for that.

But all the ‘buzz’ – sorry, not sorry – is for Gosling and his portrayal of a true hero of our times. He’ll probably get the Oscar. Maybe he deserves it.

Maybe he’s too pretty, not craggy enough. He’s a little unblemished by life, unlike the real Armstrong.  I grew up on Clint Eastwood playing strong silent types, but you didn’t doubt the power, the anger, the driven nature of his characters. I just never got any of that with Gosling.

Now, I will repeat, in case you missed this; it’s a film worth going to see. There’s nothing wrong with it. Yet there could have been so much more that was right with it.

My name is Geoff Le Pard. Once I was a lawyer; now I am a writer. I've published several books: a four book series following Harry Spittle as he grows from hapless student to hapless partner in a London law firm; four others in different genres; a book of poetry; four anthologies of short fiction; and a memoir of my mother. I have several more in the pipeline. I have been blogging regularly since 2014, on topic as diverse as: poetry based on famous poems; memories from my life; my garden; my dog; a whole variety of short fiction; my attempts at baking and food; travel and the consequent disasters; theatre, film and book reviews; and the occasional thought piece. Mostly it is whatever takes my fancy. I avoid politics, mostly, and religion, always. I don't mean to upset anyone but if I do, well, sorry and I suggest you go elsewhere. These are my thoughts and no one else is to blame. If you want to nab anything I post, please acknowledge where it came from.
View all posts by TanGental →
This entry was posted in Film, miscellany, review and tagged claire foy, film, first man, review, ryan gosling. Bookmark the permalink.