The Wall And Other Weirdies: Part One #Iceland 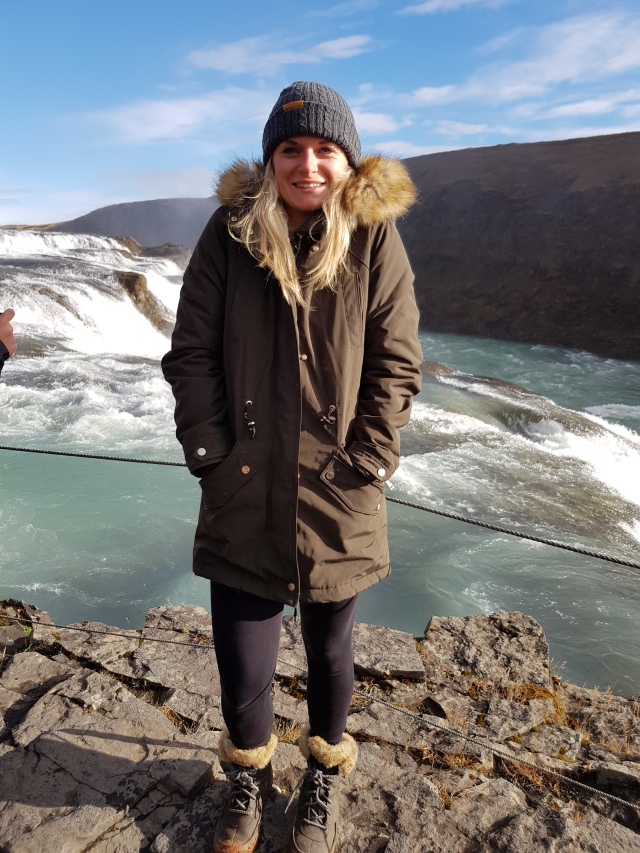 What did I know about Iceland? 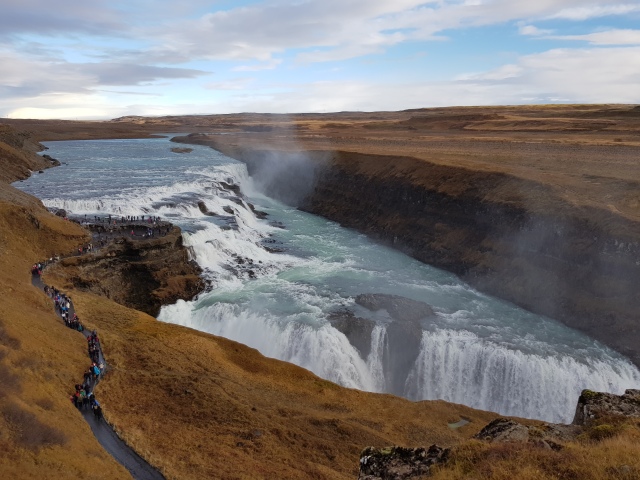 It is a geology lesson 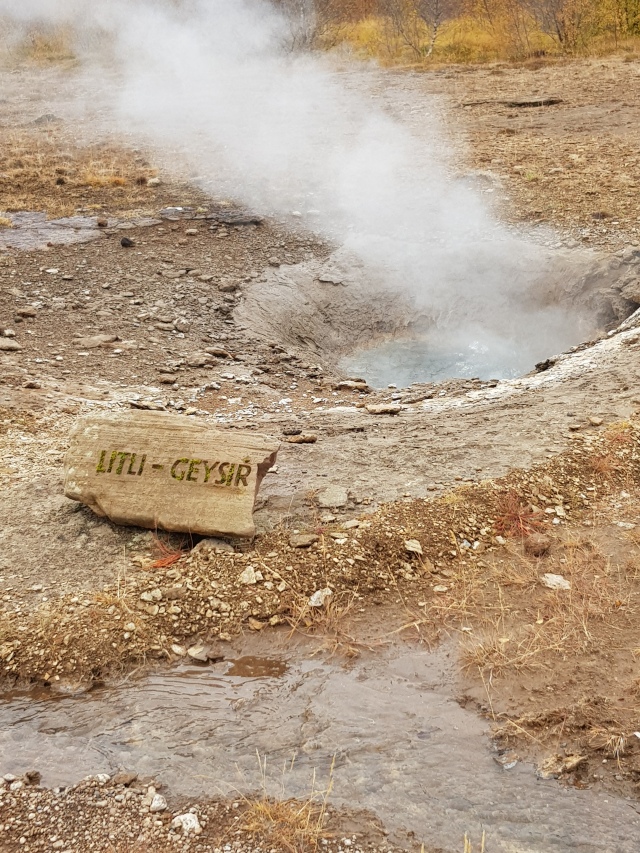 They beat us at footie 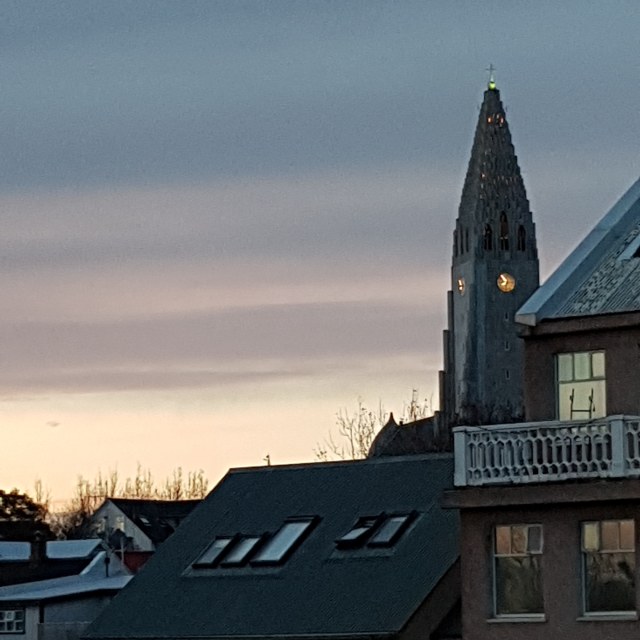 Everyone is known basically by a Christian name and another Christian name with -son or -dottir stuck on the end… Take one of their heroes: Leif Ericsson. He has a spiffing statue in the capital and a plaque and all, yet he’s known by a couple of Christian names. The chances of someone calling out his order in Starbucks and someone else taking it must be very high. 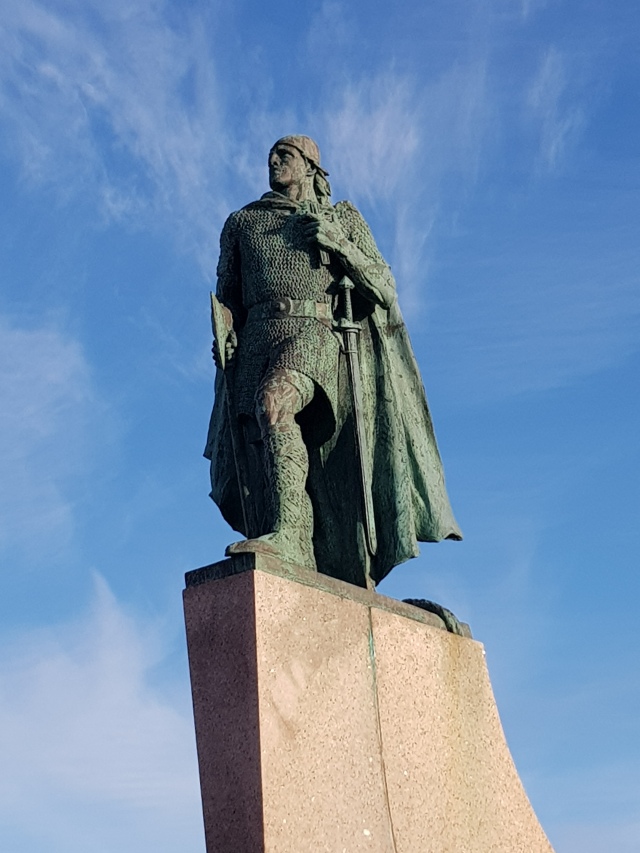 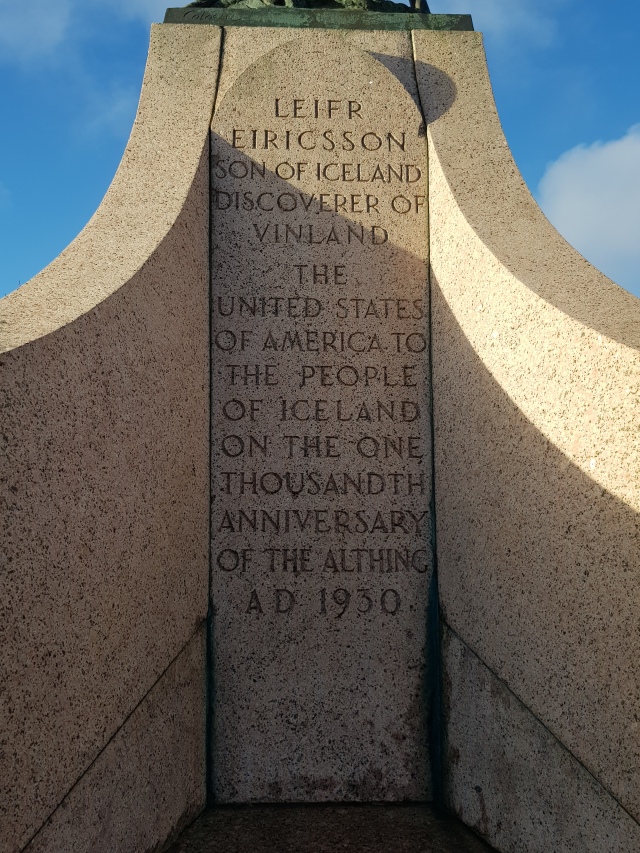 Fr’instance did you know the Icelandic telephone directory is listed by Christian names? Sounds like a recipe for making directory inquiries the most profitable business in Iceland until you realise the population is a smidge under 350,000. I mean everyone must use the same dentist and the chances of marrying a cousin has to be up there with death, taxes and the Germans winning on penalties as one of the Three Great Certainties.

So here I am in the Land of the Fermented Shark wondering if the hype is going to justify my buying thermal tights.

And you know what… 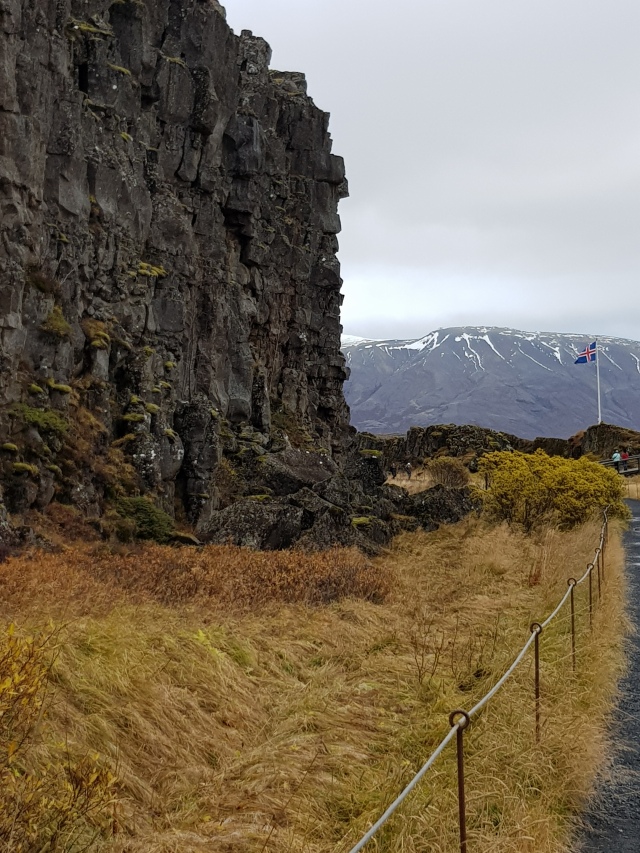 Lesson one: Iceland claims to have the longest continuous democratic system of government in the world. From 930 which is good but hardly in the early riser league. And like the oldest pub or largest tree or any of those unprovable bits of hyperbole, it’s  pretty full of holes. After all they only let women vote in 1915…

So let’s take some of their claims with a pinch of oofledust, shall we?

Lesson two: the Parliament was held on the bit of land that is gradually growing, in the shadow of the rock wall that denotes the edge of the North American tectonic plate. Who knew that Mother Nature And Donald Trump we’re so closely related, both seeking to build a bloody great wall on their boundaries? 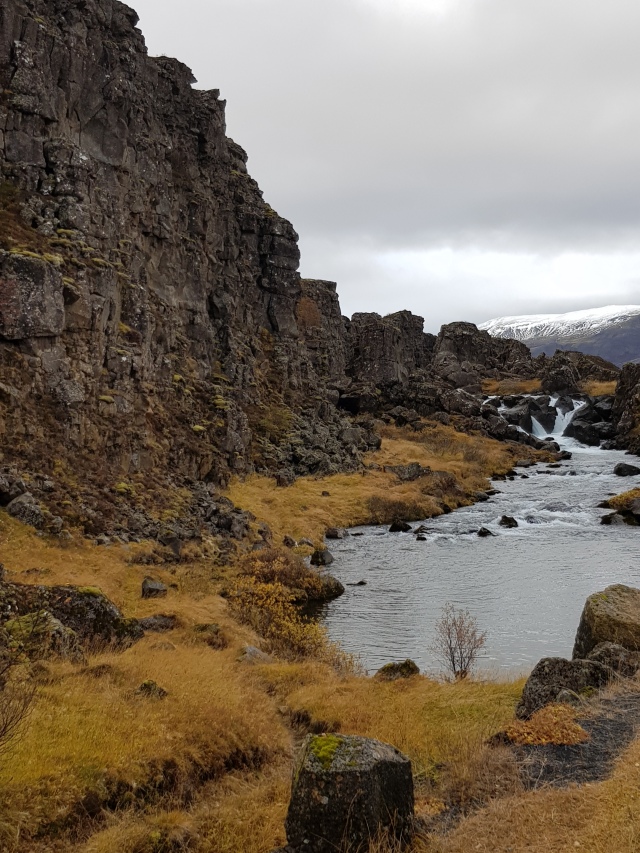 The Icelandic don’t have a standing army – no surprise when you think everyone would have to be a general after leaving school – so let’s hope The Donald doesn’t get to hear about all this new land that’s coming into being right by the American Wall. The chances of an invasion must be right up there…

Lesson three: the northern lights are about as predictable a Brexit negotiation. The sky was clear, the guide on the bus on the way to the view point kept saying ‘Look – left,’ then ‘Now right’ as we credulous numpties peered out of the coach windows and saw… ourselves peering back, and inevitably the sneaky little buggers had retired to the pub to watch a rerun of Oldest Democracies on the zither by the time we climbed out into the bum-numbing cold. This is my attempt at a long exposure piccy of what turned out to be sky. 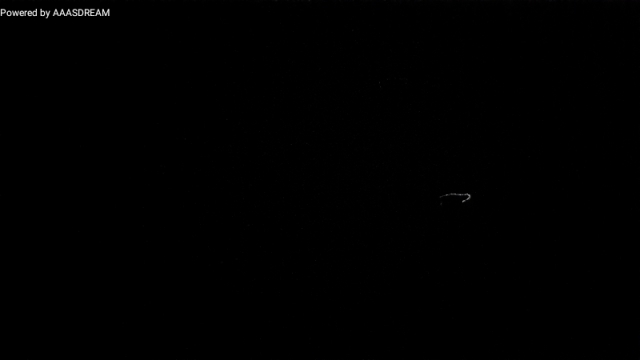 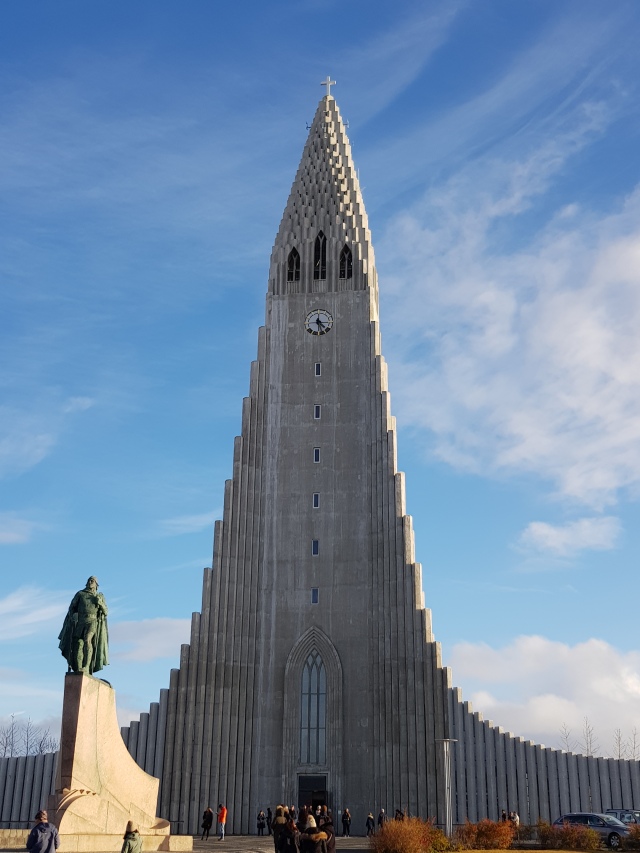 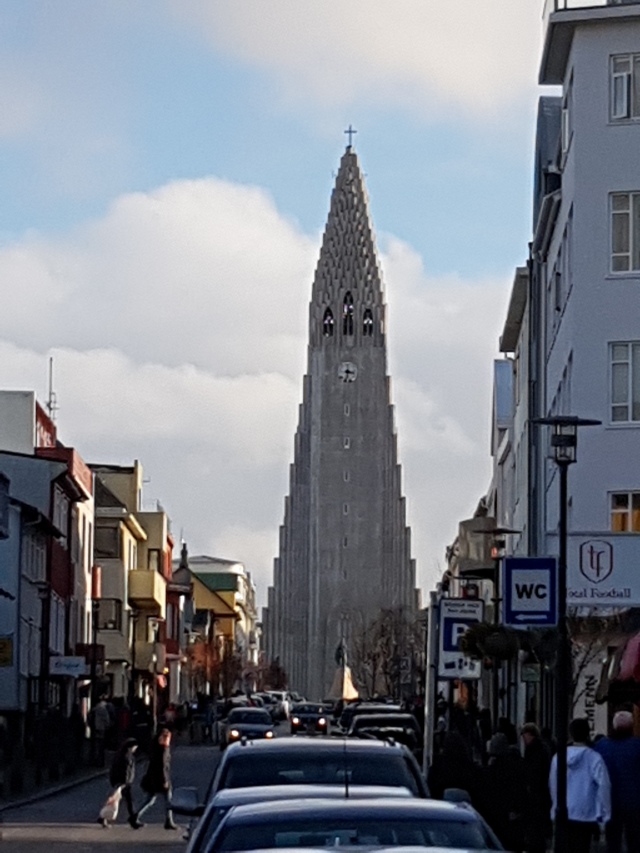 Oh and an exhibition dedicated to celebrating all things punk housed in a redundant public toilet that is transitioning into a museum. 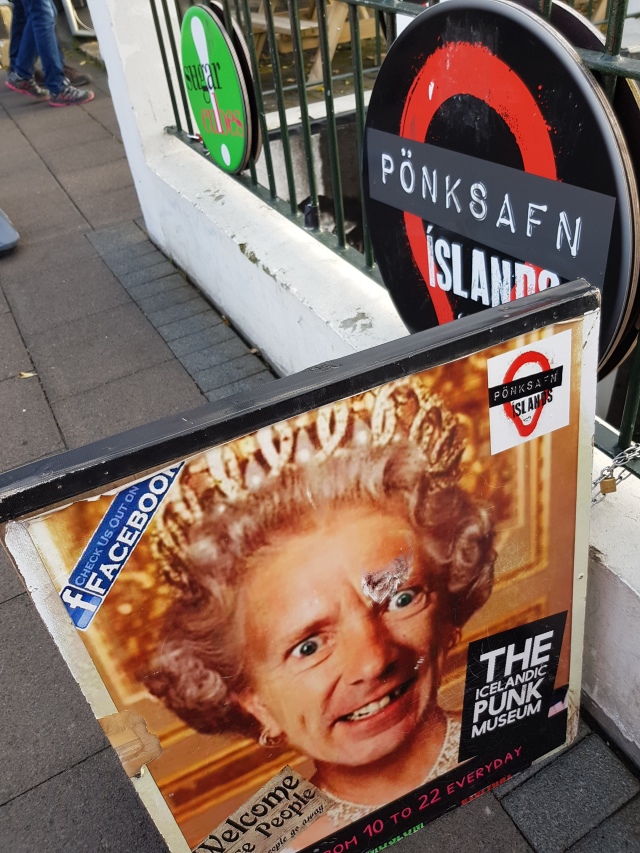 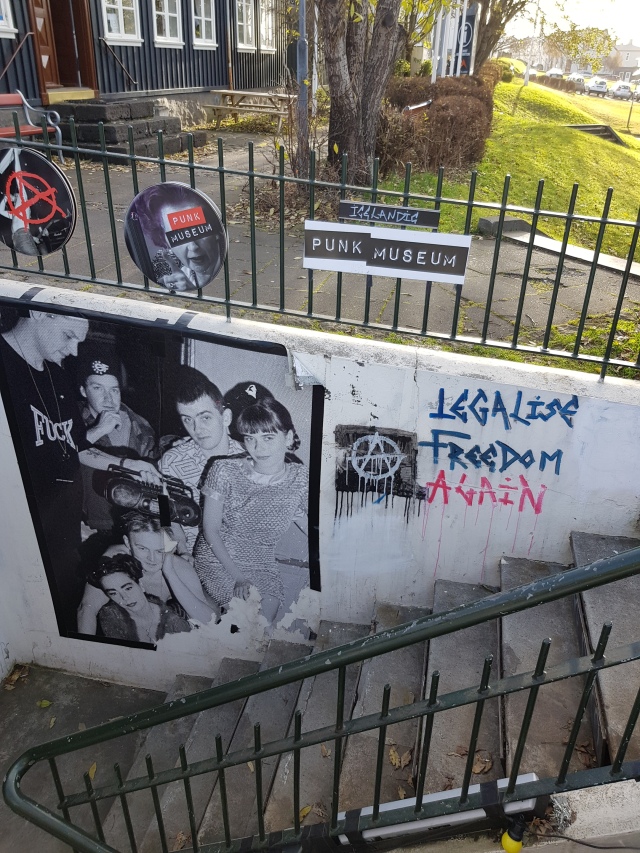 And don’t miss the Museum of The Phallus. Nope you couldn’t make it up… I mean leaving aside the shape of said church, we saw this… 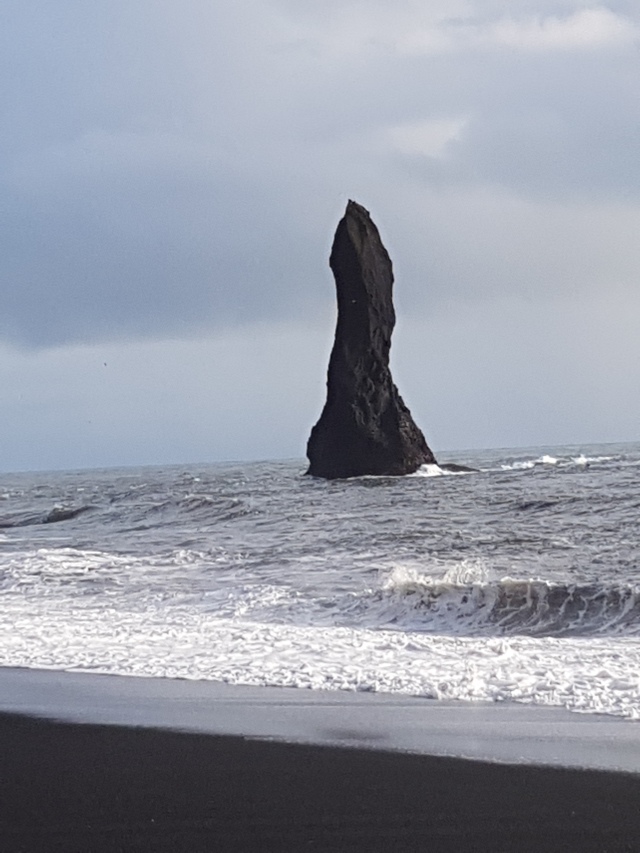 And even the geyser gave good steam… 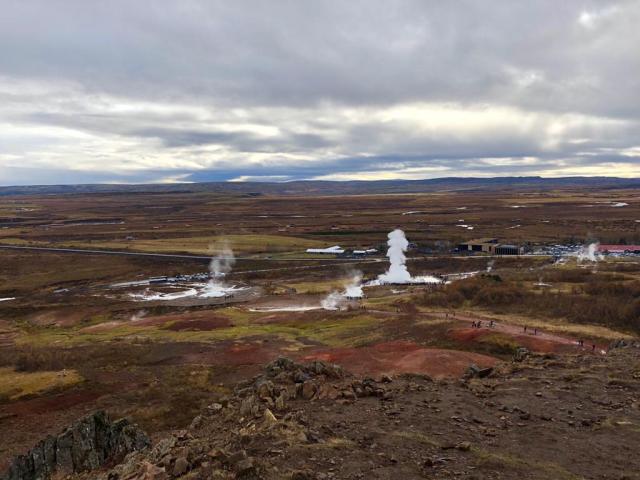 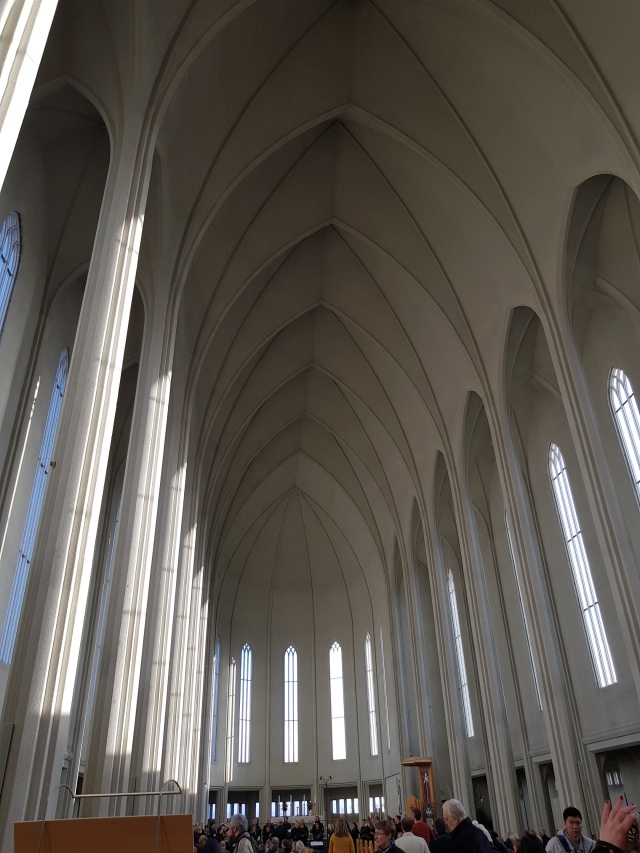 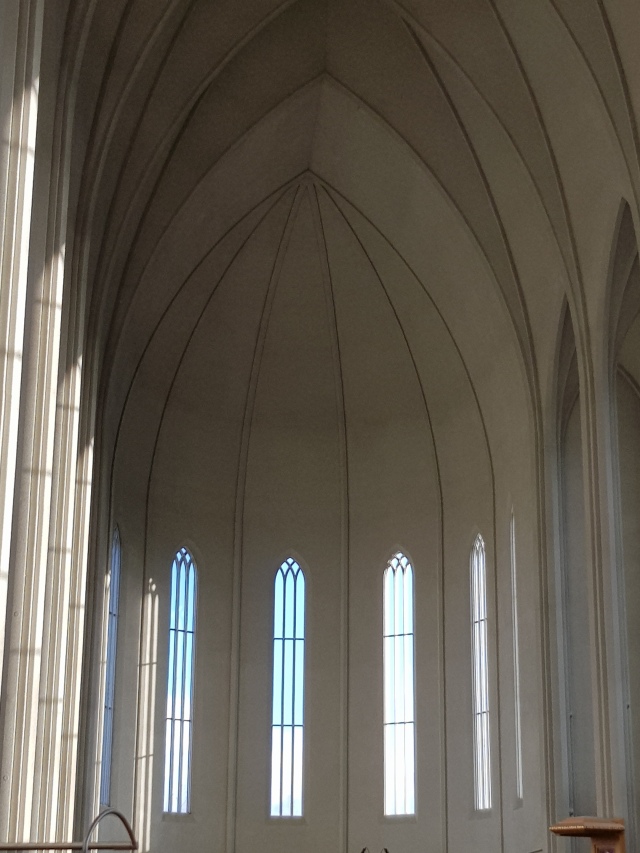 Still, back to the church. You know, Iceland has taught me one thing, about listening. We visited the amazing church, above. It is simply stunning. The simple structure and lack of adornment are dazzling. You cannot but have your breath taken away. As we entered, we found we had stumbled on a free concert of classical Icelandic music and songs. So we settled down to listen. The choir, about 30 members, unaccompanied sang about 10 songs and until the penultimate number I understood not a word. Then, suddenly, in that last but one piece, ‘hallelujah’ appeared maybe a dozen times. And I realised I was listening differently, listening for the familiarity of the words, letting the music sit behind the words, giving it a secondary role. Whereas up to that point the words were the music, as potent and as meaningless as a hum, and in truth all the better for that. Maybe that’s why some pop songs stay as music due the inarticulacy of the singers rendering the words meaningless. Or maybe I’m just very simple….

Lesson five: we have to come back to geology. This place is Weirdy Beardy’s delight. Sure the thermally heated Blue Lagoon lacks a bit of rustic charm but bathing in a massive outdoor pool that is set at a pretty constant 38 degrees and refreshed by gallons of new water every hour makes up for the state of the art changing rooms and wade-up smoothie bar. 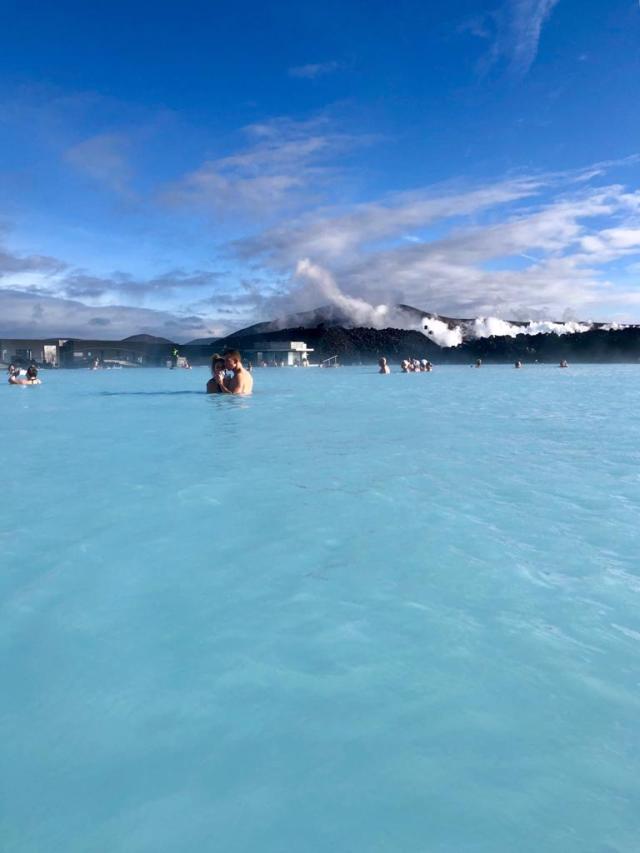 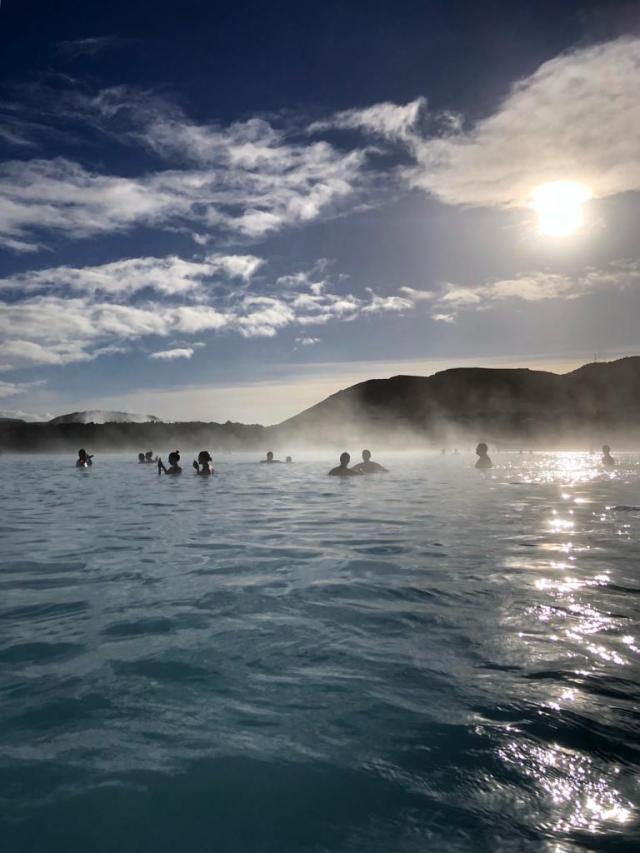 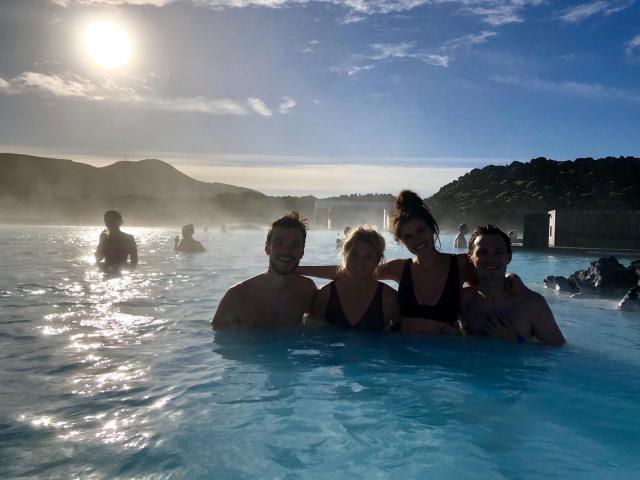 Actually both of those were great too. It’s hard to fault such an experience. 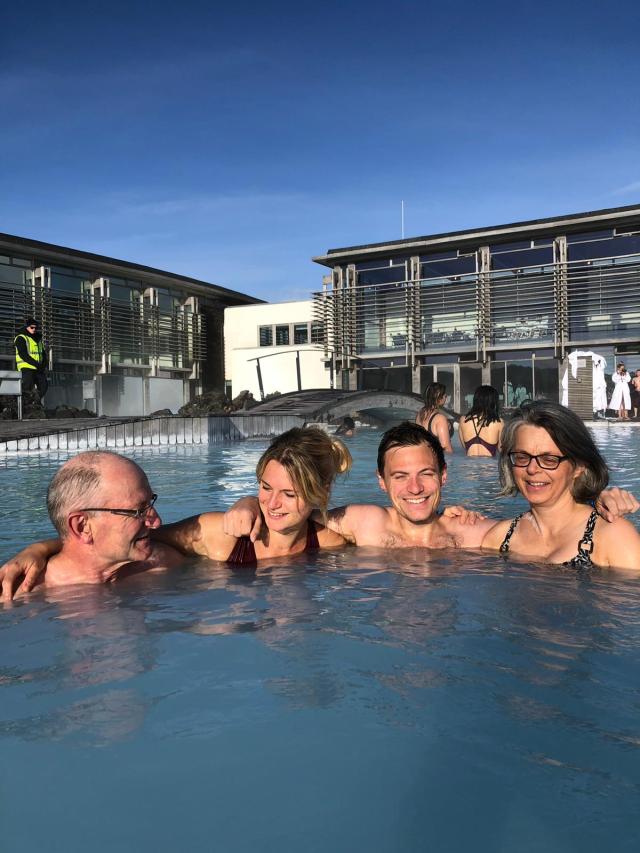 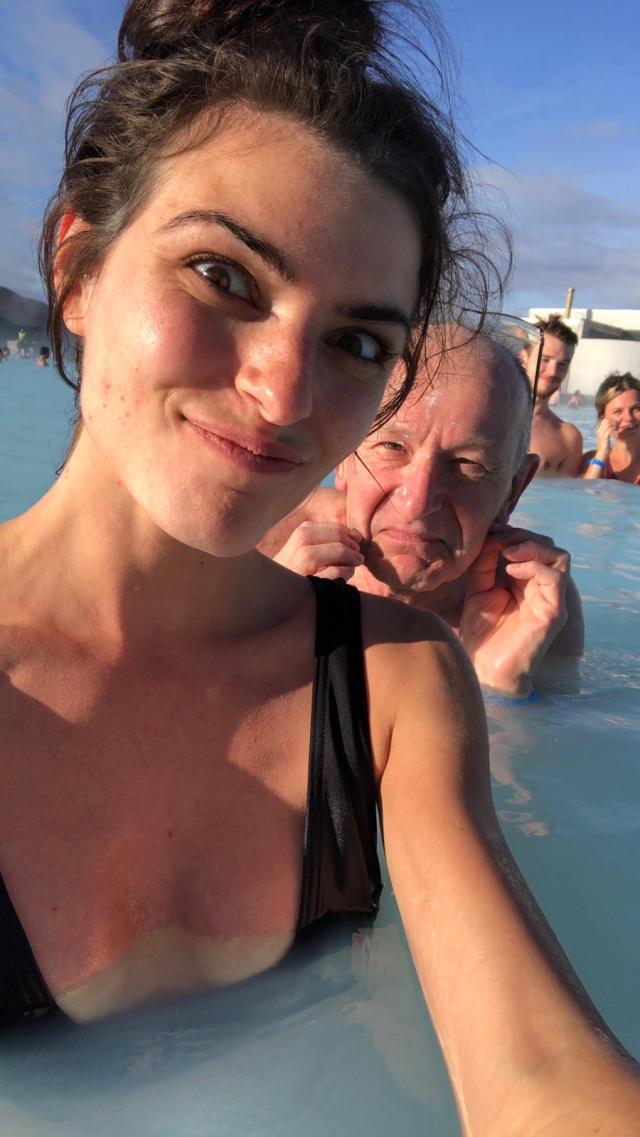 Even if I look like a toothless old letch in most of the family photos.

My name is Geoff Le Pard. Once I was a lawyer; now I am a writer. I've published several books: a four book series following Harry Spittle as he grows from hapless student to hapless partner in a London law firm; four others in different genres; a book of poetry; four anthologies of short fiction; and a memoir of my mother. I have several more in the pipeline. I have been blogging regularly since 2014, on topic as diverse as: poetry based on famous poems; memories from my life; my garden; my dog; a whole variety of short fiction; my attempts at baking and food; travel and the consequent disasters; theatre, film and book reviews; and the occasional thought piece. Mostly it is whatever takes my fancy. I avoid politics, mostly, and religion, always. I don't mean to upset anyone but if I do, well, sorry and I suggest you go elsewhere. These are my thoughts and no one else is to blame. If you want to nab anything I post, please acknowledge where it came from.
View all posts by TanGental →
This entry was posted in holidays, humour, Iceland, miscellany, thought and tagged blue lagoon, church, Iceland, museums, Reykjavík, tectonic plates. Bookmark the permalink.

52 Responses to The Wall And Other Weirdies: Part One #Iceland