I blog about all sorts and usually aim to avoid controversy. Occasionally my mask slips and you’ll discern what I think about certain politicians, or cultural memes, or incidents of societal neglect.

Today, however, I know I will get into trouble and I really don’t care. I welcome it. Bring it on, I say.

See, I’m a very lucky guy, a happy-chappy with ever reason to be and the biggest of the many reasons to be thus is not Dog, though he is an essential element in the story. 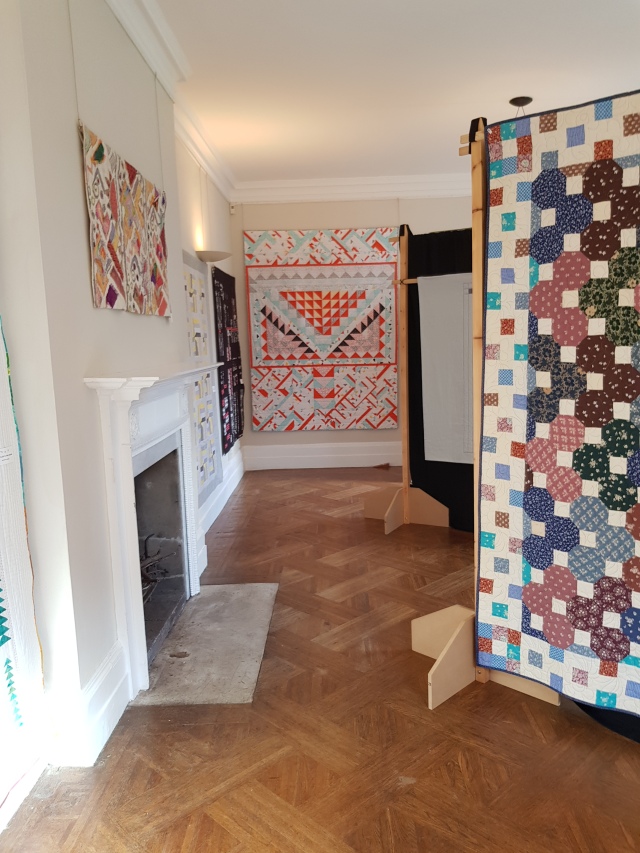 And it’s not like this is, for anyone else, an issue that could cause any sort of controversy.

But bugger it, I just don’t care.

I’ll just spit it out. 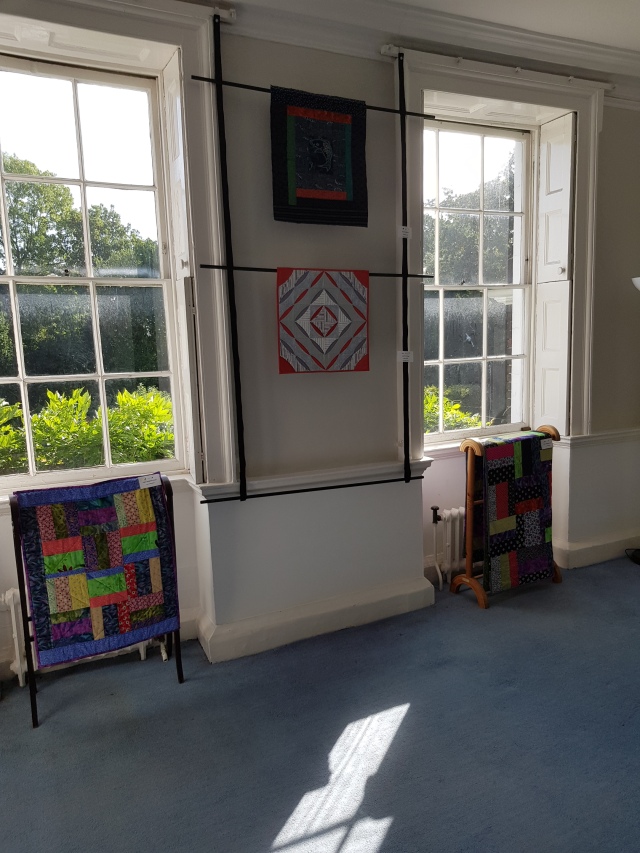 And she will genuinely be pissed off that I’ve gone and said that in a public forum. She treasures her privacy and I respect that. I try hard to hide her personal details and especially her image – not that I try that hard, but still I keep them on the lower end of the deniability spectrum.

However, this demands a bit of gratuitous flaunting.  She belongs to a local quilt group as one of her many creative outlets and for a number of years, she has been involved in helping put on their bi-annual display of quilts and other creative pieces in textiles. Anything that involves stitching really.

Each time the show rolls round, the Old Library at Dulwich College is hired  and filled with quilts. It’s a large room and with the stands can house a significant number. There’s a skill in placing the right quilt in the best place, I know. And she’s worked at that. So have a lot of people. 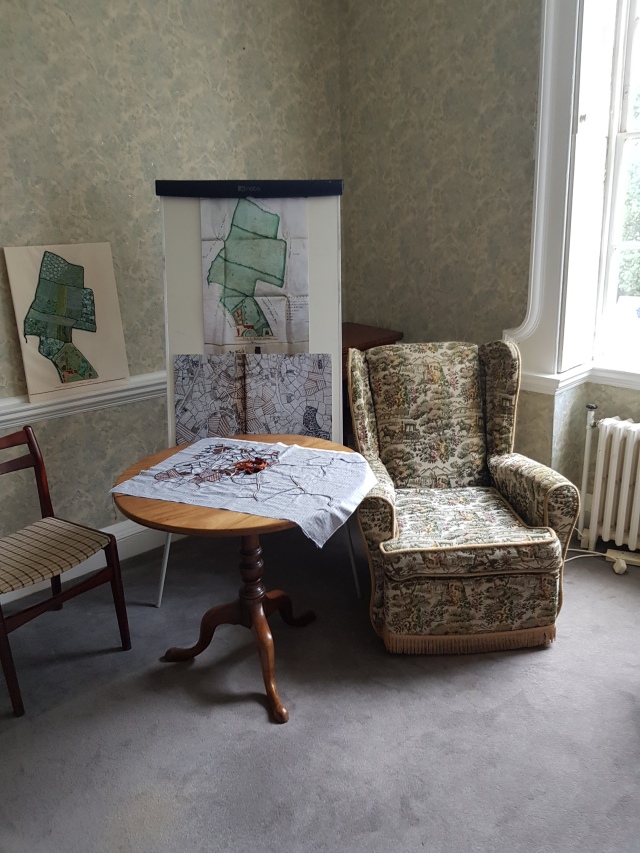 But all changed this year. The prices became ludicrous – so another venue was needed. It happened that a large eighteenth century house in the centre of Dulwich changed hands and is now developing into a mixed use teaching centre. The new owners were really very keen to host the show, as a local group that does significant work for charities. (This year for instance the group made a quilt as the leading prize in a raffle for Alzheimer’s research – guess who masterminded that piece, below?) 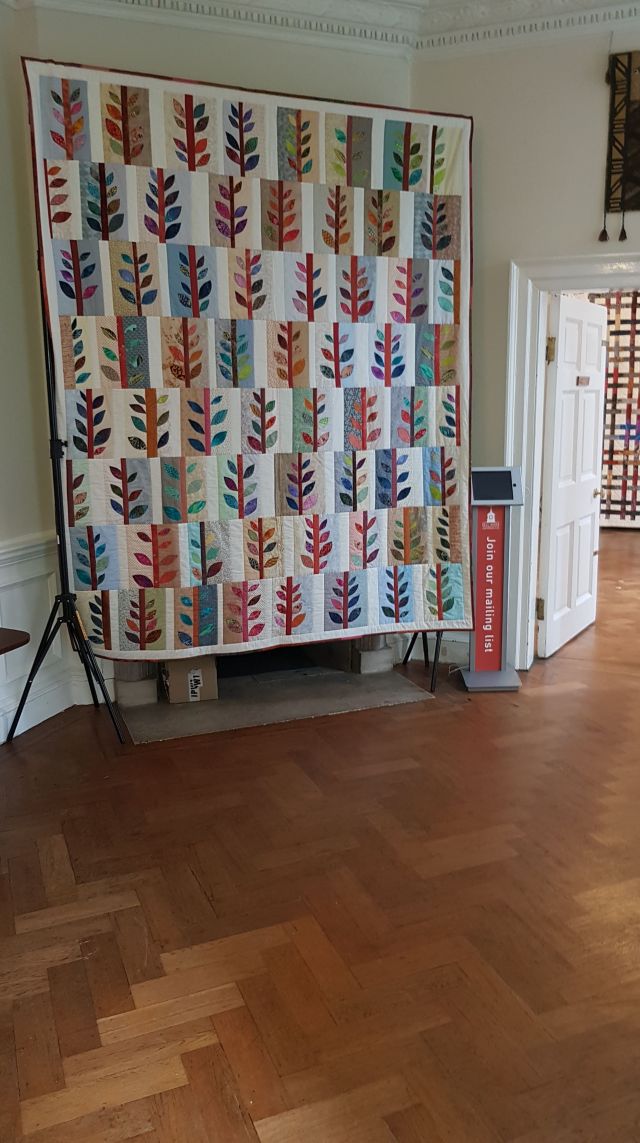 Bell House is a beautiful old building that has been neglected for a long time. It seemed to certain people like a marriage made – well somewhere good. Symbiotic. If you want to know more about the venue, click here. 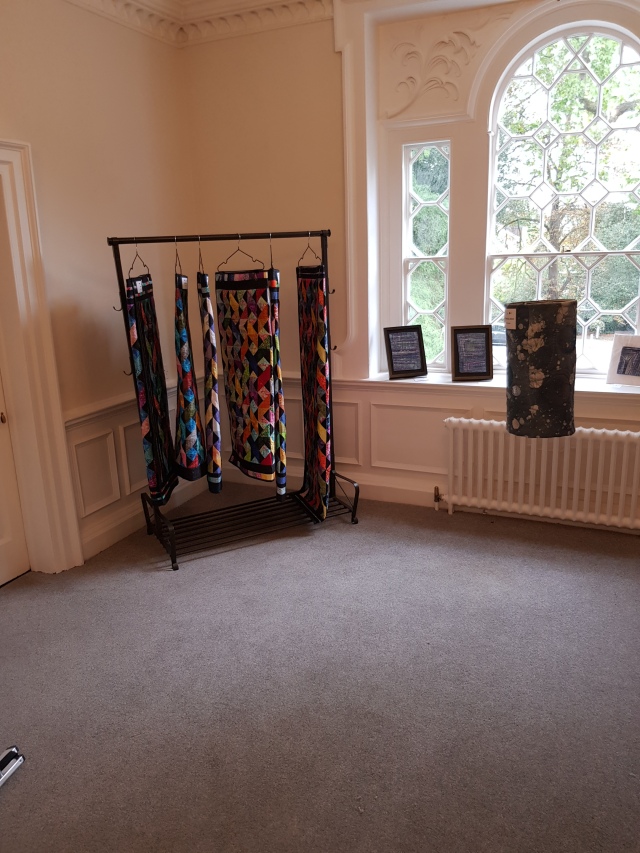 Only no one considered how the quilts might best be displayed, how they might be hung, where the shop selling quilting products might go, what about the tea rooms and the cakes that are a feature of the show? The thing needed someone to curate it. Professionally.

Oh dear. When I heard that… It was inevitable. She’s curated shows at Uni for her degree in textiles. She was a leading player in creating the prison quilt for the V&A’s quilt exhibition a few years ago. It’s a mountainous, pretty thankless task but unless it’s done by someone with the patience of Job, the eye for colour of Michelangelo and the tact of Nelson Mandela it will all end in tears – come unstitched, if you like.

For months, she’s been measuring and planning and cajoling and pacifying and never losing her temper. For instance when the venue announced that, notwithstanding having agreed to allow the quilts to be hung through Friday for an opening on Saturday, it had let out the main room for a Harpsichord recital on the Friday night. Which meant all the stands had to be moved out of the way and the room given over to harpsichord practice midway through Friday and the room closed off from mid afternoon. She let me have a rant of her behalf. Quietly. She laughed. It’s her default setting.

She utilised the venue to stunning effect. The long rear corridor with a row of coat hooks was turned into a vibrant display of Linus Quilts that the group makes for the premature babies unit at Kings College Hospital. Linus Quilts? Here’s the link.

It’s that calmness under pressure that defines her. She exudes resilience. She doesn’t get angry; she doesn’t get even. She considers the problem and determines the best course of action. She never shies away from tough decisions, but she never rushes into making them.

And there she is, praying for guidance maybe…

Obviously I love her to bits. Durrh. But I also respect her in ways I can’t really explain. I want to be more like her, less inclined to fizz like a firework that is past its sell-by date when things happen that irritate me. I never will be and that’s probably just as well really. Because if we were both like that then we’d both be perfect and everyone would hate us.

Sometimes she reads my blog posts. I could start this with some silly bit of flash and she’d probably not bother to read this. But hell, let’s see what happens. If you find I’ve gone on a blogging break, you’ll know I’ve utterly misjudged her capacity for gratuitous retribution. 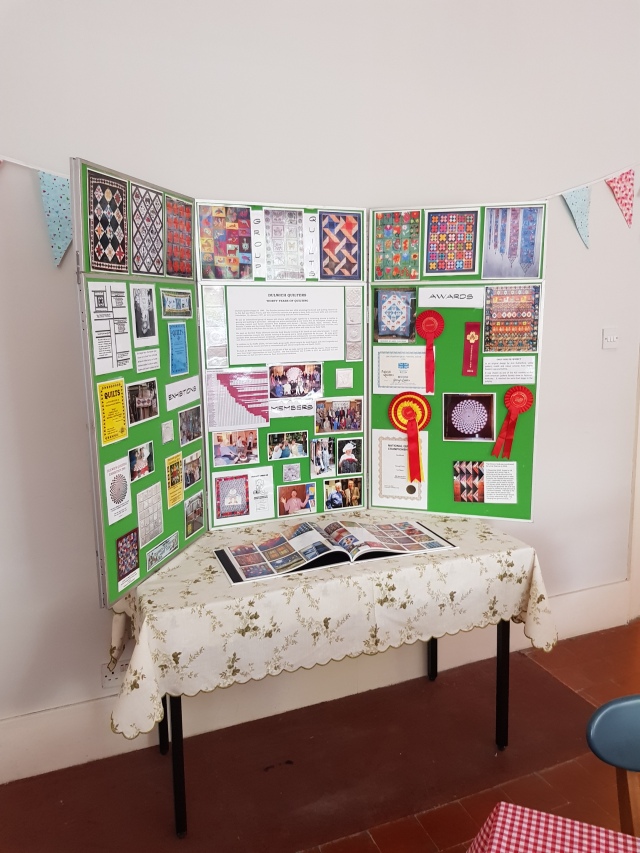 Meantime, let’s give her a bit of well-earned applause.

My name is Geoff Le Pard. Once I was a lawyer; now I am a writer. I've published several books: a four book series following Harry Spittle as he grows from hapless student to hapless partner in a London law firm; four others in different genres; a book of poetry; four anthologies of short fiction; and a memoir of my mother. I have several more in the pipeline. I have been blogging regularly since 2014, on topic as diverse as: poetry based on famous poems; memories from my life; my garden; my dog; a whole variety of short fiction; my attempts at baking and food; travel and the consequent disasters; theatre, film and book reviews; and the occasional thought piece. Mostly it is whatever takes my fancy. I avoid politics, mostly, and religion, always. I don't mean to upset anyone but if I do, well, sorry and I suggest you go elsewhere. These are my thoughts and no one else is to blame. If you want to nab anything I post, please acknowledge where it came from.
View all posts by TanGental →
This entry was posted in miscellany and tagged bell house, curating, Dulwich, family, quilts. Bookmark the permalink.

73 Responses to I Really Shouldn’t…