The Bird Is On The Wing

There was a surprise the other day. A lavender bush with a lot of flowers on it waiting to be picked and dried appeared to have suffered from a dose of voracious moths. But no sign of caterpillars and when do caterpillars eat lavender flowers?

That was before we caught the culprits.

The grass is riz

Goldfinches, I believe. Not seen these beauties in ages. Watching them do their avian-as-locust impersonation took me back to boyhood and trailing after Dad as we went birds’ nesting.

Back then it wasn’t illegal to collect a bird’s eggs though it was becoming rather passé. Rather we’d hunt for the nests, identify the birds either from the actual birds flying in and out or, better still from my perspective because it seemed like we were detectives from the eggs themselves.

I wonder where the burdies is.

Dad was exceptional at finding nests. Benefit of the classic misspent youth, I guess. And he had a compendious knowledge of the birds themselves. We’d be out on a walk and while most would look at the view or talk in awed terms about the trees or the flowers, Dad would be peering into the nearest hedge.

While the rest of us would see twigs and leaves Dad could make out the shape of a nest. Once, he saw a yellowhammer flit into a hedge some fifty yards ahead. Dad’s excitement was palpable as he increased his pace and headed for where that little bird had disappeared.

The yellow hammer is interesting enough

but what I really remember where its eggs 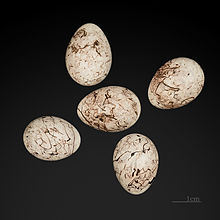 because, as a result of these patterned beauties it was also called the Arabic-writing bird for a reason.

The burd is on the wing

Being shown that nest, tucked into the hawthorn of a straggly unprepossessing hedge alongside a nondescript rural road in deepest darkest Kent will stay with me for a long time yet.

Not that long ago I did a post on a walk I’d done from Margate to Broadstairs. At one point that day I spotted a skylark. People talk about the skylark for its exceptional song. But the thing I like about it – as shown to me by Dad – was how it would try and deceive you as to where it had made its nest.

The cunning little minx would hover and then drop to the cliff top ground cover making you think ‘ah ha’ nest. But in fact I’m landed yards away and, on landing scurried off to its nest through the undergrowth.

And then there was the red back shrike.

A shrike is one of the most blood thirsty of nature’s beasts impaling its prey on spikes. As a small, naturally bloodthirsty lad this was brilliant.

Birds. Ah the fun. Clever, beautiful and dangerous to know. You might say the same about … no, of course I couldn’t. After all I don’t know anyone who eats lavender.

The wing is on the burd

My name is Geoff Le Pard. Once I was a lawyer; now I am a writer. I've published several books: a four book series following Harry Spittle as he grows from hapless student to hapless partner in a London law firm; four others in different genres; a book of poetry; four anthologies of short fiction; and a memoir of my mother. I have several more in the pipeline. I have been blogging regularly since 2014, on topic as diverse as: poetry based on famous poems; memories from my life; my garden; my dog; a whole variety of short fiction; my attempts at baking and food; travel and the consequent disasters; theatre, film and book reviews; and the occasional thought piece. Mostly it is whatever takes my fancy. I avoid politics, mostly, and religion, always. I don't mean to upset anyone but if I do, well, sorry and I suggest you go elsewhere. These are my thoughts and no one else is to blame. If you want to nab anything I post, please acknowledge where it came from.
View all posts by TanGental →
This entry was posted in miscellany and tagged birds, memories. Bookmark the permalink.

46 Responses to The Bird Is On The Wing