Thanet, A Walk On The Not So Wild Side #walking #kent

The images in this post come from our walk between Margate and Broadstairs. If the weather provides a calm backdrop it’s worth the effort.

I spent a lot of my summers in North Kent, at my maternal grandma’s. My memories revolve around pebbly beaches, whippy ice cream, crabbing off the pier and long long walks. 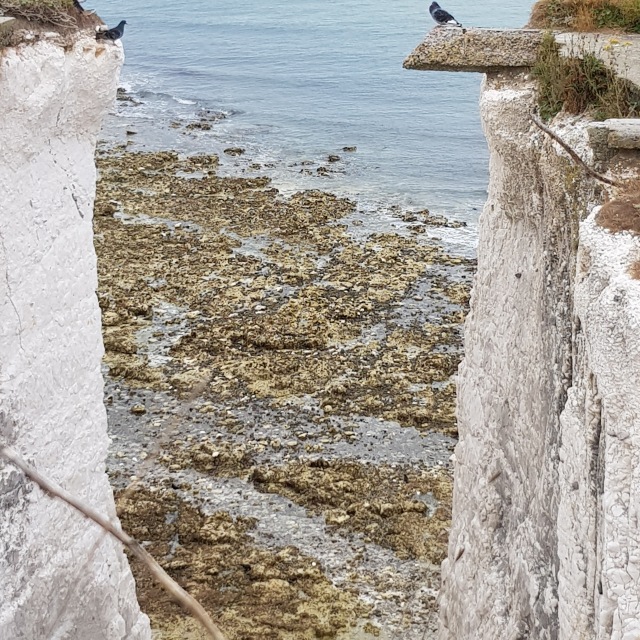 Oh and Canterbury Cathedral. But that’s another story, another psychological trauma. 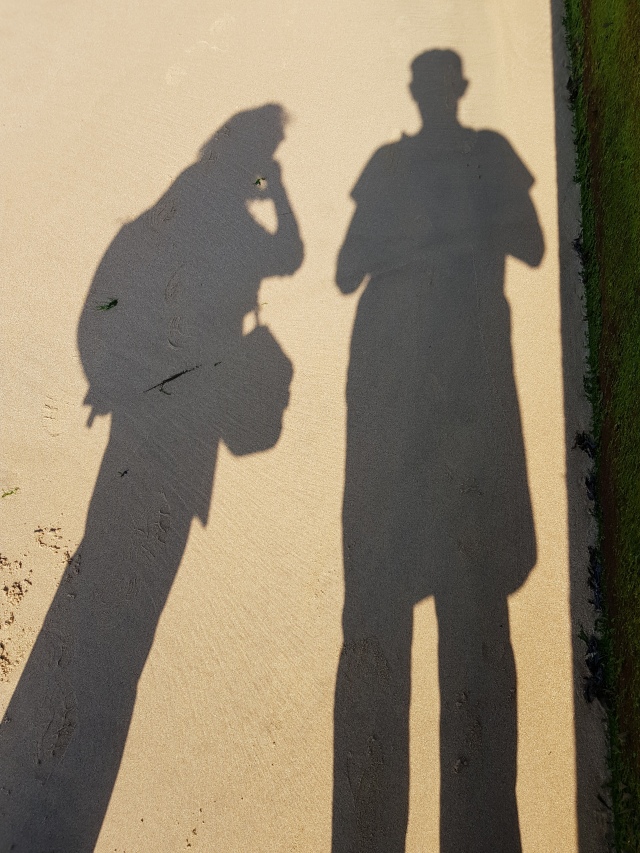 What I don’t recall is any feeling of the relative affluence of the place compared to say where we lived in North Surrey, or Croydon where we shopped or pretty much anywhere. Each place felt much the same as any other.

The shops were local, and open. The pubs were pubs. Ditto the churches. Houses were generally rather tired and black from soot. Gardens were mostly tended. 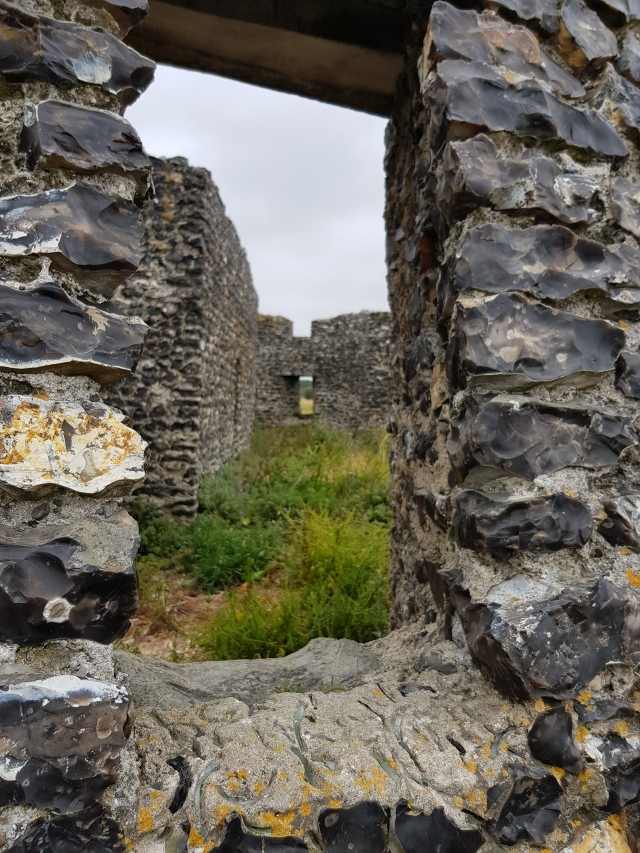 Margate is a holiday resort, precariously perched on the eastern end of Kent and therefore England. It had an enduring popularity when I was a kid even if its developed existence owed much to the railway and the Victorians’ belief in the health giving properties of sea water and sea air. Its buildings had a certain grandeur and a vicarious glamour arising from its association with JWM Turner who painted many works hereabouts. Its sandy beaches and Dreamland fantasy brought in visitors during the 60s and 70s.

But then like so many places it faded. The gravitational pull of London took away business, cheap air fares did the same for holidaymakers. Being at the end of the line, Margate lost a bit of hope. It also attracted a fairly large itinerant population who worked in agriculture but lived in the cheap bedsits and multi occupations that previously housed the bucket and spade set.

The Vet works for a pet charity, the PDSA – the People’s Dispensary For Sick Animals – who provide vet services to those on benefits. They have a branch operation in Margate where she works twice a month. 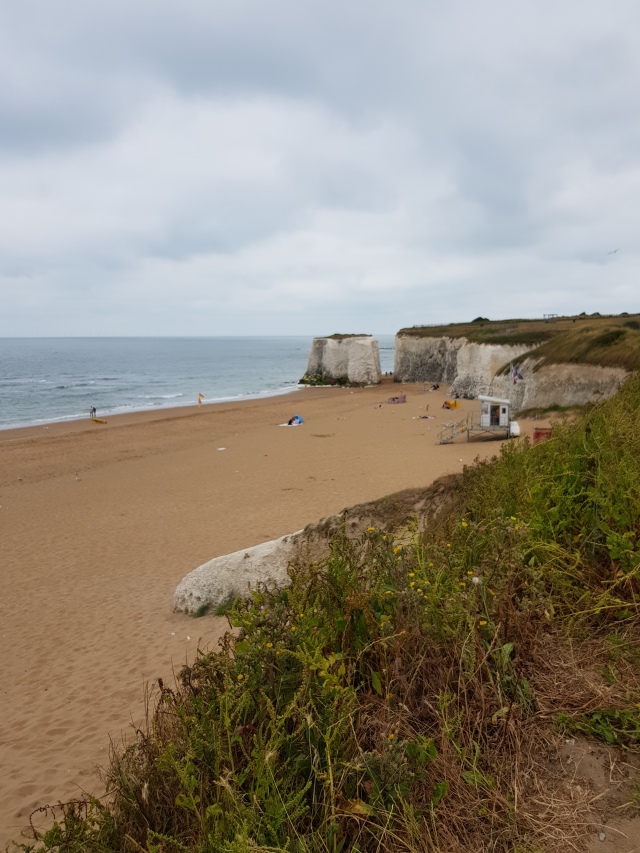 The weather has been balmy, Dog likes a good walk so we, Dog, the Textiliste and I decided we’d take a day out of our busy schedules (yeah, right), visit the Vet for lunch, go for a long walk, have dinner and home. 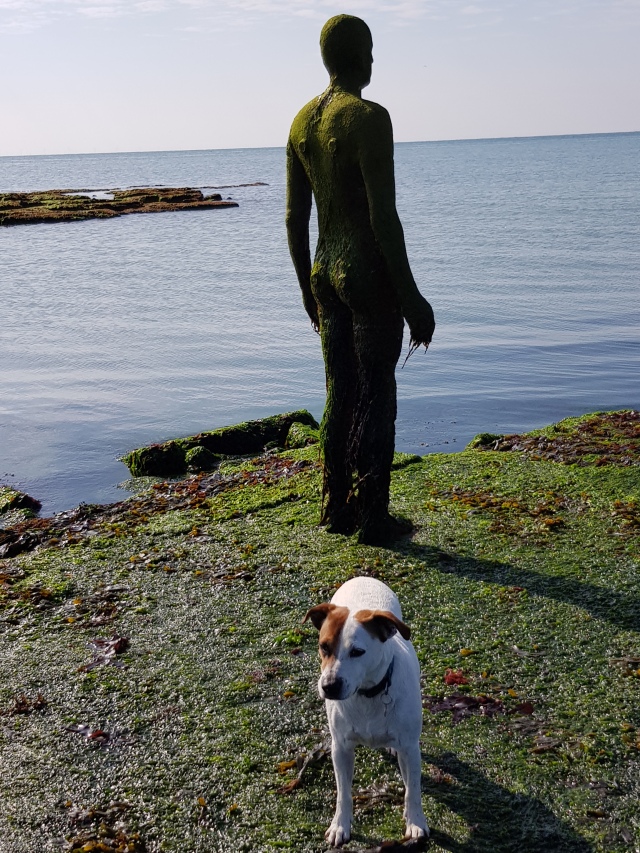 The start of the Viking Way is the Turner Gallery, a small optimistic operation housing some of the great man’s works and a roving selection of exhibits. Outside, if the tide is right you can see an Anthony Gormley statue, similar to those near Liverpool.

From there the walk curves around the coast to Broadstairs six miles away. The beaches are sandy, the many bays private and, on sunny days, they are good places to sit and while away a few hours.

Often the east wind will bite making the idea of sitting still an exercise in static hypothermia, but not today.

The coast itself is a strangely uniform chalk cliff, thirty foot high, carved flat as part of the sea defences that protect the properties that perch above, sitting amongst a goodly selection of wild flowers.

And there lies one of the conundrums, the surprise of this place. The affluence. The restored splendour, the modernistic glory, almost oligarchical in its extravagance. People are putting money in to some parts of this area. An example: in Broadstairs, linked to Dickens and Richard Hanney, he of the 39 steps, there is a bespoke fireplace shop. As well as three dodgy looking bookies and a Latvian supermarket.

It’s the train you see. To make the London Olympics work they invested in ‘javelin’ trains, using the same tracks as the fast link that had been built to service the channel tunnel. After the Games ended the self same trains provided a new fast service to these remote and forgotten parts of Kent. You can now travel from Margate to Kings Cross quicker than you can from Richmond. And for that you can get a sea view and property a quarter of the price.

Affluence. It follows the money, you know. 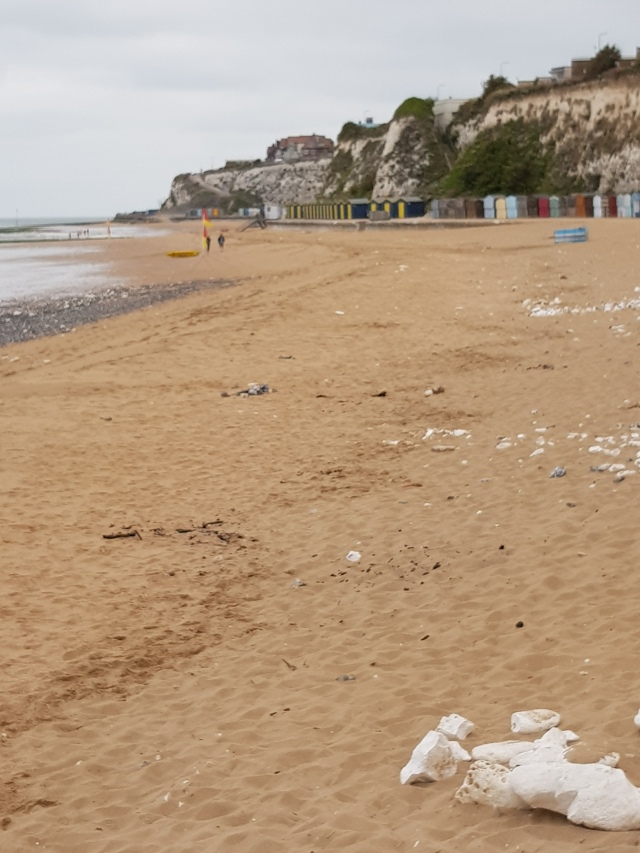 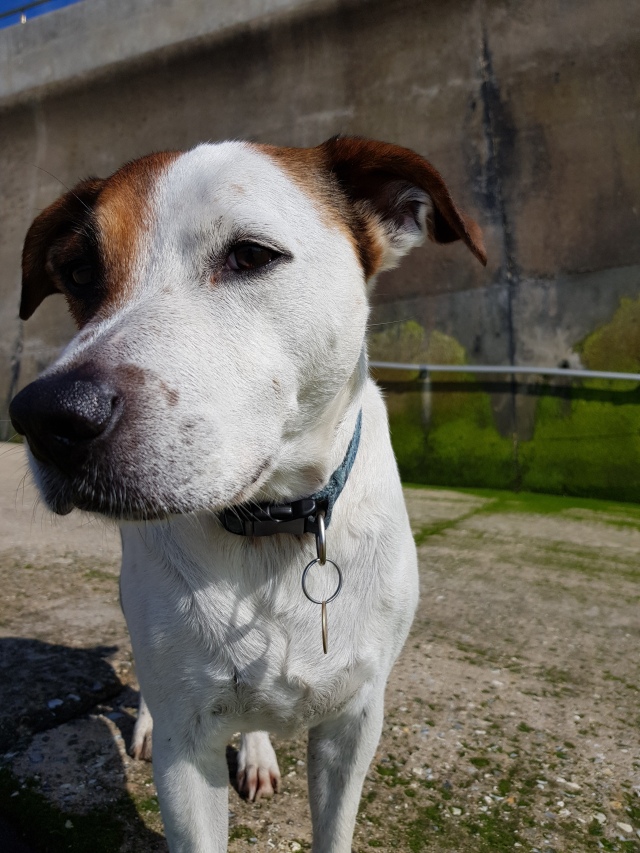 My name is Geoff Le Pard. Once I was a lawyer; now I am a writer. I've published four books - Dead Flies and Sherry Trifle, My Father and Other Liars, Salisbury Square and Buster & Moo. In addition I have published three anthologies of short stories and a memoir of my mother. More will appear soon. I will try and continue to blog regularly at geofflepard.com about whatever takes my fancy. I hope it does yours too. These are my thoughts and no one else is to blame. If you want to nab anything I post, please acknowledge where it came from.
View all posts by TanGental →
This entry was posted in miscellany, walking and tagged Kent, margate, walking. Bookmark the permalink.

36 Responses to Thanet, A Walk On The Not So Wild Side #walking #kent