In my mini series of poems based on famous first lines I’ve stolen a hymn from Willie Blake, a local resident in East Dulwich back when Peckham was cool and Prime Ministers has problems with Ireland… like now really only without leopard print shoes…. 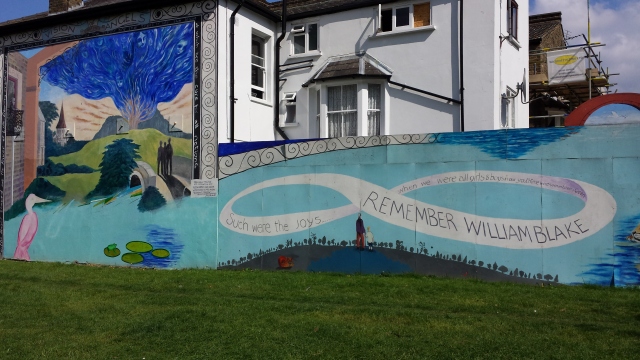 And did those feet in ancient time

Because that would explain why mum can

Not get her beige shag pile clean.

She blamed the dog and had a fit

Which meant she needed her pink pills.

They make her see all kinds of stuff;

An oiled hunk and other thrills.

Give her his spear of burning gold

She’ll put an arrow in his desire,

And join the boy soprano choir.

And other grim and grubby lands.

The pictures are from my garden last week

My name is Geoff Le Pard. Once I was a lawyer; now I am a writer. I've published several books: a four book series following Harry Spittle as he grows from hapless student to hapless partner in a London law firm; four others in different genres; a book of poetry; four anthologies of short fiction; and a memoir of my mother. I have several more in the pipeline. I have been blogging regularly since 2014, on topic as diverse as: poetry based on famous poems; memories from my life; my garden; my dog; a whole variety of short fiction; my attempts at baking and food; travel and the consequent disasters; theatre, film and book reviews; and the occasional thought piece. Mostly it is whatever takes my fancy. I avoid politics, mostly, and religion, always. I don't mean to upset anyone but if I do, well, sorry and I suggest you go elsewhere. These are my thoughts and no one else is to blame. If you want to nab anything I post, please acknowledge where it came from.
View all posts by TanGental →
This entry was posted in gardening, miscellany, poems, poetry and tagged hymn, Jerusalem, poem, William Blake. Bookmark the permalink.