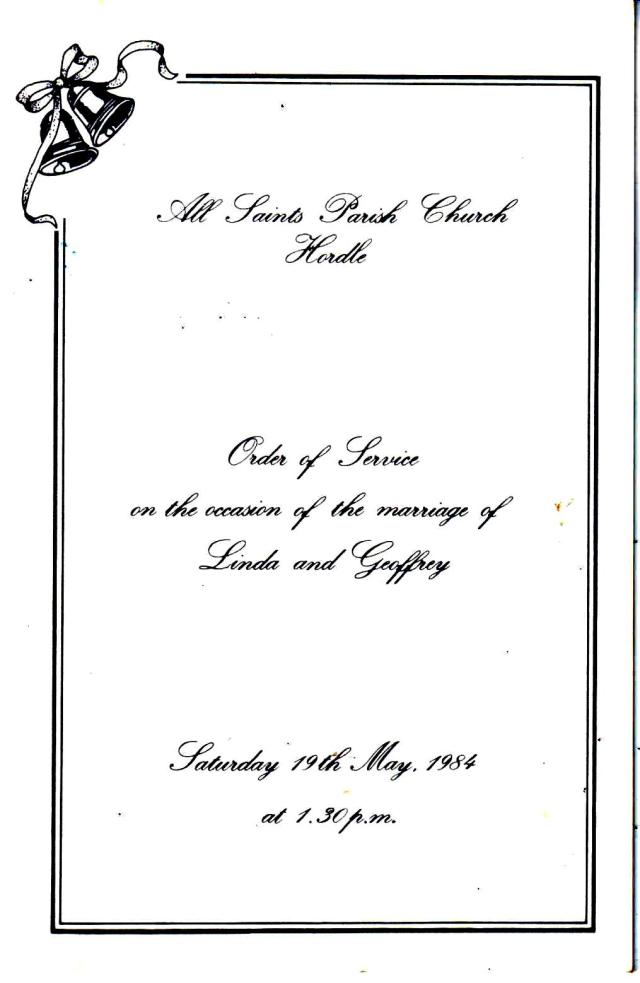 This year’s Bloggers Bash takes place on 19th May. Some people have noted there is a Royal Wedding and the FA Cup final that day, but it also has another claim to fame and one of which attendees need to be cognisant:

(apparently you give gifts made of freshly baked grins, sprinkled with cardamon-scented sniggers)

In celebration of this confluence of confabulatory congratulations, I take you back to that rather big day in the life of this particular Le Pard. Part 1 is here. This is Part 2. I’m OCD like that …

I suppose it was only fair. I mean it was because I had two ancient grannies who couldn’t really travel that we decided to get spliced in Hampshire rather than Norfolk. And it’s customary that the bridegroom doesn’t see the bride on the morning of the wedding. So it was determined I would spend that last night at my uncle and aunt’s – with my gorgeous if congenitally exuberant cousins and my best man – who had the hots for one, maybe both cousins and vice versa. There’s nothing like a distraction of the hormonal sort to keep one’s mind unfocused.

No problem, then. Except I slept in the floor like a trainee pretzel, woke to a slobbery Labrador kiss (well, I’m not telling it any different and for all his failings my best man doesn’t – well, back then at least  didn’t – drool) and had to be encouraged to eat the mountain my preternaturally cheerful uncle cooked for us as a breakfast. 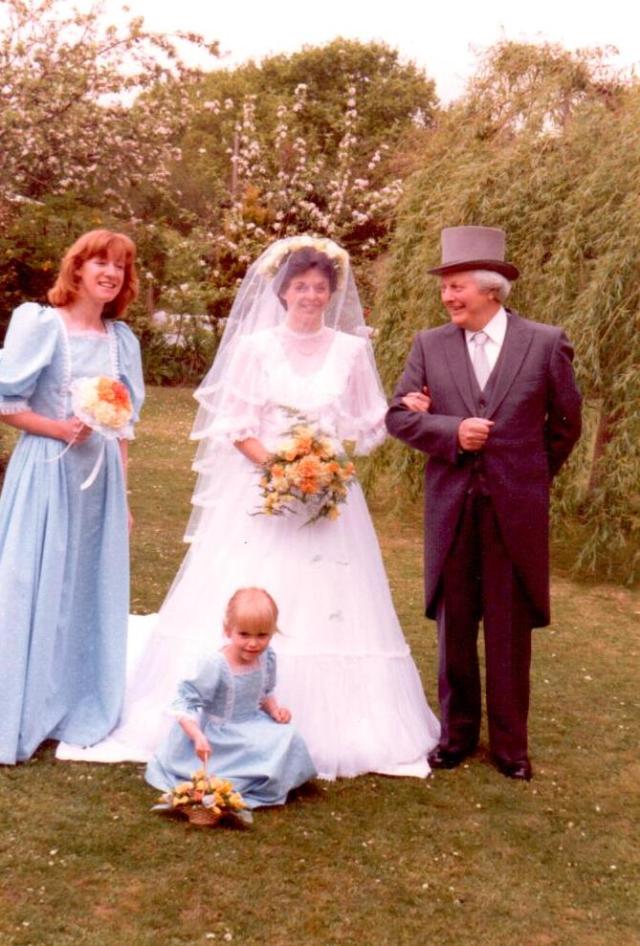 I was wearing a morning suit – though after what the tortuous night and the mountain of carbs had done to my innards and outards, mourning might have been nearer the mark – in a fetching grey with a top hat that wobbled disconcertingly. The wedding was set for one thirty – why did that feel an odd time for a wedding? Maybe it’s that the meal after is a breakfast, which I’ve never really understood – so we had to kill a little time.

Why do people assume you’ll be nervous? The Textiliste and I had been going out for seven years. We’d lived together – cohabited, that’s the rather antiseptic descriptive that was used then – for two years. She was not rash, impulsive, given to flighty moments. The only reason she wouldn’t turn up was alien abduction or she’d passed an open house that promised extraordinary quilts on the way to the church. Yet the emotional water boarding of that much repeated phrase, jokey as it was, began to play mind games with my viscera.

‘You need a sharpener,’ This from my uncle.

Was it his nerves that were the issue? Had he pawned the ring? Concocted a deliberately provocative speech? Been utterly inappropriate with my cousins?

‘We’ll stop at the Wheel on the way.’ My uncle was nothing if not persistent. 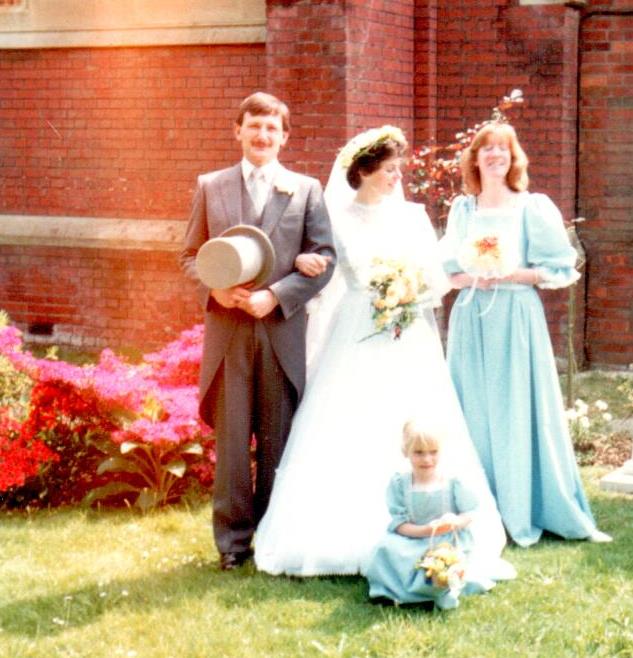 Have you prepared for a big performance by ingesting raw ethanol? For that was what came out of the bottle marked ‘skotch’ that sat, dust encrusted behind the bar. Putin might consider it as a toast for his enemies next time. It drills holes in the lower intestine in seconds.

What it doesn’t do is grant the imbiber Dutch or any other European national courage.

I did a stupid thing. I’m not entirely at fault. I was advised to ‘down it in one’. I suppose, rather like touching a hot surface, if you do it gingerly with appropriate circumspection, you pull away quickly and don’t try it again. Had I sipped this colourless death-water I might have merely disabled my tongue for a decade. As it was I compromised the viability of, sequentially, my oesophagus, my throat, my stomach – where my stomach acid put up a show of attacking this enemy – and when it surrendered, both intestines, a partial kidney and my bladder.

That can be the only reason for the tsunami in my gut and my urgent and continuous urge to pee.

No one believed me when I blamed the drink. ‘You’re just nervous.’ ‘Have another.’

I still recall standing at the front of the church watching guests arrive. Some waved, all smiled, one or two attempted a conversation. Did I reply? Did I sound coherent? No idea. By this time all my energies were gastrically distracted.

And then from somewhere above our heads, the organist – who had been eviscerating gerbils upto this point in what was billed as a warm up – burst into a Bach Cantata and a vision in white appeared. Initially I assumed death had arrived but since death hasn’t, to my knowledge, ever self identified as a bride, I re-calibrated. The Textiliste. My abdominal balm. The ultimate stomach settler.

All was well. The skotch morphed into ambrosia, Mum grinned, Dad looked at his watch, wondering when he would be getting that first pint and she was by my side. 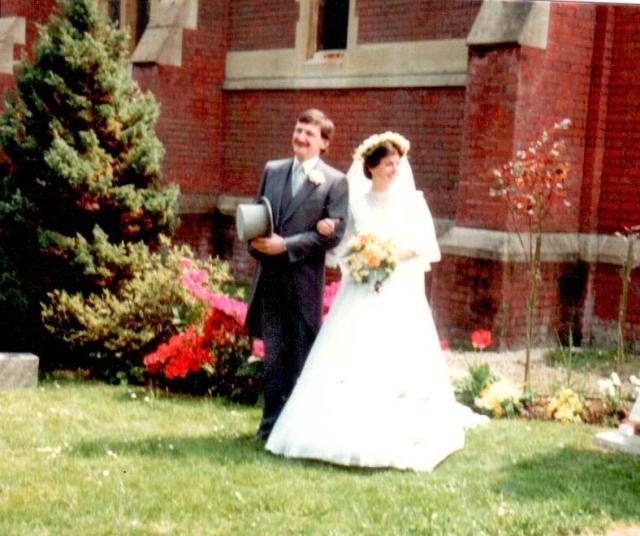 Now I had one, maybe two worries. Would I make a nob-bollock of my vows and find I’d married the neighbouring pew, and would I fart when I knelt for the blessing? And what had my sodding best man written on the soles of my shoes that caused the congregation to snigger when I finally dropped to my knees?

She smiled. She had freesias in her posey, daisies in her hair, my heart in her hands. Her father fought a losing battle with her train and deferred to her chief bridesmaid who, competence personified, brought it under control.

Do I remember the next half hour? Not a jot. I assume I’m married but equally I could have given my body to medical experimentation or bought an unconscionable quantity of double glazing. Heck I might even have eaten marmite soldiers and still I’d be smiling. 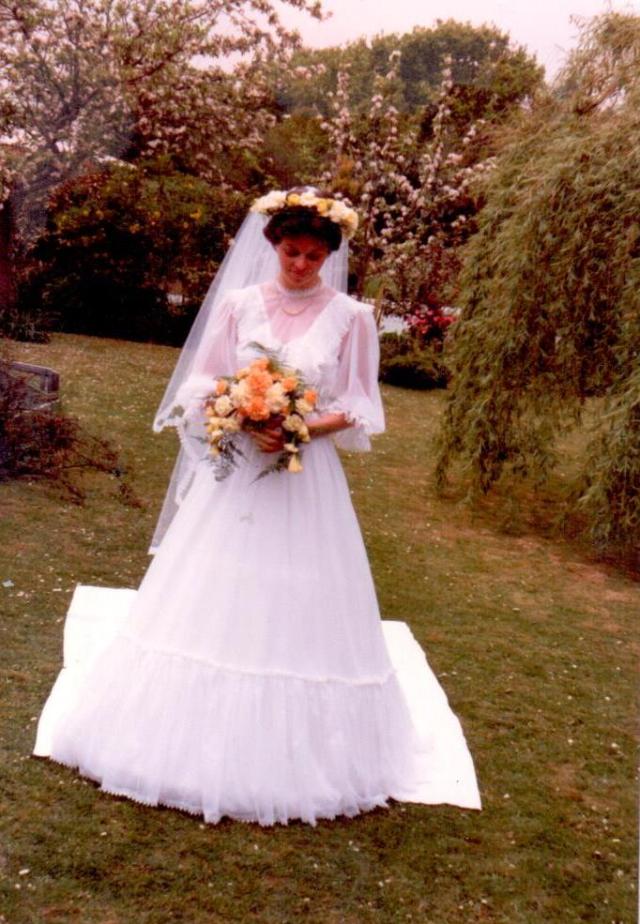 And if anyone needs patio doors or a fourth kidney, let me know…

PS We actually wanted this version of Bach by a band popular in the 1980s called Sky. This was a hit for them in 1980. We kind of thought it might be neat to rock the casbah a bit but Hordle Parish Church in 1984 wasn’t really ready for our subversion..

Next time it’s the reception…

My name is Geoff Le Pard. Once I was a lawyer; now I am a writer. I've published four books - Dead Flies and Sherry Trifle, My Father and Other Liars, Salisbury Square and Buster & Moo. In addition I have published three anthologies of short stories and a memoir of my mother. More will appear soon. I will try and continue to blog regularly at geofflepard.com about whatever takes my fancy. I hope it does yours too. These are my thoughts and no one else is to blame. If you want to nab anything I post, please acknowledge where it came from.
View all posts by TanGental →
This entry was posted in family, humour, memories, miscellany and tagged 1984, Hordle, wedding. Bookmark the permalink.