A Little Bit Of Spring Romance

On the 23rd March 1952 my parents married in Twickenham. It had taken them eight years from their first date to reach that point. But their meeting has always struck me as the most romantic thing about them and as a sort of memory here’s a post I did about that moment which, at least to me, bears repeating (originally I put this up in 2014 – how time passes)

In 1944, my father, Desmond Le Pard, was seventeen, my mother, Barbara Francis nearly a year older. Dad, like many young men wanted to join up; but he hankered to fly and the RAF were being picky. The MoD needed ground troops – cannon fodder as Dad saw it. So, having matriculated (sort of the GCSEs of their day) from Caterham School (he would proudly tell you it was on a  full scholarship – the son of a tailor living in a council house, he had no silver spoon) he went to work at County Hall until he could join the ‘Few’. There he found his immediate boss was a woman and a glamorous one, too.

Was he intimidated? You bet he was. She had poise, class and a certain aloofness that kept the young buck at bay. He needed a stroke of luck – Serendipity if you like – for a purely business acquaintance to blossom into something more.

So, enter stage right a V1 bomb. More accurately it came from the south, from France, phutt-putting its way towards the Houses of Parliament. Back then, young people like my parents were a trifle blasé about such things. They had seen or heard about so much carnage that another bomb, one they could see, gave them a certain frisson of excitement. On that hot summer day, the youngsters in the office crowded to the window on hearing that familiar rattling drone. No doubt they wanted to see it crash – not really thinking about the likely death that followed. They weren’t indifferent to it so much as inured.
To have a better view my five foot five mother climbed on a table by the open window with a couple of others and the chatter grew as they waited. Perhaps it was that chatter that distracted them from the fact that the V1’s motor had stopped. By that time everyone knew that a few seconds after that echoing silence, the bomb would explode. Dad heard, though. He knew. He grabbed the nearest woman and hauled her to the ground, moments before the explosion sent glass flying everywhere.

Maybe there was some exaggeration in that first rough physical introduction. What’s not in doubt is it gave Dad the necessary courage and prevented Mum from rebuffing her suitor. And possibly the gods were still smiling when, on their first date and due to overcrowding and some paternal incompetence, Dad lost Mum at Leicester Square tube station. My sense of Dad back then was an tough little sod, one with several little chips about his person concerning who he was and how he was perceived. But the one thing he always had was the ability to mock himself, to send himself up. That trait would endear him to Mum more than any other. That facet of his character helped bind them together and the laughter that ensued from another example of Desmond’s cock ups kept them together until Dad’s death in 2005. 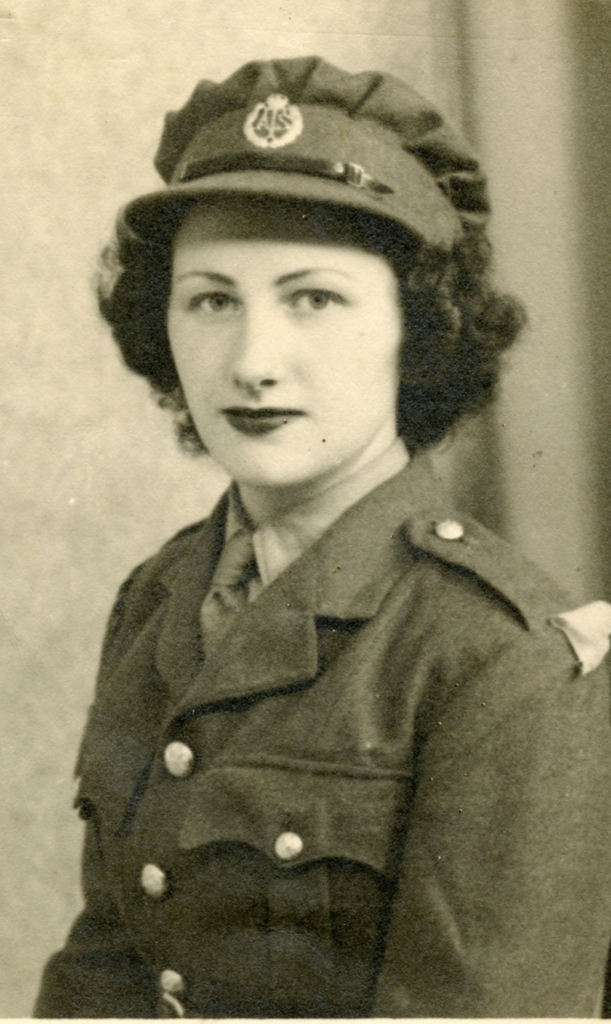 This is a nice story but why tell it here, beyond a certain filial pride? Well shortly after that first date Mum joined the ATS to drive trucks and tanks and heaven knows what, leaving Dad behind to stew in London, feeling guilty that he was missing the ‘Show’ and anxious at what was happening to his new girlfriend. So he wrote letters. 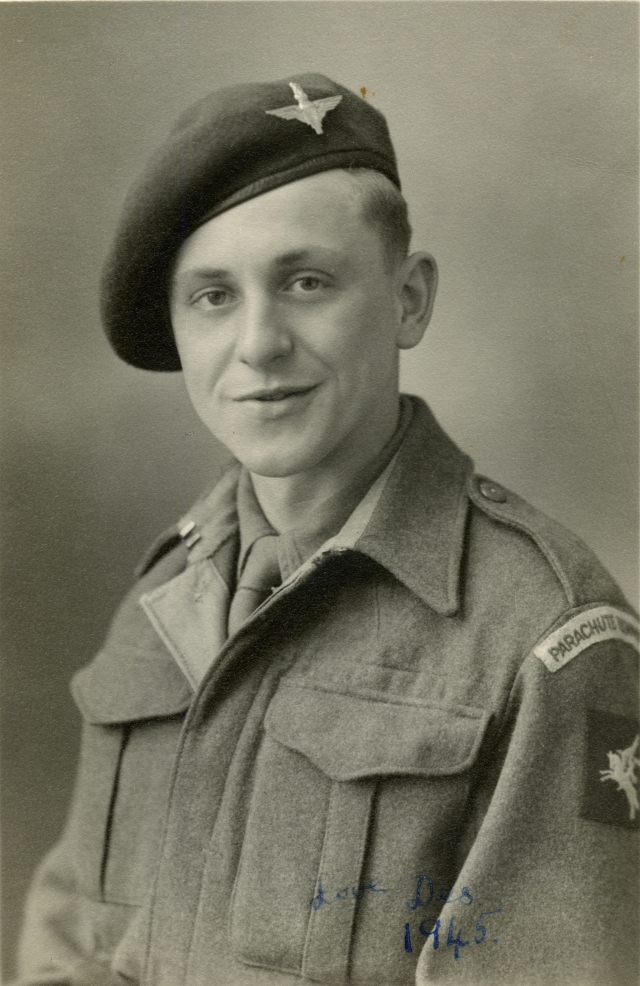 Once, twice a week from the end of August 1944 until his own demobilisation in 1948. I knew nothing of these letters until the Archaeologist and I were clearing out Mum’s bungalow after her death in 2010. In a shoe box, at the back of a wardrobe I found them, neatly preserved in their original envelopes. Mum’s hoarding was a thing of family legend.

‘You never know when it might come in useful’ was her answer to Dad’s exasperation at the impossibility of getting into the loft/shed/back-bedroom and something blocked his passage. When we moved her to the bungalow in 2006, she had tins of fruit from before sell-by dates were introduced to cans in the 1970s.

Those letters, one sided though they are – Dad was never the sort to keep Mum’s replies, at least not back then – give a fascinating insight into the lives of two young people as they struggled with the challenge of falling and staying in love despite the distance caused by war and its aftermath. Somehow they kept it going, mostly by these letters. They tell of their sometimes mundane lives as well as reporting on the many incidents as the war in Europe began to turn the Allies’ way. You discover a man discovering himself. Politically angry – he would have been a communist if his father wouldn’t have killed him for it – full of bluff and bluster and the coarseness of the young male schooled in a tough environment, the young romantic had his darling Barbara to thank for keeping him sane. You follow him to Palestine as part of the British forces trying to hold the warring Jewish and Arab factions at bay pending Partition. 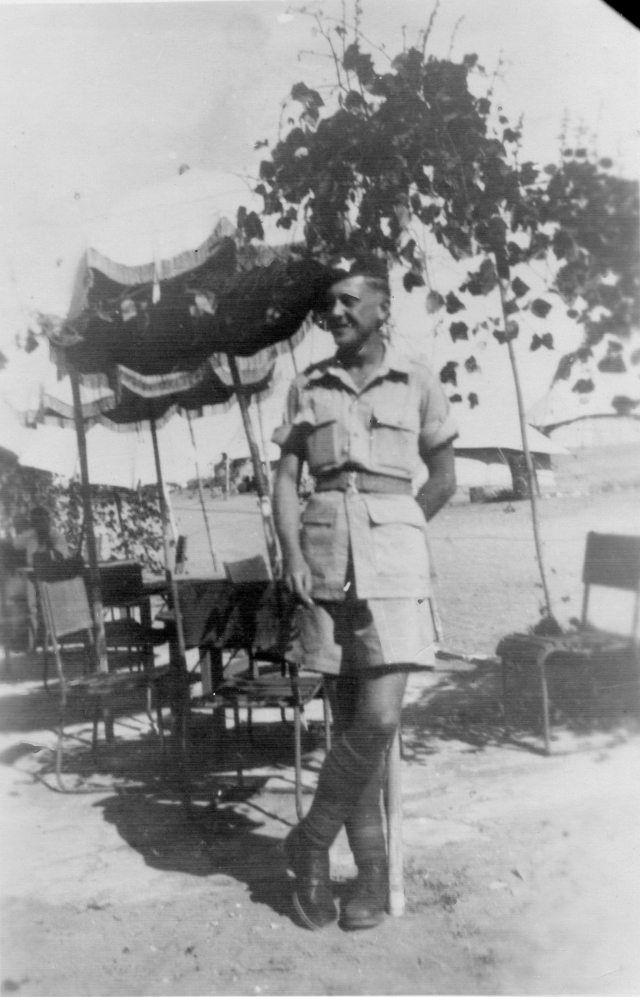 It gave him an outlet for his poetry too; a lot of it is rough and ready but some, like the one he wrote just before his first ever parachute jump, is spine-tinglingly poignant.

I transcribed some letters and scanned others and you will find them under the tabs above I hope you enjoy them. For me, well they still make me smile and cry at the same time.

My name is Geoff Le Pard. Once I was a lawyer; now I am a writer. I've published several books: a four book series following Harry Spittle as he grows from hapless student to hapless partner in a London law firm; four others in different genres; a book of poetry; four anthologies of short fiction; and a memoir of my mother. I have several more in the pipeline. I have been blogging regularly since 2014, on topic as diverse as: poetry based on famous poems; memories from my life; my garden; my dog; a whole variety of short fiction; my attempts at baking and food; travel and the consequent disasters; theatre, film and book reviews; and the occasional thought piece. Mostly it is whatever takes my fancy. I avoid politics, mostly, and religion, always. I don't mean to upset anyone but if I do, well, sorry and I suggest you go elsewhere. These are my thoughts and no one else is to blame. If you want to nab anything I post, please acknowledge where it came from.
View all posts by TanGental →
This entry was posted in family, miscellany and tagged ATS, family, memories, Palestine, Parachute regiment, war. Bookmark the permalink.

38 Responses to A Little Bit Of Spring Romance