Christmas is the time for gifts and surprises and peace on earth and all that. It’s also when traditions are dusted off, the bulbs are checked and given an airing. In our house we play charades at some point, watch Love Actually, go for a morning walk in Christmas day, make a large wood fire where we open presents and eat our weight in food.

Sometimes the experience of reliving a memory which is what traditions are after all can disappoint. Not because they are wrong or they fail in their desired objective – charades can be flat if the timing is wrong, the walk can be disrupted by the weather, the food can be just a smidge too much (no, ok that’s never happened).

Seeing the Last Jedi felt a bit like a Christmas tradition, from the opening music and credits sliding at a angle over the screen, describing events in a galaxy somewhere beyond Penge, which is far far away at Christmas, or at least ought to be. The hype was rather encouraging though, and all the reviews I’d read were either four or five stars, from reviewers I rather respect.

So, armed with a  rather excellent coffee and, sharing some decent popcorn (which is the definition of hypocrisy given how I hate the rustling, crackling, masticating cacophony that usually accompanies other’s popcorn) I took my seat.

Where do you like to sit? Me? At the back in the middle which sadly wasn’t available when I booked but the seats were empty both when I sat down and when I left. That was annoying. Did it make a difference to my enjoyment? Maybe. 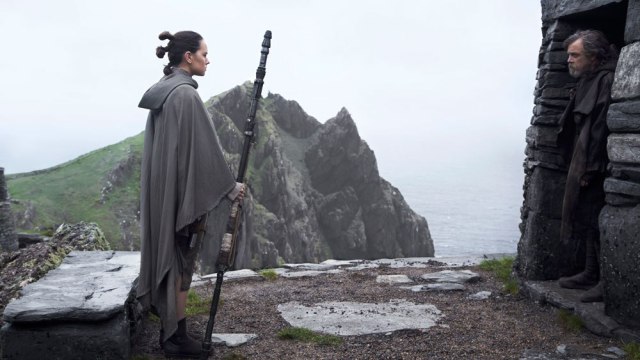 You see, the Last Jedi is great and bloody irritating at the same time like a tradition that fails to live up to the memory. The film is essentially two themes: Rey finding Luke Skywalker – she ended the last film with him on this rather bleak island – and trying to persuade him to give up his exile; and the usual rebels against the baddies, holding out against the odds yet always, it seems, destined to be destroyed.

The special effects are wondrous – but you expect that like always having decent rum butter with the pud – and the characters of old that haven’t already died are all there. But the hole in the movie is Hans Solo – is Polo was the mint with the hole, Solo is the hole in the film. They sort of try and fill it with Skywalker becoming a curmudgeon in organic knitwear but these bits of the film just drag – all this Jedi-as-a-religious-experience-‘the-force-is-balance-dark-and-light’ stuff is baloney. The dialogue is wooden and from the bleedin bloody obvious playbook and, frankly Rey doesn’t have the acting ability to carry this piece. Back at the interminable battle, the character twists are actually nicely done and, yes the special effects still capable of driving you back into your seat.

True there is another relationship element, and other story lines that get you thinking and I won’t plot spoil by describing them here; suffice it to say they keep the film – which is really overlong – just the right side of disappointing. A bit like some of Christmas.

The surprise was the next film we saw. Wonder is a weepy, a feelgood, a disfigured boy starting school having been home schooled, having to find a place, over come the bullies, show courage with his friendships and open others minds with his resilience. All formulaic, all potentially meah. But here we had a thoughtful script, fab performances particularly from Julie Roberts and Owen Wilson (Who knew? He can act). The use of a device whereby each leading character was given a scene from their point of view worked well to develop the nuances needed to make this thing subtle rather than smug.

And the child actors were excellent. I’m not sure what has changed but recently I’ve seen a number of children in films and they’ve been great, nuanced and believable. A damn sight better than those planks who took the lead in the Potter movies. I recommend it as an unchallenging piece of cinematography.

My name is Geoff Le Pard. Once I was a lawyer; now I am a writer. I've published four books - Dead Flies and Sherry Trifle, My Father and Other Liars, Salisbury Square and Buster & Moo. In addition I have published three anthologies of short stories and a memoir of my mother. More will appear soon. I will try and continue to blog regularly at geofflepard.com about whatever takes my fancy. I hope it does yours too. These are my thoughts and no one else is to blame. If you want to nab anything I post, please acknowledge where it came from.
View all posts by TanGental →
This entry was posted in Film, miscellany, review and tagged films, reviews, the last jedi, wonder the movie. Bookmark the permalink.