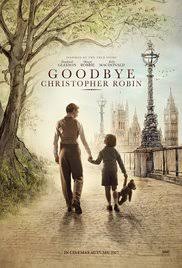 You wonder at some people. I enjoyed Philip Pullman’s His Dark Materials trilogy so, as a sort of instinct I thought only good of the man. Then, a few days ago he was interviewed in a National Sunday, dissing Winnie the Pooh and Wind in the Willows. Utterly unwarranted and exposes the inane arseholey in the man.

And then again AA Milne, author of Winnie the Pooh, famously dissed PG Wodehouse in a spat covering many years and that, too is unforgivable. The creator of Bertie Wooster cannot be treated thus.

What Wodehouse did in  return was to accuse Milne of exploiting his son, the eponymous Christopher Robin, for financial gain and self aggrandisement. He wrote the same into a story and Milne, humourless to the last never forgave him.

Which is one of the themes of my latest cinematographical experience, GoodBye Christopher Robin.

This is a good film, taking its start point when AA and his wife think Christopher Robin has been killed in action during WW2. We then back track to Milne Senior after WW1 and him trying to cope with the aftermath, the recurrent horrors. How bees terrified him, as reminders of the flies on the corpses in the trenches, or an exploding balloon taking him back to nightmarish bombardments. He is portrayed as an ardent pacifist throughout though history suggests that was on the wane by the end of the 1930s.

His wife, all brittle self control apparently masking a crippling lack of self confidence, is characterised as the driving force behind both Milne writing the Pooh stories and then exploiting their son to publicise them. Maybe that is unfair on her.  Milne is also guilty through his own wilful ignorance. Eventually he realises what he is doing but not before the little boy is dragged from his childhood into the adult world with little regard for the impact it is having on him.

Ashdown Forest, inspiration of the 100 acre wood and all things Pooh

The themes aren’t unexpected, given this is pretty well known territory (though there is depth in how the film lets you understand the reasoning behind how it came about); what was well done was a form of reconciliation between father and son, or maybe of understanding at some level: when CR realised that many of his fellow servicemen adored his father’s books simply because they took them back to the safety of their childhood memories and relieved them from the horrors of war, even if only briefly, the film suggests that some of his anger dissipated.

In fact they remained estranged.

But the tweeness of the stories is where in effect we find the substance of Pullman’s criticism. That the stories do not prepare children for adulthood. That they aren’t what children want but rather are how adults perceive childhood. The return to that place of safety, of unbridled happiness.

And it’s true; adults want to preserve while children want to escape. But really, did I… did my children… ever begrudge being read to about Pooh and Piglet? Or Moley and Badger come to that? Of course not. So back off Pullman. That bear isn’t for baiting. Not on my watch. It may lack some historical accuracy but this a film to escape into, at least for a while.

Apparently there is a shortage of good vanilla at the moment which meant an absence of my usual at the gellateria opposite the East Dulwich Picturehouse – While there I noticed a new cheese shop had opened, a sure sign of excessive gentrification, next door, which I suppose I will have to trial. Back to the gelato;However the latte version was an acceptable alternative, if a little weak, flavour-wise. And reasonably priced considering the market hereabouts is all Tim and Tina cullottes and chia-infused organic cat food. 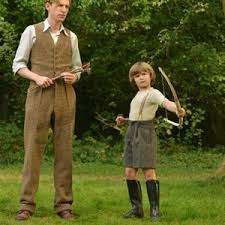 My name is Geoff Le Pard. Once I was a lawyer; now I am a writer. I've published several books: a four book series following Harry Spittle as he grows from hapless student to hapless partner in a London law firm; four others in different genres; a book of poetry; four anthologies of short fiction; and a memoir of my mother. I have several more in the pipeline. I have been blogging regularly since 2014, on topic as diverse as: poetry based on famous poems; memories from my life; my garden; my dog; a whole variety of short fiction; my attempts at baking and food; travel and the consequent disasters; theatre, film and book reviews; and the occasional thought piece. Mostly it is whatever takes my fancy. I avoid politics, mostly, and religion, always. I don't mean to upset anyone but if I do, well, sorry and I suggest you go elsewhere. These are my thoughts and no one else is to blame. If you want to nab anything I post, please acknowledge where it came from.
View all posts by TanGental →
This entry was posted in Film, miscellany, review and tagged Aa milne, film, goodbye Christopher Robin, PG Woodhouse, Philip Pullman, review, shell shock, WW1, WW2. Bookmark the permalink.