My first book, Dead Flies and Sherry Trifle is now three years old. At the time I published it I still had a lot to learn. One aspect was the cover. I asked my nephew, whose career as an artist and model maker has seen him work on a number of big picture movies, and his cover was great. As a one off.

But now that I’m about to publish my fourth novel (15th July, peeps, keep the date) I want my covers to have some familiarity; I want someone who picks it up to recognise something of the style. And this has led me to conclude I need a new cover.

George Grey at Roylaston Design has done the covers for all the other novels I’ve published (he also did the cover for Hugh Roberts’ wonderful ‘Glimpses’) and he’s come up with some ideas. As I’m a democratic sort of cove, I’d like to have your reactions to these before I choose.

In case you haven’t read Dead Flies yet – what! Surely some mistake!! – here is the blurb that appears on the back cover of the paperback.

And here are the four possibilities: 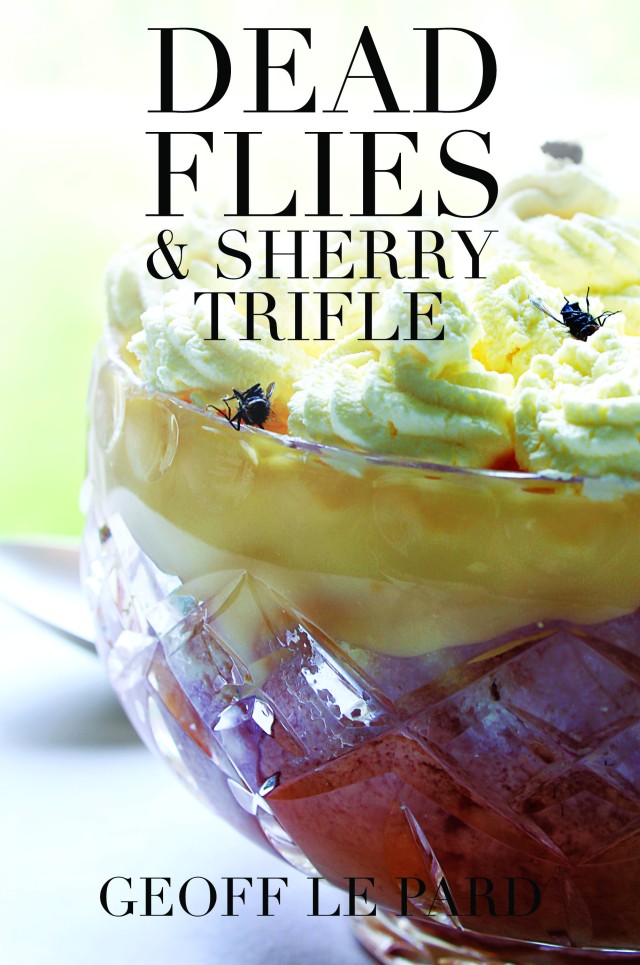 Oh, and in case you’re wondering, I made the trifle and no flies were hurt in making this post – they’d already crashed and burnt. And yes, I ate the trifle….

Anyone spot the deliberate error? Yep, it will be ‘and’ in the final version and not ‘&’. Just saying before you do…

My name is Geoff Le Pard. Once I was a lawyer; now I am a writer. I've published four books - Dead Flies and Sherry Trifle, My Father and Other Liars, Salisbury Square and Buster & Moo. In addition I have published three anthologies of short stories and a memoir of my mother. More will appear soon. I will try and continue to blog regularly at geofflepard.com about whatever takes my fancy. I hope it does yours too. These are my thoughts and no one else is to blame. If you want to nab anything I post, please acknowledge where it came from.
View all posts by TanGental →
This entry was posted in Books, cover reveal and tagged book covers, Dead Flies and Sherry Trifle. Bookmark the permalink.