I have been posting occasionally about a trip to Peru I took in October 1987. So far we have visited Lima, Arequippa and Puno, with a side order of the Colca Canyon. I suffered the most appalling altitude sickness. This picture rather shows me at my lowest 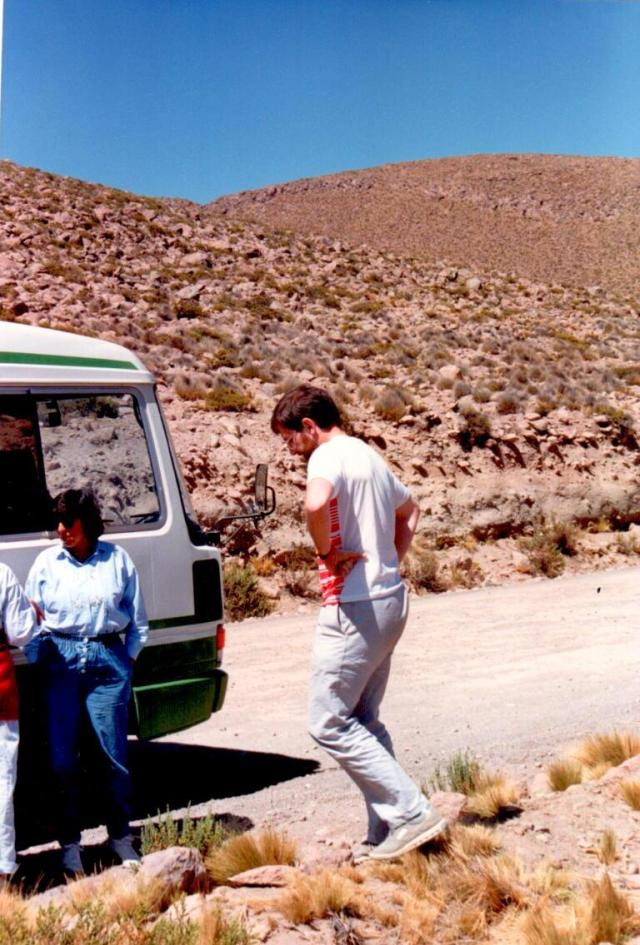 Even the Textiliste was concerned. 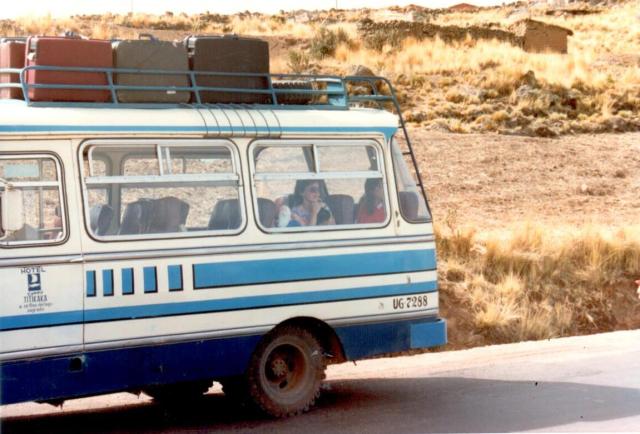 Last time we had just caught the Altiplano train to Cusco from where we intended on visiting Manchu Pichu, the expected highlight of the trip.

Train journeys in Peru proved to be eccentric and unnerving but they were nothing compared to a taxi ride and an internal flight. The flight will feature next time but the taxi ride was, well, barely credible. As you will soon see. 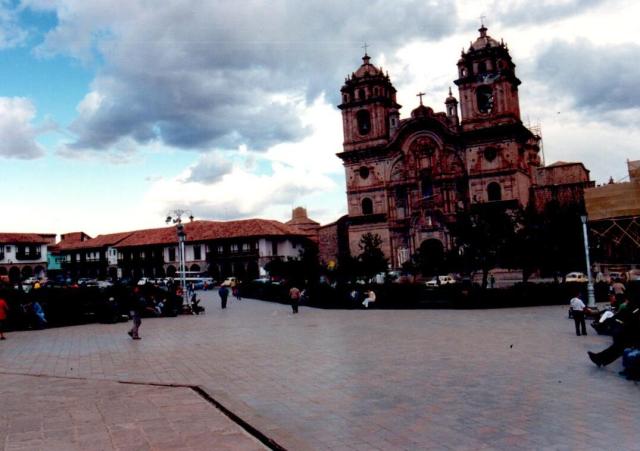 First however let’s take a walk around Cusco. This is a real Inca town that has had Catholicism and a Spanish style grafted on the top. Buildings show how the locals understood the earthquake risk better with low levels of the structures hailing from a time pre the European influence but with newer work on top.

Around and about there were archaeological sites to visit too, giving us a taste for the Inca’s ways of building and societies, with their emphasis on sacrifice, mostly bloody.

There were locals to photo too. At a suitable price. Though what price schooling than servicing tourists like me?

We took a guided tour of the centre that took in the cathedral, a rather drab building on the outside but full of your typical gold and Roccoco excess inside.

One of our party pointed to the figure of Christ on the cross. ‘He’s black’ Indeed he was, most unexpected. Someone else commented on how forward thinking this was while the guide laughed. ‘Hardly. The invaders used a local wood which, if untreated and exposed to the rain turns black. The first time they carried him on the Easter parade he changed colour. No one dared suggest it was anything other than God’s Will so black he stayed.’ 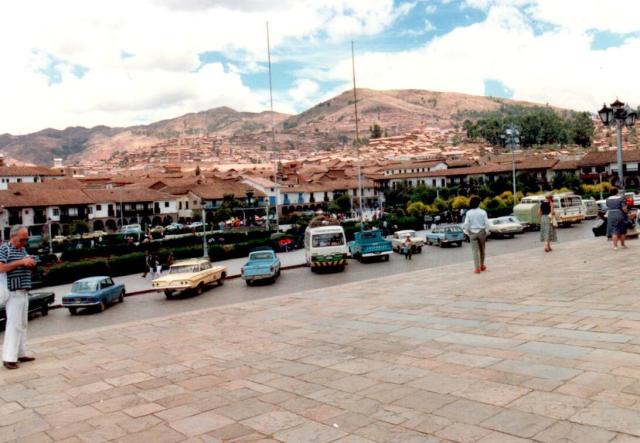 Our hotel was the most opulent of any we stayed in.

We were still admiring the splendour of the public areas when we were shown into our room. It had a balcony that faced a towering wall. The barracks. ‘Please don’t get caught taking photographs of the wall. It’s a crime.’ That was a first.

I tried their thick, molasses-like beer again – you’ll see one of our companions with a glass of it, like that awful pink medicine mum gave me by the tureen when I was a kid.

Perhaps a seed of doubt was sown by the comment on the barracks because that first night I was woken by the Textiliste. In a nervy voice she asked where she was. Being bat-eyed she had gone to the bathroom only to become disorientated on her return – yes, the room was that huge – and feared she might have wandered out onto the balcony and could tip over the parapet. In fact she was facing the door, not that she could see in the thick myopic dark.

We were scheduled to spend 3 days in Cuzso before heading off to Manchu Pichu. These days intrepid explorers go by the Inca Trail, a three day hike that allows a spectacular way into that extraordinary place. However what with the Shining Path terrorists liable to attack and a collapse of part of the walk, this option wasn’t open to us. So we had to await the train. Here’s an early sighter.

What to do? The hotel suggested taxi to a local market: ‘the produce is good’ and you can’t have too many alpaca pullovers, can you?

So off to Chincero it was, some 30 km from Cusco  and at nearly 4000 metres up into the Andes, a wondrous place to go.

Our driver appeared, looking like a matinee idol fallen on hard times or one of those door to door insurance salesmen of old. He took us to his car – not that ‘car’ does justice to his love affair for his American beast, the sort of car that these days you see in museums or Cuba.

It was super with one of those front seats that goes right across – the gear shift was on the steering stick. I slide into the front and peered at the windscreen. Starting top left and dropping to bottom right was a crack – not that you can see it in the picture – that mimicked the Andean peeks we saw as we set off.

He shrugged. ‘We need gas.’ This was to be on top of the fare we had negotiated, of course. But we soon didn’t care as we drove in regal splendour and real soft sprung luxury up into the mountains.

The village was all we could ask for and the market felt local and our bartering unforced. Perfect.

Clutching bags, we climbed back in. Our driver smiled and put the car in first. He fired the engine, got us rolling and turned the engine off. Slowly we gained speed to about 25 mph. After that we rode the brakes for some 25 kms and not once did he use a drop of fuel. He didn’t use the brakes much either come to think of it. I was in the front as buses careered past us and lorries, full of chickens and guinea pigs forced us into wide sweeps. Our driver never once put two hands on the wheel. Indeed, though I couldn’t swear to it because of his sunglasses, I think he might have dozed off. The car remained in control throughout.

Our time done we packed and headed to the station and the train. 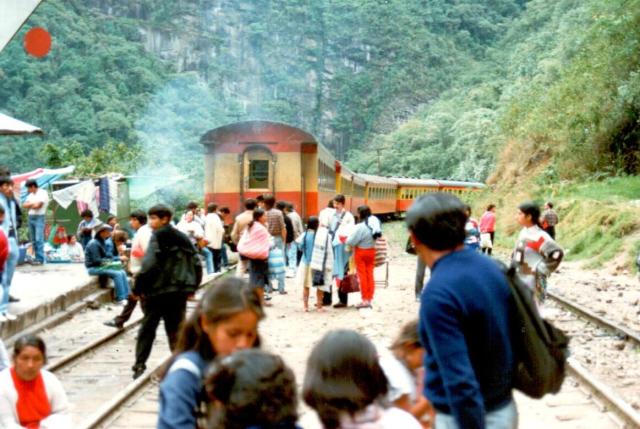 We were later to understand where Dr Doolittle got the idea for the pushmepullyou from, that curious two headed llama. But that’s for next time.

My name is Geoff Le Pard. Once I was a lawyer; now I am a writer. I've published several books: a four book series following Harry Spittle as he grows from hapless student to hapless partner in a London law firm; four others in different genres; a book of poetry; four anthologies of short fiction; and a memoir of my mother. I have several more in the pipeline. I have been blogging regularly since 2014, on topic as diverse as: poetry based on famous poems; memories from my life; my garden; my dog; a whole variety of short fiction; my attempts at baking and food; travel and the consequent disasters; theatre, film and book reviews; and the occasional thought piece. Mostly it is whatever takes my fancy. I avoid politics, mostly, and religion, always. I don't mean to upset anyone but if I do, well, sorry and I suggest you go elsewhere. These are my thoughts and no one else is to blame. If you want to nab anything I post, please acknowledge where it came from.
View all posts by TanGental →
This entry was posted in miscellany, peru, travel and tagged chincero, cusco, manchu pichu, Peru, travel. Bookmark the permalink.