Pond Life and A Visit

I had a surprise today. This.

In the spring of 2014, as he waded his way through his law exams, the Lawyer asked if we could build a pond in the garden. ‘If you dig it out,’ I said. 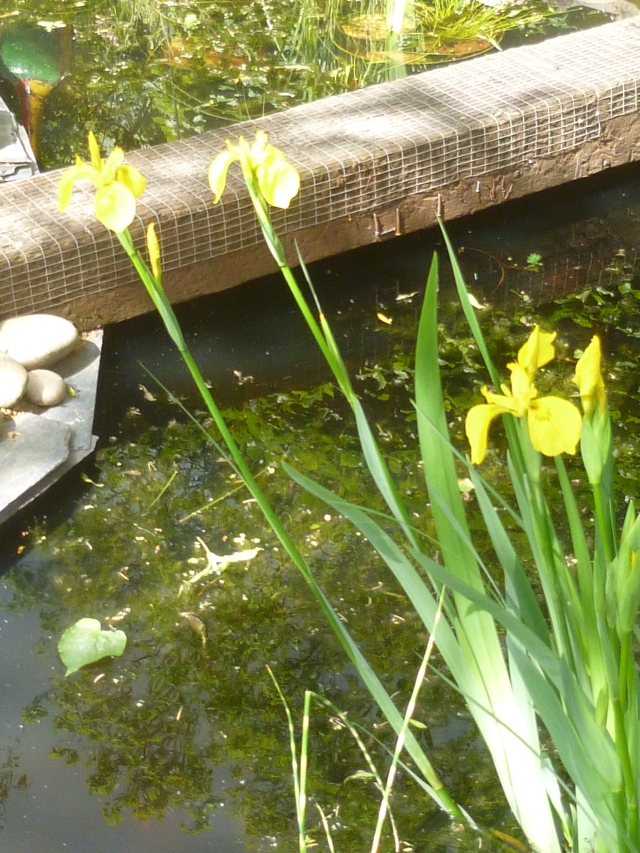 He meant it. He did most of it; I did some and some of his friends, emboldened by free beers did the rest.

Over a few weeks, beginning in July 2014  a hole appeared. 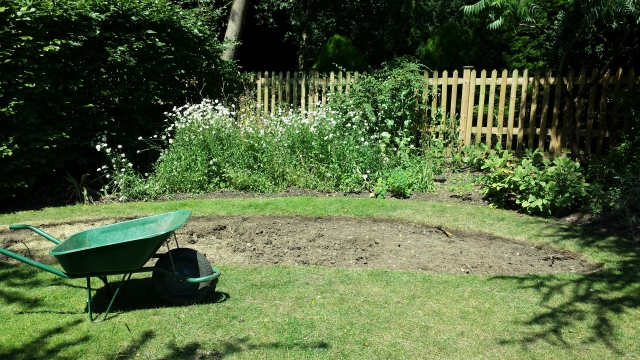 Then came a flash flood and we had a pond!

It wouldn’t last, even though we were digging into the clammiest, stickiest, disgustingest clay London’s substrata could throw up.

We were lucky to have at our side the Pond Guru (the PG). ‘You’ll need 2 tonnes of sand and a liner. I recommend hold slates as a lip before we make an edge to hold the liner in place.’

Was it really that complex. And then I was named for the bucket challenge. I do loathe my family at times.

But, having got this far we bought the gubbins and prepared for two hard days of pond building. 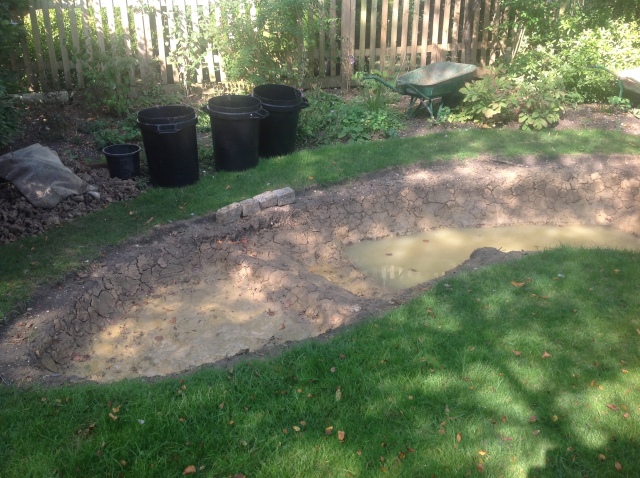 We emptied the water (that is, I emptied the rainwater) and the PG came round to set everything up.

We worked hard but…

After a full day in the sun…

We had a sand- lined hole, ready for the liner.

The next day the liner went in…

And we began to fill it with water. 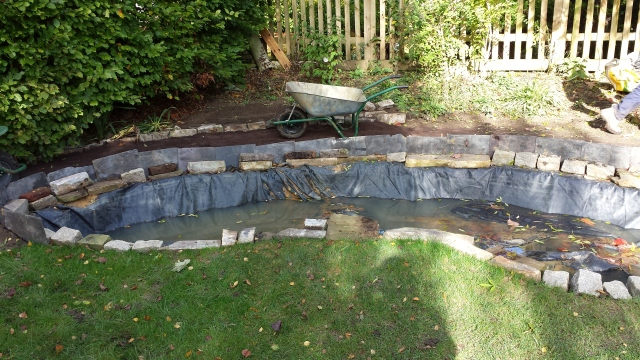 We were shattered. We agreed we’d leave it a couple of days and then finished the slate lip and edging. 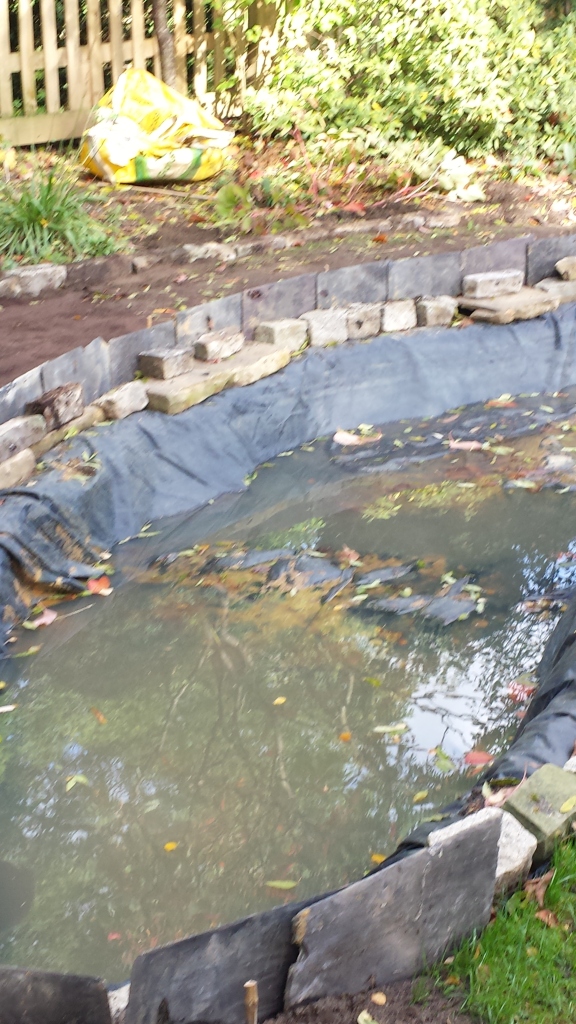 I dropped one and, of course, Sod being my personal Patron Saint, it shot to the bottom, sharp edge first and neatly and effectively pierced the liner. A one inch slit. That’s all. But it ruined the pond. It leaked, the liner swelled, the sand collapsed and we knew we would have to empty it, and dig it out, starting all over again. 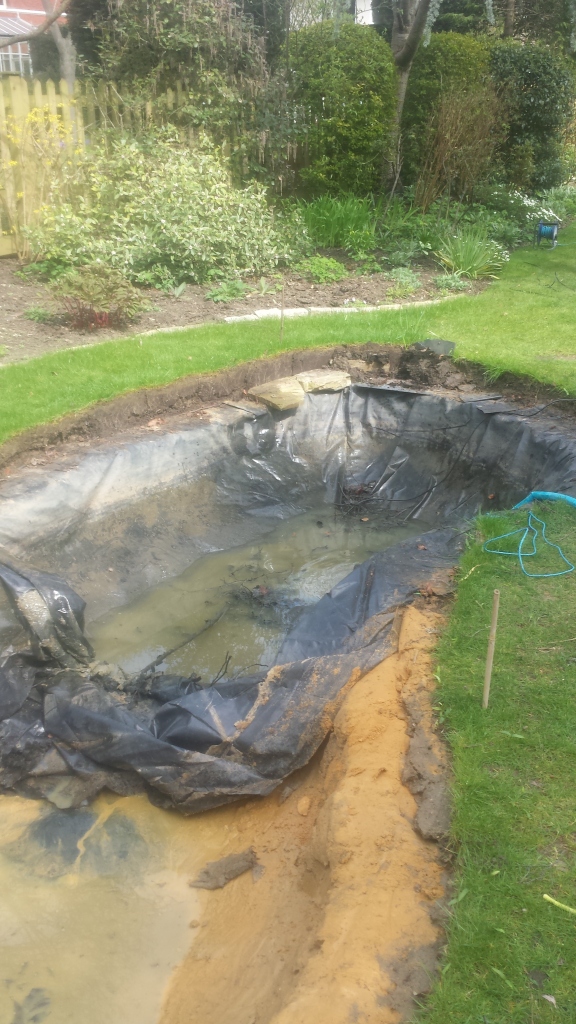 Everyone was a little put out by this; they were quite nice ‘Not your fault Dad/Geoff/You-Total-Tosswat) but I knew they didn’t really mean it. 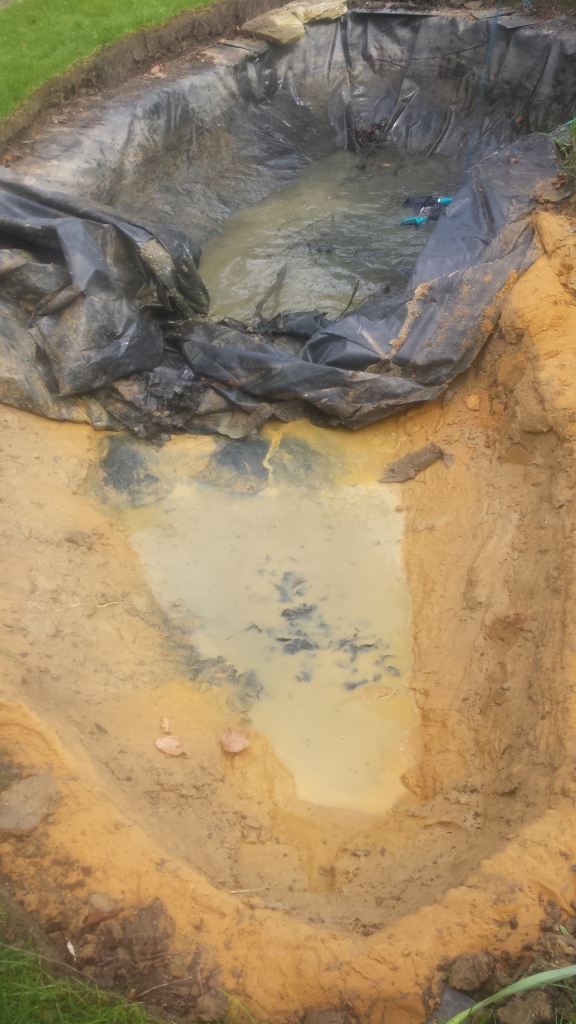 I sourced another liner; this one was made of vulcanised granite and you could drop a Stanley knife on it without the blade piercing it 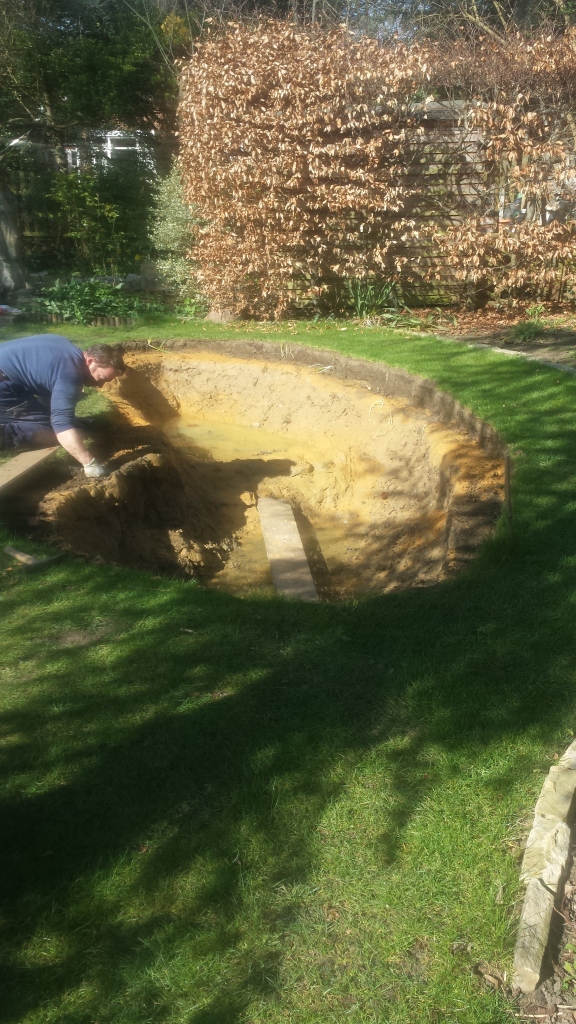 (a note for those who find themselves in the position of having such a quality product – take the word of the manufacturer – do not actually drop a Stanley knife on it: it will bounce and try and sever a necessary artery).

We waited until the spring and set too again, the PG and me – by now the Lawyer was revising for his finals and a little on the stressy side – lots of knowing looks and encouragement.

He did get involved in one innovation since the first attempt – the sleeper bridge which has proved to be a hit.

This time the sand lining and the liner itself went in quickly. We had prepared the logs and rocks that would edge the pond and numbered them carefully.

It was a far more professional operation and went very smoothly. In a way the delay did us a favour. 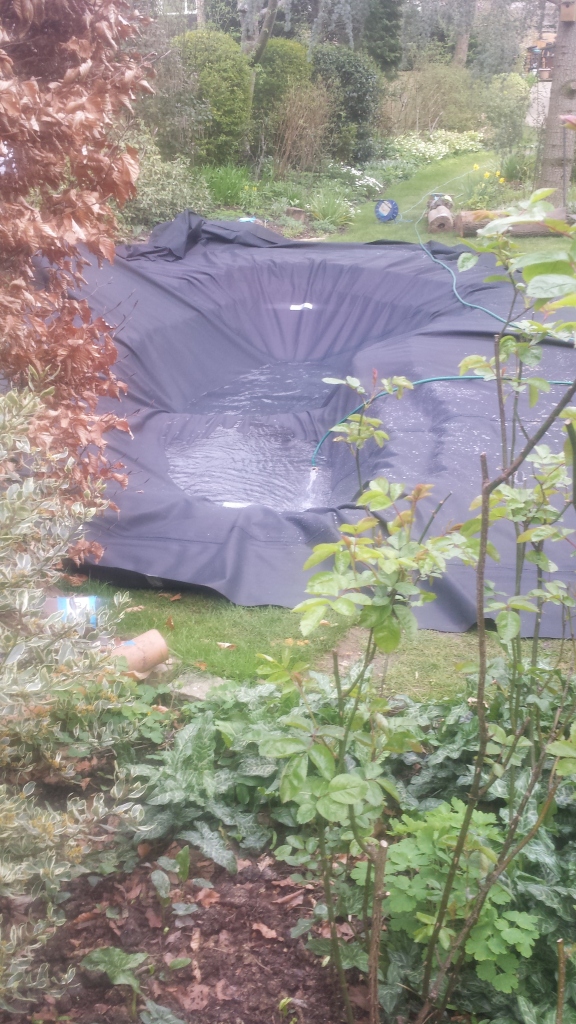 Soon enough, it became a focus for us – a happy place. Ducks visited, a heron and we acquired tadpoles and newts, multiple insects including dragonflies.

We thought they had mated but the life cycle of the dragonfly is mostly underwater so we couldn’t be sure. 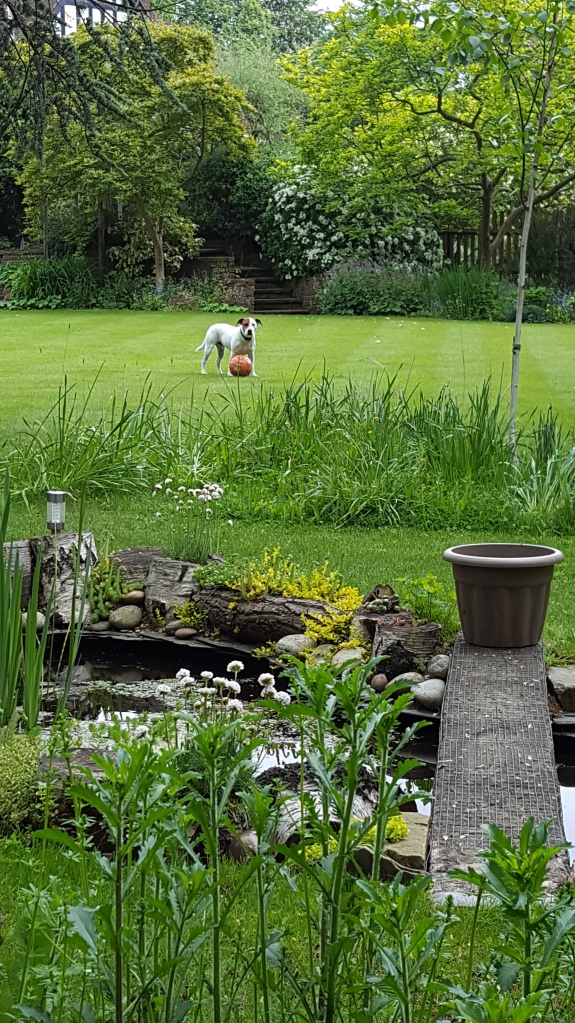 You have to await the nymphs crawling up the iris leaves and shedding their skins. Today, the first five appeared.

We have families of toads from the spawn and now dragonflies.

It remains a happy place, a family project and a reminder that 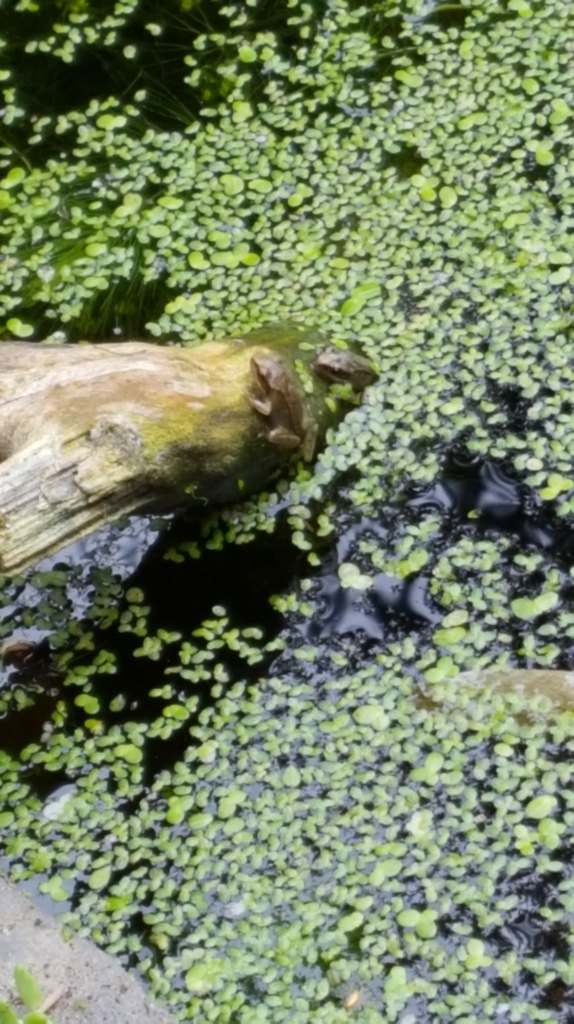 because without my depth-bombing slate

we wouldn’t have the pond we have today and may not be enjoying such prolific wildlife. You can’t put a price on such rank dumb luck. 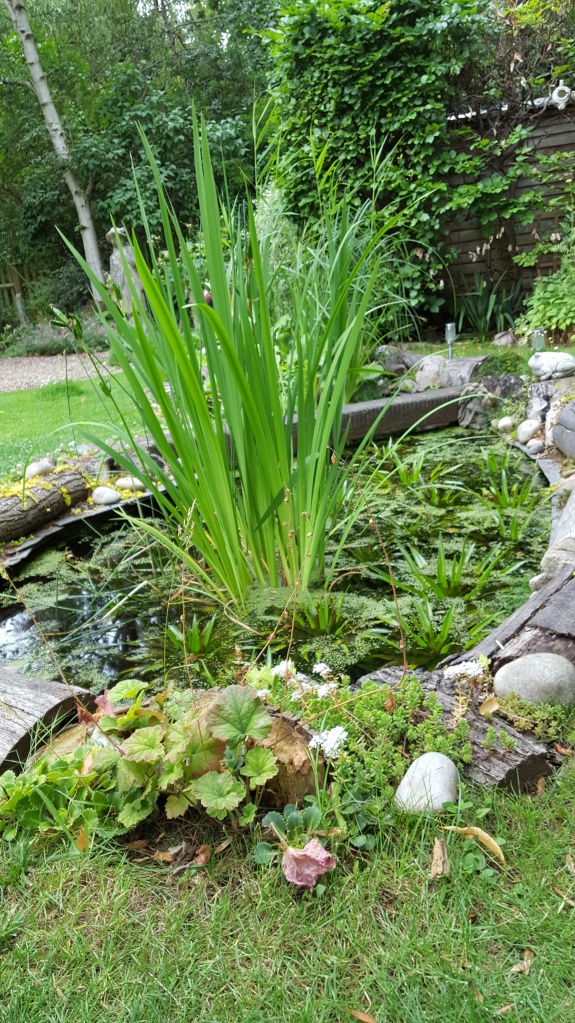 My name is Geoff Le Pard. Once I was a lawyer; now I am a writer. I've published four books - Dead Flies and Sherry Trifle, My Father and Other Liars, Salisbury Square and Buster & Moo. In addition I have published three anthologies of short stories and a memoir of my mother. More will appear soon. I will try and continue to blog regularly at geofflepard.com about whatever takes my fancy. I hope it does yours too. These are my thoughts and no one else is to blame. If you want to nab anything I post, please acknowledge where it came from.
View all posts by TanGental →
This entry was posted in family, gardening, gardens, ponds and tagged garden family, life lessons, pond. Bookmark the permalink.

23 Responses to Pond Life and A Visit