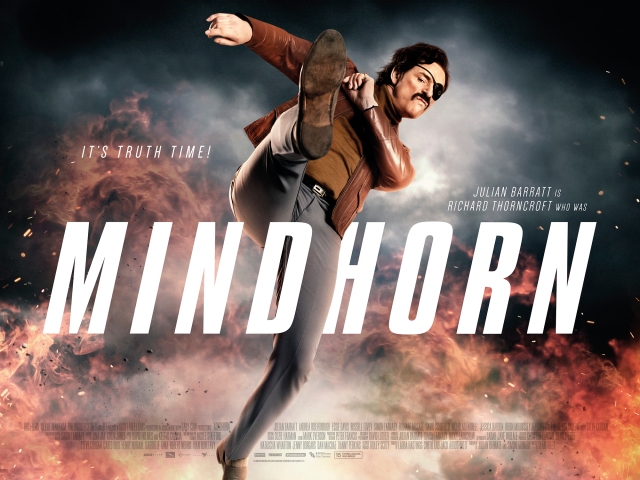 Well I knew it wasn’t an intellectual piece. I knew I wouldn’t be challenged or held in suspense. My expectations were of the ‘please let me laugh a few times’ sort which is probably a fairly accurate summation of my monthly bucket list.

And, of course, that is bloody hard. Humour is as personal as your toothbrush. It really cannot be shared with anyone. What makes me laugh? I can’t define it any more than I can blow raspberries on my buttocks.

Go to Alien the Umpteenth and you know you’ll be given dripping dank places where some monster will exit Dispensable Space Traveller (No 2)’s stomach in the second act. But go to a comedy and can you guarantee a laugh? No more than a politician can guarantee the accuracy of any manifesto factoid.

The premise was simple and, consequently rather worrying. A failed TV actor, no longer wanted to advertise support-hosiery was asked to act as intermediary with a suspected killer who had convinced himself the actor was in fact his old character – a 1970s TV cop called Mindhorn who had an all seeing eye of the Mad-eyed Moody sort which allowed him to know if you were telling the truth.

Mindhorn had to revisit his past, the much dissed setting of the show on the Isle of man, his ex wife, the minor character who’s spinoff had been a huge success, the stunt man he constantly undermined who also had made it big as well as dealing with a sceptical and unhappy police force and a weirdy suspect.

I sank into my seat in a half-full cinema while the initial scene-setting played out. I wasn’t holding my breath, not least because I tend to fart if I do that and, well, farts in the cinema are second only to farts in a lift in terms of social no-nos. It’ll be farce, I thought. Visual gags, I speculated. More Pirandello than Pinter for sure.

But, oddly, I found myself engaged. The pathos, which was an essential component of the humour, was subtly held in check. Why should we feel sorry for Mindhorn when he wasn’t going to feel sorry for himself or give up believing that he still had something and could make it? There’s a fine line between the maudlin mawkish and the magnificent maverick in these sorts of piece and this just about held onto the hope that, just maybe, he could be something, do something.

Yes, catastrophes ensued his every move but he kept going. And in amongst it I did laugh. At visual gags, not clever word plays, sure, but they were genuine laughs.

So how does this rate? Hmm. It’s not Monty Python. It lacks any pretence at sophistication. It’s better than Alan Partridge, not that that’s setting the bar very high, but I think you could say it is in and of the same mould. Or Chevy Chase, maybe if you come from the far shores of the pond.

Go with hope rather than expectation if you’ve nothing particular to do one wet Thursday. Make sure you’ve eaten and you’re bladder-comfy and you’ll probably have a nice enough time.

But if you miss it? Well, don’t worry too much. After all we have an election coming where one or other party will be taking us back to the 70s – admittedly one is harking back to the 1970s while the other it’s the 1870s – so I think we will be sick of all things retro pretty soon anyway. And there’s a  better movie I’ll be reviewing soonish so save you hard-earned for that..

My name is Geoff Le Pard. Once I was a lawyer; now I am a writer. I've published several books: a four book series following Harry Spittle as he grows from hapless student to hapless partner in a London law firm; four others in different genres; a book of poetry; four anthologies of short fiction; and a memoir of my mother. I have several more in the pipeline. I have been blogging regularly since 2014, on topic as diverse as: poetry based on famous poems; memories from my life; my garden; my dog; a whole variety of short fiction; my attempts at baking and food; travel and the consequent disasters; theatre, film and book reviews; and the occasional thought piece. Mostly it is whatever takes my fancy. I avoid politics, mostly, and religion, always. I don't mean to upset anyone but if I do, well, sorry and I suggest you go elsewhere. These are my thoughts and no one else is to blame. If you want to nab anything I post, please acknowledge where it came from.
View all posts by TanGental →
This entry was posted in miscellany and tagged film review, humouir, mindhorn. Bookmark the permalink.