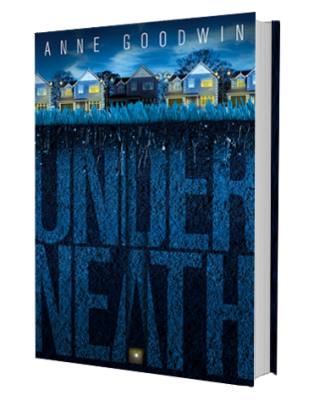 He never intended to be a jailer …

After years of travelling, responsible to no-one but himself, Steve has resolved to settle down. He gets a job, buys a house and persuades Liesel to move in with him.

Life’s perfect, until Liesel delivers her ultimatum: if he won’t agree to start a family, she’ll have to leave. He can’t bear to lose her, but how can he face the prospect of fatherhood when he has no idea what being a father means? If he could somehow make her stay, he wouldn’t have to choose … and it would be a shame not to make use of the cellar.

Will this be the solution to his problems, or the catalyst for his own unravelling?

In my second novel, Underneath, the narrator, Steve, has resolved to settle down in England after twenty years of travelling, keeping himself “in beer and T-shirts” with casual jobs. He hasn’t given much thought to his motivation to travel but, when he tells Liesel, a woman he’s trying to impress, he sparks her curiosity (p12):

“My friend Jules has a theory about people who go travelling,” said Liesel.

Liesel preened herself like she was about to tell a joke. “According to Jules, there are two types of traveller, one lot searching for something, the remainder running away.”

“It’s a pretty slim theory with only two options.”

“So give me another! What made you go roaming the world for two decades?”

I shrugged. “I suppose at first it was for the thrill of coming home.”

It sounded pathetic, but Liesel didn’t seem to mind. “Going away to discover where you’ve come from? I’ll have to tell Jules that one. And who was at home?”

“Just Mum and my two sisters.” Not many thrills there.

As the novel progresses, the reader gets a sense that what Steve might have been searching for is merely a reflection of what he’s running away from: an inner homelessness which only an outward rootlessness can mask. Rather than, as Liesel suggests, he’s gone away to discover where he’s coming from, it’s to forget. His own experiences of returning home have not being particularly thrilling, as he recalls when visiting his mother as she sleeps in her room in a care home (p226):

The emptiness of my reception and the sinking shame of having hoped for more.

I didn’t expect you to hover behind the door with a garland of marigolds, but you could at least have taken pause to acknowledge I was home. It was like you couldn’t bear for me to affect the slightest alteration in your routine. It wasn’t as if my arrival was interrupting anything important. Yet you’d make me wait till the end of your programme before you’d deign to say hello. Wait till you’d finished your phone call before you’d stir yourself to go and put the kettle on.

Mum’s eyes flitted from side to side under wrinkled eyelids as if watching a dream. Her paper-thin lips were unmoving, but I heard her voice as clearly as the ticking of the clock on the wall: What are you making such a fuss about? You expect me to drop everything the minute you turn up? I’ve brought up three children single-handed, aren’t I entitled to some life of my own? What will people think, a great strapping lad like you snivelling for his mummy? Don’t tell me you can’t even make yourself a cup of tea!

Steve’s lifelong sense of estrangement from his own family is set against the warmth he witnesses as a child in the home of his Sikh friend, Jaswinder. Recognising what he’s missing, but lacking the words, a confidante or the maturity to acknowledge his feelings, young Steve projects them onto his friend’s baby sister, twisting her flesh to make her cry.

The contrast between his friend’s household and his own is further exacerbated by a game the boys used to play called Home from India. Reminded of this by the conversation with Liesel mentioned above, and reflecting further when she leaves him to go to the bar for more drinks, he does not feel compassion for his younger self, but shame (p13):

I ran over our conversation in my mind, feeling a bit of a wally about the thrill of coming home. It reminded me of a stupid game Jaswinder and I used to play as kids. We’d knock on the door with our suitcases, as if we were fresh from the plane. We were practically wetting ourselves with excitement, waiting for his granny to let us in.

As a man with an unacknowledged inner loneliness and an idealised picture of how a home ought to be, he’s heading for trouble from the moment he buys a house with a cellar and persuades Liesel to move in. The veneer of perfection crumbles when Liesel announces that, if he won’t agree to start a family, she’ll have to leave. Unable to face the prospect of fatherhood, or of life without the woman that makes his house a home, Steve goes to extreme lengths to maintain the illusion of a secure base. That’s when the room underneath the main part of the house comes into its own.

Like Steve, Anne Goodwin used to like to travel, but now she prefers to stay at home and do her travelling in her head. Like Liesel, she’s worked in mental health services, where her focus, as a clinical psychologist, was on helping people tell their neglected stories to themselves. Now that her short fiction publication count has overtaken her age, her ambition is to write and publish enough novels to match her shoe size. Underneath is her second novel; her first, Sugar and Snails, was shortlisted for the Polari First Book Prize. Anne lives in the East Midlands and is a member of Nottingham Writers’ Studio.

Published internationally 25th May 2017 in e-book and paperback

My name is Geoff Le Pard. Once I was a lawyer; now I am a writer. I've published several books: a four book series following Harry Spittle as he grows from hapless student to hapless partner in a London law firm; four others in different genres; a book of poetry; four anthologies of short fiction; and a memoir of my mother. I have several more in the pipeline. I have been blogging regularly since 2014, on topic as diverse as: poetry based on famous poems; memories from my life; my garden; my dog; a whole variety of short fiction; my attempts at baking and food; travel and the consequent disasters; theatre, film and book reviews; and the occasional thought piece. Mostly it is whatever takes my fancy. I avoid politics, mostly, and religion, always. I don't mean to upset anyone but if I do, well, sorry and I suggest you go elsewhere. These are my thoughts and no one else is to blame. If you want to nab anything I post, please acknowledge where it came from.
View all posts by TanGental →
This entry was posted in Books, guest post, miscellany and tagged @annecdotist, Anne Goodwin, guest post, Underneath. Bookmark the permalink.

13 Responses to Anne Goodwin – guest post – Underneath, her new novel