Charli’s prompt this week is

April 27, 2017 prompt: In 99 words (no more, no less) write a story that includes oil. It can be an oil refinery, the raw product or used as a commodity. How does oil fit into a plot or a genre? Go where the prompt leads.

My dad worked in the oil related industries; he sold oil byproducts like brake fluid and preservatives that the company he worked for sold. For a time he enjoyed the job, jet-setting to Antwerp to get slewed on schnapps and being dined and dining clients. But eventually he hated it, the petty rules and management guff that all big business use as combined analgesics and prophylactics to suppress, contain and anaesthetise staff.

Mind you he did get me the best paid holiday job ever, working on the warehouse where we packed, and filled drums with chemicals before dispatching them. 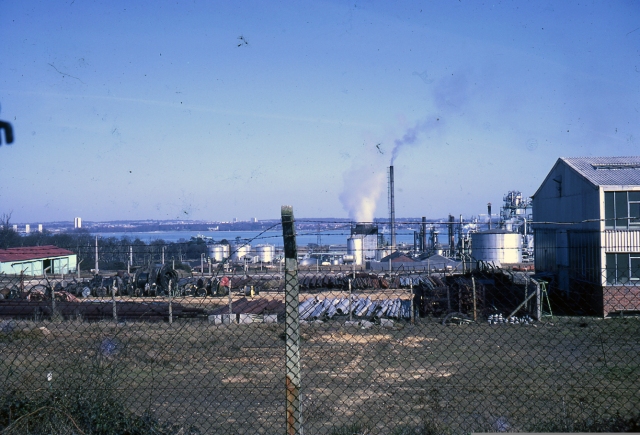 It was eye opening for me, a somewhat naive 20 year old, to work in a unionised workforce that stuck rigidly to a script yet did it’s best to be as subversive as possible. And to work with people who though of dad as a Tory lackey and toff was quite educational too.

I should have driven a forklift truck but while training I lost control and very nearly decapitated the foreman. Alan Meares never really trusted me after that but the rest of the workforce were impressed. Partly by my incompetence and partly by the power my father mus have had to keep me employed.

They sort of got their own back when they gave me a 5 litres can and told me to ‘give it to mum’. I strapped it on the back of my moped as we were clocking off only to be stopped and forced to ditched the box which had held my sandwiches and squeeze it into my backpack. ‘Just drive through security,’ they said and don’t slow down.

‘Pressie for mum. Off you go, sonny.’

I knew it was dodgy but I wanted the money so took it home. I told mum who opeend it, smelt it, rubbed it between her fingers and smiled. ‘Lovely. Say thank you, will you?’

‘My guess is they’ve made fairy liquid concentrate. Your father told me a while ago the plant had the order to make the basic ingredients. They use a nice scent too. Oil of wintergreen I think.’ She stopped and then added. ‘Don’t tell your father.’

I didn’t. Not for a while. Not until after the company had it’s Christmas party. Not until dad came back and asked what John (he was the guy I worked with on the warehouse floor) meant by did dad have soft hands?

Dad was partly horrified – I was planning in becoming a lawyer so knocking off bootleg washing up liquid had  to against some rule, didn’t it; and partly anxious because it gave the ‘boys’ or to use the term by which they called themselves ‘the bollockies’ leverage. If it did then they didn’t use it so far as I know.

As for the washing up liquid. I think mum was still eking it out ten years later….

Mary and Penny have a different perspective this week..

‘Mum, I want to volunteer to help the environment.’

‘What prompted this? Not that I’m against it.’

‘We watched Deep Water Horizon in Geography. The oil industry is awful. We need to have renewables and non-pollutive power.’

‘Are you going to protest?’

Penny picked up her sandwich. ‘What did you protest about?’

‘Stopping Cruise missiles. The miners. You grandpa hated it.’

‘Did it make a difference?’

‘I think I want to do something useful.’

My name is Geoff Le Pard. Once I was a lawyer; now I am a writer. I've published four books - Dead Flies and Sherry Trifle, My Father and Other Liars, Salisbury Square and Buster & Moo. In addition I have published three anthologies of short stories and a memoir of my mother. More will appear soon. I will try and continue to blog regularly at geofflepard.com about whatever takes my fancy. I hope it does yours too. These are my thoughts and no one else is to blame. If you want to nab anything I post, please acknowledge where it came from.
View all posts by TanGental →
This entry was posted in creative writing, flash fiction, miscellany, prompt and tagged Carrot Ranch Congress of Rough Writers, Charli Mill's prompt, flash fiction, oil. Bookmark the permalink.