I love my daddy..

My dad told this story of a Welsh friend, who was also, like me, called Geoff who, when told that Dad and Mum were engaged, asked, ‘So Barbara’s pregnant, is she?’

Geoff pushed out his bottom lip and said, surprise tinging his timbre, ‘Marrying and not pregnant? Now there’s posh.’

I’ve been to Wales countless times and I can think of many adjectives that try and do it justice but posh isn’t one. It just doesn’t have that pretension. It’s green, it’s compact, it’s both pretty and rugged and it can be a bit careworn. But it always welcomes and in my experience has never been at all stuck up. 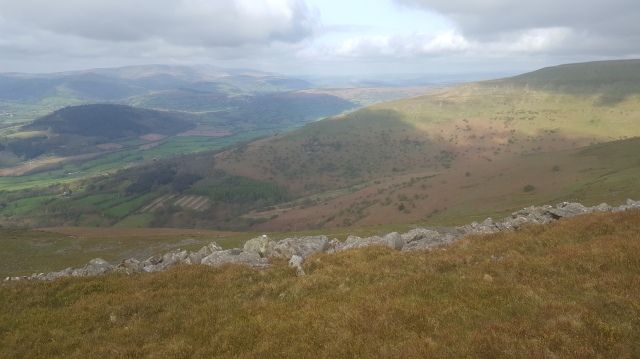 Mind you that ‘welcome in the hillside’ becomes more of a ‘pain in the backside’ when you’ve spent a day in horizontal rain in the Black Mountains. Happily the last few days weren’t one of those days.

If you are fortunate to see this carefully managed landscape with blue in the sky you can understand the concept of a Welsh miracle, well, other than yet another fly-half from their endless factory of talent. Somehow the patchwork of man-created fields that appears to have been draped like a shawl around grainy mountainsides does wonders for one’s mood. You just want to climb. You may want to sing too but neither my companions nor the livestock grazing the fields seemed inclined to let me loose with my rogue chords.

As for Dog, well, he was pretty indifferent. 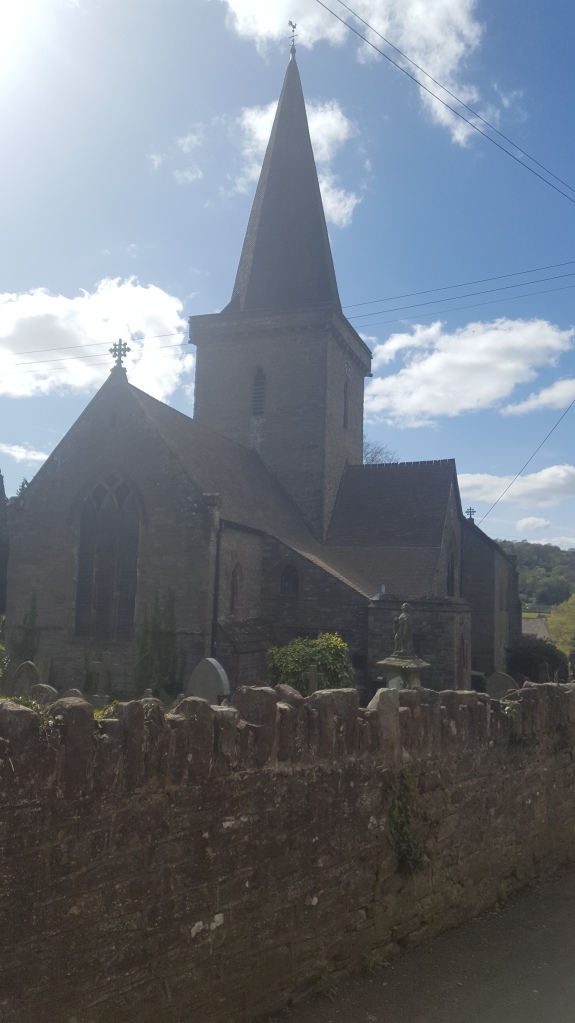 Thus Dog and me and two hail and well met friends rendezvoused in Crickhowell, just inside the Brecon National Park, checked into the Bear Inn, a microcosm of cranky rooms, cramped doors and caring hospitality, and set off on a loop or three.

First we sloughed up, onto and down from Table Mountain, which isn’t but looks like it could be. The views were delightful. Dog was playful even if I had to toss him over a few inaccessible – to him – stiles. And the conversation easy and generous.

At the top there are the remains of an Iron Age hill fort. It’s an intriguing idea, ancient man climbing to these heights where it is rather parky, to build a home protected by the topography. Such effort. I hope it worked. 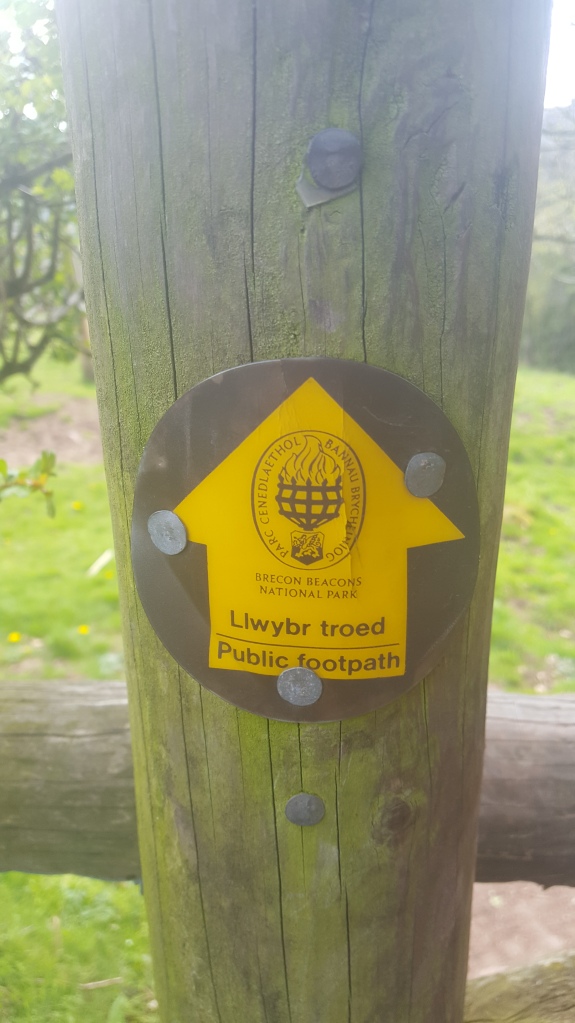 After a decent dinner and a better breakfast we returned to the slopes and climbed a couple of thousand feet through tight picturesque farms, countless nervy sheep and their new offspring 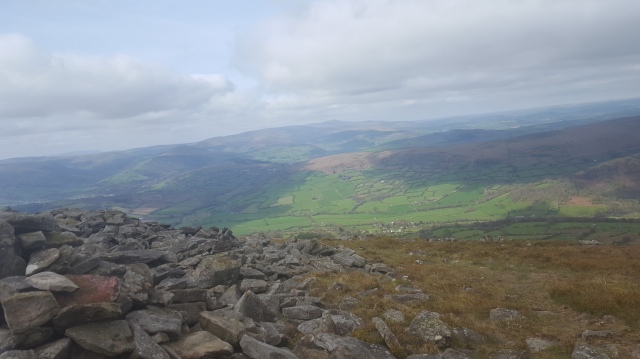 Eventually we crossed a walled boundary and entered the open access areas of the Brecons proper. Climbing still but now in a sharp westerly wind we focused sweat filled eyes on the next cairn. 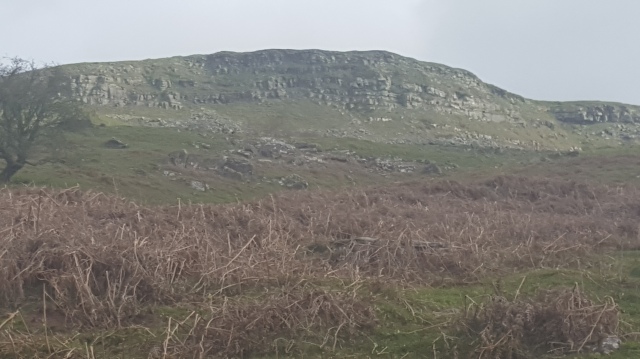 It is worth it. Eventually above a cliff face called ‘Darren’ we skirted the rimmed top, visiting 3 viewpoints and 2 trig points. Pen Gloch y pibwr, Pen Allt-mawr and finally Pen Cerrig-calch a limestone crag with the best views back over Table Mountain and Crickhowell. No idea how they should be pronounced but I bet they sound better than the Shepherd’s Bonce or whatever the English equivalent was.

It was 10 miles and we met many groups of teens from all over, if you took their accents as guides. They were loaded down, in high spirits and challenging themselves with their Duke of Edinburgh’s Gold Award hikes. So good to see.

Down below we lunched sensibly and took our tired feet first along the pattering races of the River Usk and then back via the somnambulant Monmouthshire and Brecon canal. 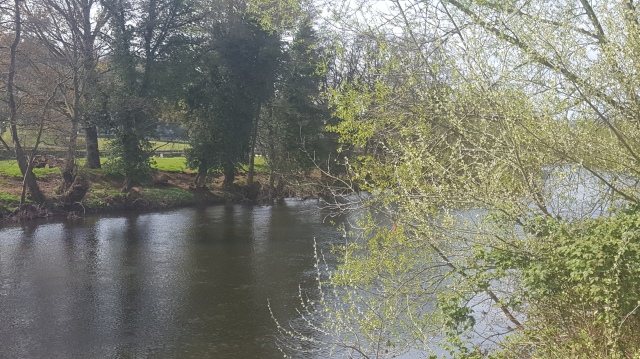 We dawdled to take in the scenery and do a crossword as we walked. Oh pleasures can be simple and great at one and the same time.

For our final full day of walking we set off to the south and up to the Lonely Shepherd who resides in the shadow of the cliffs that skirt the southern crags. 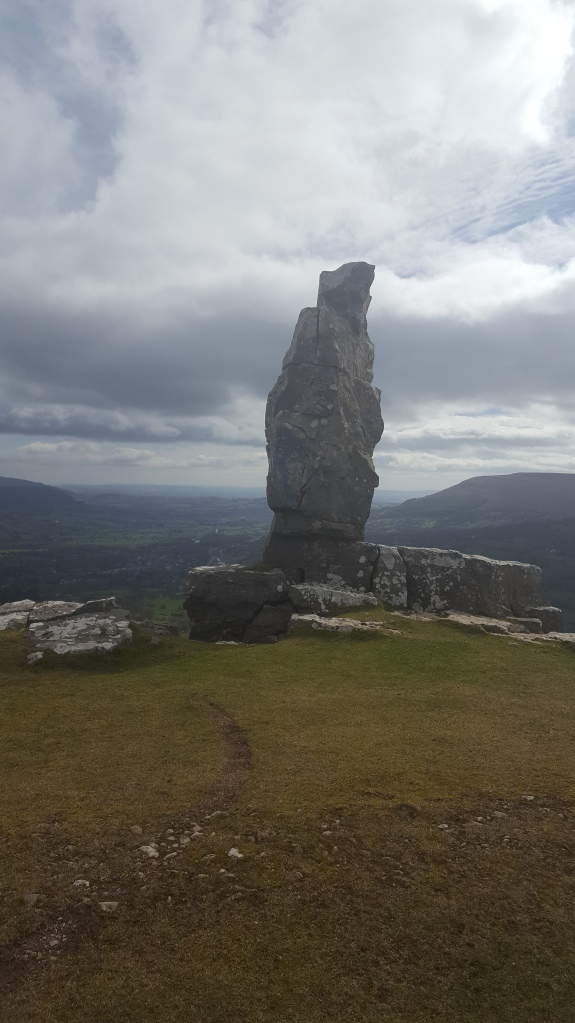 He’s a limestone stack, reputably turned to stone for being unpleasant to his wife.

The route through the now long defunct quarry set the three of us wondering at the efforts to both get equipment up and stone down from the mountain. 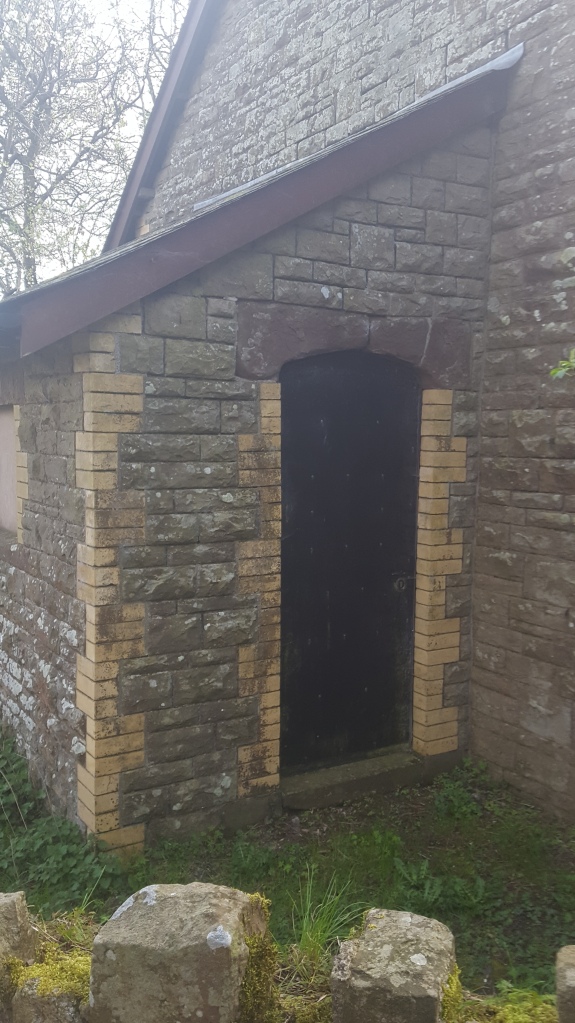 Near the top was a former chapel now shut to humans so it can be used as a bat roost. Splendid up-cycling says I. The lesser British horseshoe bat is apparently from around here and to have a home of his and her own is wonderful. 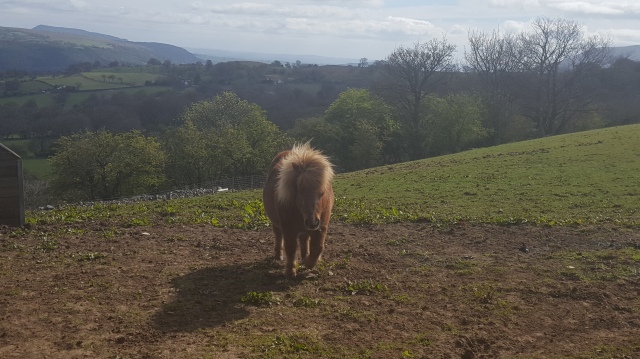 On the way back down we passed an ecologically important hanging bog that site clasped to the side of the hill. 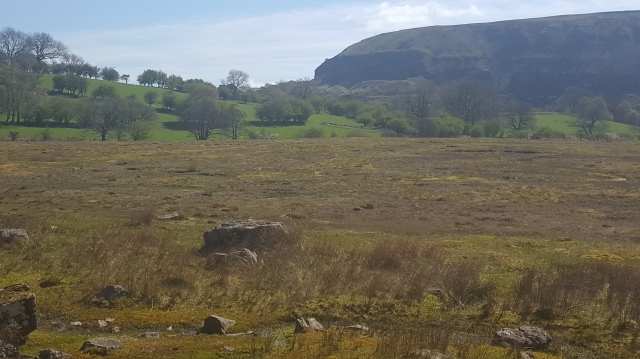 It was serene hereabouts and, as with some much else, devoid of people. While that makes it rather jolly for us, it is a shame more people aren’t out and about.

We sat a while and pondered a clue or two in the the Guardian’s cryptic challenge. The answer was ‘dietitian’ which we eventually unpicked and moved off. It seemed to sharpen our hunger for some lunch. The lads indulged in a couple of Reverend James’ finest pints while I wrapped myself around ham and eggs. 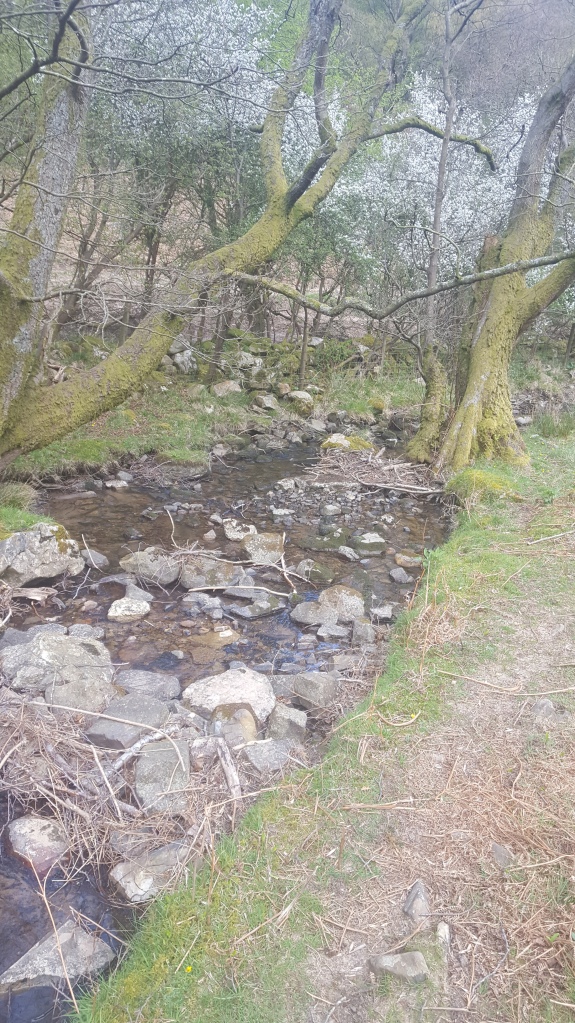 Rejuvenated we set forth once more with clues fermenting in our heads – ‘O is for Officer 6-2-7’ – and decided that we deserved somewhere flat which meant some more of the canal. Which would have been fine had they not been relining a section and redoing the towpath. 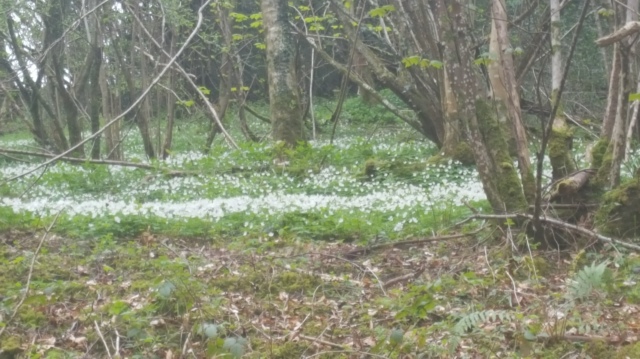 Nil desperandum, we had our OS maps and with some careful management headed for the slope again to circumnavigate a rather boggy, spring infested woodland and a dodgy ford before re-joining the route.

It meant we managed 15 miles on both days (and 7 on the first after our travels). We felt well exercised, well fed and, well, just well. In fact rather like this hiking pig… 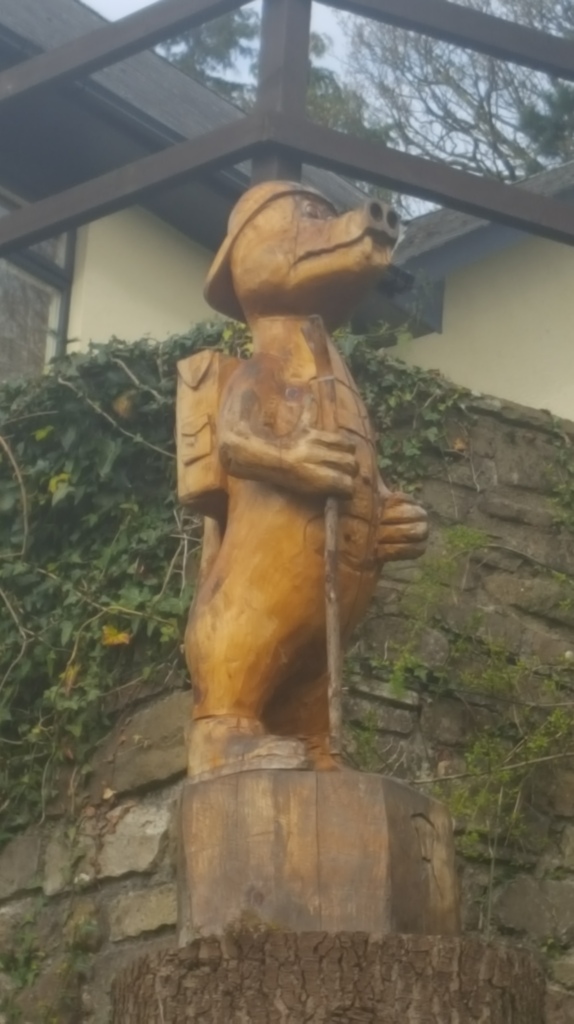 And even a snotty cow who joined our train home at Bristol Parkway and took exception to Dog being on the train couldn’t dampen that. 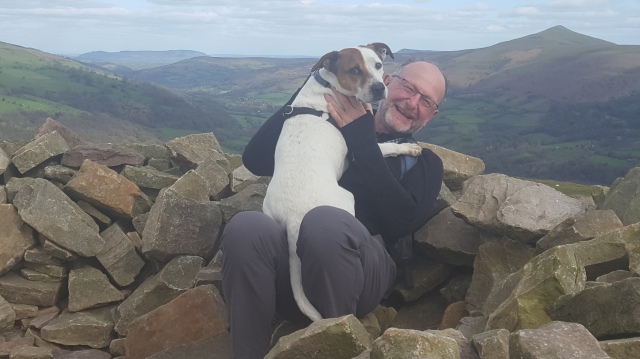 you weren’t looking, were you?

Oh alright, here are some more of Dog… 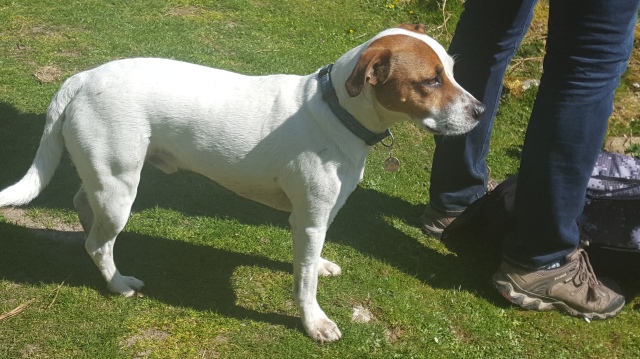 Oh the answer? Second in Command…

My name is Geoff Le Pard. Once I was a lawyer; now I am a writer. I've published several books: a four book series following Harry Spittle as he grows from hapless student to hapless partner in a London law firm; four others in different genres; a book of poetry; four anthologies of short fiction; and a memoir of my mother. I have several more in the pipeline. I have been blogging regularly since 2014, on topic as diverse as: poetry based on famous poems; memories from my life; my garden; my dog; a whole variety of short fiction; my attempts at baking and food; travel and the consequent disasters; theatre, film and book reviews; and the occasional thought piece. Mostly it is whatever takes my fancy. I avoid politics, mostly, and religion, always. I don't mean to upset anyone but if I do, well, sorry and I suggest you go elsewhere. These are my thoughts and no one else is to blame. If you want to nab anything I post, please acknowledge where it came from.
View all posts by TanGental →
This entry was posted in miscellany, Wales, walking and tagged Brecon Beacons, Wales, walking. Bookmark the permalink.