Slipping Down the Slopes #travel #skiing 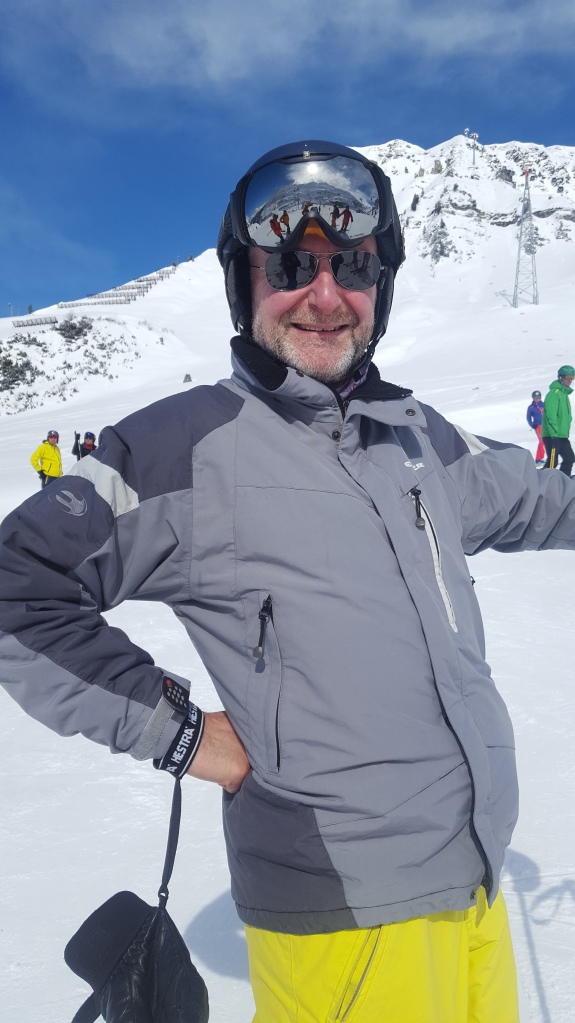 Funny this skiing lark. You travel miles to obscure valleys and mountains that clever engineers have criss-crossed with wires and metal stanchions. You put on clothes in colours normally seen in Farrow and Ball paint charts (pistachio with a hint of catastrophe; puce spume a la recherché) in multiple layers to defy a cold you need but secretly despise.

You force your feet into corrective footwear that even Torquemada might baulk at while lugging thin sheets of two by four up a series of vertiginous cabins precariously suspended above pockmarked scree slopes just so as to put your body through a series of painful and bowel loosening manoeuvres.

You stop when your thighs are humming the Marseillaise to themselves at a bar thrumming with disco circa 1978, sung by a emaciated Albanian with halitosis and the sort of mullet that Rod Stewart still thinks works. You buy coffee that was once a British staple but is now the principle ingredient found in road mending or a beer that makes you realise why no one has yet genetically modified an Austrian and a plate of cheesy comestibles that are the dietary equivalent of a trip to Dignitas.

You use euphemisms like ‘I caught an edge’ or ‘she cut me up’ to excuse your woeful inability to stay upright. Dehydrated you eat five courses of artichoke and wurst soup with glutinous croutons and go to bed early, notionally to be ready ‘to hit the pistes before the crowds’ but really because you can no longer stand. It costs you the price of a terraced house in Basildon and you are well aware it ruins a delicate ecological balance.

But you love it. Don’t you?

There are fourteen of us here. Two couples and the rest having left their other halves behind because, well, they’ve been there, done that and realised a week walking the dog and chitting the early potatoes is more fun.

Some still work at jobs as varied as law and management consultancy, banking and journalism, dentistry and architecture – not that varied, then – while others have retired from full time employ and undertake other missions in life writing silly stories or officiating at humanist funerals.

We talk about Victorian bricks and the Kardashians; Gilbert George Scott and Brexit; the best tarte tatin recipe and cycling up Mount Ventoux. What we don’t do is talk skiing. Technique and snow depth fail to engage us as they once did.

Is that sad? Inevitable? Or a sign that all good holidays just need an excuse to get together but they don’t need that excuse to stay together. 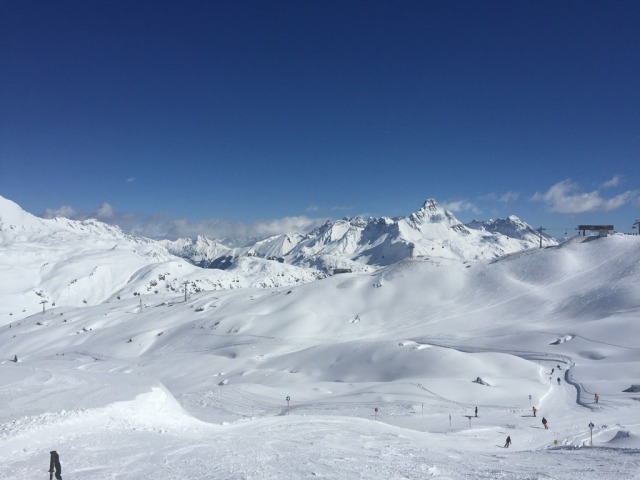 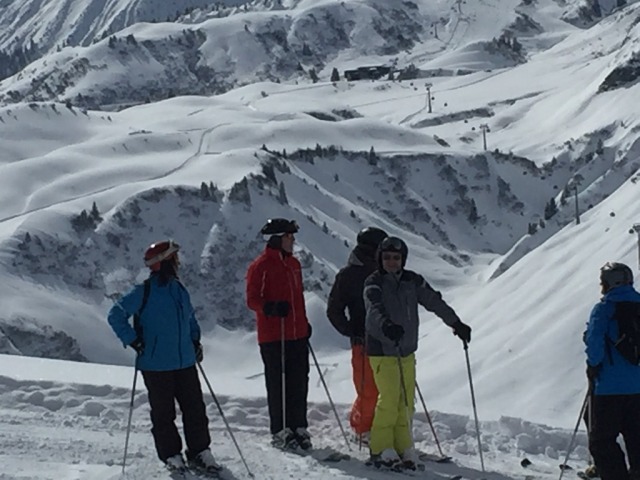 I first skied in 1984 in my late 20s. It was awful. A week being shouted at by an Italian with the girth but not the voice of Pavarotti and the subtle educational skills of Sean Spicer and I never wanted to go back. I went the next year and loved it. Over the years I’ve got faster, braver, more resilient and yet I have retained the ‘lowering himself gingerly onto a cold toilet’ gait that makes every turn an exercise in slingshot body swaying.

These days I know I must prepare my body for the experience. I have to go to the gym and work my legs until you can hear Nessum Dorma echoing from my quads. So why go? Well the scenery is stunning even when it’s not – by that I mean it might be howling like banshee who’s just stubbed its toe and the visibility might be better inside my small intestine but it is magical to experience sooooo much snow when my part of the UK gets less than Darfur.

There’s some really rather engaging company, too. And there is the challenge. When my parents mixed their DNA 60 years ago the little guy who decided I got dad’s ears and mum’s nose made the fatal decision to give me dad’s ego with a twist of my maternal grandmother’s. The result is a continuing belief that I can do this thing even when the evidence presents itself differently. 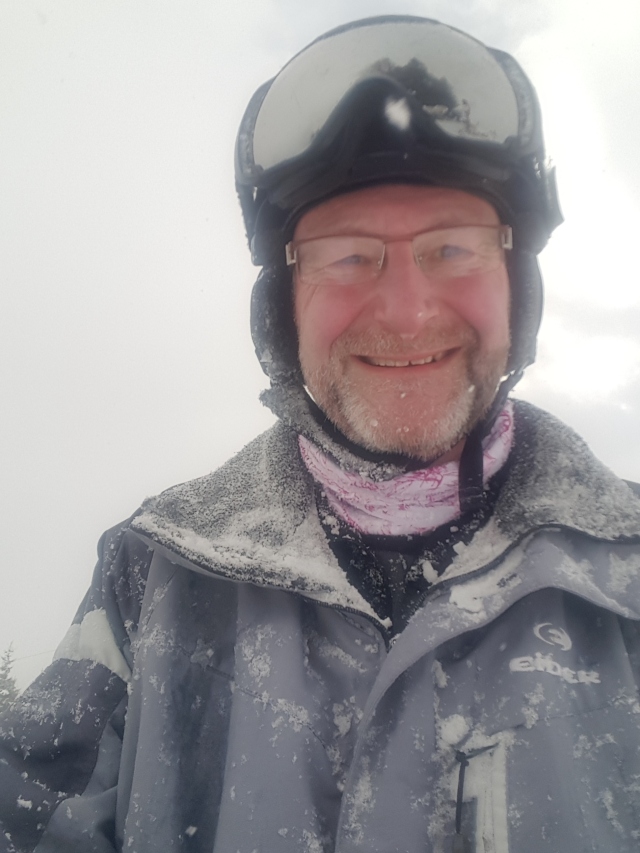 Today it snowed hard. The white sky joined the white slopes in the topographical equivalent of invisible mending. But, see, I was prepared. I had state of the art goggles, that enhanced and yellowed my vision – the fact it looks like the snow Frank Zappa warned against is something I have managed to suppress.

Sadly the goggles still fog up when I exert myself. So here’s the thing. Stay upright and see okay. Fall over, lose my skis, crawl back up the slope to retrieve them; and put them on and realise the bindings haven’t been reset; reset the bindings and try again; realise the snow is impacted on the  bottom of my boots; beat my boots with the pole and try again; repeat on the second ski; realise I have let go of my second pole when using the first as a hammer; hunt for same and fall over; repeat. By the time I’m ready to ski again the inside of my goggles resembles London circa 1952 at the height of the smogs. Or as one colleague put it far more eloquently than me ‘my cockpit is full of smoke’. 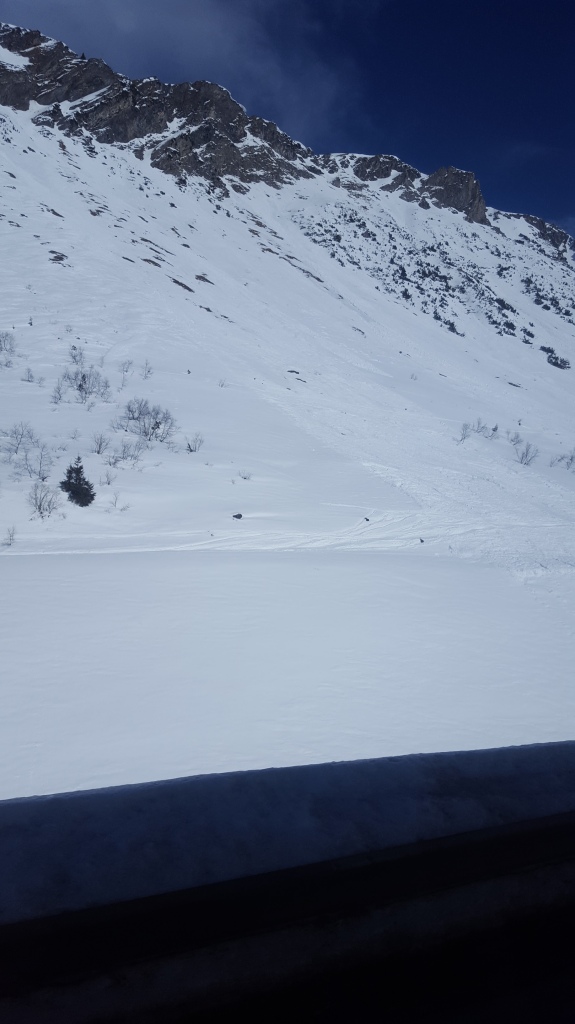 It’s thrilling this ‘feel the snow’ baloney that’s peddled by ski instructors the world over, up there with ‘bend your knees’ and ‘weight down the slope’. I mean they’re not wrong, of course they aren’t but if at the particular moment you are viewing life not so much as transient as historic, glib cliches are about as useful as a chocolate teapot.

A friend told me at breakfast that I need to ‘attack the slope’. I checked he didn’t mean beat it senseless with a ski pole in frustration.

‘Believe it’s yours, you are the King of this Mountain.’

It’s all about confidence, being prepared sartorially, physically and mentally. So today we structured a plan. We took time putting on the right layers for the microclimate; we made sure the boots were properly secured, the clips gripping with just the right mix of pert ferocity needed to ensure feet, ankles and legs were ready to go when the brain told them to; we cleaned the soles of our boots of impacted snow so the bindings held as intended by the manufacturers.

We stretched and we massaged; we breathed with the calm mindfulness of an experienced yogi; and we squeezed and gripped our hands so the blood flowed effortlessly. Above all we focused on that first slope, that first turn; we drew on our collected years of skiing to implant a picture of the right posture, the correct mix of calm and tension in all the many muscles we were about to call into aid. We were mindful, peaceful and ready.

What we mere mortals forget in these moments is Flake, god of skiers, a contrarian curmudgeon who delights in the unforeseen. As I pushed off, awash with Joy and Endorphins I missed the flash of blue to my right. By the time my beauteous trance-like state had been interrupted by Bonkers Bazza from Bollocks-on-Avon, he had crossed the back of my skis pinning them to the piste as I continued the forward motion.

As advised, I attacked the slope with gusto. 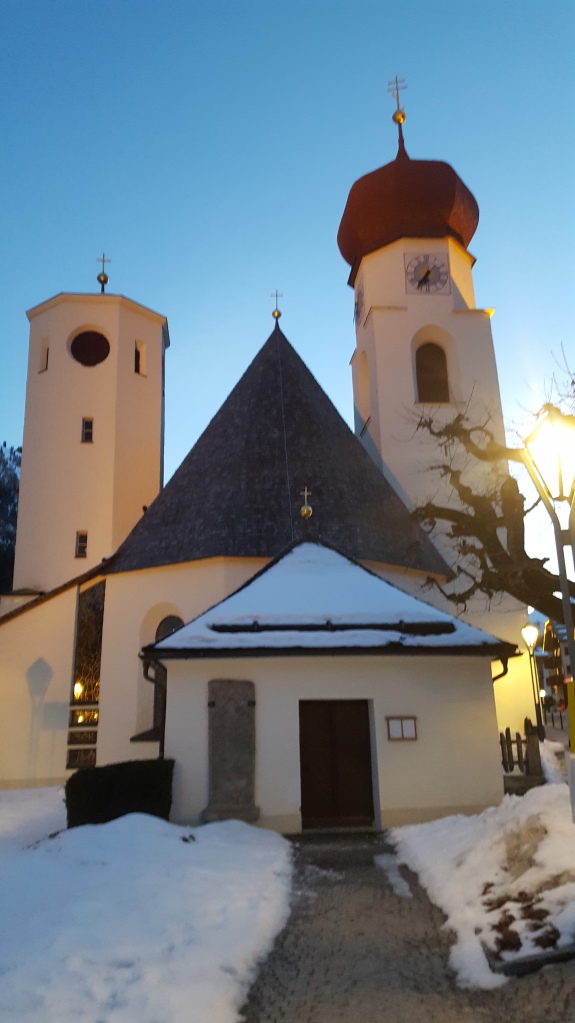 Lunch on the mountain is one of the great occasions. Each European country has its own speciality, be it raclette or rosti, schnitzel or strudel. I don’t drink alcohol like the others but the thinner air, the generous company and the delight in another morning survived are intoxicating enough to bring a perma-grin to the face. 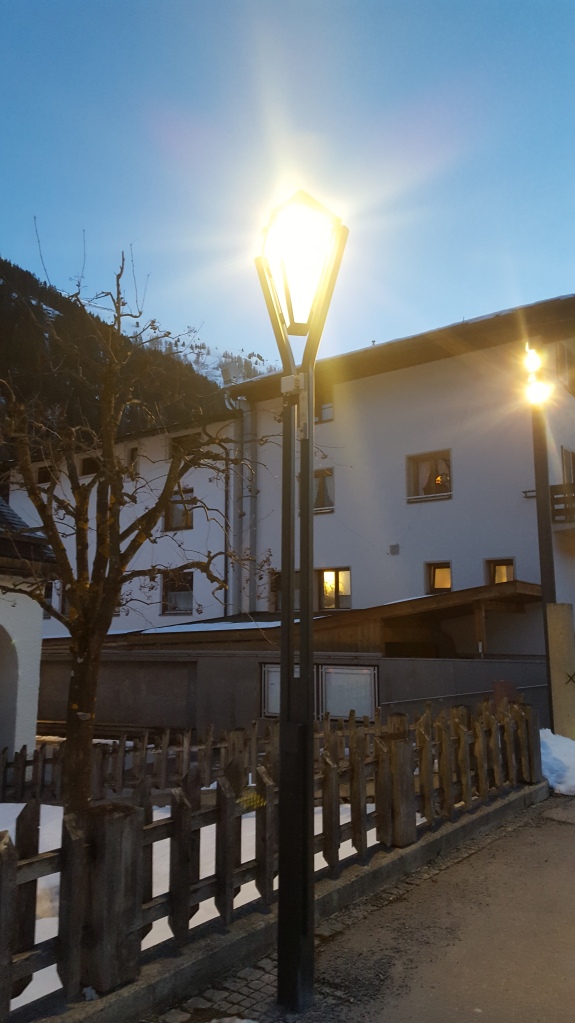 On good days, like today, as the sun shines, the crisp air turns sweat to steam and gives the outdoor seating a volcanic ambience there isn’t anywhere else to be. Those who work, forget the desk or the screen; those whose families are a struggle put the agonies away. Conversation is light, gay in a 1920s way, funny and moving. Laughs become a tsunami of giggles around the table. All is right with the world.

And then you go to the toilet, slip on the icy stairs and break your arse into four even pieces. Flake never gives up. 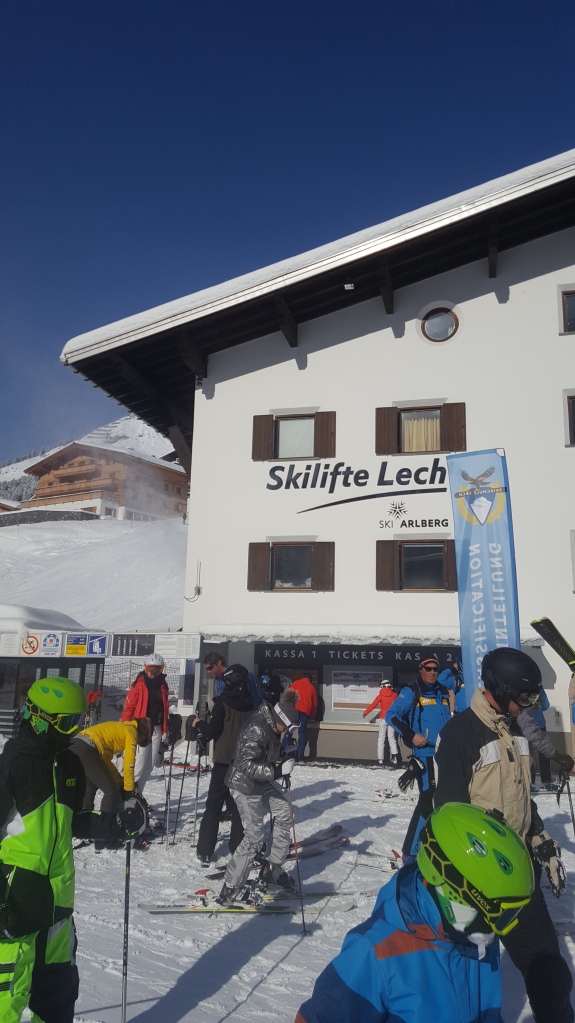 If it rains you can’t do anything but sit and talk. These days talks are interspersed with clips of music or YouTube snippets. The usually avoided subjects of Brexit, Trump, the monarchy and religion are the subject of gentle banter rather than pithy and prickly debate. Families are boasted about. Holidays past and to come vicariously enjoyed. Anecdotes shared, for the tenth time yet treated with fresh hilarity. It’s the reason we come, after all and the enforced day off allows the conversations to develop in the oddest of ways. Someone talks of the Necropolis railway, another the short history of bananas in Iceland. We learn about Mormon family trees and how to remove dead wood at work. It’s all rather splendid. And the best thing? When it works, people leave their phones on the table and talk, unless their use enhances the conversation. Yep, old school but all the better for that.

And so it ends. There’s a small death at the end of a good holiday, especially when the group dynamic functions without any creative or other tension. We have awards, a singularly childish yet much loved institution which last night threw up the usual surprises. Mine? Best skier? I think not. Most confident user of a piste map? Let me digress and ask what topographically illiterate wrote the first piste map and then persuaded the style to be adopted world wide? These are the cartographical equivalents of madness personified – writing the same thing time and again and expecting them to be useful. So no, I didn’t win that. I was gifted Anecdotist of the Tour, which I liked, plus an honourable mention for providing a homely reminder of what it was like to ski with young children as my fellow skiers enjoyed my seemingly endless runny nose. As James, our cheerful if eviscerating host put it, the fact I seemed to be as oblivious as the children once were made it all the more poignant. He once worked for PWC so I felt this award had to have been intended for another but, endlessly polite I accepted the wrong gong and my trophy – a classy shot glass inscribed with ‘stanton’ – with good grace. We will get him back and he knows it.

So I am strapped into a British Airways metal cigar, pulling away from the quaint Frederickshafen airport and skirting the snow covered Alps to the south. It’s been grand. A pleasure. Even if it means spending the next hour and a bit with the unwashed pensioner to my right. Probably an advocate of the Queen Bess philosophy on bathing: ‘I bath once a week, even if I don’t need to’.

My name is Geoff Le Pard. Once I was a lawyer; now I am a writer. I've published four books - Dead Flies and Sherry Trifle, My Father and Other Liars, Salisbury Square and Buster & Moo. In addition I have published three anthologies of short stories and a memoir of my mother. More will appear soon. I will try and continue to blog regularly at geofflepard.com about whatever takes my fancy. I hope it does yours too. These are my thoughts and no one else is to blame. If you want to nab anything I post, please acknowledge where it came from.
View all posts by TanGental →
This entry was posted in Friends, holidays, humour, travel and tagged Austria, holidays, skiing, st anton. Bookmark the permalink.

31 Responses to Slipping Down the Slopes #travel #skiing