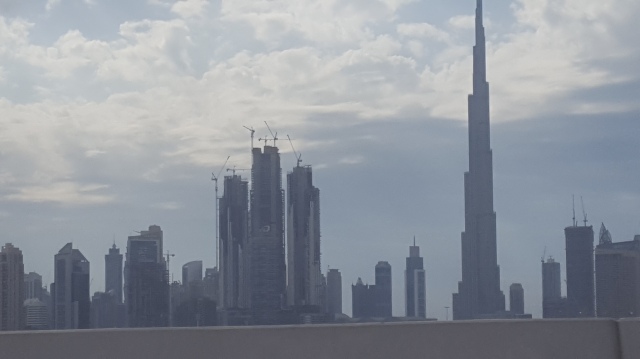 Ok so three days in Dubai is no way to judge a place. But you do gather impressions.

This is a place that’s uninhibited in its excess and only limited by its overall size, the need to import everything, few natural resources, an Islamic code that is bent in many ways but still holds I think because of the proximity of a Saudia Big Brother and unstable entities like the Yemen nearby. As someone put it, in England if someone spent £1 billion on a building, it would be ‘how much’ coupled with muttering of value for money; here there would be a note of pride in their voices. That’s the philosophy. Arrogance or an abhorrence of false modesty? That’s for everyone to make up their own made but I’ve yet to visit a country that doesn’t big itself up in some way so… 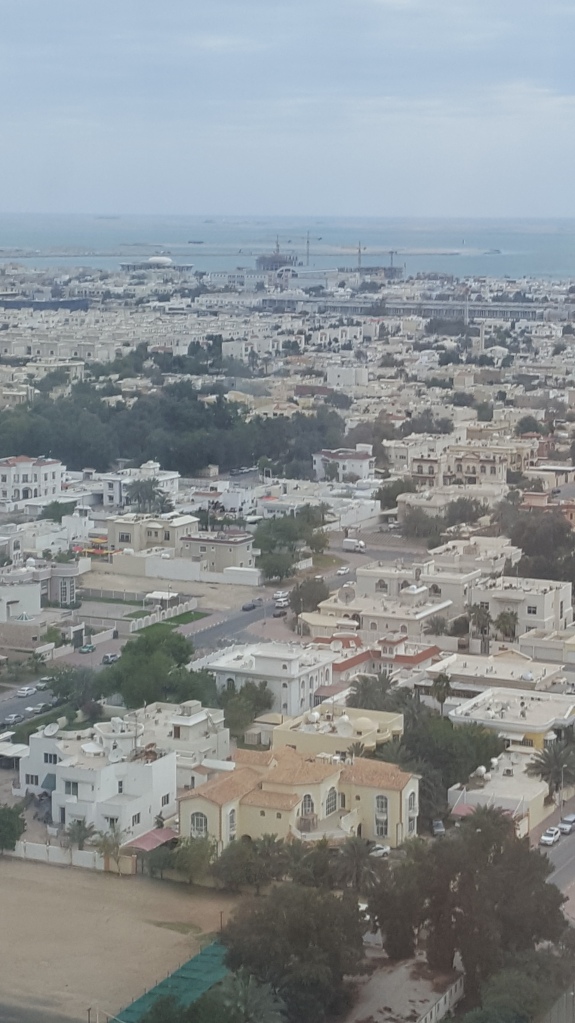 They show off. They like showing off. They can show off. But that doesn’t make them bad or even wrong. Let’s face it every nation that can, does. And these guys don’t do it by trying to take over the world. They’re a bit like the weedy kid at the back of the class who waves his hand – look at me, look at me – and then gets the coolest jeans because he can and suddenly he’s befriended.

Despite my reservations – and I don’t really get excess in any form except when watching days and days of cricket – I had a sneaking regard for here. You may well not agree with the conspicuous consumption, the flagrant way power is burnt off, the fossil fuels expended; you may have severe reservations about the nature of the treatment of women and minorities all of which I understand and echo. But these are a people making a place for themselves. In Britain we spent decades building fuck you stately homes and civic marvels to show off and did our best to turn the world red because we thought we were doing everyone a favour (really? It was that noble? Nothing to do with controlling the resources and markets we needed to be Creosus wealthy?) It took us far too long to see it for what it was. Should we really be surprised at how some others do the same when they get the chance?

So ok, it’s fair to point out the failings but I will give a bit of credit for the attempts to drag themselves forward.

‘So what are we doing today?’

‘After you ate all that cheesecake, dad? The gym.’

He meant it too, the tyrant. But after, we had a trip to the red desert, to view the rolling dunes and dress for the gusting wind that blew up eddies of sharp edged sand to exfoliate anyone in seconds. 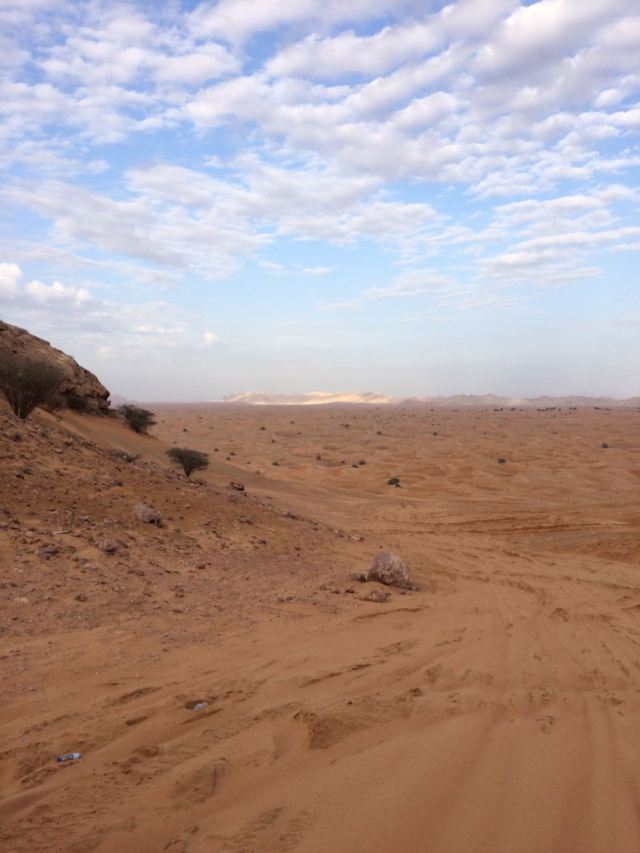 The only thing about the Lawyer, though, is he doesn’t like easy. Oh no. If we were going to see the desert, it was like this.

Quad biking, dressed like a failed extra from some male perfume advert. ‘Don’t break the machine,’ said the smiley mechanic, ‘or you pay.’ 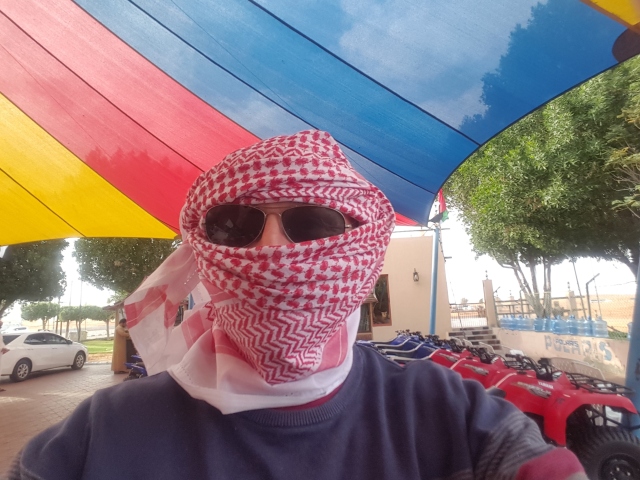 I thought that harsh. I mean don’t they know me? Aren’t they aware they will give me a dud, even if it is in all innocence? Wasn’t I the father who accompanying the Vet on a horse ride in St Lucia was given a horse called Macho even though I’d insisted I was a total novice? The beast lived up to his name. What’s that line from the Elbow song ‘only good for glue?’

Quad biking for the uninitiated is an exercise in cojones. Balls. Especially in sand. Going straight, even up and down is not tricky but try cornering, in particular on a slope and the slower you go, the more careful and considered you are, the more you end up heading in entirely the wrong direction – usuallly downhill and sideways. My buttocks cramped, my tennis elbow returned like a del Porto forehand and I’ve seen less white knuckles on an albino polar bear. But I did learn and it did work.

I told everyone I had a great time. That’s me at the back, simply buzzing amongst the Lawyer, the Beautician and their friends. I did.

The scenery was just what I hoped it would be – sitting and staring towards the mountains, I think in Oman, you could see why it was easy to get lost, disorientated.

I just wish I was a natural at these sorts of things like the younger generations seem to be.

We ate well; we were hungry. The setting, by the sea, was in the main, I think, a residential area. It was bloody parky and the restaurant staff gave us blankets and that was okay. After all it’s good to be surprised.

My final day was always going to involve the museum of Dubai. The Lawyer will back to the legal grind, the Beautician sorting out some last minute things before she flies back with me tomorrow and anyway they have been there. What, one wonders, does Dubai make of its history? Have they sanitised it or embraced it…? I’ll let you know.

I will finish with an anecdote-as-metaphor. In my first post from here I mentioned we played some golf. I am not a golfer. I’ve watched masses, I can explain grips and stances and playing a sand wedge. I even know what a nibblick is. I’ve paid homage to Tom Morris. But of the game itself I have avoided it. Too addictive for one such as me. I’ve hacked around courses maybe 20 times in my (cough) few years on the planet.

This was a 9 hole par three course for rank amateurs. It was beautifully maintained (best not to ask where they find the water) and we agreed if we took more than 6 shots at each hole we’d call it six. As we approached the 5th my card read: 6,6,6,6. Devilish, eh?

The 5th is the one hole where your first shot has to clear the water. Since 3 of 4 tee shots had left my choice of club like low flying howitzers – frankly I was pleased to connect at all – I wasn’t confident. The Lawyer, already 2 or more shots to the good indulged in some cheery banter as he sent his tee shot high curving to the left of the green.

There was an element of ‘beat that old man’ in his strut back to the bag of clubs. I addressed the ball, whispering a small and, in all honesty, a bit too late prayer to just clear the water, and let rip.

As per usual the ball shot away like a .303 bullet but it was immediately apparent it was dipping towards the still calm of the small lake.

Ah well I thought I suppose…

Fate, faith, some capricious god, the echo of Barnes Wallace, I know not but the ball clipped the water and skipped. One bounce and it rattled into the far bank and spooned high in the air.

Now devoid of velocity the parabola described was one of astonishment for ball, the Lawyer and me. It landed with a soft ‘pfft’ and rolled in a stately but determined way into the hole. A hole in one. Watched with eminent restraint by the Lawyer, before he hugged me, picked me high in the air and echoed his grandfather on the many occassions when I have avoid scrapes ‘you lucky so and so’. 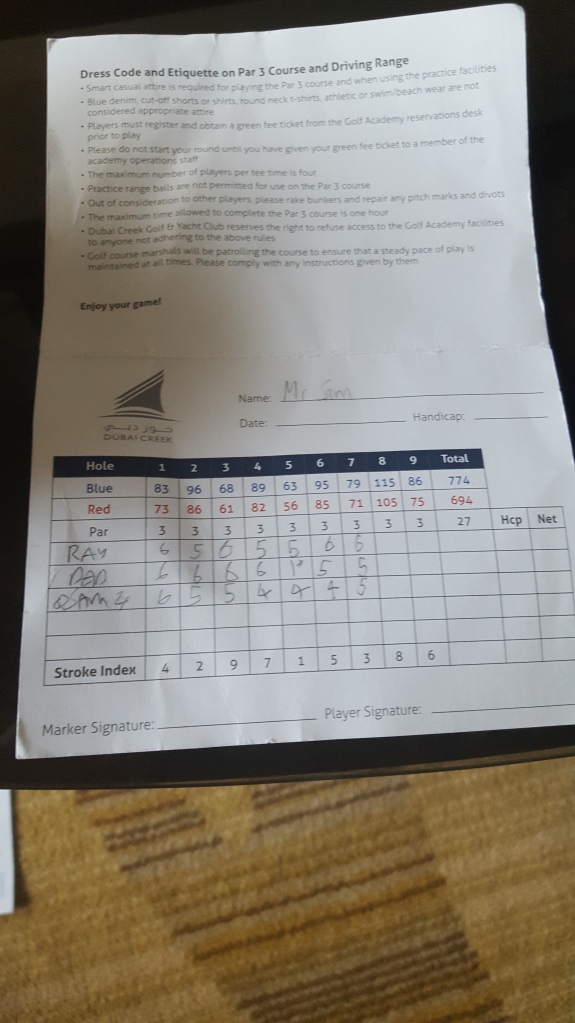 And the metaphor. Have a go. Things often work out in odd ways. Try and you might be surprised to find the occasional gems amongst the dross. Like here, maybe.

My name is Geoff Le Pard. Once I was a lawyer; now I am a writer. I've published several books: a four book series following Harry Spittle as he grows from hapless student to hapless partner in a London law firm; four others in different genres; a book of poetry; four anthologies of short fiction; and a memoir of my mother. I have several more in the pipeline. I have been blogging regularly since 2014, on topic as diverse as: poetry based on famous poems; memories from my life; my garden; my dog; a whole variety of short fiction; my attempts at baking and food; travel and the consequent disasters; theatre, film and book reviews; and the occasional thought piece. Mostly it is whatever takes my fancy. I avoid politics, mostly, and religion, always. I don't mean to upset anyone but if I do, well, sorry and I suggest you go elsewhere. These are my thoughts and no one else is to blame. If you want to nab anything I post, please acknowledge where it came from.
View all posts by TanGental →
This entry was posted in miscellany, travel and tagged desert, dubai, food, museum, quad bikes, thoughts, travel. Bookmark the permalink.