But, hey, I said I was going to be open-minded, see behind the excesses. The largest this and the costliest that and the grossest the other. I just didn’t think I do so from inside a parka.

The Museum of Dubai maybe? The Old Port?

‘What about 9 holes of golf and you can see the Marina.’

Marina. The mermaid in Stingray.

Ah innocent days when having strings attached was a good thing.

We did golf, grinding out a score and the sand from our eyes. 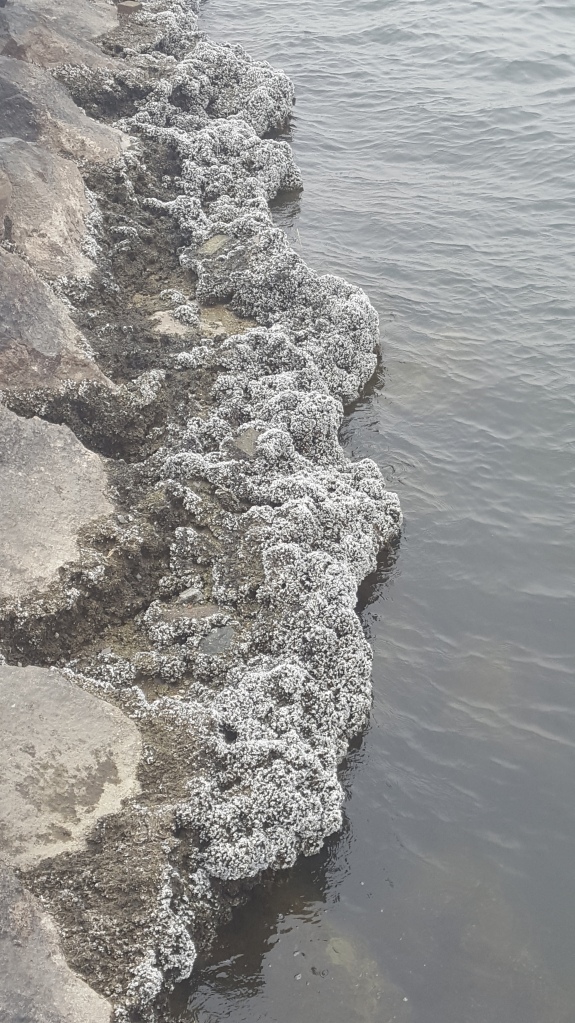 We looked at the golf club, built like a three masted dhow

I quite liked it in a Sydney Opera House meets a Jamboree kind of way – took in the yachts and floating gin palaces, mused on whether the silvery looking coral was real or fake and had lunch.

It’s expensive here, more than I imagined but if you shave gold on your cappuccino rather than chocolate I guess that’s inevitable.

We went camel racing. Not us. Not any humans in fact. 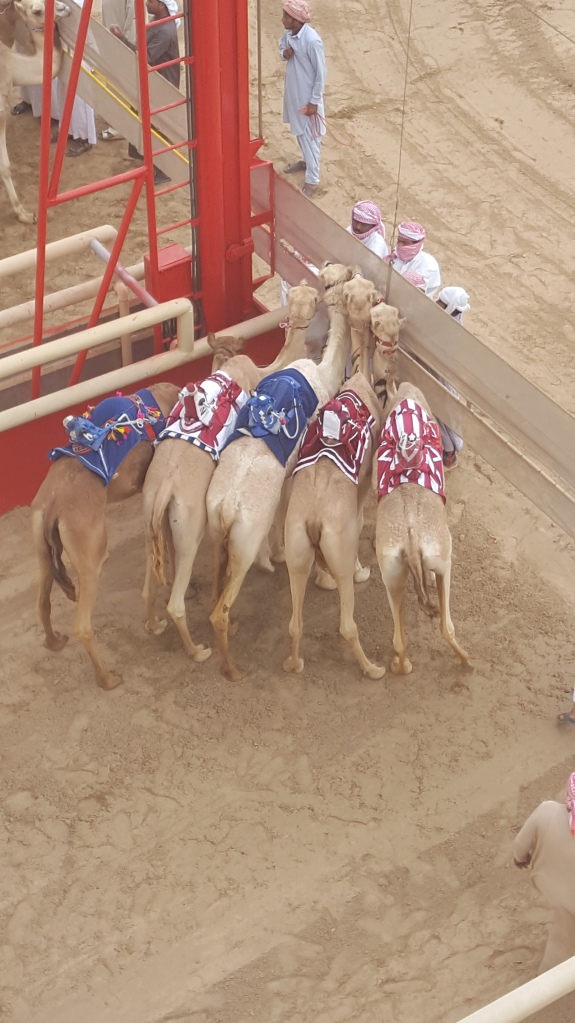 Seems they used to use children who got horribly injured so now it’s cambots on their backs. Camels are wonderful animals, the epitome of the nobbly  bit. Their knees are like root vegetables and with lips like those 50 Shades truly would have gotten darker.

I digress. The camel race, a few miles out of town was sparsely attended and oddly amateurish. 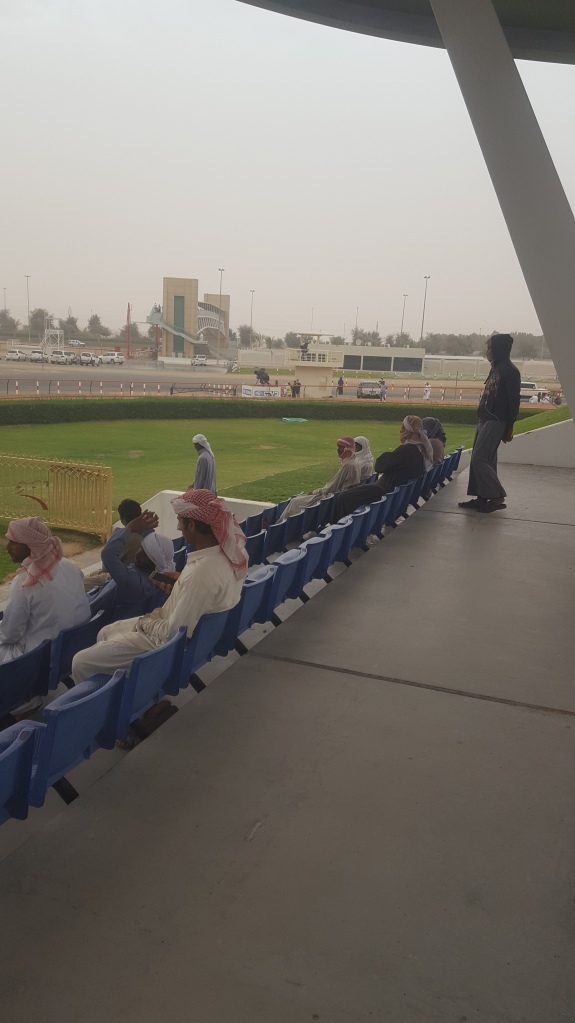 Maybe it was the lack of (obvious) betting, maybe the weather which felt more like Easter in Morecombe. Anyway we watch the start, with a dozen camels followed by a phalanx of SUVs, from which a hubbub emerged – very much a Muezzin with a migraine – urge the beasts on.

They lollop 8 km, disappearing into the mist and reappearing 10 minutes later amongst the cars which now resemble the vanguard of revolutionaries just told their dictator has left the building; the only difference being the lack of Kalashnikovs peppering the firmament.

We chose to cheer the one in Crystal Palace colours (I suppose they may have been Barcelona too) who came second. And that seemed to be that.

We needed a beverage and I’d had my bit of local so I was expected to  enjoy the Dubai Mall, self declared biggest in the world. 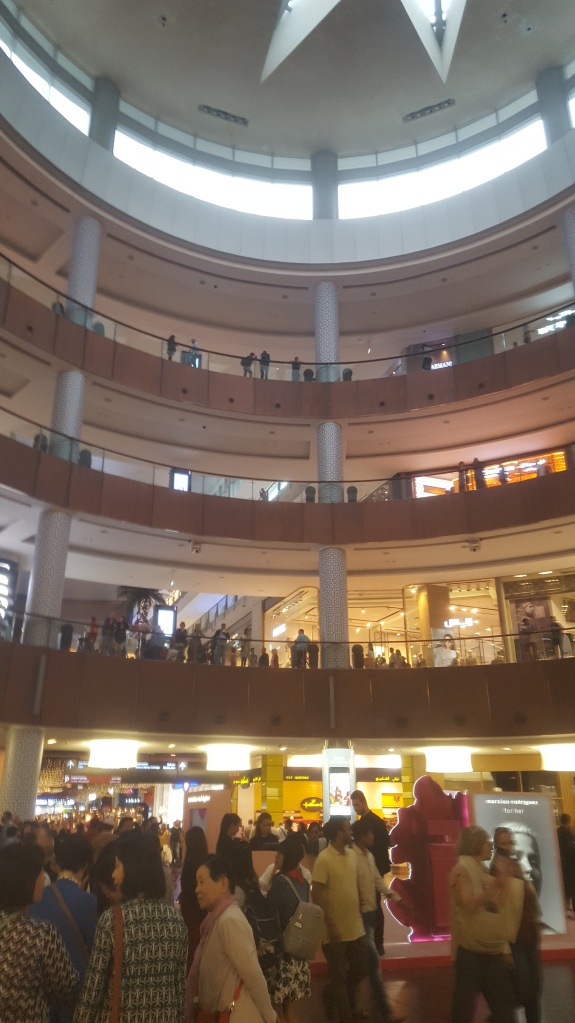 Some of the decor was neat.

As was the aquarium in the middle… 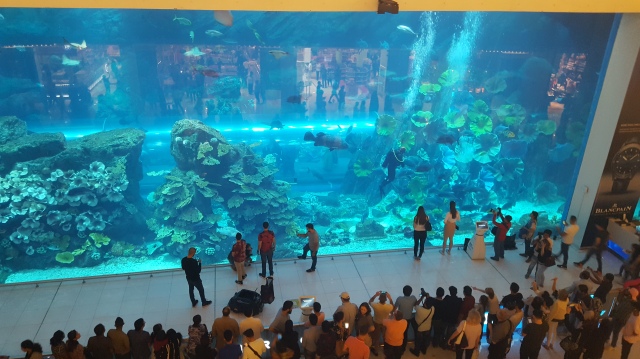 There was this cheesecake emporium with over 30 different cheesecakes.

At least I grabbed a coffee while others imbibed something more methylated. 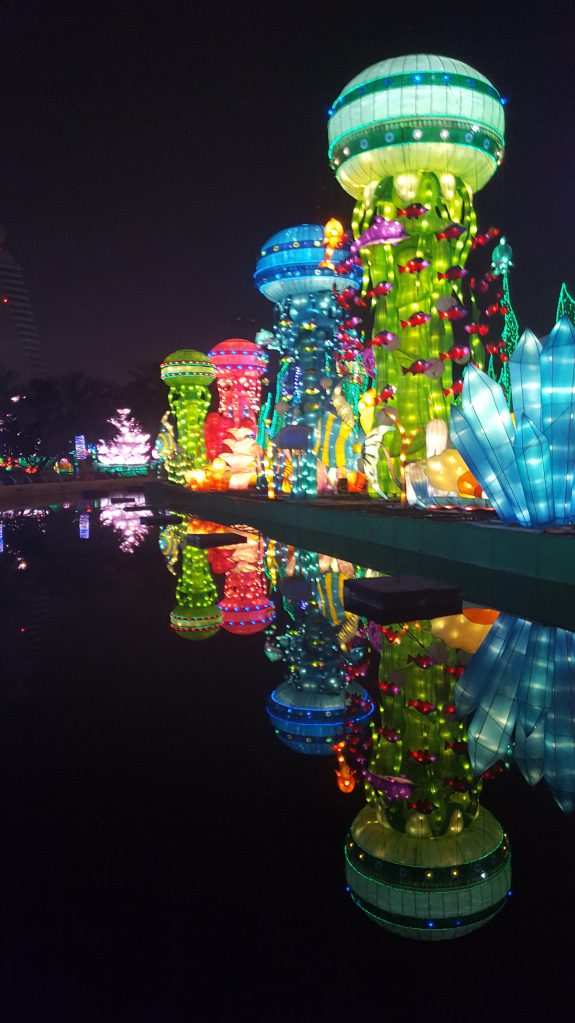 Apparently I could but for my good behaviour we were taken to the Dubai Glow Garden and Dino Park.  I thought ‘great legoland’ but you know my snob gene sometimes has to give best to a smile spectacle. If you ignore the ridiculous excess of energy use that is. 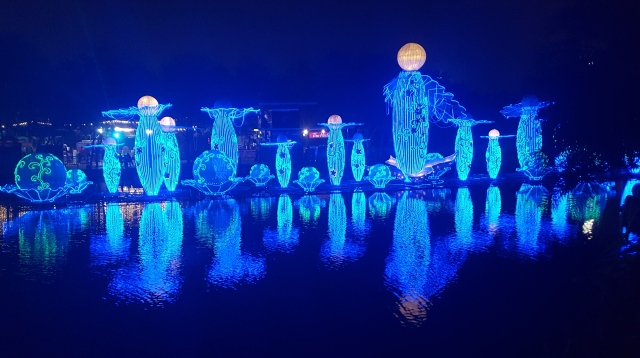 There was some beguilingly innocent about it and if the animatronic dinosaurs wouldn’t scare a neurotic pumpkin I would be the first to admit I’m hardly the demographic they are aimed at. 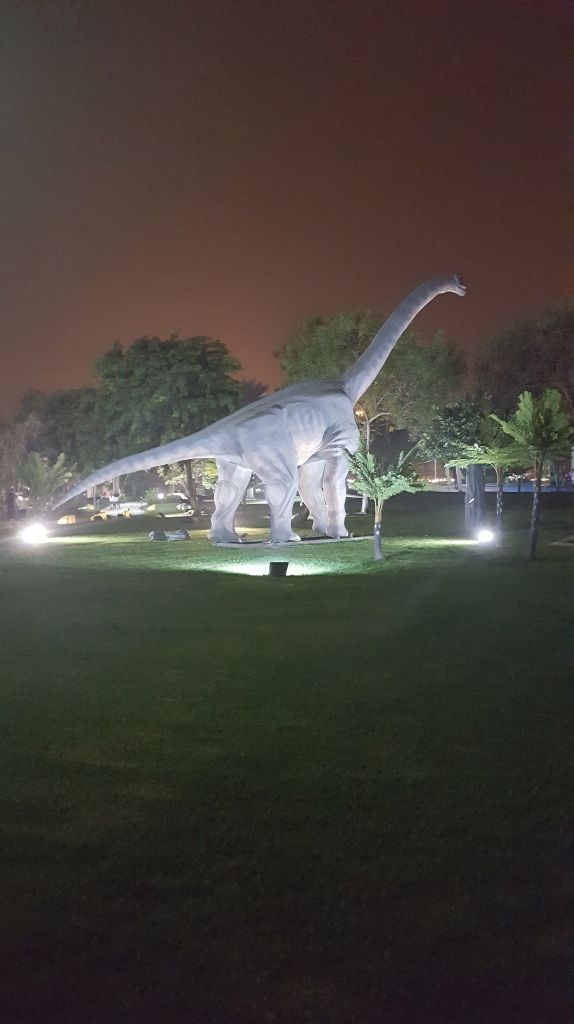 Unlike the Burg Khalifa the tallest yadayadayada… and its light show.

That was stunning but rather soulless. Somehow the reflective lights of the Glow Garden were that but more human. But the fountain displays, coordinated with local music, like aquatic belly dancing had me smiling.

This was a long day, starting at it did with a 7.30 wake up call (my body was screaming ‘go away it’s only 3.30) and my feelings so far? Sensory overload, a tinge of sadness that something traditional like camel racing doesn’t generate a following unlike the Mall and a small hope that if Dubai do things on a slightly smaller scale they may get them right.

And I did enjoy the key lime cheesecake

My name is Geoff Le Pard. Once I was a lawyer; now I am a writer. I've published four books - Dead Flies and Sherry Trifle, My Father and Other Liars, Salisbury Square and Buster & Moo. In addition I have published three anthologies of short stories and a memoir of my mother. More will appear soon. I will try and continue to blog regularly at geofflepard.com about whatever takes my fancy. I hope it does yours too. These are my thoughts and no one else is to blame. If you want to nab anything I post, please acknowledge where it came from.
View all posts by TanGental →
This entry was posted in miscellany, travel and tagged burg khalifa, camel racing, cheesecake, dubai, Dubai mall, golf, marina, stingray. Bookmark the permalink.