A Time In Africa – part one #memoirs #africa #Safari

In 1988, I had turned 30, been married 4 years and been a partner in my law firm 12 months. The Textiliste and I had undertaken a rather crazy project of refurbishing a house in Herne Hill, South London which, when we moved in, in January 1985, was an utter heap. By mid 1988 therefore we needed a holiday that didn’t involved plaster dust and Nitro Mors (which has to be singularly the most unpleasant substance I’ve yet to bring into contact with my skin, with the possible exception of shaking Tony Blair’s hand).

How do you choose your holidays? Is it by setting out criteria – sunshine, food, culture, must speak a language that doesn’t involve clicks, somewhere that doesn’t have more than 15 deadly poisonous mammals? We are influenced by what we see and, especially, read. For instance our on going love affair with all things Scottish and especially the Highlands and Islands comes directly from watching the film Local Hero.. cue music…

Sorry, very self indulgent, but Mark Knopfler is brilliant…

About this time, we had seen a TV adaptation of Elspeth Huxley’s autobiography, ‘The Flames Trees of Thika’ a beautifully written story of her childhood in Kenya, up there with Karen Blixen’s Out of Africa which came out in 1985 as film with Redford and Streep.

Reading both books told us exactly where we needed to go. East Africa and specifically Kenya and Tanzania.

I managed to blag my way to three weeks holiday, as did the Textiliste – I’m not sure either of us really know how – and in late September 1988 we boarded a British Airways flight to Dar Es Salaam, via Nairobi.

As it happened the Aga Khan’s family was travelling in the front bit and there was the most enormous kerfuffle when they got off in Kenya. Lots of flunkies bowing and scrapping; enough to make you Republican, I always think. 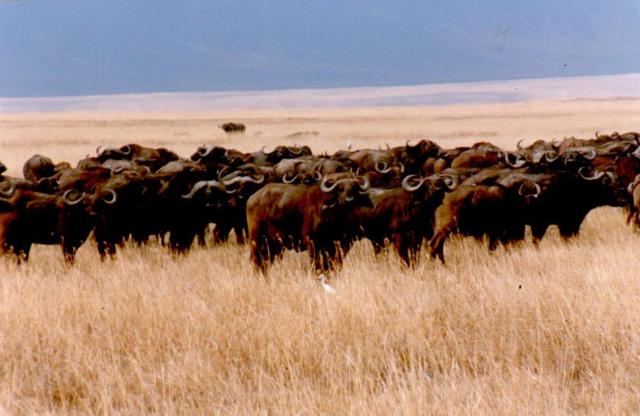 Anyway, we arrived safely, were met by our guide and driver who, I think, was called Moses or Jesus or some such Biblical name. He was a cheery fellow who saw us to a hotel, for a night’s kip before we headed for the Ngoro-ngoro crater and our first taste of wildlife.

The crater is an extinct volcano and the wildlife in it, we were told, had been trapped there so it had developed somewhat separately from that living on the rest of the massive savannas that make up the Masai Mara and Serengeti game reserves.

At least that’s what I recall nearly 30 years on. Could be rubbish and, frankly, if you care enough to question it, there’s always Wiki…

It was spectacular. Today it would be phones but back then we had this rather splendid camera recommended by the Archaeologist.

It had lenses you changed and dials and numbers and SLRs and all sorts. I hadn’t a clue, if I’m honest but the Textiliste had researched it and we took some part way decent pictures, courtesy of her guidance. 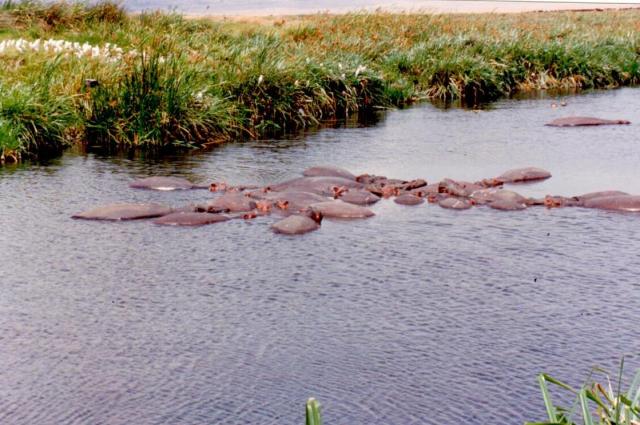 In fact by the end of week one, I had listened to her instructions often enough to be confident in my own guidance. Back then, it seemed natural to pass on my new found knowledge; now I realise it is gratuitous mansplaining. And thus we men are educated in the error of our ways…

The one downside to life in the crater was the rather fragile nature of the power supply at the hotel. Twice it collapsed completely for 24 hours rendering the cooking non existent and the toilets unusable.  We had treated ourselves but, at that point, camping appeared to have been a better option.

We had a ball. Well apart from the picnic where a kite took my cheese roll right out of my hand. Moses laughed and explained how lucky I was that the wretched bird hadn’t taken a bit of me at the same time. Of course I immediately saw the funny side…

But of course, it was the wildlife and the extraordinary scenery that made this trip. Here are a few images.

Next time: The Serengeti and Treetops

My name is Geoff Le Pard. Once I was a lawyer; now I am a writer. I've published four books - Dead Flies and Sherry Trifle, My Father and Other Liars, Salisbury Square and Buster & Moo. In addition I have published three anthologies of short stories and a memoir of my mother. More will appear soon. I will try and continue to blog regularly at geofflepard.com about whatever takes my fancy. I hope it does yours too. These are my thoughts and no one else is to blame. If you want to nab anything I post, please acknowledge where it came from.
View all posts by TanGental →
This entry was posted in Animals, memories, miscellany, Photograph, travel and tagged holiday, humour, Kenya, Tanzania, travel. Bookmark the permalink.