Charli’s prompt this week is about the importance of names.

December 15, 2016 prompt: In 99 words (no more, no less) explore the importance of a name within a story. It can be naming an experience, introducing an extraordinary name, or clarifying a name (who can forget Who’s on First). Go where the prompt leads.

My grandfather hated his given name – Percival, shortened to Percy. My father loathed his – Desmond, preferring his school given nickname of Lep, coming from our surname. I hoped to be the new Lep when I went to secondary school but the nearest I got was Leps and I hated the pluralising. The Lawyer is happy to be a plural, Sleps to his buddies. He is one of several Sams, each of whom went (sadly we cannot say ‘go’ as one is now no longer with us) by their nicknames, derivatives of their names or, in an old fashioned homage to public schooling, their surnames.

As I’ve commented on this blog before, I felt let down by my parents who failed to give me a second a Christian name, unlike the Archaeologist, whose middle name is my mother’s maiden name, Francis. How can parents be so thoughtless not to see that coming?

My mother told me I could adopt my own, so aged about 7, Thomas was inserted – proving my love of a certain bold underdog, the Tank Engine Thomas. The only proof I have of this momentary madness is in the First Day Covers of the time: is this a British eccentricity to make a thing of the first day of issue of a new set of stamps? We did and dad collected each one assiduously form the mid 1950s until his death. After the adoption of my new name it wasn’t only the Archaeologist who had a middle intial on that special day (we alternated who the new cover set would be addressed to – you needed the special postmark). 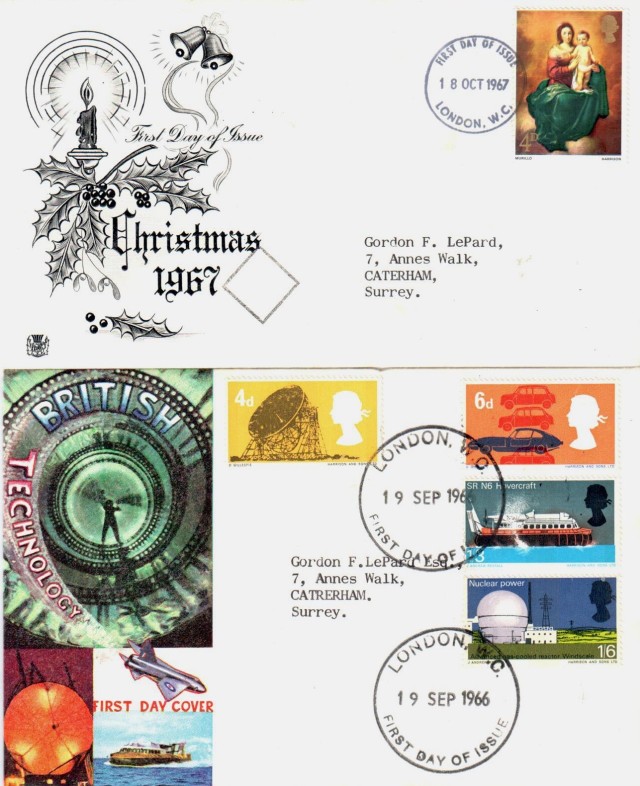 Why Thomas and not Tintin or Paddington or one of the other childhood heroes I had? Because of another of The Reverend W Awdry’s characters, Gordon the Big Engine. Gordon is cold, aloof, well aware of his superiority over Thomas, at least that’s the way I remember it. A bit like an older brother whose irritation with the constant presence of his younger sibling was only too apparent. My brother’s given name is Gordon. Awdry, for all his great skills failed to name any of his Sodor trains Geoff, or even (cringe as you write this) Jeff. So I took Thomas. I need time in therapy clearly.

Oh and the Jeff/Geoff dilemma? Another source of irritation, up there with having to spell my surname to everyone and correcting so many who want to make it La Pard or insert an irrelevant hyphen into it – Le-Pard. And don’t start me on phone callers who, on hearing my cherry ‘Halloo!’, with its upbeat interrogative ending, say, ‘Is that Mrs Le Pard?’ Grrrrr.

Yes names are mostly a trial and a burden.

So what do Mary and her family make of names?

The Devil’s in the Detail

‘Why did you call me Penelope?’ Penny said, apropos of nothing.

Paul laughed. ‘You mum had a fixation with Lady Penelope.’ When Penny looked blank, Paul, said, ‘Thunderbirds. Your grandma had a doll and gave it to mum.’

‘You named me after a doll? Susan got hers from her grandma and Ginny from some tennis player. At least they were real.’

Paul and Mary exchanged a look causing Penny to leave in a huff.

Later Penny watched old episodes on YouTube. Even though you saw the strings, Lady Penelope was rather cool.

Other instalments in the family saga are found here.

My name is Geoff Le Pard. Once I was a lawyer; now I am a writer. I've published several books: a four book series following Harry Spittle as he grows from hapless student to hapless partner in a London law firm; four others in different genres; a book of poetry; four anthologies of short fiction; and a memoir of my mother. I have several more in the pipeline. I have been blogging regularly since 2014, on topic as diverse as: poetry based on famous poems; memories from my life; my garden; my dog; a whole variety of short fiction; my attempts at baking and food; travel and the consequent disasters; theatre, film and book reviews; and the occasional thought piece. Mostly it is whatever takes my fancy. I avoid politics, mostly, and religion, always. I don't mean to upset anyone but if I do, well, sorry and I suggest you go elsewhere. These are my thoughts and no one else is to blame. If you want to nab anything I post, please acknowledge where it came from.
View all posts by TanGental →
This entry was posted in creative writing, flash fiction, prompt, short story and tagged Carrot Ranch Congress of Rough Writers, flash fiction, names, short stories. Bookmark the permalink.