Looking up, looking down #justthinking

I walk the jolly streets of South London a lot, taking Dog, or him me, on many a ramble. We end up in various parks, woods and other green spaces. Once such, Brockwell Park is a favourite. As I walked in the gates and bent to unclip his lead, I noticed the plaque above. I’ve walked over it, past it, by it countless times and never noticed it but this time, I looked and saw.

The symbol is the Victoria Cross. Often – most often – the highest military award for gallantry is awarded posthumously. The dull bronze of the medal is cast from a cannon used in the Crimea I believe.

As we walked – I was with a friend and his utterly potty Hungarian Vizsla – we talked about who this chap might be and when the plaque had been placed there.  In fact the stone has only been in situ for a year – the 100th anniversary of his noble action which, while leaving him blind in one eye and crippled didn’t kill him. Indeed having recuperated 2nd Lieutenant Geary returned to action with the Royal Flying corps, survived WW1, emigrated to Canada, was a Major in the Canadian army in WW2 and lived to 1976. A bit about him here. He was born but a short way away from the park however, hence the stone.

I can’t but see something like this and I’m overtaken by two strong emotions. First, I think about members of my family who fought in the Great war. My grandfather Percy also in the Royal Flying Corps.

Also injured and forced to convalesce after a plane crash into the cliffs at Dover.

Or my great uncles Edward and Willie Dyson 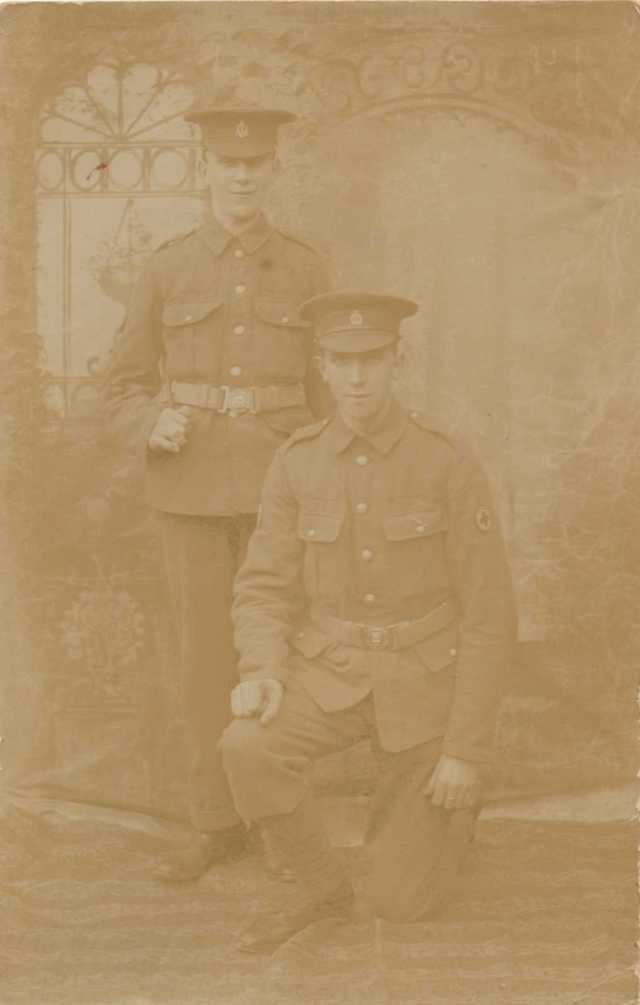 Who acted as ambulance drivers and stretcher bearers. Willie died of a brain hemorrhage the day after he was awarded the Military Medal for bravery. 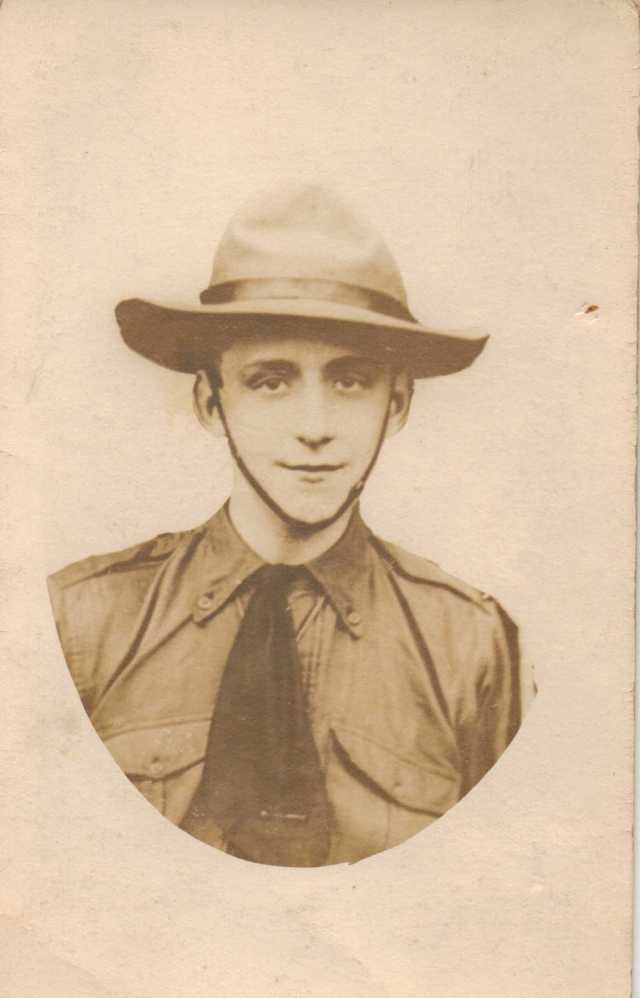 And looking at this picture of Willie, taken sometime in 1916, it’s his youth that hits hardest. He was just starting out and then killed in what history would indicate was senseless slaughter.

And there’s the second emotion. I have a son of 26 and a daughter of 23. If we were to fall into a conflict, an existential battle, these would be the young faces in the equivalent pictures. All that is left of a life as yet promising much and unfulfilled.

And on the news I see pictures of Aleppo and Raqqa and Fallujah, pictures of crated buildings, dust stained faces and death and think about those lives torn asunder.

And I carry on walking and try and look up. Up is easier on the eye. Up is uncluttered by man’s ambition, by monuments of any kind whether to heroes, who little knew why they were being brave or to the kind of national aggrandisement that leads to hubristic wars, up is the way to escapism. Up is what hope looks like, a blank canvas of possibilities no one has written on. 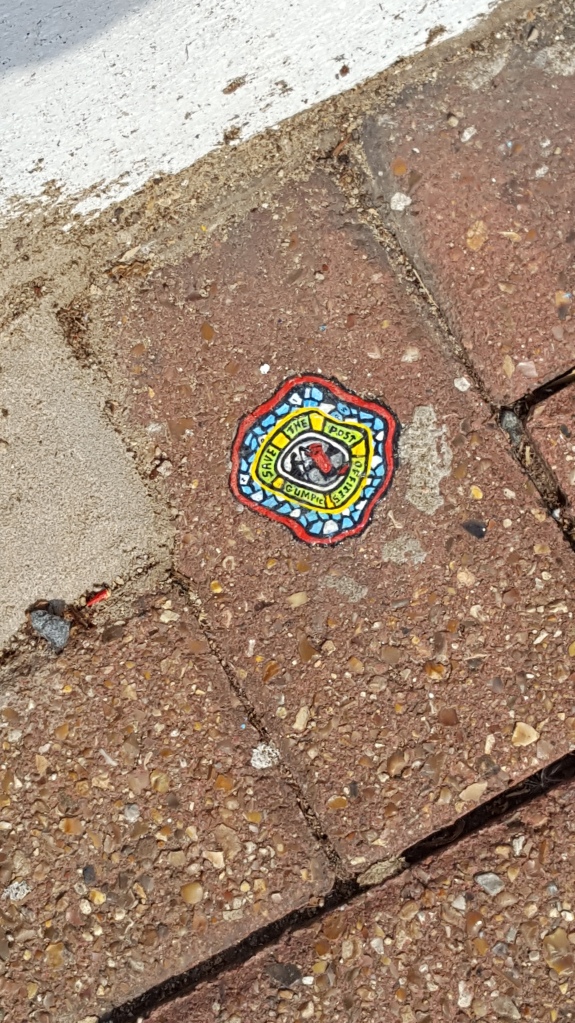 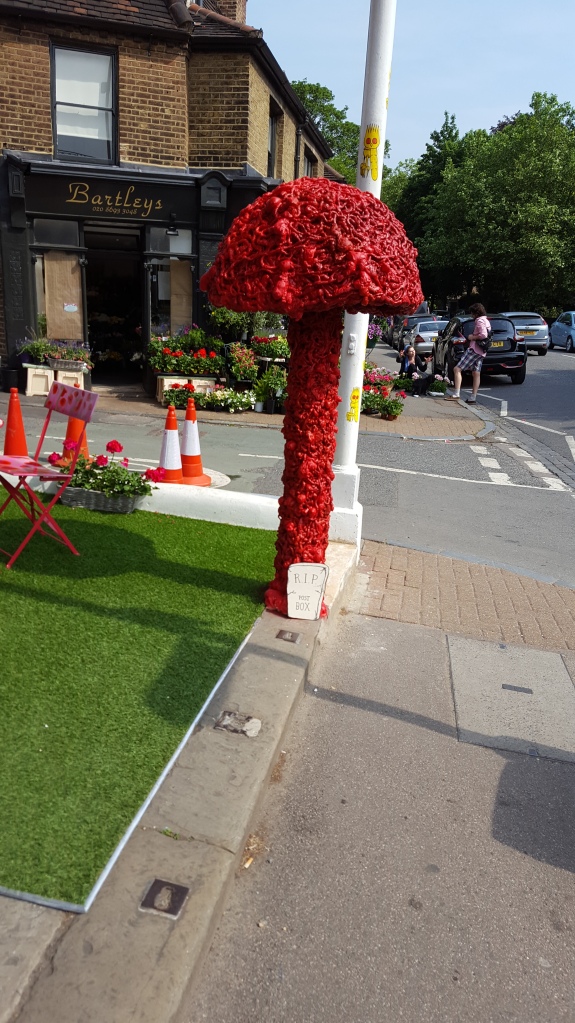 because down is real and one must stay real if we are ever to break the cycles of distrust and despair that will forever hold us back as a species.

But a little bit of up, every now and again is good for the constitution.

And I’ll end with cheese…

My name is Geoff Le Pard. Once I was a lawyer; now I am a writer. I've published several books: a four book series following Harry Spittle as he grows from hapless student to hapless partner in a London law firm; four others in different genres; a book of poetry; four anthologies of short fiction; and a memoir of my mother. I have several more in the pipeline. I have been blogging regularly since 2014, on topic as diverse as: poetry based on famous poems; memories from my life; my garden; my dog; a whole variety of short fiction; my attempts at baking and food; travel and the consequent disasters; theatre, film and book reviews; and the occasional thought piece. Mostly it is whatever takes my fancy. I avoid politics, mostly, and religion, always. I don't mean to upset anyone but if I do, well, sorry and I suggest you go elsewhere. These are my thoughts and no one else is to blame. If you want to nab anything I post, please acknowledge where it came from.
View all posts by TanGental →
This entry was posted in memories, WW1, Youth and tagged Benjamin Geary, Brockwell Hall, Brockwell Park, edward dyson, Percy Francis, willie dyson. Bookmark the permalink.

25 Responses to Looking up, looking down #justthinking