And the winner is…

You have kindly voted for your favourite of my Nanthology stories and it’s time to reveal the winner.

In equal second place we have

But the winner is

This is the complete winner. Thank you for reading and for voting. I’ve enjoyed it immensely. In the New Year I will publish the complete set so watch this space. 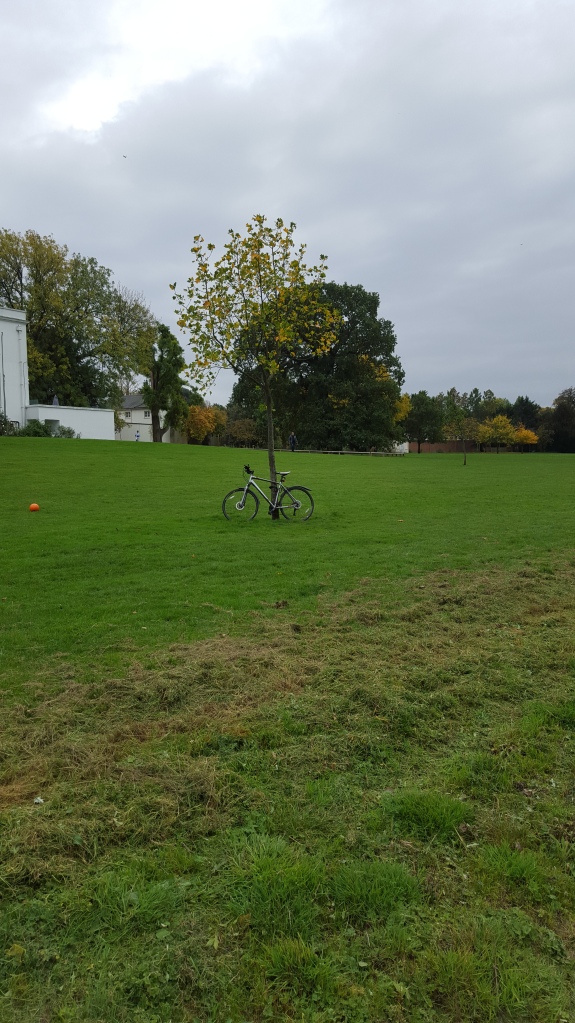 Mrs Pickwick didn’t usually come to the park on Saturdays. It was too painful. But something had dragged her and her dog, Pollen, through the gates. As she turned the corner she did a double take. Jimmy’s old bicycle was chained to the tree. Calling Pollen she glanced round. There was no one nearby. She threw a tennis ball and followed the bemused animal to where it lay. Pollen didn’t do chasing. He understood something was expected but he was unclear what.

Mrs Pickwick bent and checked the frame. Sure enough the residue of the sticky label that Jimmy had tried to remove when he was teased about his love of Thomas the Tank engine clung to the underside of the crossbar.

How had her son’s bike turned up here, in this park, chained to this tree?

Over towards the far fence a game of football was in progress. Shrill cries bit into her like ice cream on damaged teeth. Voices at once young and confident told of unbridled enjoyment.

Mrs Pickwick scanned the faces, looking for something even she didn’t know what, as she took in a smile here, a frown of concentration there, furious shouts of encouragement everywhere. It had to belong to one of the players but which?

It took her only a few moments to spot him; a gangling youngster on the fringe of the play, tucked away on the left hand side. He seemed to have disproportionately large knees and elbows. Nothing of his appearance reminded her of Jimmy save his stance: hunched, arms tight folded, eyes staring at the ground. Jimmy would have hated being here too.

A shout and he looked up. Surprise followed by terror filled his face. He looked ready to run, to dive on the ground but somehow he held himself rigid and let the ball hit his head. It seemed to envelope his whole face before springing away back the way it had come.

Cries told both the boy and Mrs Pickwick that he had done a good thing though it was clear to her that neither of them were sure what.

No one paid the boy heed as he rubbed his pink-glowing cheek and tested his nose for bruising.

Mrs Pickwick threw the tennis ball towards the touchline and followed Pollen towards it. A few parents watched on the far side. It wasn’t at all clear who they supported but Mrs Pickwick was fairly certain none of them were interested in the hapless fullback.

After another five minutes Mrs Pickwick collected the dog and ball and headed for the gate. Here she bought a tea from the little stall and sat and waited. It would be unlikely she thought for the boy who had the bike to leave by the back gate. She told herself it was harmless. Just interest really, finding out who had Jimmy’s old bike.

It’s unlikely he will survive. We’ll do what we can to make him peaceful. It’s not something we can explain. I’m sorry.

Mrs Pickwick snapped back to the present. Some boys were leaving, joshing each other. A couple of parents told them to be careful as they nearly bumped into her. They mumbled apologies, being at an age where their exuberance and confidence with each other dissipated instantly in the presence of an adult. She ignored them straining to see the tall boy with, she was sure, Jimmy’s bike but he didn’t appear.

The grey November day was closing in and the park would shut soon. She released Pollen and set off on one last circuit, wondering why he hadn’t left. Twenty minutes later she knew for sure that both the boy and the bike had gone.

Mrs Pickwick tried not think about the boy but she failed as she knew she would. The following day and every day after she went to the park but she saw no one like the boy or the bike. He was a stranger; why did it matter? He’d bought the bike second hand from whoever had cleared Jimmy’s things. She’d been so upset when she’d found him gone that she’d left that side to her husband, one of the last things he did before he left too.

I’m not saying you need to get over it but I can’t live like this. He’s gone and I need more than your silences.

She understood him. She needed more than her silences too; that was her problem. And his. The fact he couldn’t fill any of the spaces left when Jimmy d… went.

The next Saturday and there was a game of football. Cautiously Mrs Pickwick walked over to where a group of adults spectated. The gangly boy wasn’t playing. She gripped Pollen’s lead tight and asked the man nearest her. He was concentrating furiously and didn’t seem pleased to be interrupted. ‘The boy who played fullback last week. Tall, not very good. Is he ill?’

‘Who? Oh Rupert. Nah, he was just filling in. He hates football.’

Mrs Pickwick nodded. She didn’t know what else to ask but as she turned the man said, ‘That’s his mum. Over there.’ He pointed at a woman standing apart, near the goal mouth. ‘Her other lad is the centre forward. Got class that one. OH WELL PLAYED.’

Mrs Pickwick leapt back at the bellow and moved away. The man didn’t seem to notice. She hadn’t a plan, hadn’t really thought this through but soon enough she was standing at the woman’s side.

‘Excuse me. Are you Rupert’s mum?’

The woman – she looked frozen from the way she shrank into her coat – smiled easily. ‘Yes. Has he done something?’

‘Only he’s always poking into this and that, always going off.’

‘That bloody bike. My husband thought it would be a good thing, make him get some exercise but I never see him. Independence is one thing, but… It’s a worry, isn’t it? At their age.’

‘Enjoy it? Yes, I suppose. I sorry do we know each other? Which one’s yours?’

‘On no. My son isn’t playing. I just… he mentioned Rupert, he’s a friend, and I saw his brother was playing and someone said you were their mum.’

The woman frowned. ‘Rupert has a friend? He’s not mentioned anyone. Bit of a loner, really. What’s your son’s name?’

‘Jimmy. He’s with his… friends. I think it’s recent, them being friendly. They both love their bikes I think.’

‘Well Jimmy tells you more than Rupert tells me, that’s for sure. He gets quite shirty if I ask. ‘Stop going on, mum’.’ She pulled a face. ‘You know the sort of thing. Maybe Jimmy would like to come round for tea?’

‘Jimmy’s the same. You know, keeps things to a need to know basis. Maybe we should let them just get on, on their own for now. See how it goes.’

The woman smiled; Mrs Pickwick thought she saw relief. ‘Well, let me give you my number and address. If your Jimmy says he’d like to come over you’ll know where to find us. I’m Constance by the way. Constance Cloud.’

It took Mrs Pickwick an hour to find the courage to set out for the Cloud house. Pollen who was rather overweight and generally indolent found the idea of a second walk both strange and unenticing but he knew better than to resist. There was purpose in Mrs Pickwick’s preparations that told him all he needed to know about her mood.

The Cloud house was a large, rather dilapidated building with a slate roof and a whitewashed pebble-dashed exterior. As Mrs Pickwick counted down the numbers towards number 23 she could feel her doubts setting in. What was she expecting? It was beginning to get dark and the chances of a twelve year old being out on his bike at this time on a Saturday seemed remote.

As she was on the verge of turning round and rethinking her strategy, not that she had exactly anything as grand as a strategy, the front door of number 23 opened and Rupert Cloud emerged pushing Jimmy’s bike.

Mrs Pickwick waited, holding her breath, not that’s she noticed. Rupert, hood up did not appear to have seen her, watching on the far side of the road but as he reached the pavement he stopped and said, ‘I like your dog. I’ve seen him in the park.’

Mrs Pickwick took a moment. ‘Yes, I’ve seen you playing there. Football. You didn’t look like you enjoyed it.’

‘Pollen. He shed dust when we first had him and my husband thought it was like pollen.’

To her surprise Rupert laughed. He-hawed would have been a better description. ‘That’s brilliant. Can I, you know hold his lead?’

‘I’m off to the chippy. Mum makes rubbish chips, though her burgers are ace.’ Rupert stroked the dog, who was grateful for the rest.

They began walking for a while in silence. Then she said, ‘Do you have a dog?’

‘Naw. Mum is allergic to most of them. Comes out in a rash. I like Pollen.’

‘If you wanted… you know, if your parents were happy, you could walk him for me. I’d pay. He needs more exercise than I can give him.’

Pollen looked up, aware that something was going on to his disadvantage but unsure what.

Rupert nodded. ‘Cool. Since dad left mum’s been going on about us getting a job.”

‘I like your bike. You look after it well.’

‘It’s really sad, you know. A boy had it and died. My dad told me when he got it for me. I kind of feel I should kept it clean, you know? Respect.’

Mrs Pickwick stopped. ‘Yes Rupert. I think he’d like that.’ She smiled and offered him Pollen’s lead, taking the bicycle from him, a familiar swapping of roles. ‘He’d like that a lot.’

My name is Geoff Le Pard. Once I was a lawyer; now I am a writer. I've published several books: a four book series following Harry Spittle as he grows from hapless student to hapless partner in a London law firm; four others in different genres; a book of poetry; four anthologies of short fiction; and a memoir of my mother. I have several more in the pipeline. I have been blogging regularly since 2014, on topic as diverse as: poetry based on famous poems; memories from my life; my garden; my dog; a whole variety of short fiction; my attempts at baking and food; travel and the consequent disasters; theatre, film and book reviews; and the occasional thought piece. Mostly it is whatever takes my fancy. I avoid politics, mostly, and religion, always. I don't mean to upset anyone but if I do, well, sorry and I suggest you go elsewhere. These are my thoughts and no one else is to blame. If you want to nab anything I post, please acknowledge where it came from.
View all posts by TanGental →
This entry was posted in miscellany, nanthology and tagged nanthology, poll, short story, winner. Bookmark the permalink.

21 Responses to And the winner is…