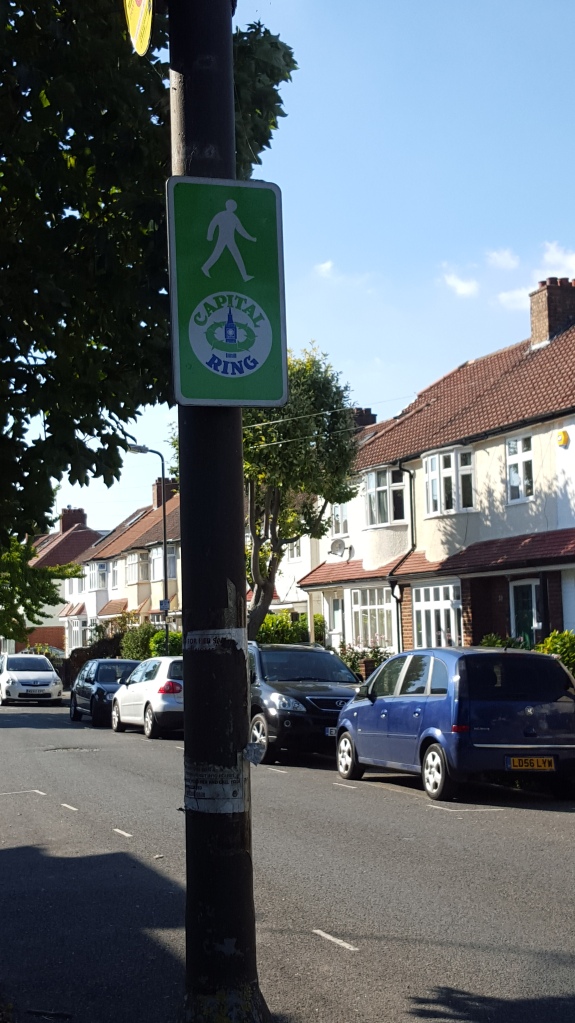 The Capital Ring is a strategic walking route that completely encircles inner and central London. It is approximately 78 miles long and cuts through as many green spaces as is possible. 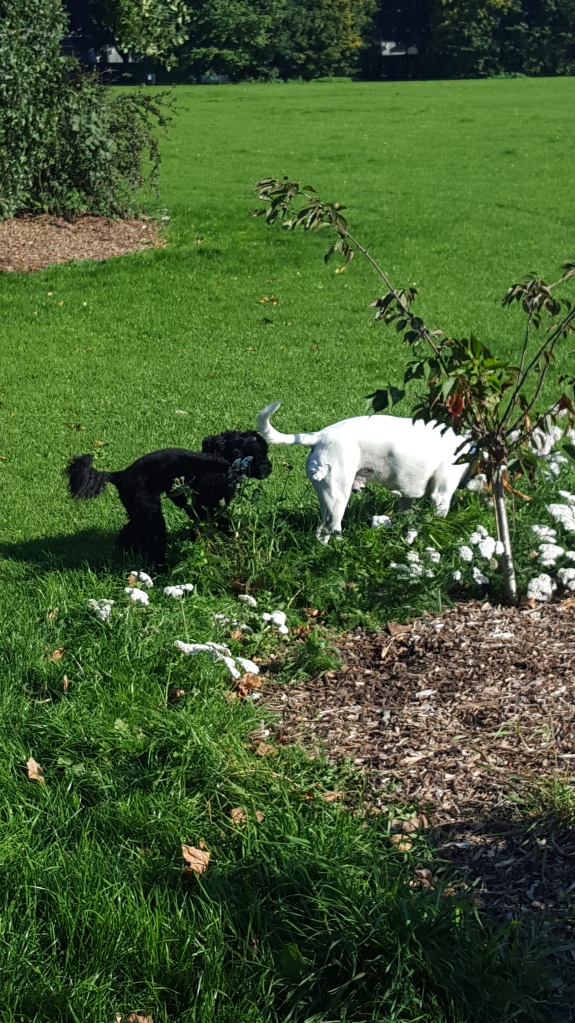 A canine proctologist interrupted Dog’s sojourn early in our walk

We hadn’t intended another stretch so soon, Dog and me, but the day was lovely, there were no pressing engagements before a dance class at 8.30 (we are trying to master the Viennese Waltz without any accompanying gyroscopic nausea – a Herculean task) and this stretch, traversing as it does affluent South West London, is full of rather good teashops and delis.

So, Oyster card to the fore we headed for the station – train to Clapham Junction, change to Earlsfield. 25 minutes tops.

The first stretch is, let’s be honest, dull. The development around Garret Lane is rather squeezed and tired. It used to house a lot of industrial London – the Wandle River that we crossed last time is one of the faster flowing tributaries into the Thames so industry and especially mills flourished. Mostly these have gone but some remain with the occasional treat – a mosque.

And Wimbledon Park Station is classic ‘early tube’ – not so much rococo, more mug-of-cocoa – and no worse for that 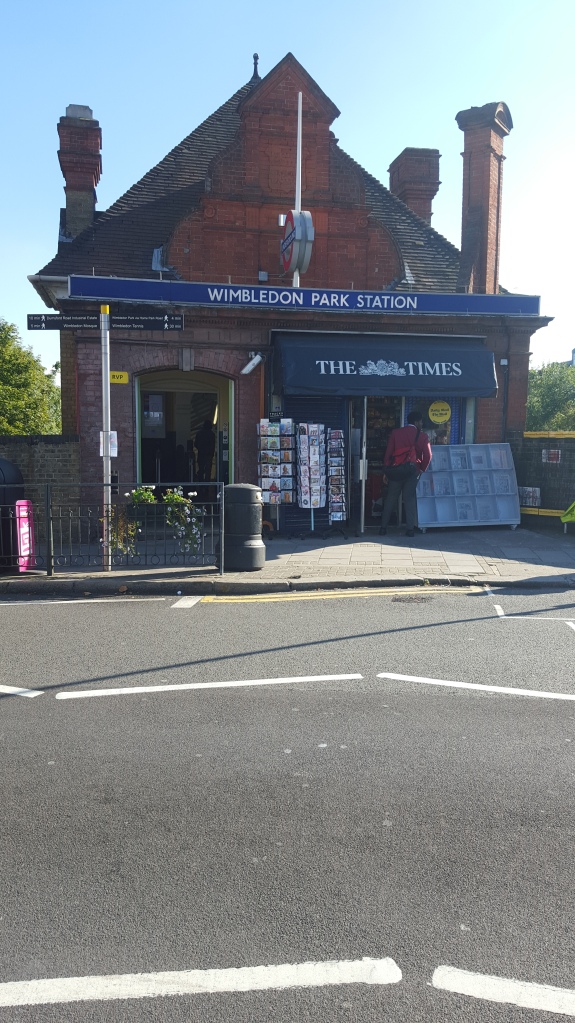 rather cute with magnificent chimneys

As the road climbs the houses grow, the gates are more fortified and the builders seem to be covered in glitter as much as dust. 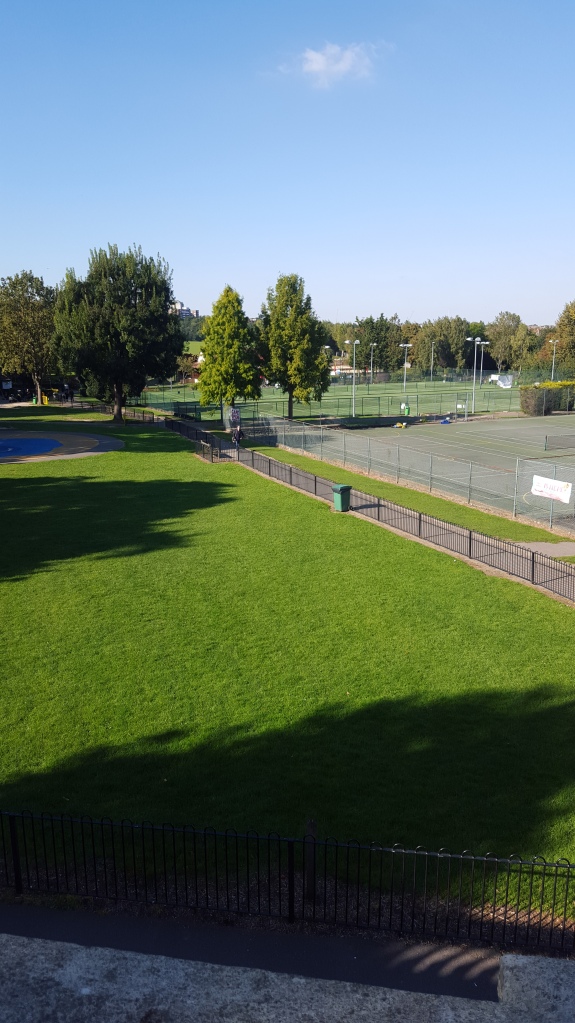 And then the gate to Wimbledon Park itself and the beginning of a nearly seven mile stretch of greenery.

Wimbledon Park is sanitised – a children’s playground and tennis courts and manicured lawns; but the boating lake and swans and the wildfowl give it a sense of peace and serenity… well, except during late June and early July when the tennis is on. Then it’s utterly horrendous. I caught a glimpse of the roof of Centre Court, in the distance but didn’t bother to capture it. These seemed more worthy.

Leaving the Park we wandered along some more residential streets for half a mile before we crossed a busy road and entered the start of Putney heath. Real woods and a vigorous sniffing session for Dog. 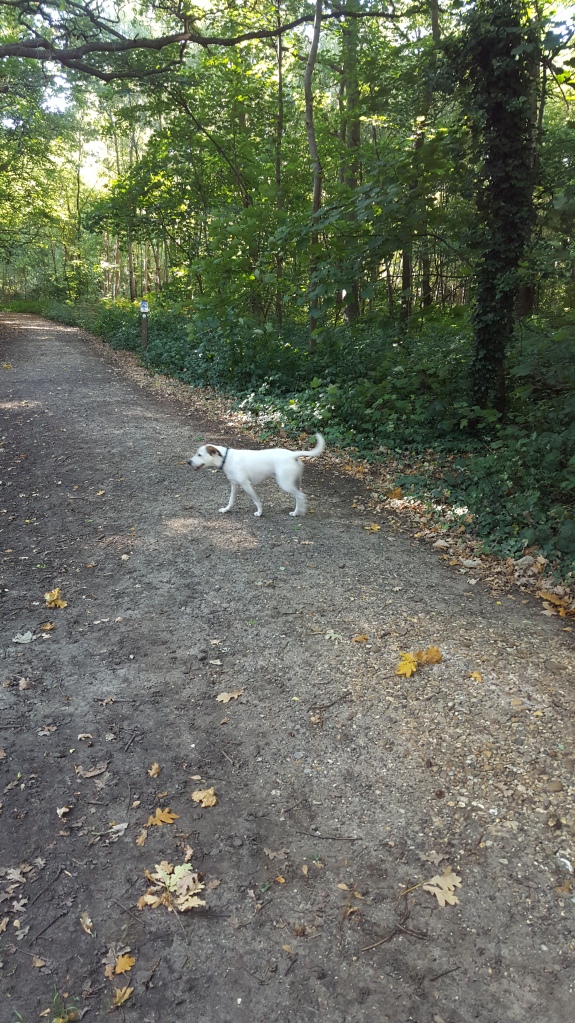 and on this side there’s… hmm, cinnamon?

Wimbledon Common comes next and with it its famous windmill.

The paths stretch in every direction, past a golf course – curiously the London Scottish

well, come on. Stop fiddling with that phone can’t you?

In the middle of the woods I came upon a small lake; all rather tranquil

a family looked like they were fishing; I left them to it 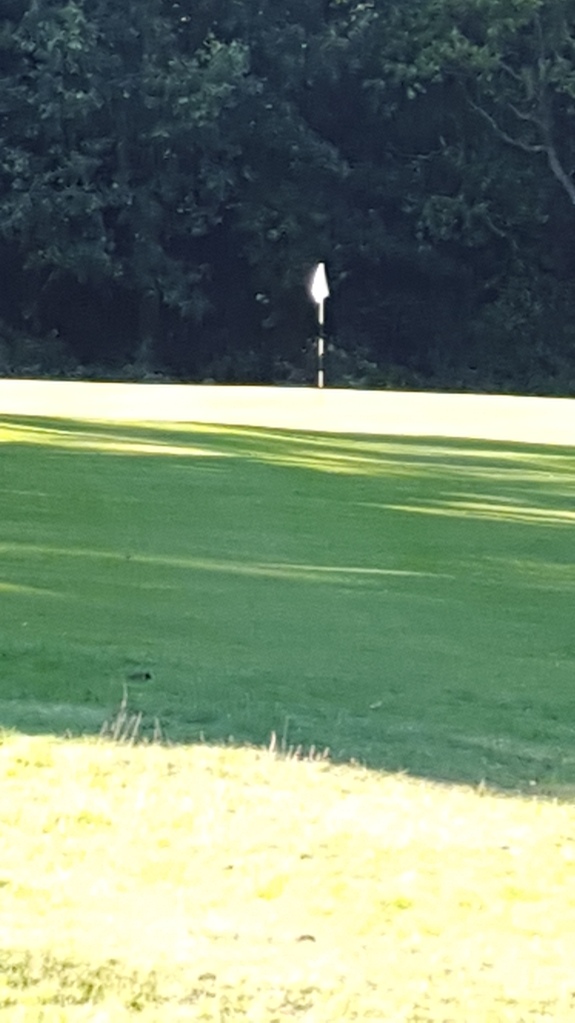 This golf course seems to be possessed; or ready for a night game with glow in the dark pins

Rather sadly I cannot ever really think of Wimbledon Common without thinking of an awful murder there some twenty years ago. It’s a beautiful spot forever rather soured in my memory. Today, however, if was pretty near perfect. 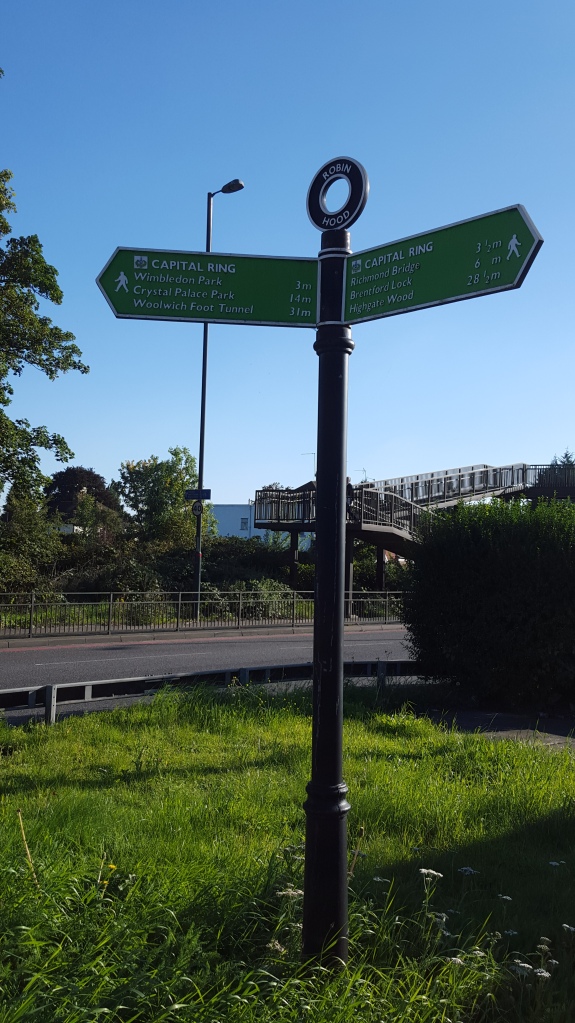 A reminder how far to go to Richmond

As you cross the main road south, the A3, you stand next to a box that riders can wait in. There are even traffic light controls at rider height. 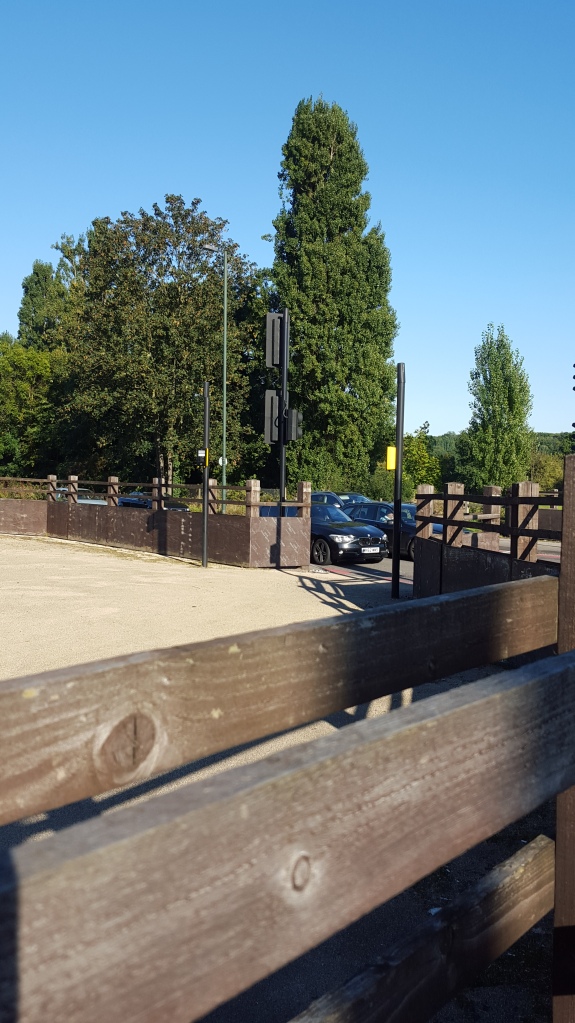 Horses are given preferential treatment, but given how fast the cars go here, having a system that keeps them and the riders safe makes sense.

Wimbledon Common now gives way to the massive Royal Hunting ground that is Richmond park. It is huge, home to two types of deer and many Londoners enjoying various forms of pasttime and leisure pursuit. In truth, but for the despotic indifference of our monarchs, these sorts of places wouldn’t be here today. Ironic huh?

To give you a sense of the wonderfully distinct nature of the park I made a spinning selfie. I seem to be a little worried by the technology. As you will note at the end of the clip, Dog is more interested in the man sitting behind me eating a cheese sandwich.

Soon after you enter the park you see this large white house, home to the Royal Ballet I believe. Not a bad spot to suffer for your feet, as indeed I was doing by this point. 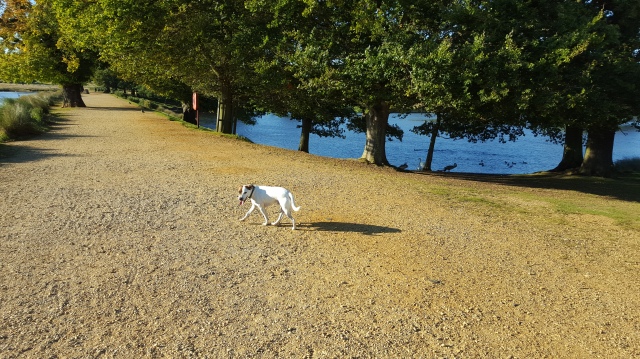 As we headed deeper into the centre we crossed a causeway between two startlingly blue ponds; the colours are vibrant hereabouts but these were gems.

I could almost imagine a swim… not.

I’m pretty sure Richmond Park is one of Europe’s largest urban open spaces. In 1987 I took a  walk with some friends after the October hurricane of that year struck and was startled at how the wind had been so destructive that mature oaks had had the tops twisted off like so much paper. Most of this devastation has gone now but back then it felt tragic.

After the dip for the ponds we climbed steadily until we turned left and headed for the Petersham gate. On the way we passed a major bonfire

Signs told us about the Rhododendron clearances going on; not before time. I recall in the 1970s my dad fulminating at the Forestry commission (this in the New Forest) for not spending enough time scrubbing out these invading Himalayan plants. Always ahead of his time, my dad – or at least he thought so.

Once at the crest of the escarpment, we looked west towards the affluent suburbs as well as on to Twickenham. At this point, I still had hopes for the Rugby World Cup that is being played there… fool 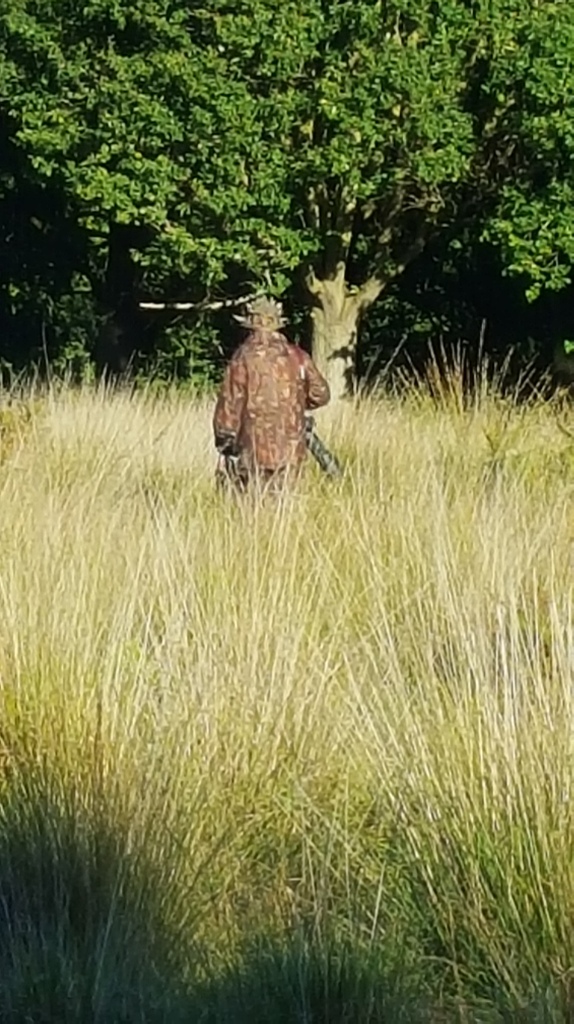 We didn’t see that many people, this being a midweek walk: this chap looks like some urban terrorist but was in fact a rather shy looking Twitcher.

Just before the crest…

… walking along the ridge…

… before descending to Petersham

Behind some gates there is a mound, apparently, an ancient burial spot but also, so rumour has it, the place Henry VIII waited for a beacon that started at the Tower where Anne Boleyn had been beheaded, thus enabling him to marry Jane Seymour. Nice.

Exiting the Park things become a little more built up but the compensations are, first, the buildings are rather splendid examples of old architecture and second we are now in hailing distance of the River Thames. Readers of this blog will know I am not at all aquatic but even I can appreciate – from a safe distance – the glories of our most famous river. 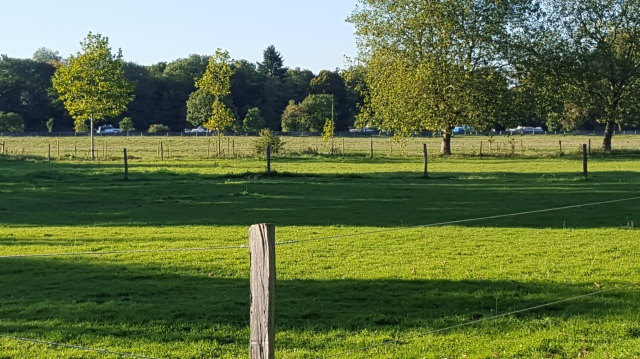 First up, Petersham meadows that are still flooded annually. A sign told me no dogs. Well ya boo sucks. You can see the river boats, all neatly moored. Beautiful as this stretch is it is also rather a pastiche of London, all a bit twee. 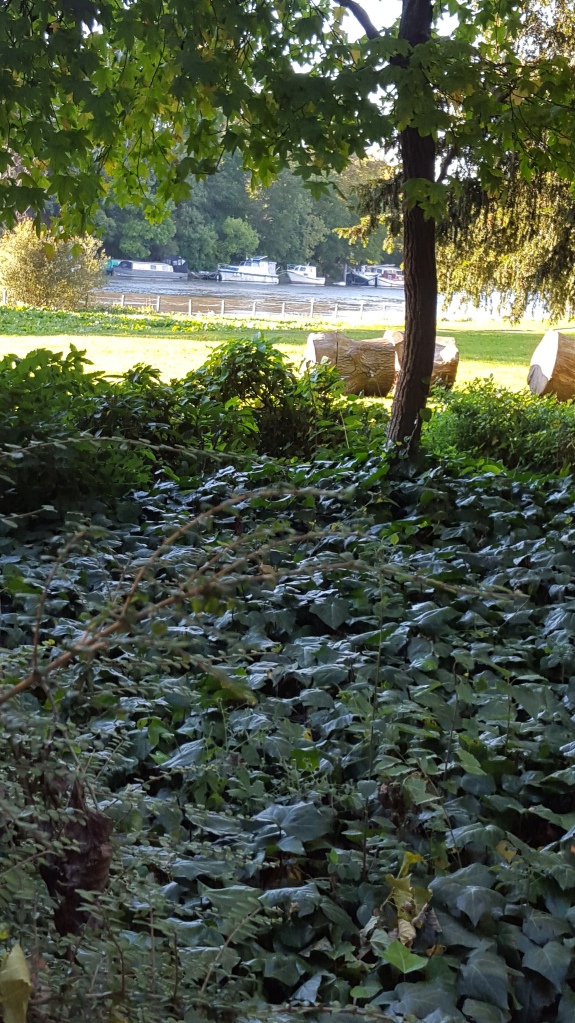 … and so the river proper. The river is still just about riparian here but if you were coming from the west you’ve already passed the last lock and soon enough this river is tidal

… ah ha, clearly a Martian come to check the salinity of the water and how it matches his own planet’s recently discovered streams

Richmond was crowded. School was out as was the sun and many yummy mummies and their charges (not many, if any, male carers in this patrician enclave – or should that be parochial?) The pace naturally slows as we began to dodge blondes with buggies – another characteristic. 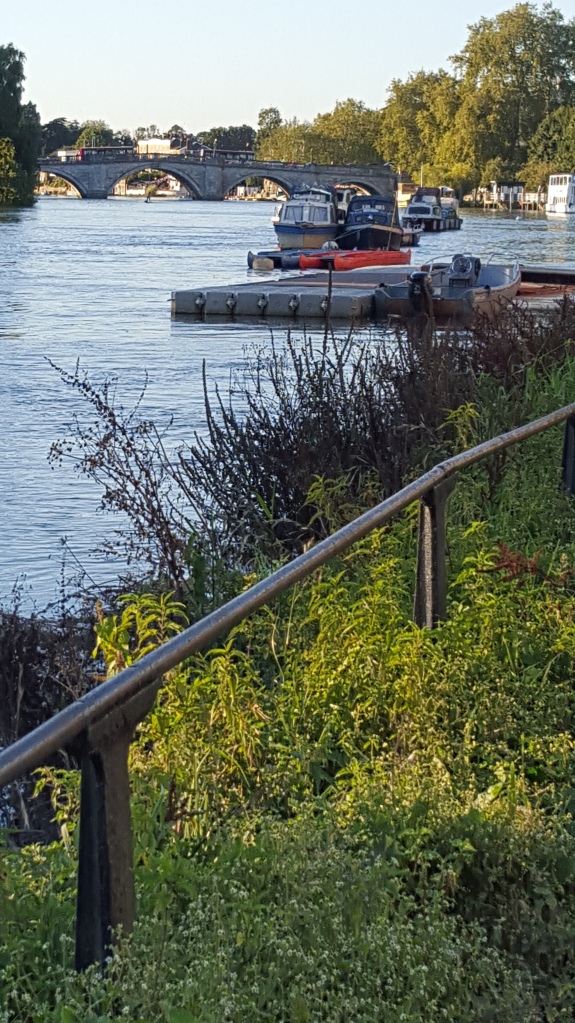 Richmond bridge ahead – the end of your walk

One of many large, new riverside blocks each flat no doubt commanding both a view and a premium… 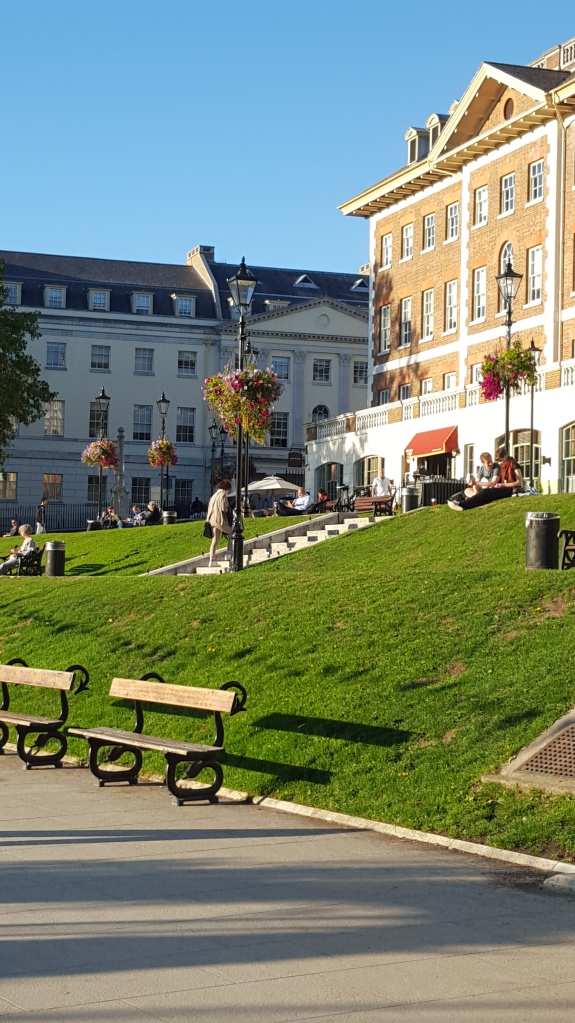 … and finally our end and a well earned cup of tea.

The best thing about the Capital Ring is the accessibility of each part. We caught the train to Clapham Junction and then back home (dogs still welcome on the train and tube – with buses it is in the discretion of the driver). We could have caught the train into central London or the tube.

Next time we will cross the Thames and head north along the Brent River and the Grand Union Canal and enjoy a wonderful nature reserve right beneath one of our busiest motorways, the M4 on the stretch out to Heathrow.

My name is Geoff Le Pard. Once I was a lawyer; now I am a writer. I've published several books: a four book series following Harry Spittle as he grows from hapless student to hapless partner in a London law firm; four others in different genres; a book of poetry; four anthologies of short fiction; and a memoir of my mother. I have several more in the pipeline. I have been blogging regularly since 2014, on topic as diverse as: poetry based on famous poems; memories from my life; my garden; my dog; a whole variety of short fiction; my attempts at baking and food; travel and the consequent disasters; theatre, film and book reviews; and the occasional thought piece. Mostly it is whatever takes my fancy. I avoid politics, mostly, and religion, always. I don't mean to upset anyone but if I do, well, sorry and I suggest you go elsewhere. These are my thoughts and no one else is to blame. If you want to nab anything I post, please acknowledge where it came from.
View all posts by TanGental →
This entry was posted in capital ring, miscellany, walking and tagged capital ring, earlsfield, Petersham, Richmond, Richmond Park, walking, walks, Wimbledon Common, Wimbledon Park. Bookmark the permalink.

24 Responses to #Capital_Ring – Earlsfield to Richmond