Colour on the Cards

The benefits of charity and thrift shops, at least if you know what you’re looking for.

Do you like Charity Shops? I do as you never know what you might find in them, and in my case where the discovery might take you. 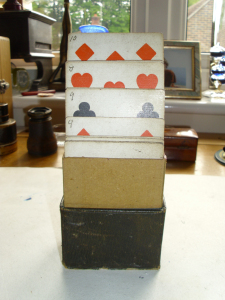 A little while ago I was in a local shop when I spotted a pack of playing cards in a glass case. I could see that the numbers had been written on, which told me that they were of some age as I knew numbers had been added to cards in the nineteenth century. Incidentally this had led to the term ‘Jack’ becoming socially acceptable, before this the lowest value court card had been known as the Knave in polite society, Jack was a much more lower class term (like using serviette instead of napkin). Thus in Great Expectations;

“He calls the knaves Jacks, this boy!” said Estella with disdain.

My name is Geoff Le Pard. Once I was a lawyer; now I am a writer. I've published several books: a four book series following Harry Spittle as he grows from hapless student to hapless partner in a London law firm; four others in different genres; a book of poetry; four anthologies of short fiction; and a memoir of my mother. I have several more in the pipeline. I have been blogging regularly since 2014, on topic as diverse as: poetry based on famous poems; memories from my life; my garden; my dog; a whole variety of short fiction; my attempts at baking and food; travel and the consequent disasters; theatre, film and book reviews; and the occasional thought piece. Mostly it is whatever takes my fancy. I avoid politics, mostly, and religion, always. I don't mean to upset anyone but if I do, well, sorry and I suggest you go elsewhere. These are my thoughts and no one else is to blame. If you want to nab anything I post, please acknowledge where it came from.
View all posts by TanGental →
This entry was posted in miscellany. Bookmark the permalink.

2 Responses to Colour on the Cards