A brief blog from bandage-land

Ok so he’s alive and if not kicking, tapping away. Thank you to everyone who kindly sent their good wishes; they are very welcome. I have decided not to post photos of my black and white three hole putting green, aka my stomach (what’s a stomach selfie? A belchie?) Instead, 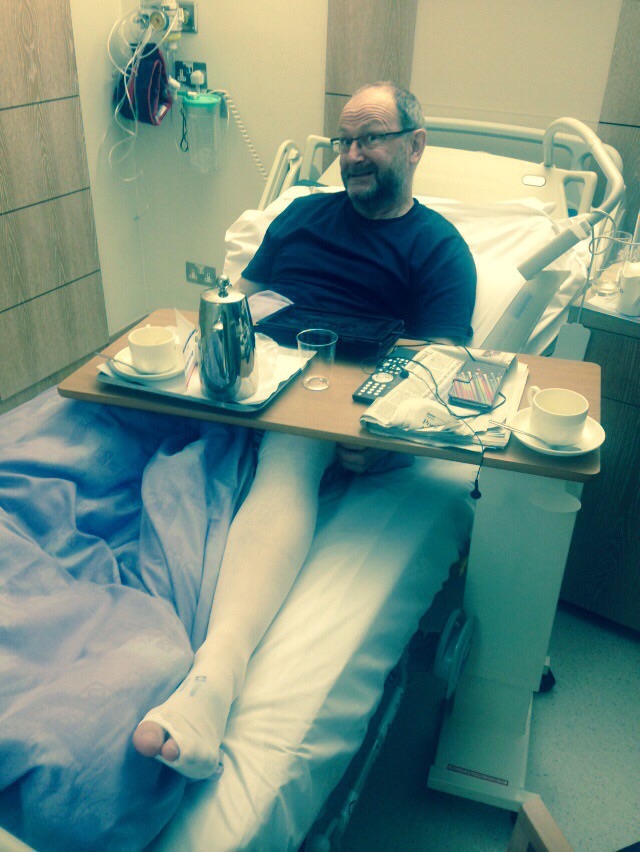 The purple gown has gone and all that remains are the stockings  – this morning, when I had been dressed thus for the op and the consultant said he was going to be working ‘on my groin area’ and after I’d probably need to pee sitting down I did wonder if this would end up a little bit more than a brief Grayson Perry moment.

Moving on, I said I’d post today but I want to diverge slightly. I know I owe you a chapter of Buster and Moo which I will sort at the weekend. For now I’m feeling in grateful mode and I’d like to give you some of my flash/poetry (that sounds a little like the Vogon captain in the Hitchhiker’s Guide to the Galaxy, thanking his unexpected guests by reading his poetry) and the challenges from which they emanate. I would encourage you to look at these lovely prompts and join in. I’ve been following three hosts – David Borrowdale, Esther Newton, and Rebekah Postupak – for while; each has created their own supportive communities, all in their own very distinctive ways and all have helped me improve my flash and with that improve my overall writing, especially my books. If you suffer from overwrititis as I do these will help you massively.

‘Beat Fourteen, thirty four years.’ The woman in the head-office suit tapped at the tablet, acrylic-tipped fingers nailing his retirement. Konstabel Els shifted weight with practiced economy. He’d lived through apartheid’s certainties with discrete ambivalence, reinventing himself for Mandela’s golden years as a caring social guardian. He understood the chameleon. His calculated colour-blindness reflected back society’s slippery mores. As each new initiative took hold he shifted his prejudices to find the new norm while colleagues gave up. But some changes were too much. He knew people – that was his skill. Now this. ‘And you refuse to use a computer?’ ‘Ma’am, I can’t. That’s for your generation.’

A Sonnet for Our Time @geofflepard 101 words

Beat of a butterfly wing, rippling out;

Of Humanity. From such scintilla a crop

May shoot, stalling the crippling doubt

Which is the lot of the young. Untrammelled

By life’s cares, she hesitates. A tasting step,

At the world’s ways. Her chest is pummelled

By a heart, so pure and love absorbent,

Caressing with her eyes, embracing those

Who reciprocate her joy, who will choose

Her above the clashing cymbals and discordant

They are the here and now generation.

This is for today’s prompt. Best if you read it for yourself.

She screams like her soul is being waxed – her words, filtered by brick and plaster to an incoherence of despair, but I understand. Does she hear my moans; do they interrupt her divine demands? At least I know He hears me; she’s still debating away her doubts but she will learn. I will teach her.

The staff confide she’s a challenge; if I concentrate I can hear them as they meet her challenge. She moans then; she doesn’t know yet but He hears.

Last week I saw her outside, across the lawns and through the fence to the main house. She was dancing while two unbelievers held dog leads attached to her wrists. She wouldn’t let me meet her eyes but she will and they will be golden. Prophet’s eyes.

The signs appeared, yesterday, in the lines they mowed on His green page, in the message He shadowed through the trees. She is my Eve.

Today when they come, I will be ready. They will not neutralise my soul. He has called me. She’s calmer now, she hears their steps. Soon, Eve, your Adam will be with you and we will exult Him in our frenzy. They will be gone and Eden will be ours at last.

They stopped the chair to let him look along his arbour one last time, whispering in foggy ears for him to stir. He didn’t move and they turned, saddened at his incomprehension, but letting him have a private moment.

He smiled as they left. His eyes may be hollow but the westerly breeze showed him the arching boughs; the warming sun coloured in the dappling leaves and the mummeration of the insects stirred the blossom into as clear a picture as from any camera. He looked back down the long years, back to his sap filled adolescence when the land was brown and the living hard. He had planted his seeds with the tenderness of a lover sowing his own legacy. He nurtured the thin twigs through cruel seasons – sharp winters and harsh unforgiving summers – youthful confidence overcoming the setbacks and slights to his dreams. He marched with others at a siren’s call to far places where he learned of courage and friendship and inexplicable death. When he returned his hopes lay cracked and neglected, corrupted by indifference and constant dread. For a time he despaired; as with his dream, he withered, gnarling and twisting away from the light, unhealthy disease seeking an insidious hold in those dank drear places. They came, with money and paper and saws, offering a refuge from toil and a strong wall to hide his hopes. He prepared to go, it was all too much but some word, floating on a strong westerly caused him to pause. ‘Wait,’ she said. He had been waiting, ever since those tender, sweet-sweat-softened nights for that word. Like water to a wilted palm, at her touch he unfurled and grew tall. The charlatans and destroyers went, churlish and angry. Renewed, he bent again to his scheme but now he faced another, bending too, mimicking his swift fingers training, pruning, cropping, feeding, loving. The twists and gnarls were too deep-set but rather than try and change, rather than risk a fracture, they worked with Nature and as they all grew they leant, slowly at first, but ever constant in their intent until their fingers interlaced and they became one, dancing with and twining into and around each other. Each a different root stock but each reliant on the other for support and shade and health. Slower now, the work more delicate, intricate, shaping, shaving, giving form to their dreams until the glorious arbour of their love was complete.

Sightless, he looked at his lover, waiting at the end of their arbour, leaning on her stick, her eyes focused on the opposite bough. For the first time in the years since her death he stood and took his place opposite. Carefully he bent towards her and their lips met one last time, melting, melding, becoming one, becoming part of the glory. When they returned to find the empty chair, their initial apprehension slipped to smiles as they looked on the arbour and recognised the truth, just out of sight, on the edge of the shadows, two become one. And a recent sonnet

Taking from the senses, dulling compassion.

Poised to curtail another life; no crime

This act is instinctive. Fear grips

The target, knowing its very existence

Is lightly held. No appeal; resistance

Will be futile. The chance to flee slips

This murder is edge-balanced so fine.

Hope competes with despair. So thin a line.

The killer’s head turns; the prey slips his tweezers.

‘Come inside son. It’s late. Have some maltesers.’

More recently I have been following two others: Sacha Black and Ronovan.

Sacha Black has an extremely informative blog  with her writespiration posts, including prompts as well as sound, amusing and challenging advice and thinking (she stimulated a great debate with her post on the merits (or otherwise) of reading the ‘classics’) and this poem came from her photo prompt (#writespiration 31). Check her out too; my sense is she will soon have a similarly sized community going.

A line of dust

Till the rains come.

Or tears and sweat.

Only children have time

Soon enough the rains will come.

And finally but by no means last here is Ronovan. I try my hand at haiku, the short pithy and deeply challenging poetry. But look more widely at his blog, especially at his BeWoW concept. I hope it carries on and I can join in regularly. Here’s my contribution this week based on the two words below.

I had a French teacher at my grammar school, Miss Post – Peggy when we were being polite and a spoonerism when not. She cast me as Hoederer in Jean Paul Sartre’s Le Mains Sales. I had to be rugged so for the six weeks of rehearsing I grew a beard, my first. Come the night they coloured in the blond fluff. That one act with an eyebrow pencil crushed my creative muse for good.

Anyway to my haiku. A two verser this week, set in a school.

‘Why are you Miss, Miss?

If I walked past you, I’d know You

from your special smell.’

Maybe be you have a favourite? Do let me know. Now back to the narcotics. Nurse! NURSE….!

My name is Geoff Le Pard. Once I was a lawyer; now I am a writer. I've published several books: a four book series following Harry Spittle as he grows from hapless student to hapless partner in a London law firm; four others in different genres; a book of poetry; four anthologies of short fiction; and a memoir of my mother. I have several more in the pipeline. I have been blogging regularly since 2014, on topic as diverse as: poetry based on famous poems; memories from my life; my garden; my dog; a whole variety of short fiction; my attempts at baking and food; travel and the consequent disasters; theatre, film and book reviews; and the occasional thought piece. Mostly it is whatever takes my fancy. I avoid politics, mostly, and religion, always. I don't mean to upset anyone but if I do, well, sorry and I suggest you go elsewhere. These are my thoughts and no one else is to blame. If you want to nab anything I post, please acknowledge where it came from.
View all posts by TanGental →
This entry was posted in flash fiction, miscellany, poems, poetry, sonnets, writing and tagged David Borrowdale, Esther Newton, flash, poems, poetry, Rebekah Postupak, Sacha Black, sonnets, writing. Bookmark the permalink.

20 Responses to A brief blog from bandage-land