A thought and a favour

I want to talk about my next book.

The title I have is

But it’s not primarily about religion.

The basic premise arose from thinking about my relationship with my father. Years 0 to 16 were just dandy; years 16 to 25 were in varying degrees fine, shit, fine, really shit and meah. From 25 to when he died in 2005 they became increasingly excellent. I wanted to write about fathers. I also wanted to look at faith, but from both the point of view of people who had or were losing it and how they might move on or ow they might seek to restore it. So another father figure – in the case God the father – snuck in.

From those initial ideas a story grew: of two people, one British, one American; one a cynical world-weary journalist, the other a bright-eyed scientist; both losing or having lost faith with their fathers and their God and the implications. I wanted it to be, if not a thriller then at least with a good driving plot and with something that is in the news currently.

Somewhere along the way I decided that I would need to invent my own Church – The Church of Science and Development – an evangelical Christian sect with its very own theology (some of which I wrote and will appear in the back of the book). I wanted the news worthy subject to be controversial and chose the ProLife and ethical debate around using the discarded human embryos left over from IVF treatment in researching cures for common ills.

I steeped myself in DNA and Genomes and haplography and mitochondria and Cohenism and induced Pluripotent Stem Cells and the Dickey-Wicker amendment and the various ever-changing executive orders of the Presidents since Clinton around Federal funds for creating lines of stem cells for research.

And I wrote the book. Today I am about 75 pages out of 375 from my own final edit. I have some brilliant beta readers also having a final look and here comes the thought (after the ramble).

I set myself three serious handicaps in writing this thing.

1. I am no scientist so my research on genetics, while fascinating, is rudimentary

2. I have put my Church in the fictional town of Beaumont in Oklahoma. I have never been to Oklahoma. The other American cities involved – New York and San Francisco – I have visited upwards of five times each so I have a reasonable feel for how they work. But Oklahoma is as familiar to me as the back of my neck. Except I’ve never scratched Oklahoma.

3. Part of the action and  a significant area of the plot involves Nicaragua (I hear you, folks – Why do this to yourself?) I needed one of the fathers, in this case the head of the Church, to have gone on a mission in his youth to somewhere preferably war-torn. Nicaragua stood out given the timing. It is also an interesting melting pot with the Meso-Indian tribes when considering the genetic history of its peoples.

I did my research online. I did a lot. I was quite pleased but… it nagged. I’d not spoken to anyone from either place for 2 and 3 and I was pretty sure my knowledge of genetics would have, within it, some pretty awful holes. I could have shrugged, let it go. I’d done all I could short of a lot of traveling.

But luck has a a habit of helping. The Vet is a scientist; a lot of her school friends are scientists. Two have done degrees in Biology with significant genetic components. These lovely youngsters read God Bothering and gave me amazing feedback (and most of the things I got wrong they both pointed out so at least I was pretty sure they were right!). But mostly they loved the book, gripped to the end. Tick.

The Lawyer has a lovely girlfriend, the Beautician of these pages who has a fascinating family background (what’s not to like about having a Zoroastrian branch who were persecuted out of Persia in the family tree?). She also has an uncle and aunt who live in Nicaragua. I found that out this summer and said aunt is now reading GB. I’m hopeful she will not have too much bad to say about it!

And blogging, which I started in April last year has opened the door to so many contacts who have become e-friends (and real friends too). Through this blog I’ve been lucky enough to be introduced to an Oklahoman by birth who is well versed in evangelical theologies from her youth. She too is reading the manuscript and, again, I hope the outcome will not be too negative! But see, even if it is, I still have a choice. Several. But I’m not going there yet.

The big question is: Is research necessary? I think yes but it needs some grounding. Some authors feel they have to live the story, be physically present in every part. Others eschew research, doing the barest minimum to be credible and letting the nerdy critics’ words wash over them. Graham Swift, who wrote the brilliant Booker Prize winning Last Orders has said,

“I don’t research […] It’s a great destroyer of the imagination.”

So have I done enough? Yes, probably. Could I have done more? Of course. Where do you draw the line. Easy – where you are comfortable. And where is that? Hmm, a writer’s lot is to be perennially uncomfortable. I think I will have to keep squirming and move on. I’ll be interested to know what you think from this brief description

I have a cover, created by a friend of the Lawyer who is just starting out in his own graphic design business. Honest opinions only please. Personally I think it is a marvel…. 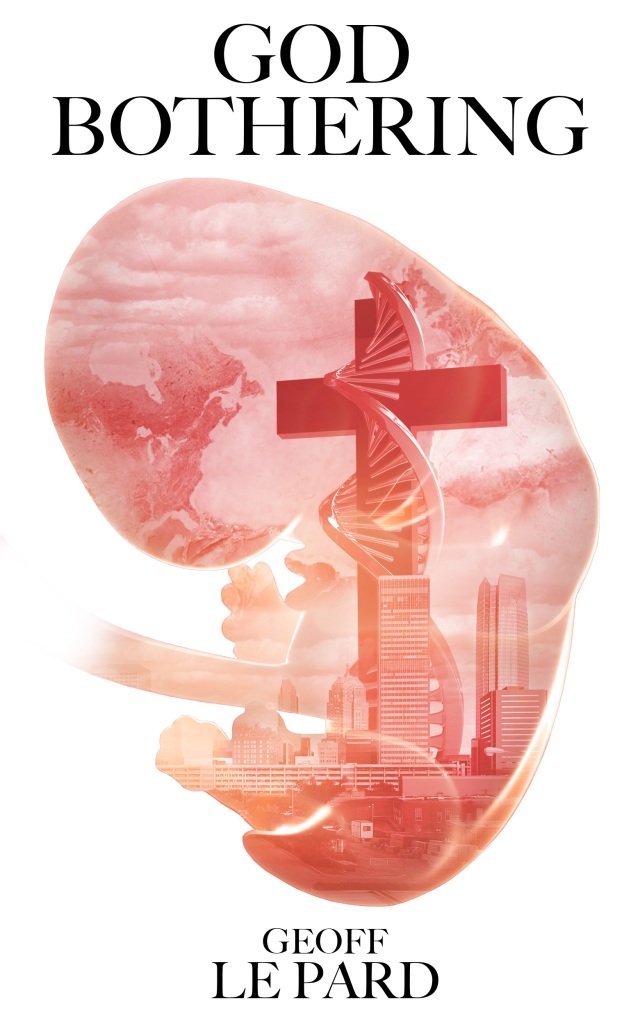 My name is Geoff Le Pard. Once I was a lawyer; now I am a writer. I've published four books - Dead Flies and Sherry Trifle, My Father and Other Liars, Salisbury Square and Buster & Moo. In addition I have published three anthologies of short stories and a memoir of my mother. More will appear soon. I will try and continue to blog regularly at geofflepard.com about whatever takes my fancy. I hope it does yours too. These are my thoughts and no one else is to blame. If you want to nab anything I post, please acknowledge where it came from.
View all posts by TanGental →
This entry was posted in literature, miscellany, writing and tagged book, book covers, genetics, God Bothering, indie publishing, publishing, research, riting. Bookmark the permalink.

31 Responses to A thought and a favour