The Amateur Reviewer: crime and mystery 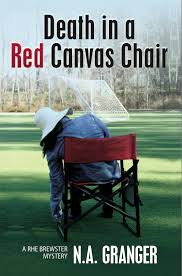 Death In A Red Canvas Chair

The protagonist is Rhe Brewster, mom, wife, resident of Pequod in coastal Maine and works at the local hospital. She also happens to have a penchant for solving crimes. We learn early she has a track record in this last area with her efforts to solve some hospital robberies. We are given a hint as to how this will be relevant when the person disposing of the body in the eponymous canvas chair shares this thought in the prologue (the first body is delivered to the soccer field while Rhe and other soccer moms are spectating).

God, I hope she finds it. Bust even if she doesn’t, I know she’ll get involved. She’ll find the killer.

We aren’t told who ‘she’ is but it doesn’t take much detective work to sort that out! Who the thinker of the thought is, well that takes a while longer.

This is a neat opening, especially when the spectators only realise their fellow spectator, seemingly comfortably dozing in their chair dozing, is in fact dead because of the appalling smell.

One of the difficulties you often find with crime novels where the protagonist is not a member of the police services or very directly related to the deceased is the credibility with which they are allowed into the inner circle of the investigation. Here Rhe’s brother in law is the local police chief which helps assist the transition and when the force starts to be overwhelmed her part time secondment seals the deal.

This is a page turner and for most of the book you are pulled along. Once or twice towards the end you wonder at the credibility of Rhe’s escapes but no more so than in nearly every crime story I’ve read that builds the tension to a delicious climax.

And the climax (or climaxs since Granger keeps us guessing when we think we’ve reached the end) are well played out. In the best way I wanted the book to end while wanting it to go on.

The other failing is often making the baddies too bad and the goodies too good. Certainly that isn’t so here. The heroine is far from perfect. In fact she is in many ways very selfish, taking risks she wasn’t trained to deal with. It seems on the surface she has a contented life but  that is far from being so – it feels like a sort of Revolutionary Road suburban ideal updated to now, with bubbling tensions beneath the surface.  I had so much sympathy with her long suffering husband. He is given his own flaws but they barely counterbalance Rhe’s. That may just be some unreconstructed male prejudice on my part (guilty, your honour), but anyway who wants someone without flaws?

It must also be noted that throughout Granger lets us see some flashes of nice humour. When explaining her unusual Christian name Rhe tells us:

[I]t was given to me because my mother thought[it] sounded exotic. Her name is Storm and my sisters Summer and Sage so go figure.

This is a book that deserves a wider airing. If you enjoy your crime pacey and grounded in a real sense of place and character this is one for you. I assume there will be a second which I am looking forward to (and this time I hope the Hub gets a better deal!) Well done Noelle!

You can find Death in A Red Canvas Chair here for the UK and here in the US. And Noelle’s fascinating blog (who knew I’d be blogging with the entomologist for Silence of the Lams!) here.

My name is Geoff Le Pard. Once I was a lawyer; now I am a writer. I've published several books: a four book series following Harry Spittle as he grows from hapless student to hapless partner in a London law firm; four others in different genres; a book of poetry; four anthologies of short fiction; and a memoir of my mother. I have several more in the pipeline. I have been blogging regularly since 2014, on topic as diverse as: poetry based on famous poems; memories from my life; my garden; my dog; a whole variety of short fiction; my attempts at baking and food; travel and the consequent disasters; theatre, film and book reviews; and the occasional thought piece. Mostly it is whatever takes my fancy. I avoid politics, mostly, and religion, always. I don't mean to upset anyone but if I do, well, sorry and I suggest you go elsewhere. These are my thoughts and no one else is to blame. If you want to nab anything I post, please acknowledge where it came from.
View all posts by TanGental →
This entry was posted in literature, miscellany, reading and tagged Book review, Death in a Red canvas Chair, Noelle Granger, Rhe brewster. Bookmark the permalink.

4 Responses to The Amateur Reviewer: crime and mystery