Where once there was a tower, now Christchurch Cathedral is open only to hope.

Christchurch. That title could be just as easily

tears: (n) watery droplet secreted from the eye socket; or

tears: (n) rips in the fabric.

We drove down to Christchurch after breakfast in improving weather allowing views of the Pacific and small crunching rollers stirring up the dark sand, the most obvious sign of volcanic and seismic activity. Nothing untoward and nothing obviously out of place.

Overnight we stayed in another delightful B&B, the Nikau Lodge,  in Kaikoura, north of Christchurch. A room with a magnificent view down to the coast. Kiakoura was perfectly charming and in Hislops it had an unexpected gem – an organic restaurant with its own range of juices – being teetotal this means a change from water and the beetroot and carrot was delicious.

Feeling mellow, it was only after dinner that I thought to check the arrangements for meeting friends the next evening in Christchurch. With a light heart I opened the email; with a heavy heart I read the date. Sunday 7th. I rubbed my eyes. We were meant to meet on the 8th. Surely. Not the 7th. I triple checked but according to the email exchange we should have been collected from our Christchurch hotel by the time I was reading the emails, not be sitting 150 km north in a comfy B&B. I called, left a message – a high quality grovel though I say it myself – texted and emailed. Odd that there was no evidence they had checked on our absence. A small sliver of hope. Dick head tours was once again alive and well with me in charge. Had I really got the date wrong? I went to bed with a degree of anxiety and a lot of annoyance.

When we arrived in Christchurch, cruising through leafy suburbs there was nothing untoward. A few small building projects but nothing unusual. Our hotel, opposite the park and the Avon River looked perfectly fine if a little bland out front. Inside it was all state of the art. We had been upgraded to a suite with his and his showers,

And swipe switches for everything (except the bedside lights that took an age to figure out). All rather comfy and cool.

It being oneish we set off to explore, grabbing a map on the way. Victoria street said it was home to cafes and shops so we headed east. Apart from a beautiful clock tower with a telling sign explaining its restoration post February 2011 (see below for some more info on the earthquake) all was, seemingly, normal. Suburban villas and small shops. Disappointed that there was nowhere to eat we turned South for the centre. We hadn’t gone far before the fenced off buildings and empty plots given over to sad lonely cars as temporary car parks grew in number.

Sadly an increasingly common sight as we approached the centre

some effort to cheer up what is otherwise a depressingly familiar sight: cleared building plots awaiting an uncertain future

City art – murals and sculptures and installations highlighted the increasing evidence of an unrestored city. 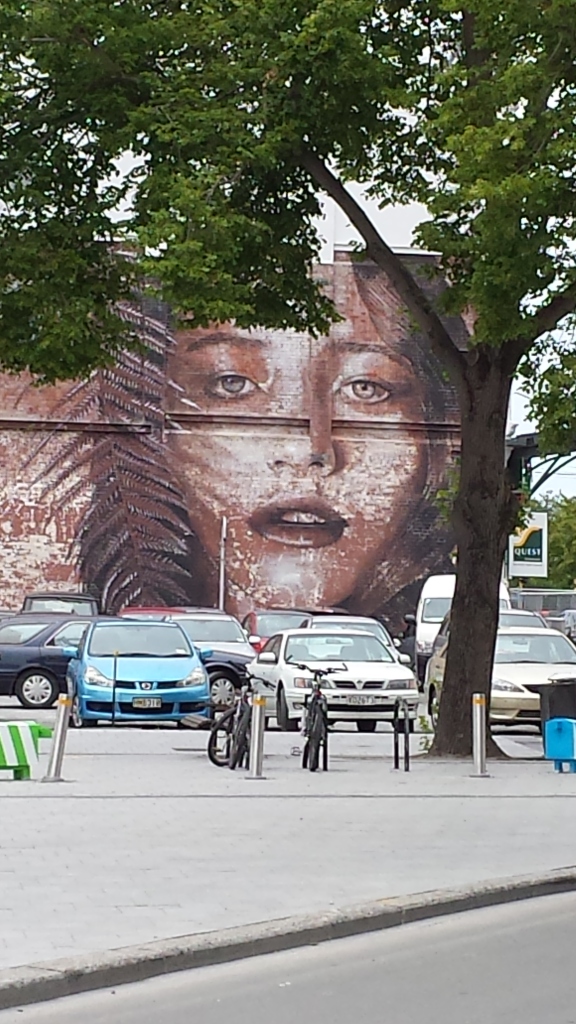 A face devoid of emotion, much like Christchurch at the moment. Numb, but not comfortably so.

A dying swan or a rebirth; every image is capable of multiple interpretations just now 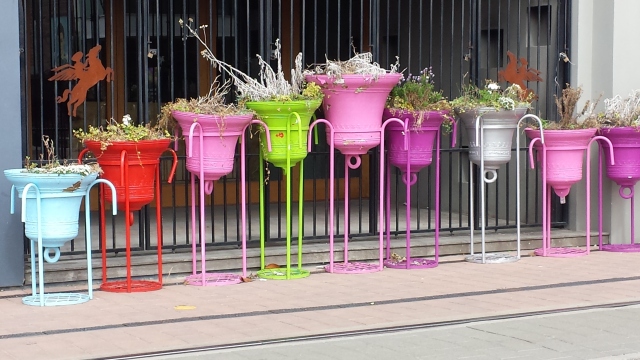 Have the bells tolled or do they still toll? 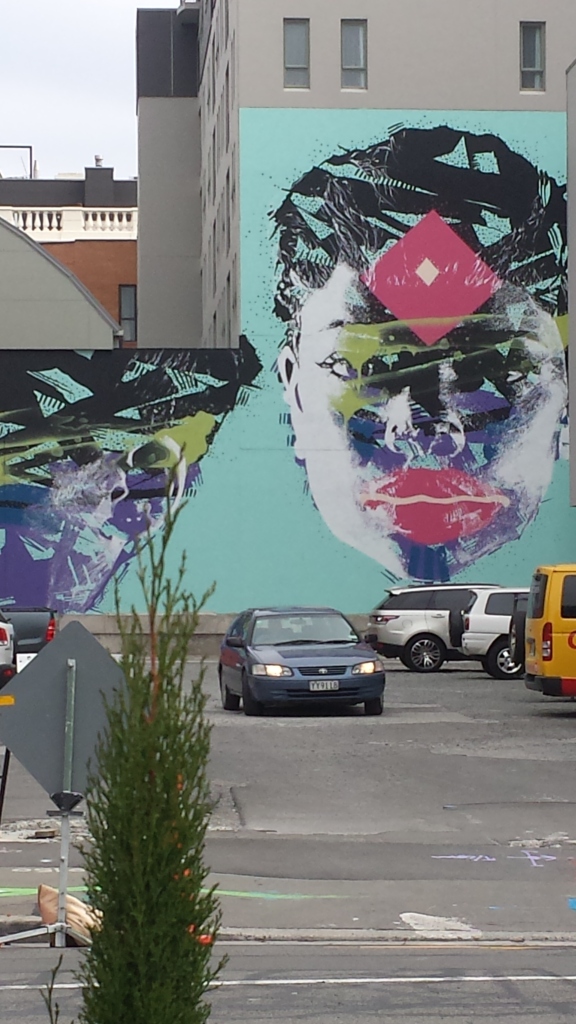 I haven’t been to a war zone. I remember parts of London still unbuilt in in the 70s thirty years after the Blitz but nothing like this. Nothing on this scale. Never a city with its centre, its civic soul ripped out. Everywhere the crump of mechanical diggers, the coned off streets, the praying cranes, the prison wire keeping the nosey out, protecting from a future yet to be decided, giving glimpses of the past, the buildings yet to be demolished.

Some new buildings have gone up, some old ones have survived and are in use.

there was a great steam punk café here; my kind of town

A lot is scheduled to go still. It is not Damascus or Mosul. There are no more beggars and signs of the cruelly dispossessed here than in any major western city and yet you weep for a city with its guts ripped out.

My mind instantly cast back to Napier, to those grainy black and white photos of the destruction wrought there by the 1931 earthquake and the beauty of the restored town. Mostly it was new buildings then and no doubt some were controversial. Certainly the process of restoration is controversial here. And it is 3.5 years after the event – well, as I learnt, the series of events as shocks and after shocks rippled a sequence of destruction through Christchurch. Napier rebuilt in 2.5 years, albeit on a smaller scale and back then there were no meaningful planing laws and there was benign dictatorship that civil society doesn’t accept today. Even so the progress here must seem glacial at time to the residents.

Standing out as a beacon of hope but equally a source of immense frustration and division is the question of the cathedral.

A beacon of hope? A funnel draining it away?

We met two dear ladies who are leading a campaign against the Anglican Bishop of Christchurch. Our two are campaigning for a full restoration; the Bishop wants something wholly new. Passions are enflamed and stasis results. So sad. Me, I’m with the restoration of the old; there will be enough new to satisfy any modernist.

In June 1870, Charles Dickins died. Samuel Fildes drew a sketch entitled ‘The Empty Chair’ which appeared in The Graphic. Van Gogh interpreted the image and subsequent tragedies have seen the image of the empty chair used: Oklahoma’s bombing and at the first anniversary of 9/11. This is such a powerful image and Christchurch has adopted their own take on this well worn theme.

Most touching here were those for the children. 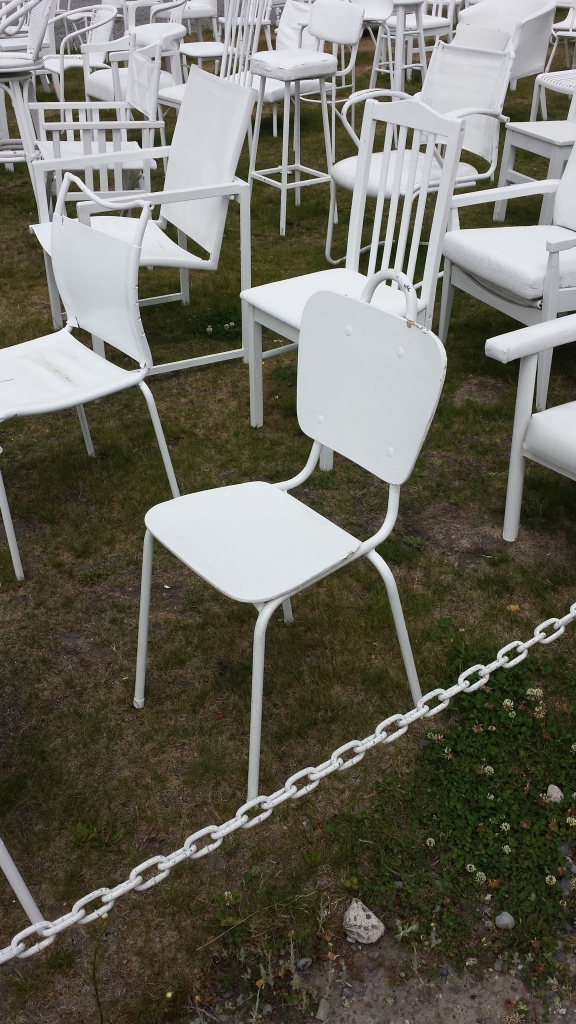 I found it almost too much.

The original quake, or so most seismologists believe was in September 2010 and measured more than 7 on the Richter scale, a big one but as it centred some distance from Christchurch there was some property and infrastructure damage but one death, and that a heart attack that might have had a different cause. The February quake was probably an aftershock (there have been in excess of 11,000 recorded); 6.3 on the scale. It wasn’t the biggest earthquake on the Richter scale but, to my shame I didn’t realise there are other factors in play. The speed of the fracture (Peak Ground Acceleration) and how close to the surface can determine how destructive it is. The speed and the fact it was moving vertically caused the damage and the death. To quote wiki

The force of the quake was “statistically unlikely” to occur more than once in 1000 years, according to one seismic engineer, with a PGA greater than many modern buildings were designed to withstand. New Zealand building codes require a building with a 50-year design life to withstand predicted loads of a 500-year event; initial reports by GNS Science (the NZ Crown Research Institute) suggest ground motion “considerably exceeded even 2500-year design motions”, beyond maximum considered events (MCE).

And yet, you know what, the people we met, in shops, in the information centre, in the cabs, in the hotel – they were doing what people do. They were getting on with it. They were happy we had come; they need visitors, they need to be remembered. What they don’t need is my pity.

‘Facing it, always facing it, that’s the way to get through. Face it.’ per Joseph Conrad.

The people of Christchurch are facing this together and it is admirable.

After a tram ride and a walk around the serene botanical gardens, 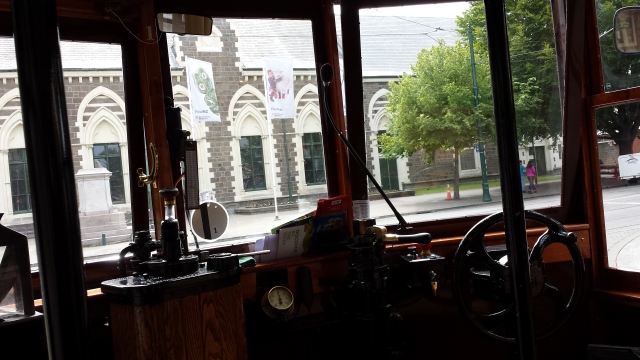 I decided to drop the car off as we were caching the train in the morning. When I got back to our hotel, my old friend, the Kiwi Lawyer was waiting for me. He had been held up by a flooded river and was dreading letting us down by not being around for dinner on the Sunday. So my apology came as a great relief. Sometimes good comes in unexpected ways. I really hope that is true for Christchurch.

My name is Geoff Le Pard. Once I was a lawyer; now I am a writer. I've published several books: a four book series following Harry Spittle as he grows from hapless student to hapless partner in a London law firm; four others in different genres; a book of poetry; four anthologies of short fiction; and a memoir of my mother. I have several more in the pipeline. I have been blogging regularly since 2014, on topic as diverse as: poetry based on famous poems; memories from my life; my garden; my dog; a whole variety of short fiction; my attempts at baking and food; travel and the consequent disasters; theatre, film and book reviews; and the occasional thought piece. Mostly it is whatever takes my fancy. I avoid politics, mostly, and religion, always. I don't mean to upset anyone but if I do, well, sorry and I suggest you go elsewhere. These are my thoughts and no one else is to blame. If you want to nab anything I post, please acknowledge where it came from.
View all posts by TanGental →
This entry was posted in miscellany, New Zealand, street art and tagged Christchurch, Christchurch cathedral, Earthquake, George Christchurch, Hislops Kiakoura, Kiakoura, New Zealand, Nikau lodge, Richter scale, Street Art. Bookmark the permalink.

14 Responses to Kia Ora day thirteen – tears for a town.