What on earth does that title mean (apart from the author is getting stuck up the wrong orifice)? A mouthy inspiration? A small succulent morsel of an idea that foreshadows a great feast. Like any writer we need our muse bouches to tempt us to, or back to, the page and set us on our way. 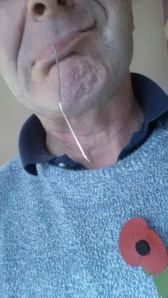 I did a short writing course way back when I was first toying with the idea I might write a book. One exercise was to take a body part and use it as an inspiration for some stream of consciousness writing. I chose the mouth. I recounted a story that happened in an interview where I was one of a panel of three interviewers. The candidate had been shown into the interview room to wait while we three had a quick pre-discussion on what we wanted to ask and who would ask it. The interview room was pretty bare though on the table was a stationary tray with some small notepads, pencils and miscellaneous bits and pieces. The candidate was nervous, understandably and, it seems in need of something with which to fiddle away his nerves. His gaze alighted on a paperclip which he proceeded to unwind. Not content with straightening out the wire he then attacked some plaque between his front teeth. Sadly the wire stuck – a little kink remained and he was still yanking to remove it when we entered. We were surprised that he offered us a hand to shake while the other covered his mouth. Was he suffering from a cold and, politely, sought to keep the germs to himself? Had he some awful deformity he was embarrassed to show us. Was a festering belch about the erupt? A droplet of blood splashed on his crisp white shirt. Then three more. With an animalesque howl, much muffled as it was, he ran out to find the gents. He didn’t get the job.

My muse is my father’s desk which I have decorated (see here, if you missed the post). I sit and write and imagine him perched on a tall stool looking over my shoulder, a pint of Ringwood Ale in one hand (pint mug with a handle, not a sleeve) and one of Mum’s scones (cream and jam too) in the other saying ‘Crap, boy’ or ‘I suppose, if you must…’ or ‘For god’s sake that’s a preposition; what’s it doing there?’ And in my head I tell him to **** off and we smile at each other and each other going.

This week, for Charli’s latest prompt,

In 99 words (no more, no less) write a story inspired by your muse. It can be about a muse, about longing for a muse or being thwarted by a muse. It can be serious or a-musing. It can be prose or poetic. Whatever you and your muse agree upon,

Mary needs a muse for her search but can she find one? Read on (and this is the link to the previous instalments if you need a refresher)

The beat of a butterfly’s wing

Peter the dog dropped the ball at Mary’s feet. Mary smiled. “It was your predecessor that started this, you know.”

The dog wagged his tail. When would she throw it?

“Him dying, dad’s heart. That kick started all this.”

One silly mistake, not leaving the car window open, had unleashed chaos.

Mary hurled the ball as far as she could. She knew it would come back to her. The ball was hers to control now. Only she could bring order. While Peter searched in the grass she pulled out the copy email. Her birth certificate. The hunt was on.

My name is Geoff Le Pard. Once I was a lawyer; now I am a writer. I've published four books - Dead Flies and Sherry Trifle, My Father and Other Liars, Salisbury Square and Buster & Moo. In addition I have published three anthologies of short stories and a memoir of my mother. More will appear soon. I will try and continue to blog regularly at geofflepard.com about whatever takes my fancy. I hope it does yours too. These are my thoughts and no one else is to blame. If you want to nab anything I post, please acknowledge where it came from.
View all posts by TanGental →
This entry was posted in flash fiction, writing and tagged Charli Mills, flash, flash fiction, muse, writing. Bookmark the permalink.

9 Responses to A muse bouche