There has been a delay to part three of the tour for which I apologise but here, for those who have patiently followed this far is the concluding part.

Parts one and two can be found here and here.  We have reached Lordship Lane on the tour and, after a brief detour to Crystal Palace Road we head for Peckham.

First a little on Peckham. Peckham has had a bad rap over the last few decades. While Brixton was the South London poster boy for racial tension and protest in the 70s to 90s it is now officially trendy with Brixton Village, a foodie heaven, San Marino cafe and the best chai lattes I have ever tasted, the Ritzy Cinema and the recently opened Black Cultural Archive – worth a visit. But Peckham, what’s its moniker? Murder, stabbing, an architect designed library that causes as much dissention as harmony and some of the worst headlines from the 2011 riots. But that is unfair. Sure it remains gritty. It is slap in the midst of one of the chain of deprived London Boroughs that circle the flaunted affluence of the Cities of London and Westminster after all. This quote sums up the general view –

North Peckham was heavily redeveloped in the 1960s, consisting mainly of high-rise flats to rehouse people from dilapidated old houses. It was popular on its completion for offering a high quality and modern standing of living. However, high unemployment and a lack of economic opportunities led to urban decay and a period of decline in the late 1970s. The North Peckham Estate became one of the most deprived residential areas in Western Europe. Vandalism, graffiti, arson attacks, burglaries, robberies and muggings were commonplace, and the area became an archetypal London sink estate.

The ghettos of the North Peckham housing estates have largely disappeared thanks to large redevelopment grants and wile the riots testify to an underlying tension, it is clawing its way up. It is as ethically diverse as it comes (this was the 2001 census and while the ingredients may have changed the variety hasn’t):

Today it is a mix, a melting pot and just right for street art. In Bellenden Road you have the Lordship Lane of tomorrow. If you want an example try Melange, a French chocolatier which holds excellent classes on truffle making.  And it is home to some of the best of the street art. There is a way to go to get the balance right in Peckham but the aspirational classes of all colours, creeds and religions are moving in, pushed out of Dulwich and Camberwell by the prices and they, more than any government initiative will push the schools to perform better, help the local economy and gradually allow Peckham, a ten minute train ride from the city, to benefit from its proximity to the City and the Midas like wealth of the most selfish piece of Britain.

So, enough of politics. To the tour.

1. I branched off Lordship Lane along North Cross road. The Blue Mountain café is worth a visit as is the Thai Corner where you bring your own booze. There is also an old fashioned sweet shop and other boutiques if that is young thing. Turn right by the pub (The Actress) (and not left as the map – here – suggests) and head for the school at 141 Crystal Palace Road. The art is on the playground wall so you need to look behind you or you’ll miss it. It is by Ligen and not based on any baroque art.

2. About turn and head north to East Dulwich Road. The tour takes you left, back towards Lordship Lane but first cross the road and head for flank wall of the buildings that bound Goose Green. There’s a mural there worth a look. It isn’t part of the tour but is a fascinating example of the genre. it celebrates William Blake’s vision of angels in an oak tree in Peckham. One man wanted to g0 further – here.

3. Back on the tour you look out for Spurling Road opposite the East Dulwich Tavern. There you will find a massive Conor Harrington filling the walls of a house. His work reflects the turbulent regency period when the Dulwich Picture Gallery was built.

4. Ahead is Grove Vale that curves left past a school and a parade of shops to East Dulwich Station at the bottom of the delightfully named Dog Kennel Hill. On the way there ybou are asked to hunt for another Delgardo, a paste up on wall and pavement at the junction between Grove Vale and Coppleston Road. 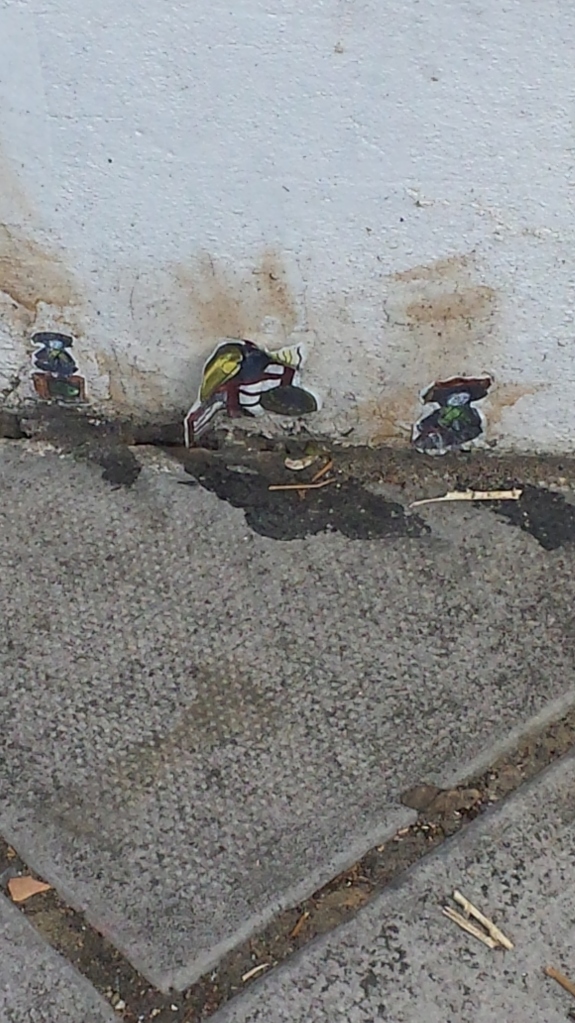 All I found was a tiny residue so Dog and I crossed the road to the Blackbird Bakery. This chain has become quite ubiquitous in South London and while it suffers a little from expansion it still produces a good range of bread, decent coffee, brownies to, if not die for, then donate a body part to medical research and packets of good hopefully wholesome muesli.  Full of a decent quiche we continued to the station and the junction with Vale End. Once more the art is on the flank you can’t see so take care to look back or you will miss it. This one is by Remi Rough and System and is based on Girl at a Window by Rembrandt van Rijn and The Triumph of David By Nicholas Poussin.  I think this is great.

5. The easy route is to continue up Vale End into Coppleston Road and then to Bellenden Road. You need to walk to the far end where two pieces of art are nearby. There are plenty of good eateries hereabout. But I was full so bought some of the excellent chocolate at Melange for later and headed for the art. First up is probably the biggest piece so far by Walter Kershaw. His work takes its inspiration from Landscape with Windmills near Haarlem by Jacob van Ruisdael. This was copied by Constable. I could have spent an age taking in this one. Look at how the colour of Kershaw’s sky merges into the real thing.

6. Just across the way, on the Victoria pub is the first ROA I came across. I love ROA and this was no different. It’s like the little strips that make up the picture  might fly away at any moment.  His inspiration is Landscape with sportsmen and game by Nicholas Pynacker and Halt of a Hunting Party by Philips Wouwerman.

7. This walk had just clocked 7 miles and I could have done with some tea. Instead I had to cut through the middle of Peckham to 197 Consort Road. This one, by Faith, was a bit of a flat end to the tour. The idea comes from Europa and the Bull by Guido Remi. Tick.

For those visiting it is easy to walk to either Peckham Rye or Nunhead and head to either Victoria or London Bridge. And a well earned rest! Thank you for joining me. If you know of anything similar in the UK or elsewhere I’m always on the lookout for similar tours.

My name is Geoff Le Pard. Once I was a lawyer; now I am a writer. I've published four books - Dead Flies and Sherry Trifle, My Father and Other Liars, Salisbury Square and Buster & Moo. In addition I have published three anthologies of short stories and a memoir of my mother. More will appear soon. I will try and continue to blog regularly at geofflepard.com about whatever takes my fancy. I hope it does yours too. These are my thoughts and no one else is to blame. If you want to nab anything I post, please acknowledge where it came from.
View all posts by TanGental →
This entry was posted in art, Dulwich, London, politics, sculpture, street art and tagged Blackbird Bakery, blue mountain cafe, conor harrington, Coppleston, Delgardo, Faith, Kershaw, Ligen, London, melange, Peckham, remi rough, Roa, Street Art, system, thai corner cafe, william blake angels in peckham. Bookmark the permalink.