William Dyson, Willie to his family, was born at the back end of the 19th Century into a reasonably comfortable family in Linton, in Cambridgeshire. He had two brothers, Allen and Edward and three sisters Mabel (Mabs), Gladys (Glad) and Vera. I know little about him  beyond those bare facts. Was he destined to farm, to work in a bank, or a shop or the post office, as his brother in law did? Did he have a sweetheart? Indeed I know little of the brothers. His sisters have painted on a bigger canvas. Glad married her sweetheart and moved to Northamptonshire when he set up a tailoring business while Mabs was postmistress and, with Vee, stayed in Linton. He doted on them as this card to Gladys in 1910 shows.

Like so many young men, he volunteered in 1914 to join the masses going to France and Belgium to stop the ‘Hun’. In Willie’s case, however, it wasn’t as part of the bellicose fighting forces but in the Royal Army Medical Corps as a stretcher bearer and ambulance driver. This probably stemmed from his convictions as  a staunch member of chapel – at least that’s how Gladys told it.

Here she is, as a nurse. 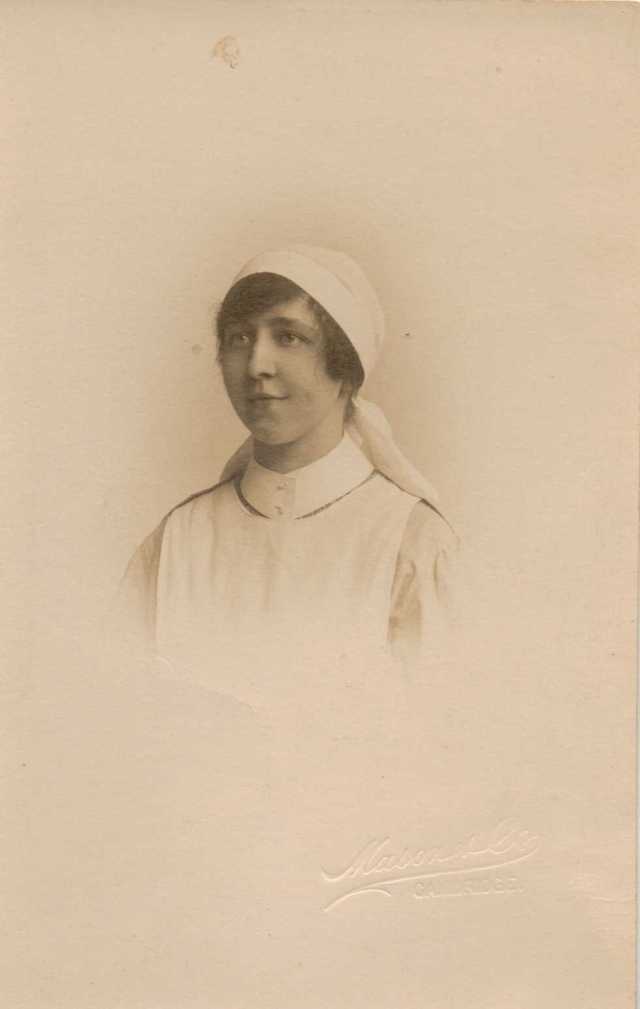 He was no poet, no great philosopher but a kind, probably gentle man who wrote to his baby sister Vera while in training and in France. Here are a couple of his letters.

On 29th May 1917 Willie was involved in the Battle of Arras. Under heavy fire he rescued a number of his comrades and for his conspicuous bravery was awarded the Military Medal. 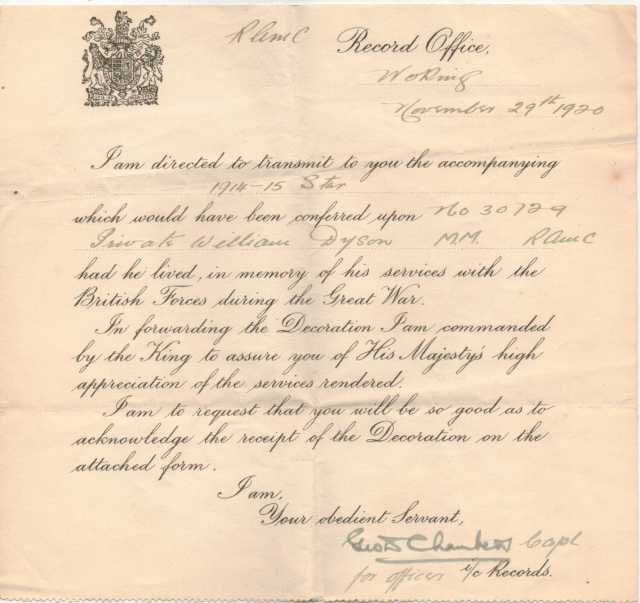 The next day, Willie died in Base Hospital of a cerebral haemorrhage, probably as a result of some injury sustained during the battle. 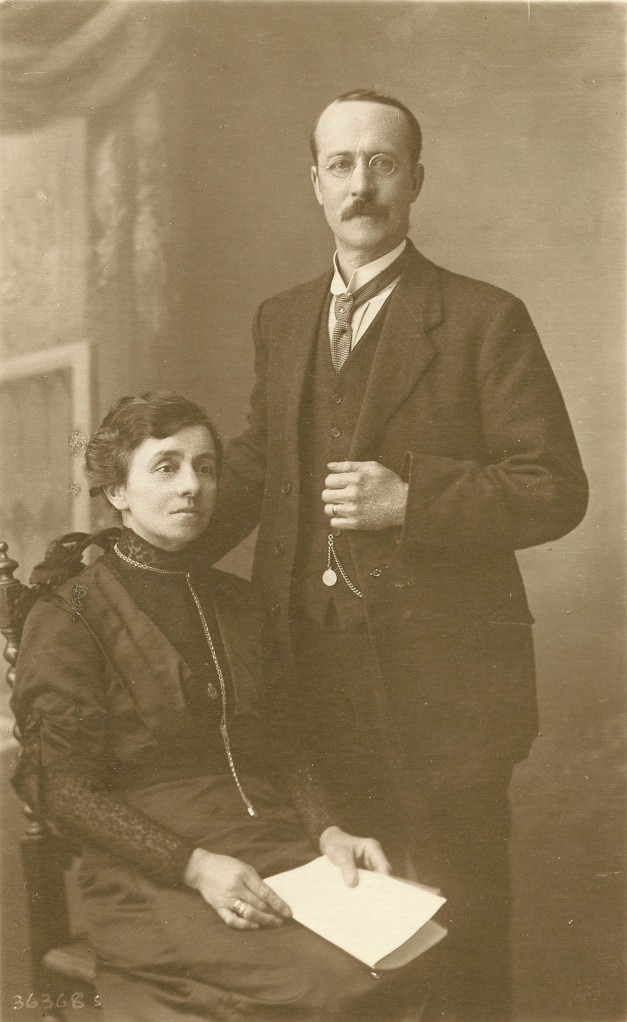 The story is told that his parents received news of both is death and his bravery in the same post. I can’t begin to imagine the impact that might have had. A young life, he was 21, snuffed out like so many.

He is buried here

The war graves commission still tends the grave to this day.

and today… with smart new headstone

The village, like so many, raised the funds for a memorial and his name was inscribed with two other Dysons, relatives I surmise.

Gladys, as with her sisters, adored their Willie and spoke about him with deep affection. She wore a sweetheart broach he gave her through her long life.

On the 27th September, as part of the remembrance of that ghastly war, William Harding Dyson’s  name was read out in the moat of the Tower of London where a ceramic poppy is being planted for every commonwealth victim of that conflict; the ceremony takes place each evening at sunset and will continue until 11th November 2014 when the moat will be filled with the poppies. It is a moving tribute to all who died during that war. 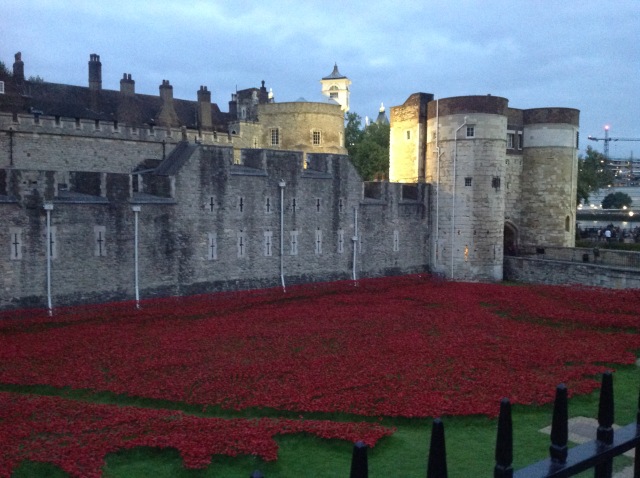 just before the ceremony 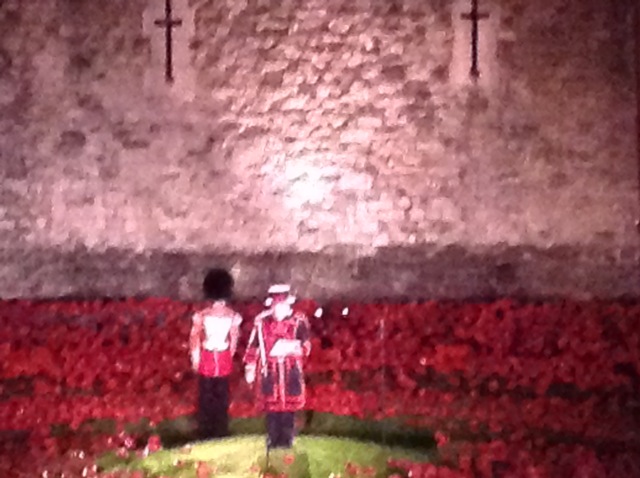 the names being read 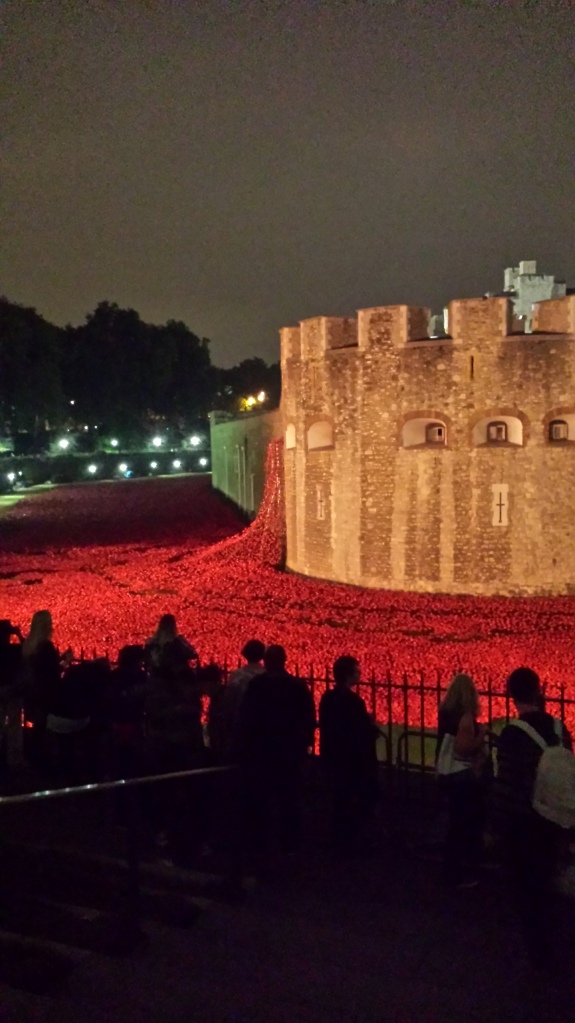 like blood flowing out of the veins of the castle 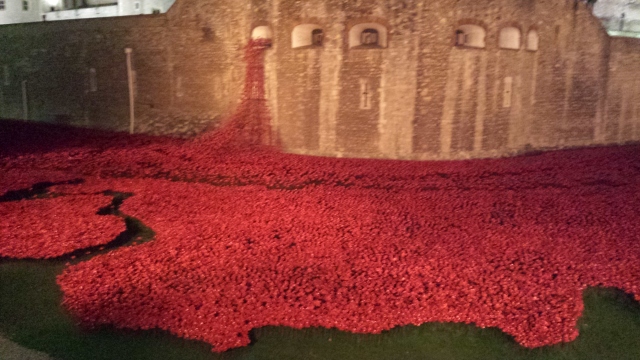 it is so moving

And when the last post played it was difficult to keep  in check emotions I didn’t realise I had for someone I never knew and only heard about while  playing games with my grandma, Gladys Le Pard, nee Dyson. Willie Dyson was my great uncle and I’m proud he was.

This post is a family collaboration. My brother, the Archaeologist of these pages, provided me with the source material. The errors and omissions however are all mine. If you have the chance to watch the Antiques Roadshow in November he will appear to talk about my maternal Grandfather and a small Joan of Arc statuette. Perhaps I will be able to persuade him to guest post on that.

My name is Geoff Le Pard. Once I was a lawyer; now I am a writer. I've published four books - Dead Flies and Sherry Trifle, My Father and Other Liars, Salisbury Square and Buster & Moo. In addition I have published three anthologies of short stories and a memoir of my mother. More will appear soon. I will try and continue to blog regularly at geofflepard.com about whatever takes my fancy. I hope it does yours too. These are my thoughts and no one else is to blame. If you want to nab anything I post, please acknowledge where it came from.
View all posts by TanGental →
This entry was posted in families, memoires, miscellany and tagged Battle of Arras, Linton, Military Medal, Poppies, RAMC, Tower of London, William Harding Dyson. Bookmark the permalink.