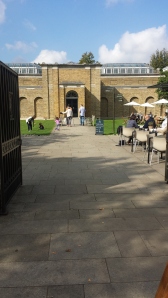 Dulwich Picture Gallery, main entrance. Loads of parking nearby, both on the roads (College Road and Gallery Road) and in the park (gates opposite) 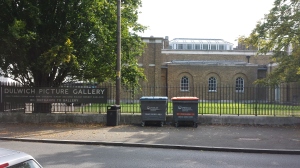 I started writing this post, intending to cover the complete Dulwich Street Art tour in one but I have realised this needs to be broken into two or three separate posts. This, therefore is post one. The rest will follow shortly.

The Dulwich picture gallery is, apparently, the world’s first purpose-built public art gallery, built in 1817 by Sir John Soane, who was also responsible for the Bank of England. I’m fortunate to live a mile from its front door. It is in the middle of Dulwich village, 5 miles from the centre of London and part of a green and cultured oasis. All of which rather suggests a collection of Tweed wearing,  Telegraph reading oldies – fusty and set in their ways. The gallery has done its best to temper this image with some recent exhibitions but since it was built to house a collection of Old masters and is more famous for  the Baroque than Brit Art, it is difficult to shift the typecasting.

Last year, however, in May 2013 and as part of the Dulwich festival the gallery commissioned some of the biggest names in street art to reinterpret some of its paintings on the walls, lamp-posts and pavements of Dulwich and Peckham and thus to create a vibrant outdoor gallery.

I’ve already written about street art in London and it is becoming something of a passion. It combines my love of walking with my delight in my city and adds to the mix the indescribable joy (ok, that’s a bit o.t.t. – a tingle of satisfaction) that comes when I find art in unexpected places. It always brightens my day to imagine the artist taking a drab, utilitarian flank wall and making it rapturous (here we go again – typical blather).

Anyway, I’ve had the interactive map that I’ve linked above on my ipad for a while, wanting to find the moment to use it, to see which of these commissions remains intact. Street art is intended to be ephemeral, to be painted over though I suspected these works would be treasured. Or would they? Which would survive and which would have gone? I was in for some surprises.

The Textiliste is the real art lover and a fellow walker of some commitment. Dog likes walks. He’s not big on art, to be fair. He did try and pee on a Delgardo which I thought might in fact be a fair comment on some street art (though not Delgardo’s). I had no idea how long the tour might take, how far indeed it might be. But it did occur to me that others might come across this post and want to follow it so I will try and explain what we did, where we went and the options open to the potential Street Art Lover.

First things first, I didn’t actually go this route but to make it as user friendly to the non Dulwich resident as possible, this is how I would have gone, had I come into the area specially.

1. Start at Gipsy Hill rail station. First, there are trains from London Bridge and Victoria (about 25 minutes each) and second there is an outlet of Brown and Green’s café, a local business run by twin sisters and capable of providing the greatest bacon baps in South London. Left out of the station, down the hill to the Paxton. On the side is a mural by Reka based on Europa and the Bull by Guido Reni.

2. From here you continue to Alleyn Park and head north. At the Alleyns’ Head pub, go right ahead down the path alongside the railway line until you reach West Dulwich station. If you want to cut out the mile walk from the Paxton, catch the number 3 bus to the end of South Croxted road. Either at the bus stop or the station head east along the south circular under the railway bridge. Immediately under the bridge on your right is a lovely little community project run by Vinnie, called New Leaf. Do stop and chat if they are open. If not have a look at the murals that Vinnie commissioned of some of his favourite scientists and botanists. See how many you can name. Just don’t mention Watson and Crick. 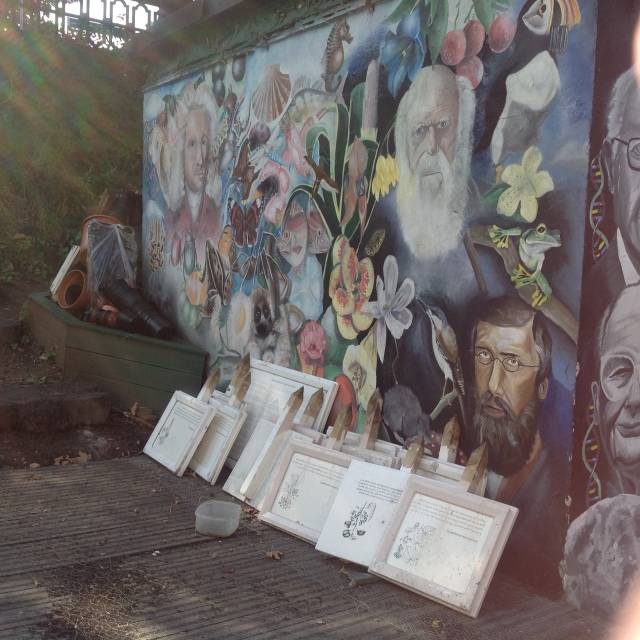 3. Cross the road and enter Belair park by the gates next to the tennis court. Immediately inside, on the practice wall is MadC and his take on a Dutch flower painting by Van Huysum; possibly this.

Mad C. This is the only work with a note next to it explaining its genesis. Only a flimsy piece of paper so it will not last.

4. Belair Park can provide food at Belair house though this might be too soon after the bacon bap and is a bit posh. There are public toilets inside the park, just before the House – usually pretty clean. Having refreshed etc, exit onto Gallery Road. You have a choice. Cut through Lover’s Walk to College Road and turn left to the Picture Gallery main entrance or continue left up Gallery Road to reach the gallery by cutting through their gardens.  Here is the first disappointment. According to the interactive map there are three works, a Patrick Delgardo and two Ben Wilsons. Ben Wilson is the chewing gum artist so, inevitably he is difficult to spot. His two items are by the bike rack, just inside the main gate by the café (first picture below – based on Saint Catherine of Sienna by Dolci ) and the second by the bench between the gate and the main entrance to the gallery based on the Judgement of Paris by Van der Werff. The Delgardo, who is a poster artist, working on a small scale, has pretty much gone – it was on the wall on Gallery road in front of the old cottage. The third picture below is of the small residue. 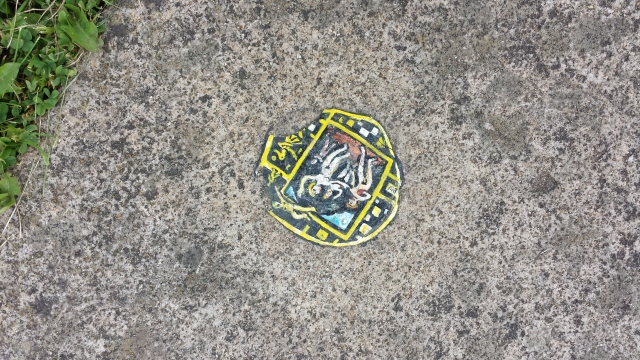 Ben Wilson no 2: apparently Ben thinks if the women are naked then so should be Paris. 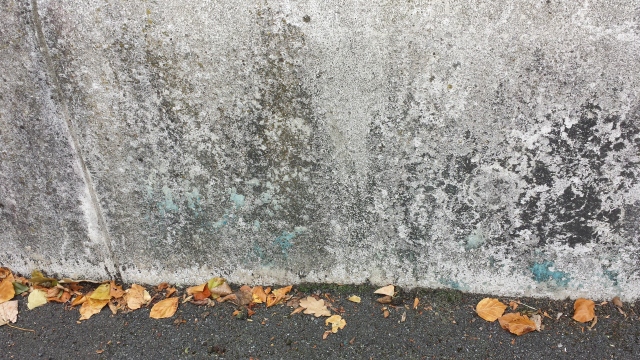 not much left of the Delgardo

5. After this little struggle to find the Wilsons the next two were easy. If you haven’t had a coffee the Picture gallery café is fine if pricy. There are toilets just inside past the café till if you need them. Refreshed head back across College Road and into Dulwich park. You need to go straight ahead when the entrance road ends by the barriers, between the shrubs and with the boating lake on your right.

I’d love to send you on a detour to see the Barbara Hepworth sculpture but it was stolen, no doubt melted down and the promised replacement has not yet appeared.

Here are a couple of photos we took before the dastardly act.

I’d like to say it is hard to understand the thief’s mentality  but there are desperate as well as greedy people in the world so maybe I should try and understand. But I can’t. BASTARDS.

The next two are on the Bowling Club house (pass by the café for now) and we come across our first Stik and a Thierry Noir. The Stik interprets Three Boys by Murillo and the Noir is Joseph receiving Pharaoh’s Ring by Tiepolo.

Stik, the first of many

Thierry Noir is famous for his art on the Berlin Wall

6. You need to circle back to the crossroads and turn right for the Court Lane gate; if this is break time the Park café do great coffee and decent bacon rolls. Their cakes are pricey though. Hidden in the shrubs to the left of the café are public toilets and these are generally in acceptable condition. Out of the gate and right onto Court Lane. The first  of four paintings in Court Lane is on 150 (the park side of the road). A Stik, which we are told (on the interactive map) interprets Elizabeth and Mary Davidson’s Tily Kettle (which I cannot find on the Picture Gallery website). Oddly though the description for 184 (below) is the Linley Sisters by Gainsborough who happen to be Elizabeth and Mary and more neatly fit the bill. Have a look at the original and make up your mind. Could this be a little confused? Next is the first of the Sheep created by Michael Beerens also based on the Three Boys by Murilo. The Beerens is spread over three houses, the other two boys (Sheep) are on 173 and 175 (and not 175 and 177 as the interactive map suggests).

Note the art next door; no idea what it is but it kind of works

Stik, definitely but interpreting a Gainsborough?

Beerens no 1 First of three boys 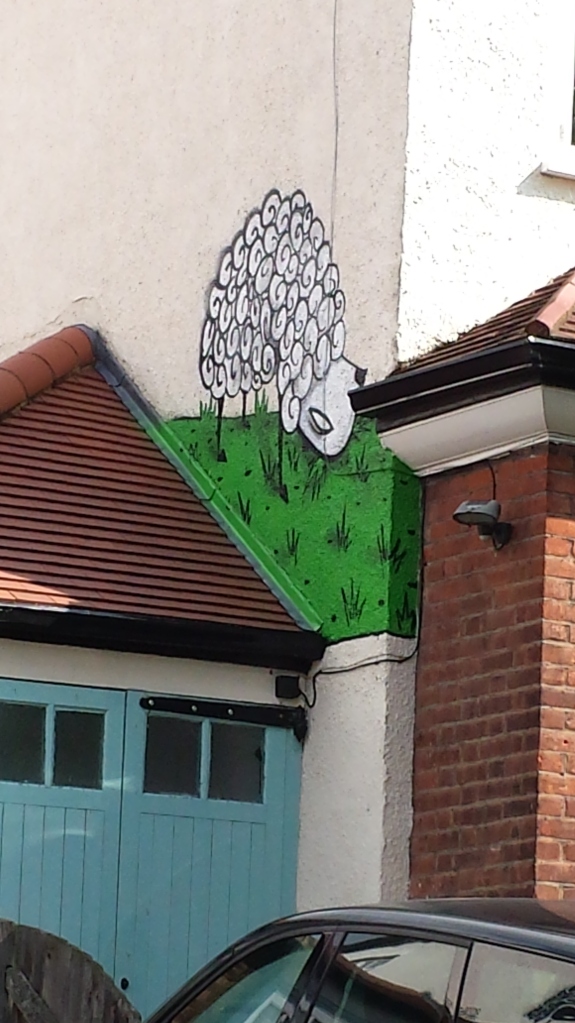 7. Court lane has one last Stik, at 184. This, we are told, is based on the Linley Sisters by Gainsborough. But see above. Most likely they both are. 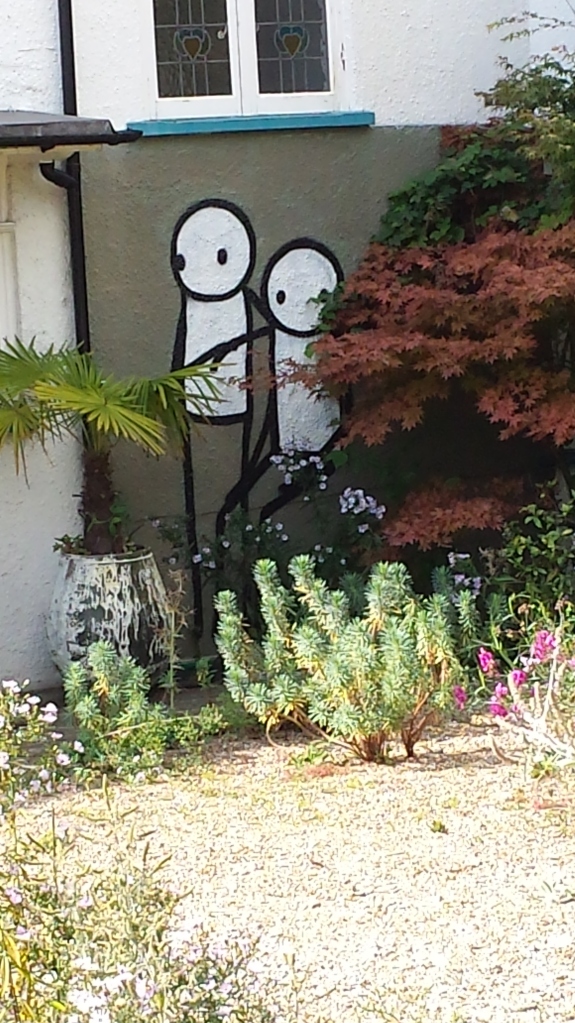 Maybe it is the second interpretation?

8. From here you continue up Court Lane to the junction with Lordship lane. According to the map you can go right to find a work near the Horniman Museum but as this really Is out of the way and the map suggests you need an appointment we passed this one by. Instead we turned left, towards East Dulwich. By now you will have walked some two and a half miles, starting at Gipsy Hill. If you decide on the bus break from the Paxton then it cuts off a mile. Overall, from the Picture Gallery to Peckham, where this tour ends, it is about 7 miles. Just so you know. Oh and some will wonder at the constant references to cafés and toilets. Well the two tend to be sequentially important and my wise mother’s words have increasing relevance as I age: ‘never pass a toilet’. Oddly she never said the same about a cafe but then again cafés back in her day weren’t as common and eclectic as today’s selection.

My name is Geoff Le Pard. Once I was a lawyer; now I am a writer. I've published several books: a four book series following Harry Spittle as he grows from hapless student to hapless partner in a London law firm; four others in different genres; a book of poetry; four anthologies of short fiction; and a memoir of my mother. I have several more in the pipeline. I have been blogging regularly since 2014, on topic as diverse as: poetry based on famous poems; memories from my life; my garden; my dog; a whole variety of short fiction; my attempts at baking and food; travel and the consequent disasters; theatre, film and book reviews; and the occasional thought piece. Mostly it is whatever takes my fancy. I avoid politics, mostly, and religion, always. I don't mean to upset anyone but if I do, well, sorry and I suggest you go elsewhere. These are my thoughts and no one else is to blame. If you want to nab anything I post, please acknowledge where it came from.
View all posts by TanGental →
This entry was posted in art, buildings, Dulwich, London, miscellany, sculpture, street art and tagged Ben Wilson, Dulwich, Dulwich Picture Gallery, MadC, Michael Beerens, Patrick Delgardo, Peckham, Reka, Stik, Street Art, Thierry Noir. Bookmark the permalink.