Another prompt from Charli Mills, this week involving signs. One of my favourite movies, The Life of Brian, has this to say on signs. I probably can’t do any better.

Anyway this week we focus on the influence of the zodiac.

September 10, 2014 prompt: In 99 words (no more, no less) focus on the personality traits of a character informed by the zodiac. It can be a revelation of how he or she acts or a focus on behavior because of personality traits. It can be a relationship ruled by the stars. You can have fun and exaggerate, or keep it subtle and refined. You can use zodiac terms or not. 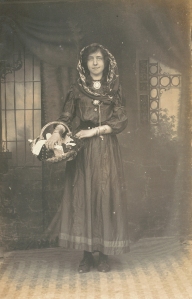 My grandmother as a young woman, pre WW1

Which is a novel concept for me. My paternal grandmother, my ‘Nana’ was the only member of my family who looked at a horoscope with anything other than cynicism. She was the first hypochondriac I came across, complaining of something called ‘her rheumatics’ and needing to be warmed by a fire even on the hottest days. She babysat the Archaeologist and me at her little council house in Caterham on many occasions, times I loved. She taught me chess, she loved any board games and jigsaws. Her house was built into a steep slope and the garden at the back so overgrown that the Archaeologist and I must have been 7 or 8 and had been exploring for years before we found there was a back lane at the top of her garden. I wrote a book set in this house and garden way back – one day I might dust it off, but just now, let’s say I was still learning the craft. 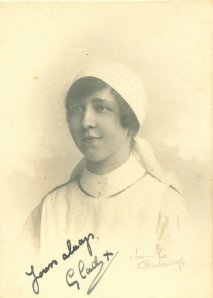 There was also an Andersen shelter in the garden. A bomb shelter from the war that my grandpa and father had dug and built. It was the best den ever, even if I had more rusty scratches from that than any number of tangles with barbed wire from exploring the fields around and about.

Sorry this was meant to be about signs. She read her horoscope from the Daily Express, holding onto the bad news like a flotation aide. Good news was scoffed away. Isn’t that the point, I wonder now? You are either someone who wants a scare or someone who wants cheering and the believability of the daily mumbo-jumbo depends on your personality as much as anything.

The Nana I knew: seated in the sun

I may not have much zodiacal experience but I’m aware of other signs. Real ones like budding trees hinting at Spring and browning leaves telling me to pull out the coat and thicker duvet for the onset of Autumn.

I’ve played in countless sports teams whose members believed in signs, in superstitions, in damned luck. And I know enough people of religion to have been informed that such and such is a sign that their deity is at work.

For me the only signs that matter are the ones in people’s faces, in their body language. How am I doing? Are you ok? Was that funny or tasteless? (this is a common sign I seek from the Textiliste and is delivered by the magic of one eyebrow).  People, in all their joy, love, discomfort, anger and contradictory confusion tell us so much without words  (as does Dog, of course) that seeing those signs and trying to interpret them is critically important and monumentally difficult.

Some people swear they can read another; he or she ‘ is an open book’. Something is as ‘plain as the nose on his/her face’. But, and this is a large and often ignored caveat to the reading of signs in expressions, in body language: people can be too willing to ascribe intentions to an actions, to a sign of some kind. Some can, albeit innocently, and others do, sometimes mischievously, misinterpret such signs. Signs are useful but are not enough. That’s why we have language.

And what of Mary and her family? If you want to keep up to date with what’s been happening you can read her story in flashes here.

Mary sat in the pew, wishing she was anywhere but here. Her daughter leant on Paul, her father’s, arm. She ached not being able to comfort Penny but the truth was she didn’t care Angela was dead.

Three rows in front, Rupert shook in his grief. In half-profile, he looked like her father. His father too, though she hated that.

He turned and mouthed, ‘Thank you.’

Paul had called him typical Cancer, more worried about Penny than himself. She thought him a self-serving little shit. She stood for a hymn, willing this charade over. She was a typical Scorpio.

My name is Geoff Le Pard. Once I was a lawyer; now I am a writer. I've published several books: a four book series following Harry Spittle as he grows from hapless student to hapless partner in a London law firm; four others in different genres; a book of poetry; four anthologies of short fiction; and a memoir of my mother. I have several more in the pipeline. I have been blogging regularly since 2014, on topic as diverse as: poetry based on famous poems; memories from my life; my garden; my dog; a whole variety of short fiction; my attempts at baking and food; travel and the consequent disasters; theatre, film and book reviews; and the occasional thought piece. Mostly it is whatever takes my fancy. I avoid politics, mostly, and religion, always. I don't mean to upset anyone but if I do, well, sorry and I suggest you go elsewhere. These are my thoughts and no one else is to blame. If you want to nab anything I post, please acknowledge where it came from.
View all posts by TanGental →
This entry was posted in flash fiction, miscellany, writing and tagged flash fiction, signs, zodiac. Bookmark the permalink.